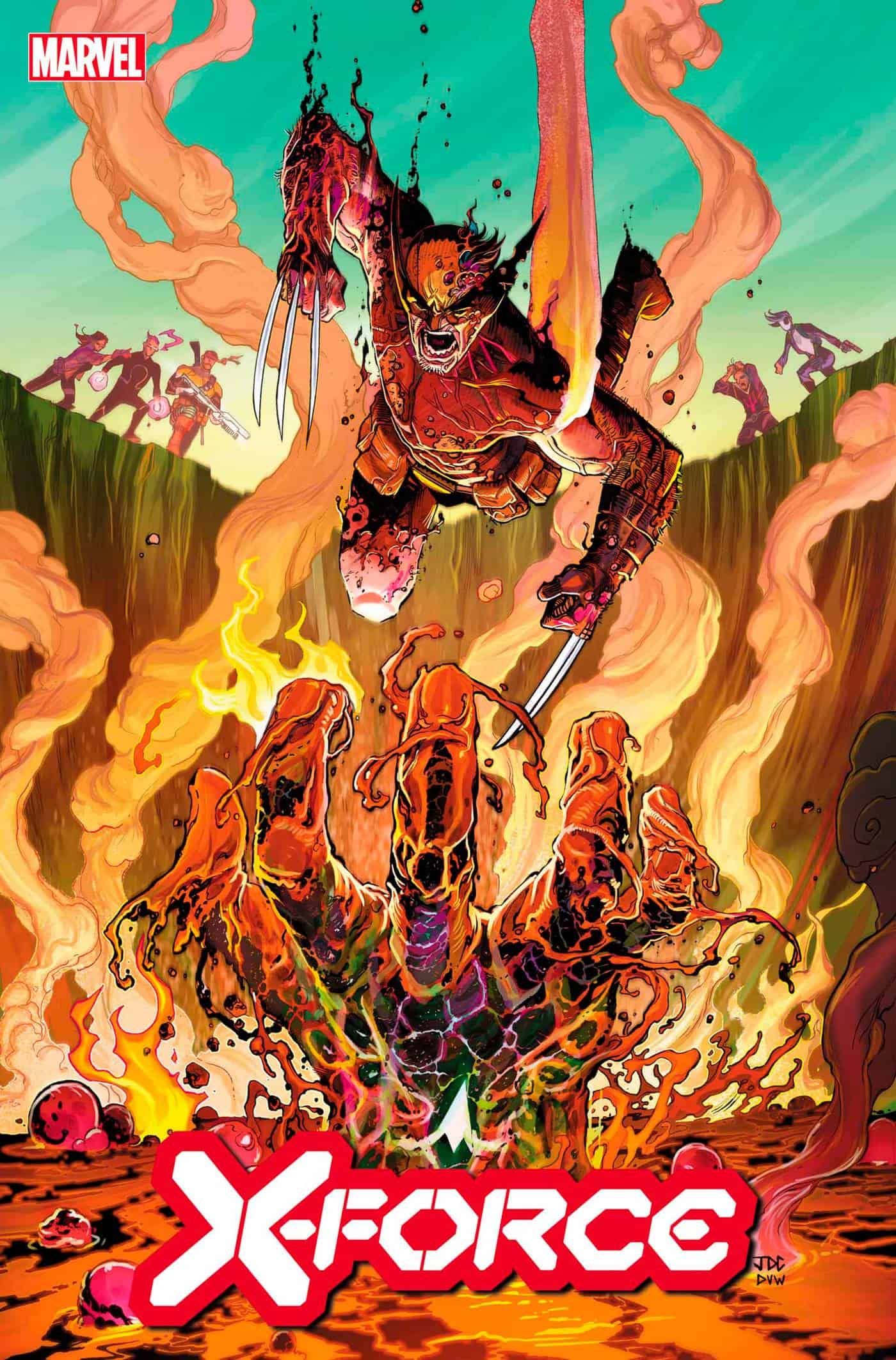 All Logan wanted was a nice, quiet day at the beach. To surf, relax... just a little... and maybe not think about all the terrible things X-Force is tasked to do in the shadows to protect Krakoa.

The most odd – yet oddly affecting – story in this volume of X-Force so far concludes. What started as a simple break from the espionage sturm und drang and moral gray areas that have defined this volume thus far, has turned, gently, into a meditation on loss, grieving, and the nature of freedom.

A relatively simple tale of kidnapped Krakoan babies turns out to have multiple layers of depth to it – if you know what you’re looking for.

Logan, for his part, knows he must fulfill his mission and recover the stolen babies from new frenemy Pike, but despite his duty, his heart isn’t truly in it. He envies Pike’s ability to not only be free, but feel free as well – which is a feeling Wolverine will never know. He’s seen too much, done too much, lived too long. The chains that bind him will always be there, and he knows it. And the fact that writer Benjamin Percy knows that reveals a level of character depth and understanding that instantly puts him among the ranks of greatest Wolverine writers of all time, up there with Claremont and Hama. That’s not something I say lightly.

This isn’t just Wolverine’s show, of course. This is X-Force, after all, so several other sundry players are lurking: Black Tom, Domino, Sage. But it’s Quintin Quire who shares the spotlight with Logan this issue. Quire, still nursing the sting of being dumped by Stepford Cuckoo Phoebe, reveals his own inability to cope with loss, grieving the death of his first truly meaningful romantic involvement. But the degree to which Quire has grown is remarkable. The former rebel without a cause (and many a “Magneto Was Right” t-shirt) might have at one time devolved into childish antics and misdirected, juvenile anger as a coping mechanism. But in Percy’s incredibly poignant hands, he’s grown as a person, and all of that youthful indignation has been replaced with the discomfort of a young man who knows better who he is, but hasn’t quite finished growing up yet. His talk with Jean is far beyond a simple pep talk – it’s full of introspection and even pathos that, until even recently, we might never have thought to see from the one-time leader of a riot at Xavier’s. It’s frankly rare that we’re treated so such monumental character growth in a superhero comic. I hope this doesn’t mean Quintin loses his edge, but if losing that edge means the growth of a beloved character in real, three-dimensional ways, that’s a trade-off worth having.

Continuing his winning streak from last month is new series penciller Robert Gill, who brings a somber, more muted tone to his pencils this issue, really shines with his ability to sell body language and posture – crucial in any visual storytelling, of course, but of particular importance when crafting a character-first story like this one. I sincerely hope Gill sticks around, because this level of nuance – the ability to convey feelings and thoughts without relying on dialogue or narration – is a crucial counterbalance to this comic’s usual black ops darkness. Gill’s pencils are further empowered by Guru-eFx’s sumptuous  colors, which just like last issue, are a visual feast on all levels, escalating nature’s own palette to marvelous effect.

X-Force #26 is a quiet masterpiece in character-first storytelling, introspective and wise in its study of two of the X-Men's most cantankerous personalities. You'd be wise not to miss this one.