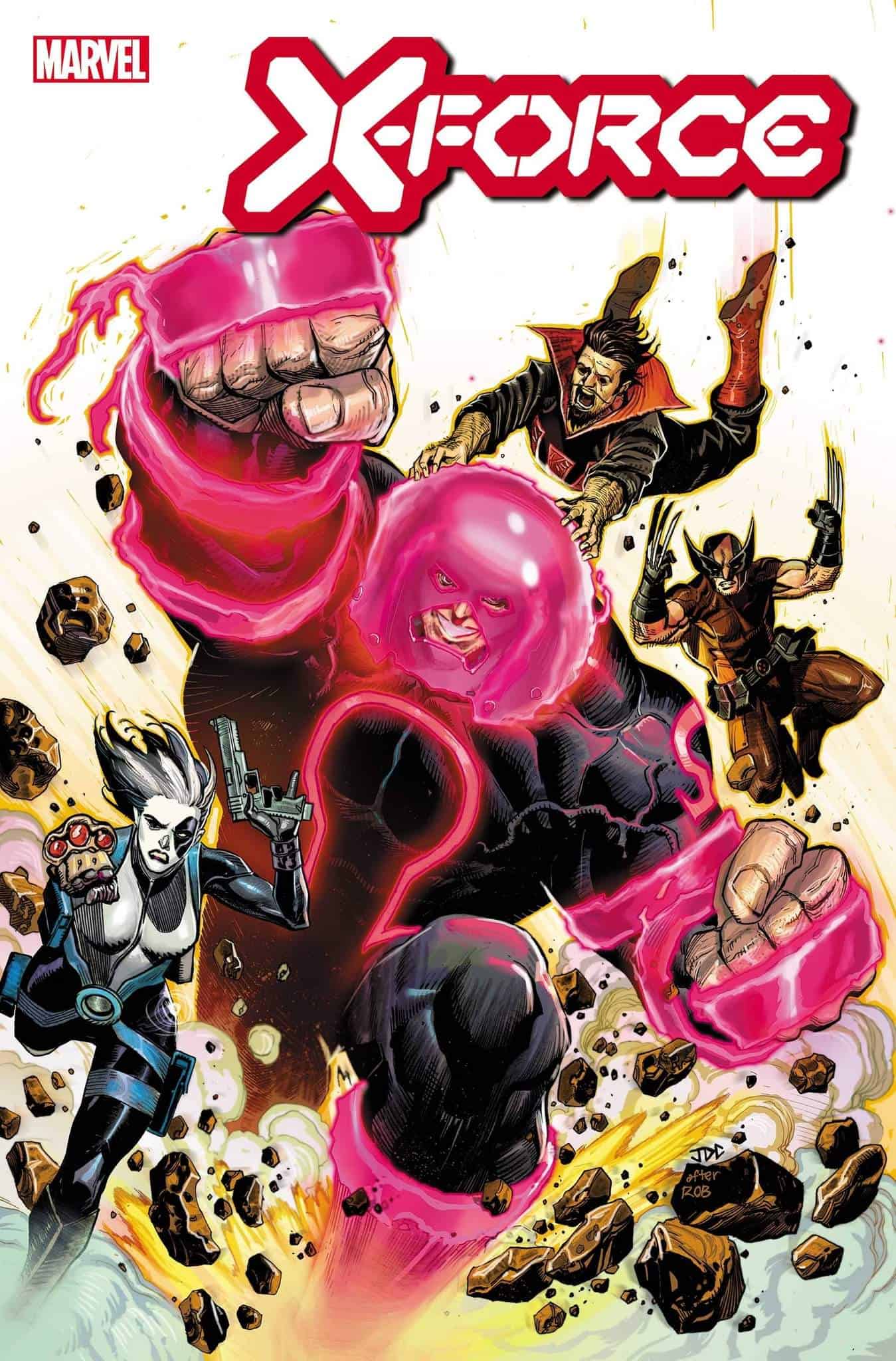 The newly-sentient Cerebro unit currently running amok around Krakoa is treating the island like its own personal buffet. Can X-Force stop it before it catches a snack big enough to destroy the Nation?

Benjamin Percy’s knack for combining body horror and philosophy makes this issue feel like what you’d get if ‘The Trolly Problem ‘ episode of The Good Place had been directed by David Cronenberg. This series definitely isn’t for everyone, but the author knows his audience, and it’s a sure bet that fans of the series will be satisfied by this installment.

Aside from the horrifically delightful sight of an adamantium spider’s web peppered with skull-scooped bodies, we’re treated to Kid Omega’s disturbing approach to dealing with his latest existential crisis, as well as a rather remarkable conversation between Sage and Omega Red.

Quentin’s unsatisfied with himself for probably the first time in his life, and he’s looking for answers in a pile of cloned bodies that he pilots around like avatars in a video game. This is an interesting, and realistic, problem for a person Quentin’s age to have— even if most people between the ages of eighteen and twenty-five don’t have access to giant clone puppets. He’s learning the hard way that he doesn’t have all the answers, and that knowledge is causing him to question every part of his identity. This is very clever, beautifully symbolic writing.

Sage is also having a crisis of identity. She’s been using herself as a computer for so long that the humanity she’s suppressing is coming up again in very unhealthy ways. Yes, her powers are based around her computer-like brain, but she isn’t a machine, and treating herself like one leads to making mistakes. The fact that she can recognize these unhealthy patterns of behavior, and use them to try to connect to Omega Red, is both fittingly clever and deeply sad. It’ll be interesting to see what comes from their conversation.

On the other side of the spectrum, the rogue Cerebro unit is fully aware of its purpose and it is using that awareness to self-actualize in a way that is reminiscent of Pinocchio’s desire to be a real boy — but with loads more bloody mayhem than a single squished cricket. These are all connected stories, tethered to the same anchor, and they’re absolutely beautifully executed.

Robert Gill’s art is well rendered: detailed enough to add to the compelling nature of the story without ever being confusing or distracting. There’s a lot of character to this art, and it’s genuinely fun to look at. Guru-eFX’s colors are deep and clear, contributing to the living feeling of the art.

This is a fun, bloody, thematically complex story, beautifully illustrated and well-told. I just can’t wait to see what happens next.

This is a fun, bloody, thematically complex story, beautifully illustrated and well-told. I just can't wait to see what happens next.