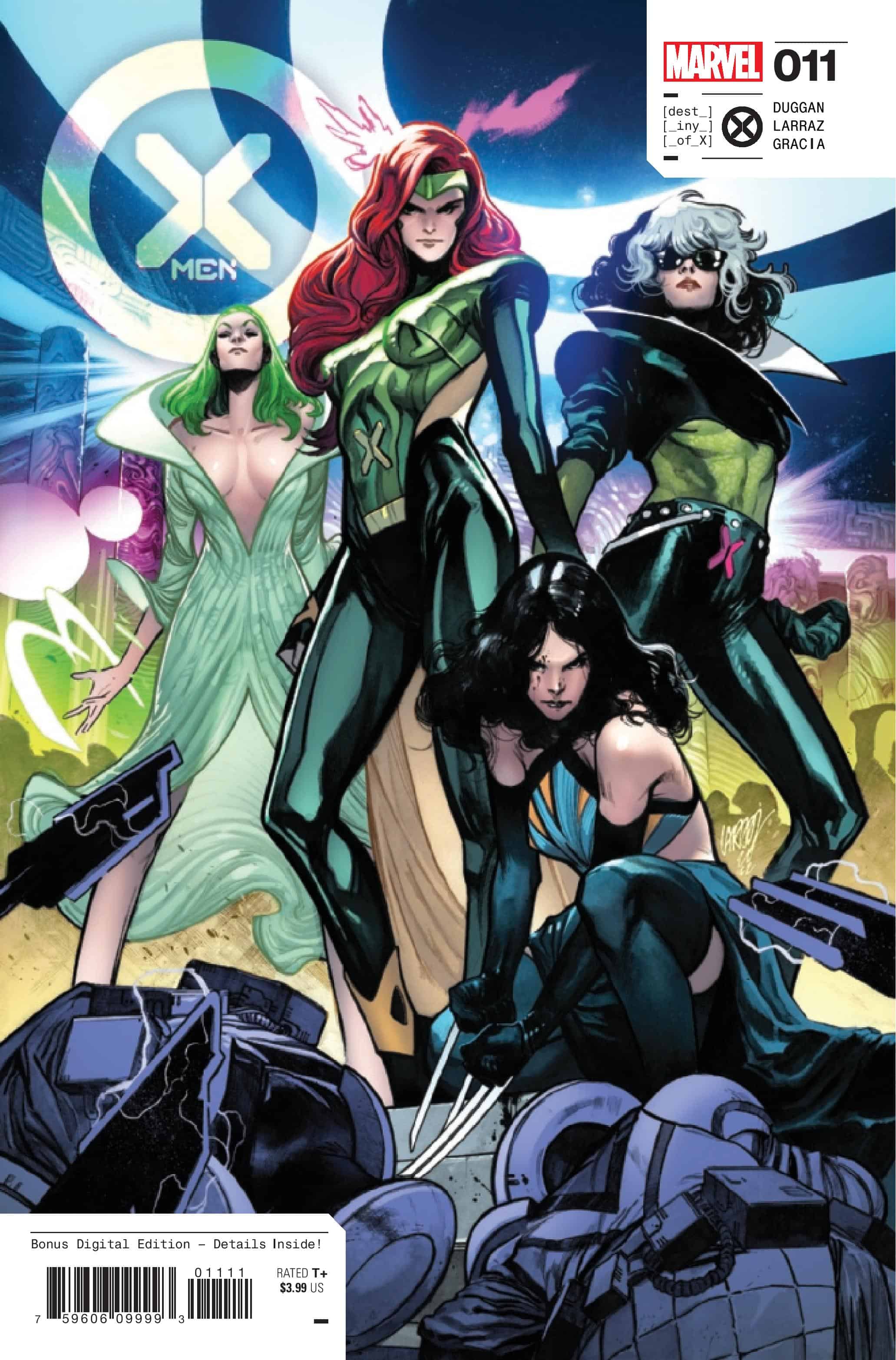 HIGH ROLLERS! The women of the X-Men are heading for the hottest action in the galaxy…Gameworld! But if it’s true that the house always wins, our X-Ladies might be in over their heads…

Step right up! Ocean’s Eight meets the ladies of the X-Men meets Cordyceps Jones, and it’s a fun little ditty. It’s a night on GameWorld, and the ladies are putting all of their money on black! I’m a dealer at a casino, so I totally know what I’m talking about. Not only that, but Cyclops and Synch bring the fight directly to Dr. Stasis, and we get a heck of a cliffhanger. Where do we go from here? I don’t know, but let’s get to the things I liked about the issue.

I loved seeing an issue focused on the women of the team, even though I only enjoy reading about two of the four cast members, and they were rendered fabulously. Pepe Larraz is back with this issue, and he has brought some amazing images with him. Everything from the fashionable entrance, to Cordyceps popping up in the strangest of places. Just fabulous. Mix in the palette of Marte Gracia, and it was a yes, yes, yes from me. While only there for a couple of panels, Polaris was the biggest draw for me, as she has from the beginning of this run, and her entrance was absolute perfection.

Another highlight for this issue was the continued growth of Synch, who has been a voice that has been missed from the mutant world for such an unbearably long time, and to see him become such an integral part of this team has been a very big plus for me. Sure, I’m still very ugh when it comes to Synch wanting to join the team to be close to Wolverine, but the love that Duggan has shown for Ev is such a great thing to see.

Now I need to talk about the things I didn’t like, and unfortunately there were a lot of things that I didn’t care for here. First up is reusing the Hellfire Gala looks from last year. Yes, I understand that this isn’t a fashion magazine, it’s a capes and tights superhero book, but it was a great stage to stretch Pepe’s legs here, and I was just let down.

Next was the complete lack of Sunfire, who has been a non-entity almost this entire run, so the one page appearance was just a slap in the face. Sunfire has been the abandoned Japanese stepchild of Marvel, so seeing him put on the main team was inspired. Unfortunately there has been almost nothing done with him.

Finally, Everett’s use of Jean and Laura’s powers from galaxies away. If you’re going to explore his powers, and the limits of what he can do, let us know what you’re doing. Why would he synch with Jean and Laura, when there’s an island full of mutants with similar power sets, so why would he link up with someone that far away? Is it because he’s familiar with copying their abilities? That’s fine, but just let us know. We’re here for it, so give it to us.

Finally the last thing I didn’t enjoy is it’s nearly a year in, and still very little has happened. In the past I’ve praised the book for the development of Lorna’s role on the team, and giving her such a delightful personality here, I’m always drawn to every scene she’s in, but nothing is happening. It’s just long drawn out snippets with every issue, which some are definitely more interesting than others, it’s just less and less with each issue. I’m just losing interest at this point. I hope the pay off will make up for the glacial storytelling being done here.

Another fun issue, but the fun seems to be wearing thin with the lack of movement of the plot is starting to make the book drag. The lack of development on much of the cast is also becoming an issue. Eleven issues in, and we barely know many of them, and how they feel being the public face for the X-Men.