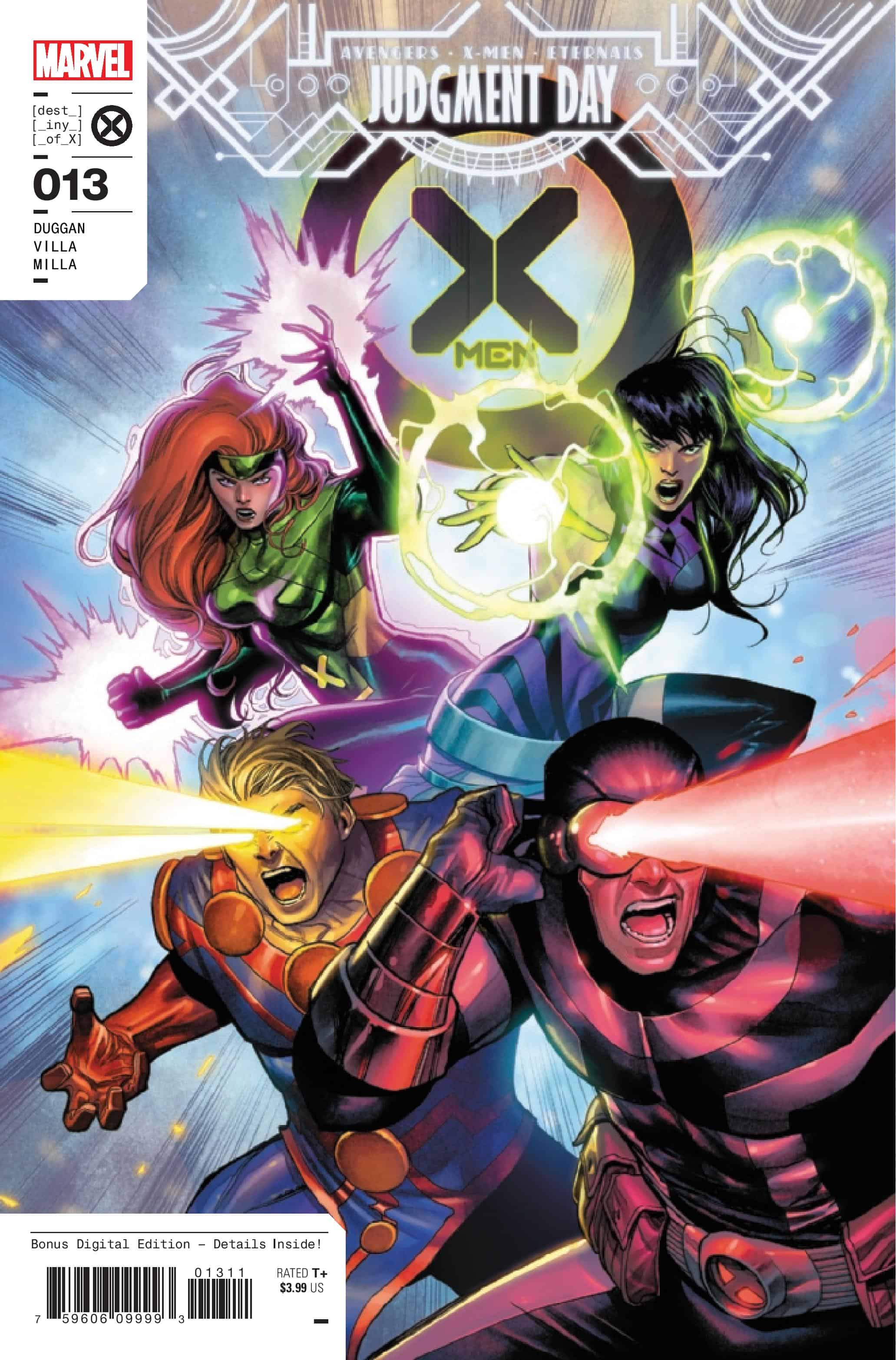 THE INHERITORS OF THE EARTH? The mutants are the next stage of evolution. Evolution depends on a mutation of genes – the genes of the offspring deviating from their progenitors. Some would call the X-gene EXCESS deviation. Those people are gonna need to be taken down a few pegs.

It’s the 13th issue and the first issue of the new team that debuted in the Hellfire Gala and the X-Men’s side of the big brouhaha in the AXE event (read about the Eternals side in the AXE Death of the Mutants mini out today!) and it’s a bit of a mixed bag. As with all event tie-ins, but between this issue and the Death of the Mutants, these two issues add so much to the story from the second issue of the event. Gerry Duggan’s joined by rising star artist, CF Villa, are the team here, and they’re off to a rather uneven start. Let’s get down to it, shall we?

Duggan’s X-work has some definite highs and lows, with his strengths being the development of certain cast members, while others provide minimal development. Since it’s the first issue with this team, I’m not going to assume that’s what’s going to happen here, so I’ll save my criticism until we’ve had a few issues and beyond this crossover with regards to this new team. I’ve got high hopes to see some of these characters featured here with a new lease on life while mourning the loss of Polaris and Sunfire, who kept me coming back for more month in and month out.

One thing that’s been one of the most consistently great beats has been Duggan’s handling of Jean Grey and her return to the confident matriarch of the X-Men. X-fans had suffered from her departure at the end of the groundbreaking run by Grant Morrison in 2004 until her return in the 2018 mini, Phoenix Resurrection: the Return of Jean Grey, and has remained a mainstay ever since. Flash forward to the beginning of the Krakoan era, and we see the X-Men in a brand new light. Some were getting completely redesigned looks (Kate Pryde’s new duds) to be refreshes of a past classic (Cyclops revamped Summers revolution era costume), but Jean did it one step more. Not only was Jean returning to her original costume, which wasn’t the school’s black and yellow jumper, but her green mini dress, with a yellow pointed mask and dishwasher yellow gloves, and it seemed like it was a slap in the face. Marvel had gone out of the way that Jean no longer needed to be hampered by the trivialities of a codename.

She no longer was the bright-eyed girl who was traumatized into activating her latent psionic powers upon witnessing the death of her best friend, Annie Richards, nor was she the cosmic bringer of death and resurrection, the Phoenix. Jean was her own woman, and she was ready for that next phase of her life. So to see her revert to such a dated era in her life was rather off-putting for her fans nonetheless. We were told countless times that the reversion was necessary for the story they had in mind. A simple enough explanation; unfortunately, it never happened. Jean’s development felt just a tad…on the safe side, so we fans were rather let down.

Fortunately, this is where Duggan came in. Duggan’s Jean was self-confident, nurturing, and a leader in her own right. Sure, Duggan’s had Jean do some rather duplicitous actions (like her willingness to just tamper with others’ decisions), but she wasn’t afraid of her power. She was the woman of tomorrow, but with her foot firmly planted in the past. This Jean was no longer the girl with the school yard crush on the quiet kid but sure of herself. Luckily this Jean showed up here, but the cast seems to be an afterthought. Other than Scott, Jean, and Everett, the rest of the cast seemed off. Duggan hasn’t seemed to nail the team’s characters’ voices as yet, and Firestar’s addition seems rather tellingly. The fight scene was decently exploring from the events that happened a few days ago, but we just needed that extra oomph.

CF Villa joins us on art duties, and his work here shows much growth since his time on Black Cat. I really dug his work on Cat. We had some great artists with Jed MacKay, but Villa might have been one of my favorites from the run. His character work has been his biggest strength in the book, and it continues here. There’s a sense of movement and fluidity that works well with this type of story. The characters aren’t stuck in these awkward, stiff poses. I especially enjoyed his Firestar and Jean, and I can’t wait to see Firestar in her freshly designed costume. While I’m not sure if he’s going to be the new ongoing artist taking over for Larraz, I hope he sticks around for a few arcs.

The first issue to the new era, with a new team, and it’s off to a decent start. The dialogue’s kinda clunky, but Villa’s art is great here. The new team is pretty much nondescript at this point, so I’m excited to see what Duggan will give us as time moves on.