X-Men #17: Survivors who are the fittest… 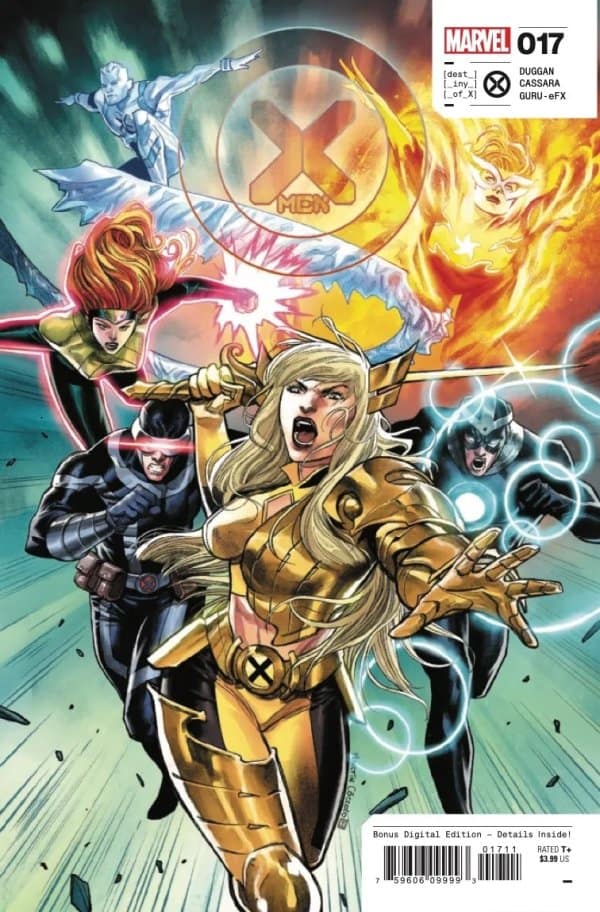 THE BEST LAID PLANS… As the new X-Men team brings deals with a seemingly unstoppable foe, one X-Man wrestles with the fact they've gone way too far, and another is shaken by unexpectedly getting exactly what they'd no longer allowed themselves to dream of.

Gerry Duggan and Joshua Cassara finish their first two part story following the events of the Eve of Judgement storyline, and it’s the mutants who have returned to the Vault where Forge, and a suit made from Caliban’s…face, as they attempt to save Darwin from capture, but as seen at the end of last issue, they found Laura instead. Will Forge and Caliban save the day? Or will they be lost to the Vault?

As with the last issue, Duggan is given the chance to explore a character we don’t normally get to see front and center, and give us an insight into who they are. Unfortunately Duggan’s characterization of Forge has been…kind of a butthole. He’s just a jerk, and not someone I’d be interested in reading about. I’m hoping to see some character growth here, because otherwise why take the time to give him the page time if he’s only there to push Cyclops’s buttons? It was nice to see some development regarding Forge, for a multitude of reasons, one of which being his status as a Native American. We currently have four Native Americans who are on X-teams, which has to be the largest concentration of indigenous people active in a major comic franchise. They’re roles here could be Instrumental in giving voice to one of the most maligned groups in existence

Forge has always rode the line over the course of the last 40 years on his existence, where he’s come at odds against his fellow mutants, first creating a weapon that stripped Storm of her powers for the better part of a decade, to taking over the government sponsored mutant group X-Factor, where they slowly began to become a prototype for the Hound Program, that first debuted in the 1981 seminal X-storyline Days of Future Past, that used the mutants to track their fellow mutants. So having him here, I hope that we see someone give Forge a voice that isn’t just the go-to guy whenever you need something sci-fi-iffic for the story. He certainly fills a role that you don’t often find in the mutant community, with most of the tech we’ve grown accustomed to seeing is built by him, or donated from the Shi’ar. But even with the tech he’s built, you never really see him going through the process. It’s just…there.

The best part of the issue for me was Caliban, and his role as being Forge’s impromptu conscience here, and it couldn’t be more on the nose than this. Caliban is essentially a blank slate, and most often only in the story as a tool to get from point A to point B. His gift is he can sense the presence of other mutants, so it’s clear Duggan brought him on to put a mirror to Forge’s blaise attitude when it comes to how Forge behaves towards his fellow mutants that he deigns…lesser than. I hope we see more of this as time goes by.

We do get to see Darwin’s fate, sort of, but what we got leaves the door open to further explore what he can add to the relationship between the Mutants and Children of the Vault. There’s the possibility for so much growth that will make them something more than just super powered futuristic antagonists. But the biggest wow is the realization that Lauraverine, the pre-Vault Laura, is still alive. How will this affect Krakoa? They have the same mutant alive on the island? It’s going to lead to something that will be a new situation the mutants will have to deal with.

It’s the first full mission for the newly elected team, and first up was to save Darwin from the Vault, but what we ended up with was something completely different. The story didn’t hit quite how I expected it too, but there were moments that I needed from the characters here.

X-Men #17: Survivors who are the fittest…