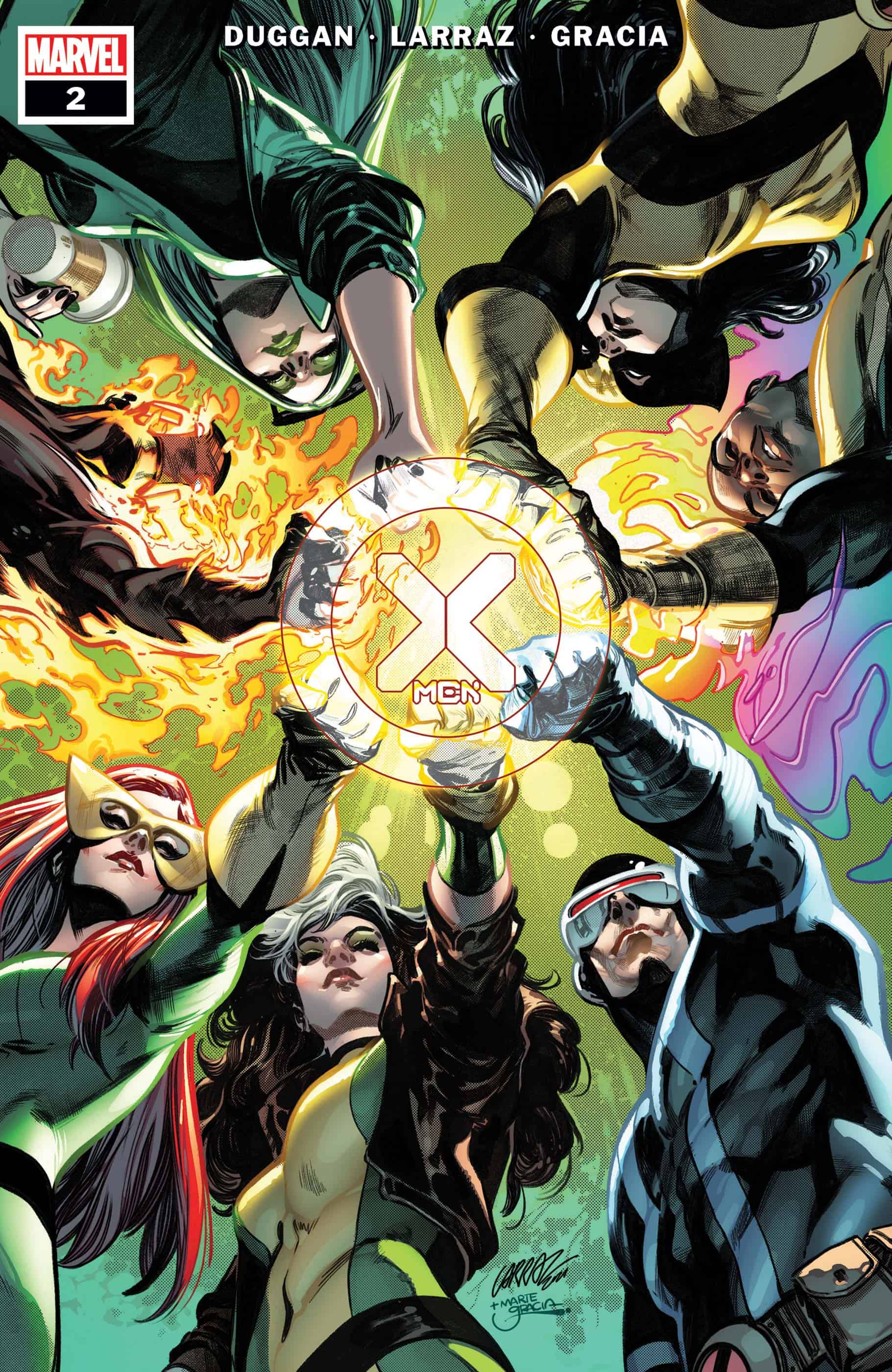 ALWAYS BET ON X! As threats hurtle toward the Earth from all sides, the fearless X-Men fight a seemingly unstoppable wave of annihilation… but even more dangerous threats lurk in the darkness, ready to strike in secret.

And we’re back… We rejoin Krakoa’s duly-elected heroes and the next threat hurled at them from Gameworld and that fungus among us: Cordyceps Jones. Normally in reviews I focus on the writing first but quite honestly, this issue, I think the art department deserves attention first. Pepe Larraz, Marte Gracia, and Clayton Cowles make this issue well worth the price of admission as they bring the absolute literal and figurative fire. Larraz gives us everything from interpersonal hijinks as Gambit invites a few buddies to play cards at the Treehouse (much to Rogue’s annoyance) to the galactic playground that is Gameworld (three-legged dancing alien can-can dancers included) to the glorious trees in small-town Kansas and the horrific nightmare of the threat this issue. Marte Gracia takes these things and breathes mood and even more life into Pepe’s art with a beautifully rich color palette that captures the glory of the setting sun across the New York skyline or uses the green of Polaris’s power to infuse eldritch menace as Jean and she combine in circuit to go deep into the heart of the darkness in search of clues to the source of the threat.

All the characters are magnificently rendered but two, in particular, stand out in this issue – Jean and Sunfire. It’s a literal blaze of glory from Larraz and Gracia as we get to see Shiro doing his thing in a brilliant burst of orange and reds. The paneling is fantastic from Larraz as he uses it to brilliant effect, be it to capture the action in a tight shot or a beautiful character splash and then to cast you back as a character explains why they are on the team in a flashback sequence made to look like the blazing flames of the character’s power set but also move your eye back to the final point on the page. This issue’s art alone gets a perfect score from me as Pepe and Marte continue to do no wrong. Clayton Cowles is as always a consummate professional and all the lettering flows superbly with the visual feast that’s laid down before us. 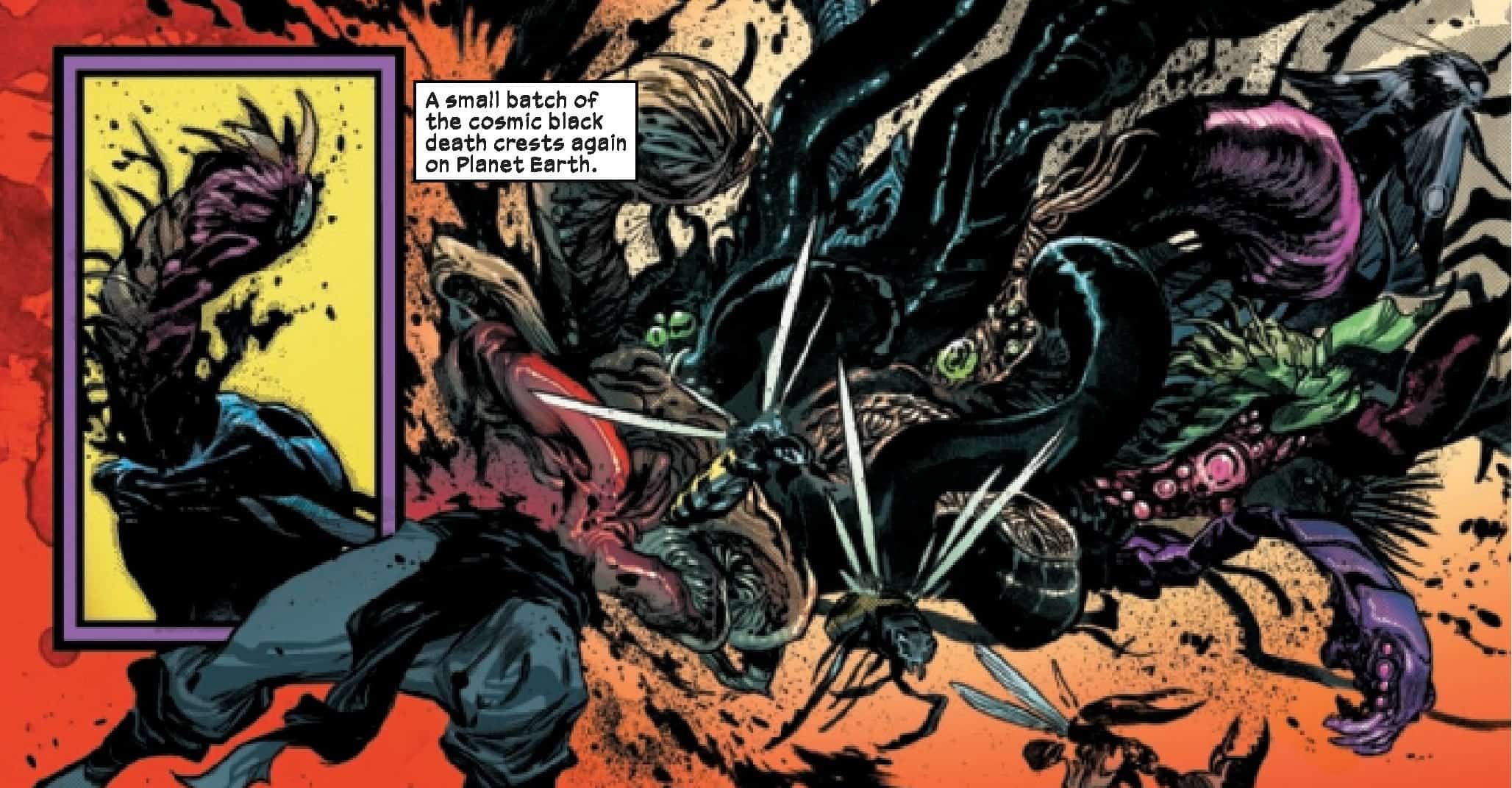 X-Men #2 is very much like its predecessor and has an almost self-contained episodic feel to it, which may bother some people who are looking for something completely removed from what happened last month as Duggan plays the long game here, pushing the overall plot forward only fractionally. The characterization is good and having a few other 616 characters there even if only for a few panels helps connect the book to the larger universe and Duggan isn’t afraid to throw in references to character history (the Rogue/Avengers unity team reference is a good example of that) while Cordyceps Jones gets probably the most entertaining dialogue early on as Duggan gets to explain how the threats are hurled so far to Earth so fast. Then just like an episode of Power Rangers the threat lands, manifests, and the team must get to it. That’s fairly formulaic but Duggan manages to make it entertaining by having the team interact with each other on a more personal level than we saw in one as well. Both Jean and Cyclops acknowledging Synch’s time and experience accrued in the Vault is the kind of touch that makes the shared experience of past issues for myself as a reader and the characters on the page feel organic and part of the larger story. Another nice touch is the interaction between the people the team is protecting and the team itself. Duggan is clearly trying to balance out and add to the idea that it isn’t just THEM VERSUS US anymore and the end scene of X-Men and townspeople sharing a moment is beautifully captured by Larraz in what is my favorite page of an issue FILLED with favorite pages. The cover is the best so far of the series that I’ve seen including the upcoming solicits I’ve seen as it evokes a Knights of the Round Table feel using a dramatic POV.

Then there’s Sunfire and his explanation of why he joined this new X-Men team. I think simply because of the limited number of pages left, I can obviously only guess, but Sunfire’s explanation seems misplaced – no, scratch that – maybe mistimed to me. It’s my own personal read of the situation but it just seems out of place and that Duggan didn’t have any other place to put it in and so there it went. It’s a credible enough explanation if you ignore the negative connotation of the minority character saying he only wants to serve (which isn’t the best  idea to use, let’s be brutally honest) and out of everything in the issue it just felt like the only thing out of place in the overall scheme of things. Conversely, though, Shiro has always been known for his arrogance and hot-headedness so the opportunity for growth and see him shine on-page is a welcome one.

X-Men #2 is a little slow to advance its overall plot, but continues to intrigue with a very solid script and absolutely perfect art execution that makes every page a visual feast. Pepe Larraz and Marte Gracia continue to define the Krakoan era with absolutely iconic art page after page.