X-MEN #4: Devils in the Night on Devil’s Night 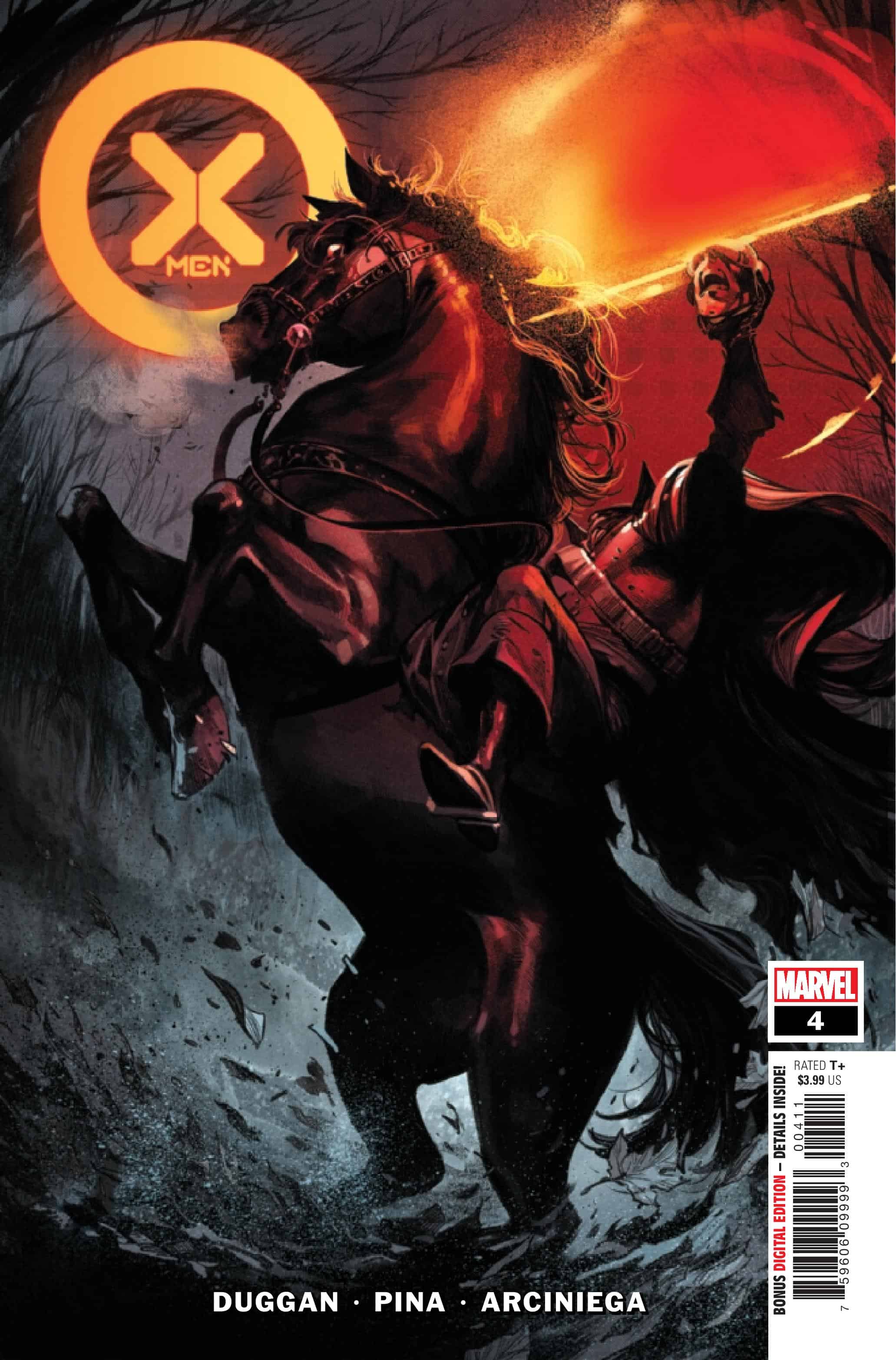 There are nightmare(s) about on Devil's Night in the New York darkness...as an old forgotten foe returns to feed off the bad dreams of Krakoa's champions and the sleeping residents of the Big Apple...

Twas the night before Halloween…

Gerry Duggan gives us an early Halloween tale (sort of) and again orientates us to the position in time when this story takes place by directly referring to the current Marvel event THE DEATH OF DR. STRANGE as NIGHTMARE returns to the pages of a mutant book to terrorize the dreams of Krakoa’s sleeping champions because there is no Sorcerer Supreme to rise up to meet him. 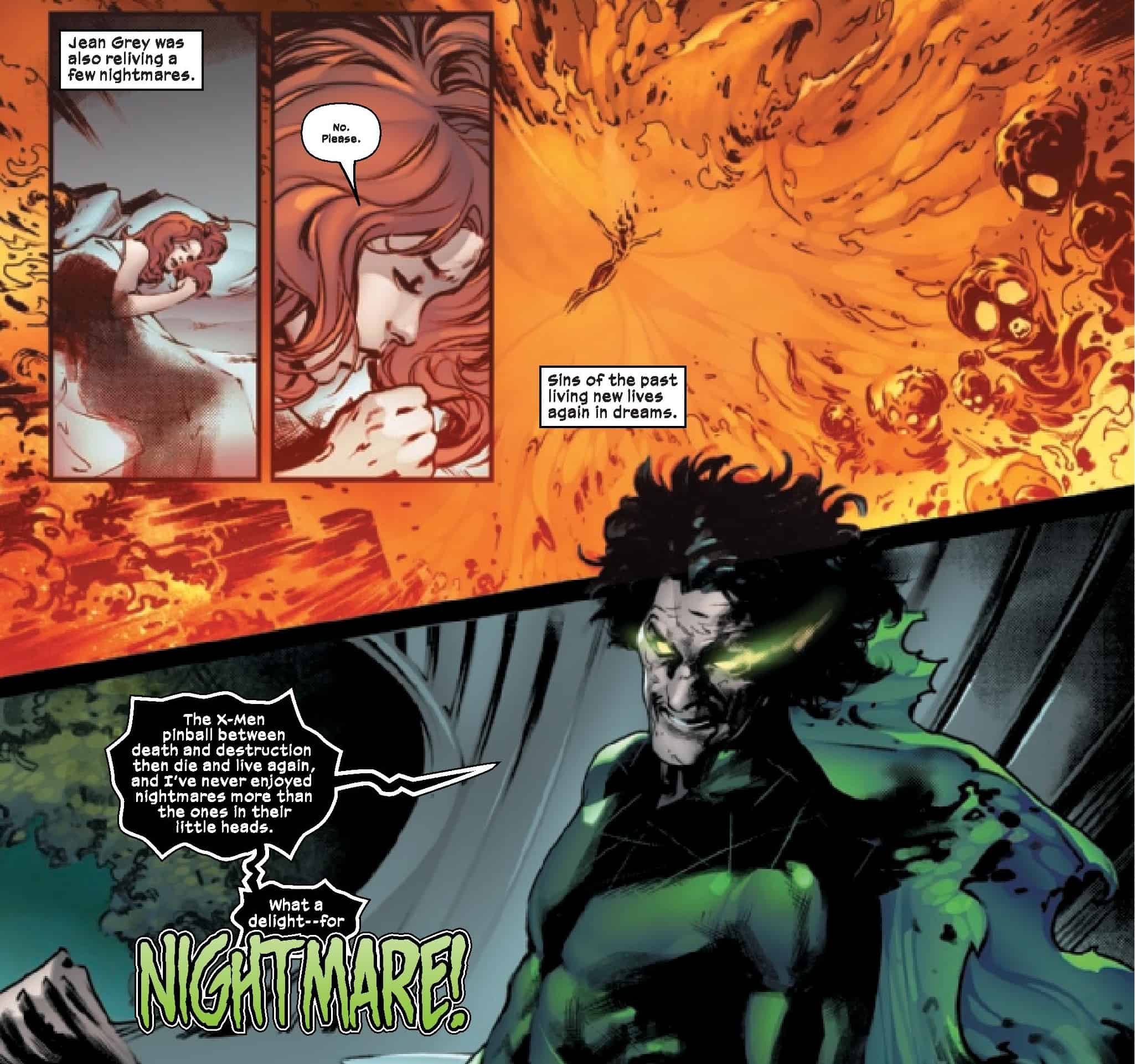 Duggan takes the time to examine several of the teams deepest fears routed in their losses, failures, guilt, and missing parts of themselves as he references multiple parts of Cyclops and Wolverine’s past (Laura Kinney will be called Wolverine in these reviews now and always bub – Editors Note) as the devilish Nightmare feeds off their bad dreams. Duggan uses everything from an inverted spin on the whole Cyclops Was Right schpiel (the second issue in a row that was referenced in a new way for those keeping track) to the whole Marvel Girl dress controversy and I’m not sure if Gerry’s trying to be meta with the dream exchange between Jean and Emma about the dress talking to the audience or not but it’s a fun bit that plays on all those considerations and past history surrounding both the dress itself and the relationship between Jean and Emma. We also get some insight into Wolverine’s fear of the unknown and the missing part of her memory from her time in the Vault and her time with Synch which is a clever little continuation to the moment the two shared in issue #3.

Then it becomes the Jean Grey show as she deals with the invasive nightmare… you don’t go into an Omega Level Telepath and Telekinetic’s head lightly and Nightmare in his arrogance seems to have forgotten what happens when you go up against mutantkind’s best telepaths (Emma Frost says Hi Nightmare) as Duggan shows What Jean said to get herself nominated to the current team and has her dispatch him in short thrift alleviating not only the team’s nightmares but also that of sleeping New York. Duggan goes to great lengths to emphasize Jean’s kindness but one has to ask the question…will this kindness in merely sending Nightmare on his way with a warning not come back to “haunt” Krakoa’s champions? Time will tell. 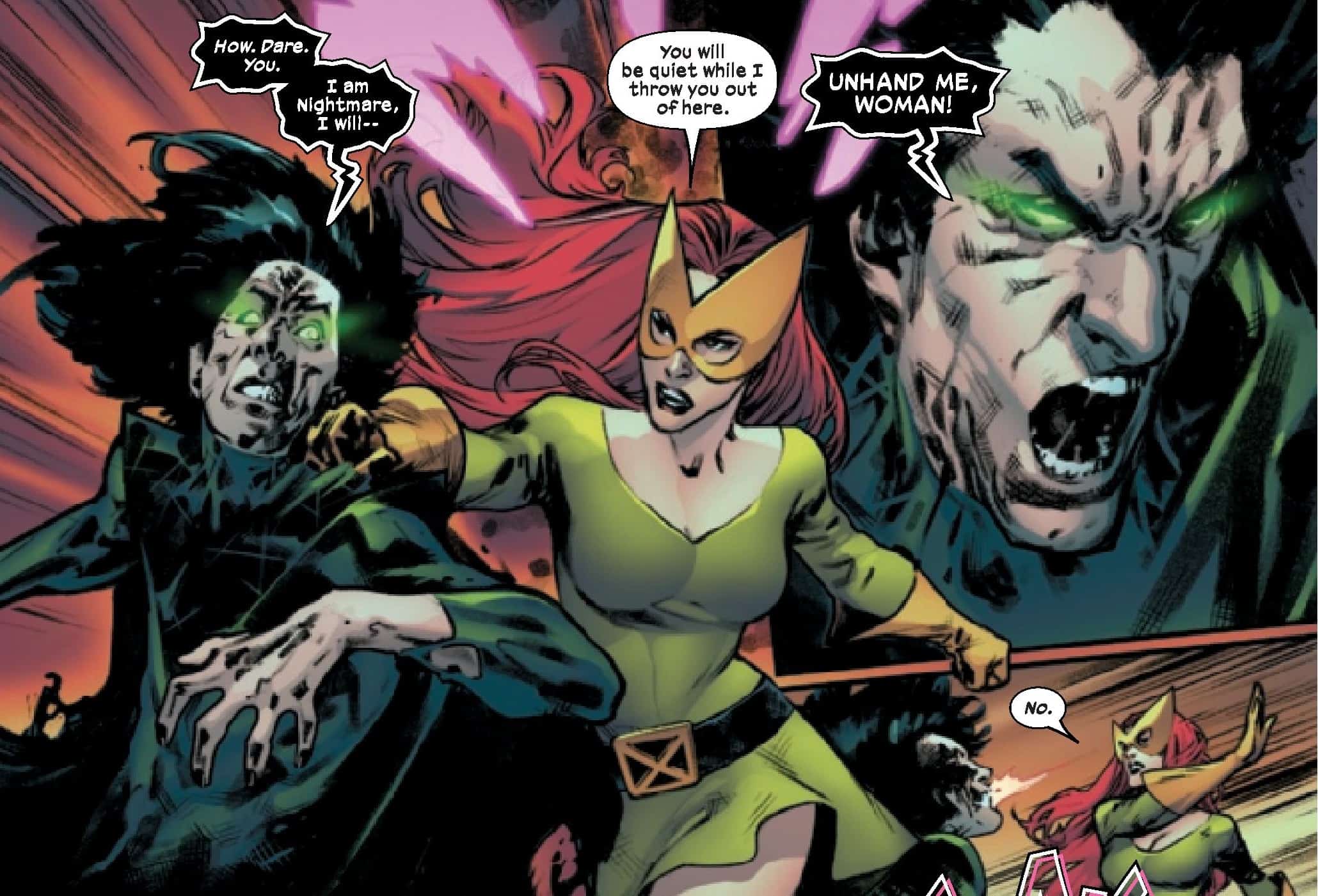 Gerry holds true to the episodic storytelling formula using the last few pages to check on other less immediate threats from both Feilong and Orchis as well as reporter Ben Urich’s ongoing dig into Krakoa’s “immortality” secret. We also get a fun data page that satirically takes aim at academic snobbery within the Orchis organization. Overall it’s a fluffy piece of storytelling which with the holiday theme in mind that is fun and engaging and will have Jean grey fans smiling from ear to ear.

I’m exceptionally impressed by Javier Pina and Eric Arciniega on art this issue. While clearly, Pina has his own style he shares a sensibility with Larraz when it comes to the use of black. Nightmare is a black and green Eldritch horror exactly as he should be thanks to Pina and Arciniega’s coloring. Everyone looks fantastic from Cyclops to Wolverine and especially Jean who has the most screen time in this story) and I don’t think Marvel could have come up with a better choice of artist to fill in for Larraz and I hope they continue to use Pina in this regard going forward. Fantastic Paneling and layouts from Pina really add mood along with the colors to sell the dreamcentric focus of the issue. Quite often fill-in art teams can make an issue feel out of place but that couldn’t be further from the truth as Pina, Arciniega and Cowles come together and knock it out of the park in the art department. Larraz’s cover is a perfect cover for spooky month and really I can’t fault the art on this issue at all

X-Men #4 is another episode where Duggan can show off his familiarity with newer and older canon, the greater 616 continuity as well as his ability to thread moments together, issue by issue, in a Halloween holiday-themed installment that's brought to life by an absolutely stellar fill-in art team whose work elevates the issue on every front. Also if you a jean grey fan this is a must own issue plain and simple.

X-MEN #4: Devils in the Night on Devil’s Night