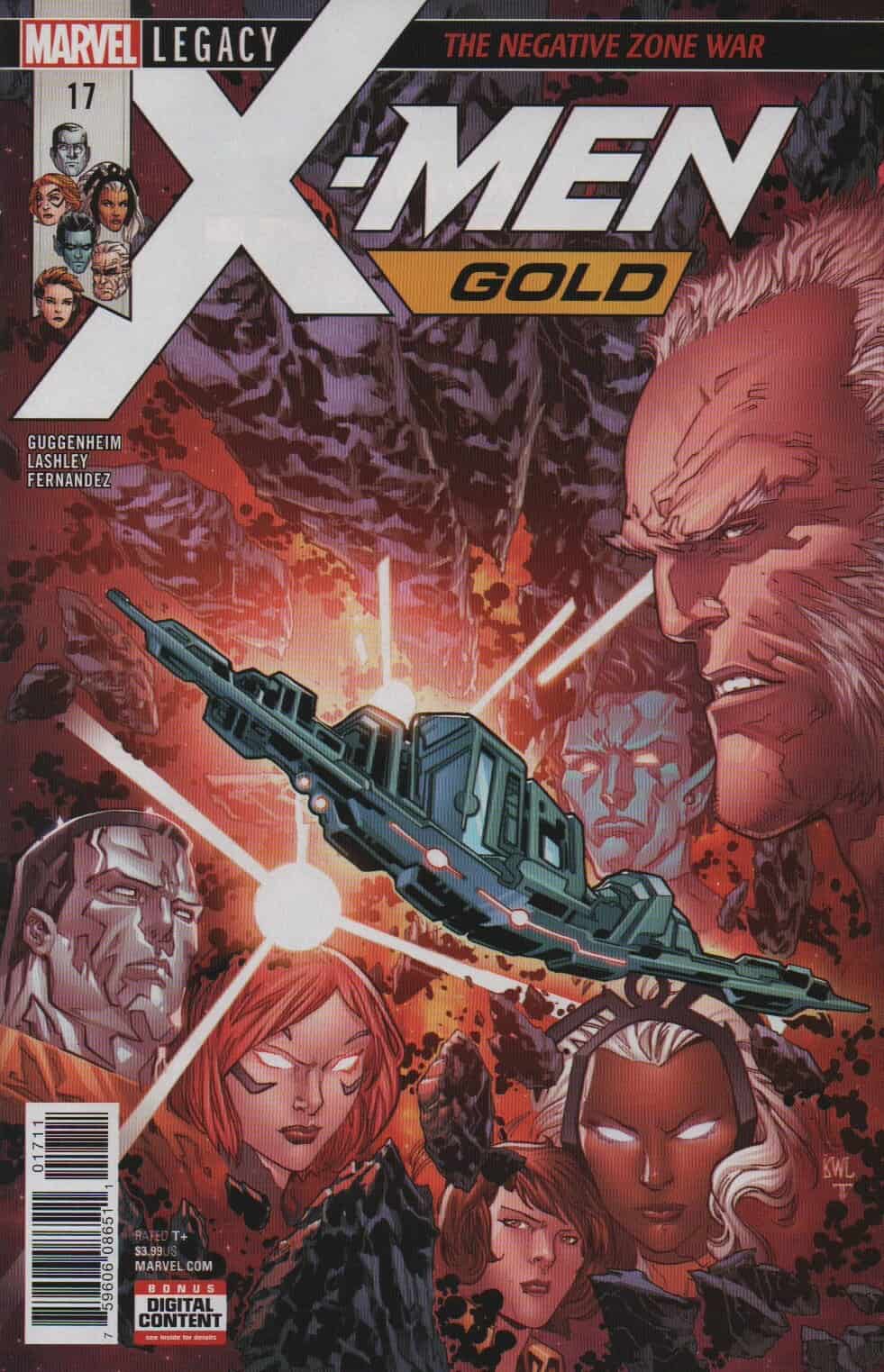 The X-Men once again hurtle into space on a rescue mission to retrieve Kitty and Nightcrawler who are captives of Kologoth. As Rachel lies grievously wounded back home, the hastily assembled team must head into the Negative Zone and deal with the alien rebels intent on sparking a civil war.

What You Need to Know:
The school has been attacked by the allies of Kologoth in a bid to return him to his home planet and lead a rebellion against the ruling faction of Dartayus. In the battle Rachel was shot down by a laser blast while attempting to save Logan from a fall, herself becoming badly wounded and knocked unconscious. Also during the attack Kitty and Kurt managed to get aboard the ship just before it departed through a warp gate back into the Negative Zone and are now captured as prisoners. Now the remainder of the team must set off to rescue their leader and team mate against an unknown alien enemy.

What You’ll Find Out:
Calling on the help of S.H.I.E.L.D. at the Triskelion Wolverine, Storm and Colossus are joined by Armor and Ink. All clad in state of the art Forge designed tactical field outfits complete with universal translators, or costumes as Logan calls them, Storm reminds Wolverine they may be necessary. As Ink doubts their capability to translate the aliens dialect Logan decides one problem at a time is enough to worry about. Forge has discerned the attackers came from within the Negative Zone and survey the vehicle that will take them to their destination as they discuss the situation with Blue Marvel who muses that he pities those the X-Men are gunning for as the team heads off without a moment to spare to save their friends. 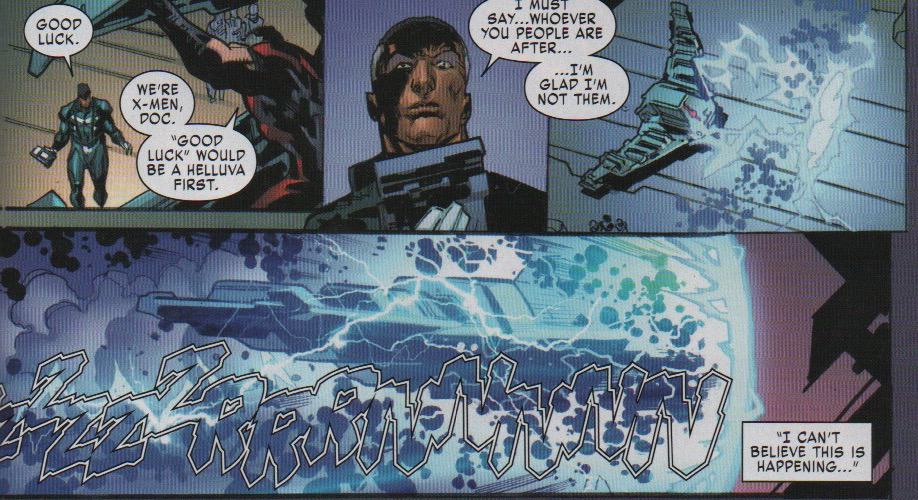 Back at the Xavier Institute Amara and Cecilia Reyes are monitoring Rachel, who is lying unconscious in bed and Amara assures Dr. Reyes that Cecilia helped her once before and she is sure she can do it again. Dr. Reyes reminds her that the last time it was Rachels mind that was damaged and that she fixed herself. This time her body is the issue and it is broken probably beyond her skill to manage. 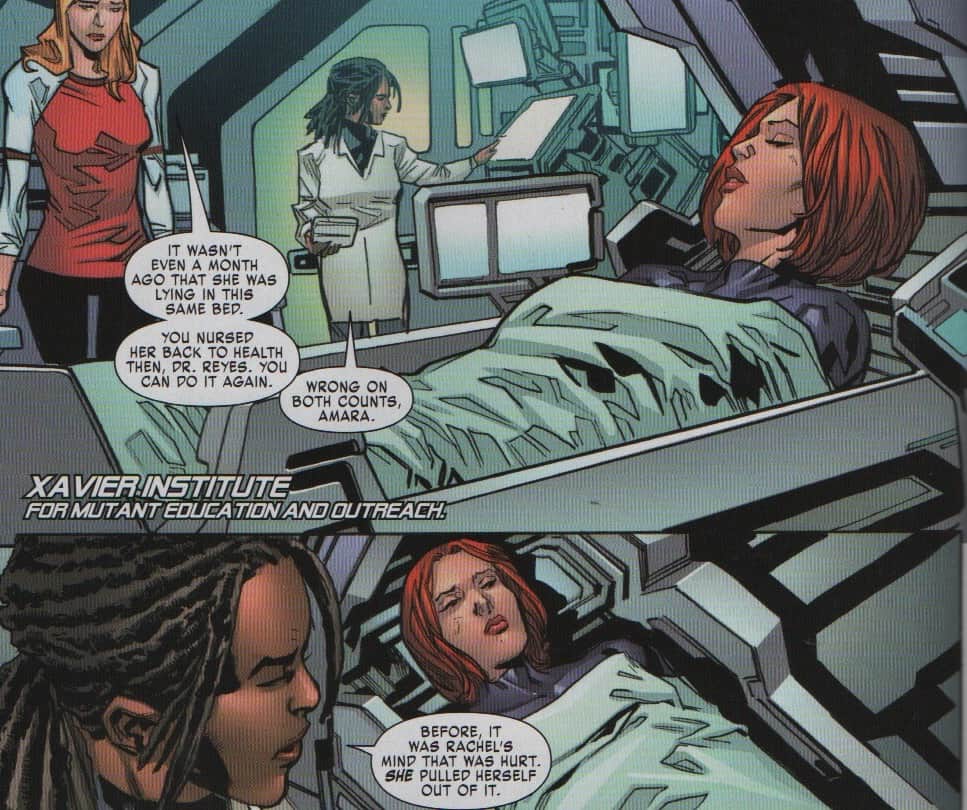 In equal dire straits are Kurt and Kitty. Locked in separate cells and manacled each muse on their predicament. Kitty is visited by her captor Kologoth who reveals he can not only speak English but knows her name. He adds that he has also picked up the technology to stop her phasing and states it wasn’t his intent to take her prisoner. When she asks him to let them go he reminds her that not so long ago the tables were the other way round and leaves her as she asks where Kurt is. Nightcrawler is meditating on his surroundings and notes there are no doors or windows so he cannot easily discern an exit due to his ability to line of sight teleportation only. Remembering the last time he was in similar circumstances he ponders his chances of repeating the gamble he took when captured by Doom.

As the would-be rescuers arrive Ink asks Logan if he is at all interested how they are coping with the ride. Armor mocks him and Logan states if he were worried he wouldn’t have brought him along. Looking out at their surroundings colossus states the calculations of Dr. Brashear may be in error. As they see the locals flee and assume it’s their arrival Hisako notes the arrival of several short-range craft and correctly assumes it’s these that have caused the panic. Deciding retreat is the best option Logan instructs them back into the ship, too late however as he is fired upon by attacking soldiers. Colossus tells Ink to get him sky-bound and they fly up as Hisako armors up and takes fire. Ink asks if they are taking sides and Colossus says just defending themselves is enough for now as he lands on a craft and tears open the hatch. The pilot commands him to stop telling him they aren’t attacking them. Colossus seems shocked they speak English and is told that they speak many tongues and informed they are in the middle of a combat zone. 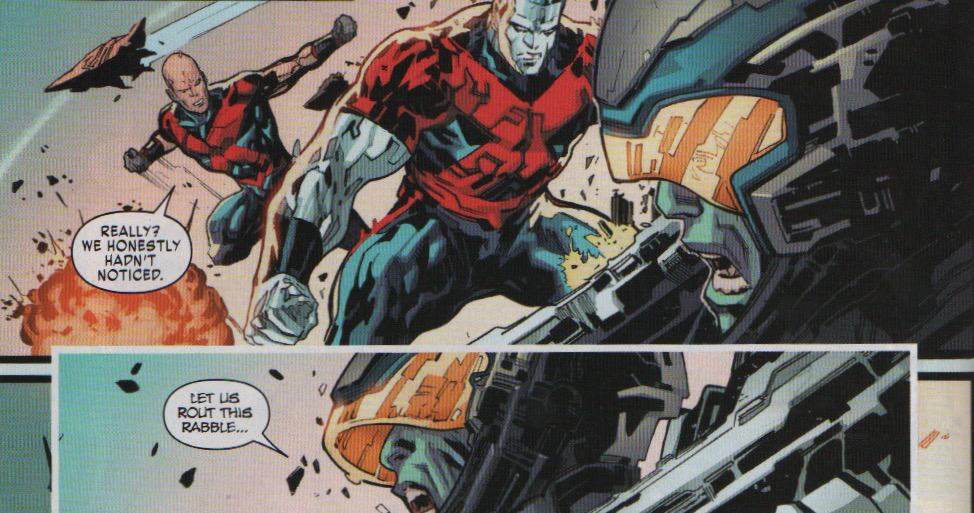 After a short exchange, they are taken to the Dartayus Parliament where they are filled in on the identity of the man they are after and vow to deal with him and rescue their teammates, which the general tells them won’t be easy as Kologoth is in hiding. Storm has an issue with Logan’s statement and they ask the leaders to let them discuss the matter in private. When they are alone Logan asks Ink to set up a psi-link as he isn’t convinced they are unobserved and assures Storm that he is only interested in retrieving Kurt and Kitty and not getting involved in a war. They all agree and after a request from Armor Ink says he cannot scan the general to see if what he says is true. This leaves them with finding out where Kologoth has their friends. We, however, can see they are being held in the Temple of Scythian. Kologoth is told by Augor that his forces have just been defeated in a skirmish and assures him they killed themselves in penance as well as the arrival of the X-Men. Concerned they could sway the course of the war he decides to contact them to discuss the return of his prisoners, he must not have them interfere with the plans he has for Scythian who it seems he is attempting to revive. 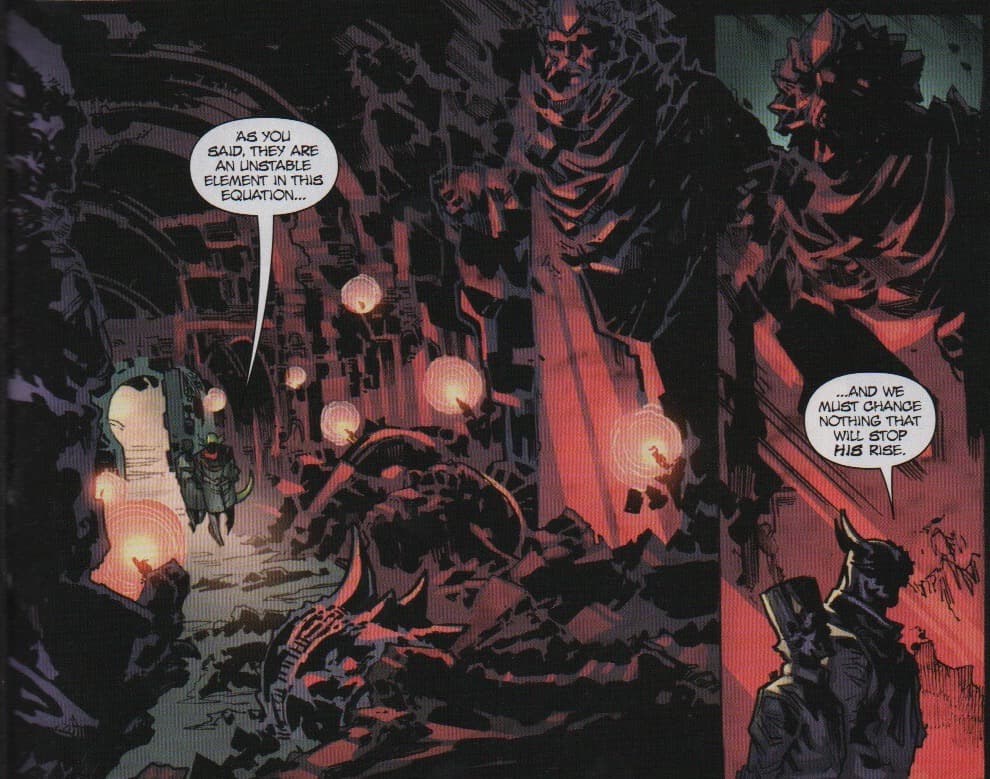 Finally, we return to Kurt in his cell who decides, rather than wait to be tortured or killed, to take matters into his own hands. Eerily mirroring those events which led to his death a few years ago at the hands of Bastion, he makes a move which has immediate consequences and leaves his fate decidedly in the balance. 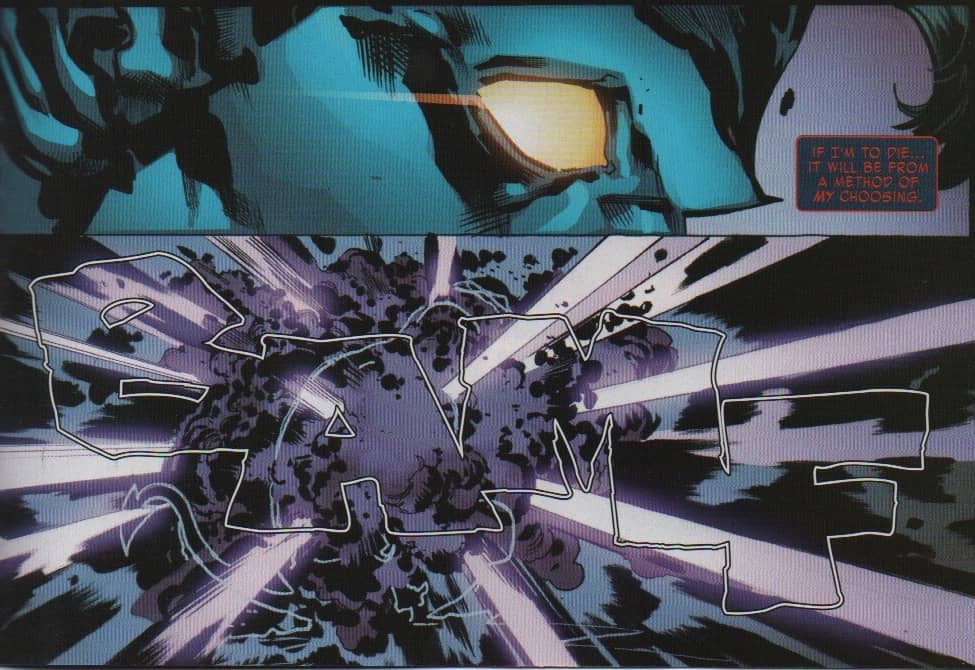 What Just Happened?
As well as Storm actually defend Forge at the start of the issue it’s a nice touch by Guggenheim having Nightcrawler in the same dilemma as years ago with Dr. Doom. Given the outcome of this situation it was a good nod to the past and thought it was a shock to see how he resolved it, the fact remains that repercussions of such actions aren’t always without consequence which Lashley has clearly spelled out here. Kudos also to Fernandez for the dimly lit cave setting of the temple of Scythian, the contrasting bright flash of entry to the Negative Zone and battle scenes as well as Kurt and his bleak dilemma. And though we all know Kurt will show up soon on the Red team AS WELL as still be a member of Gold it will be interesting to see how we get to that stage and if indeed what happened here in the final shocking scene has a part to play in his future. However, I am confused as to Nightcrawlers tactic here. If his move was to avoid being tortured or killed why not at least wait to see if that was indeed his fate? As soon as he was for certain under threat then he would be right to take such drastic action. Also if he waited for someone to enter maybe he’d have seen the exit and know where he could teleport to safety and escape. Similarly, last issue I was at a loss to discern why Rachel needed to jump into the fray physically, her telekinetics could easily have saved Logan and it wasn’t even necessary anyway as he recovered quite quickly from the fall. Just as the firefight upon the X-Men arriving on Dartayus is somewhat confusing. Being fired upon one minute, then being told by their attackers they don’t have a quarrel with them does seem to be at odds with the situation. Adding to all this, I am wondering how it is that Old Man Logan gets seniority over Storm as deputy leader here. Is it because he was the one who decided on the mission in the first place or is Storm simply not interested in taking the helm? It is a minor issue but given the criticism of her being demoted already among fans, it might have been a good idea for Guggenheim to have addressed it in some small way. The space epic here isn’t yet on a par with Whedon’s Breakworld saga, though with a bold cliff-hanger it has shown promise.

Final Thought: As confused as I was by our heroes decisions this and last issue it is reassuring to see its clear now that Kologoth is the true enemy here and not the ruling party. Not only has he killed his own parents for abandoning him as a child but seemingly the only recourse his soldiers have for failure is their immediate death at their own hands. Clearly, he is a force to be reckoned with.