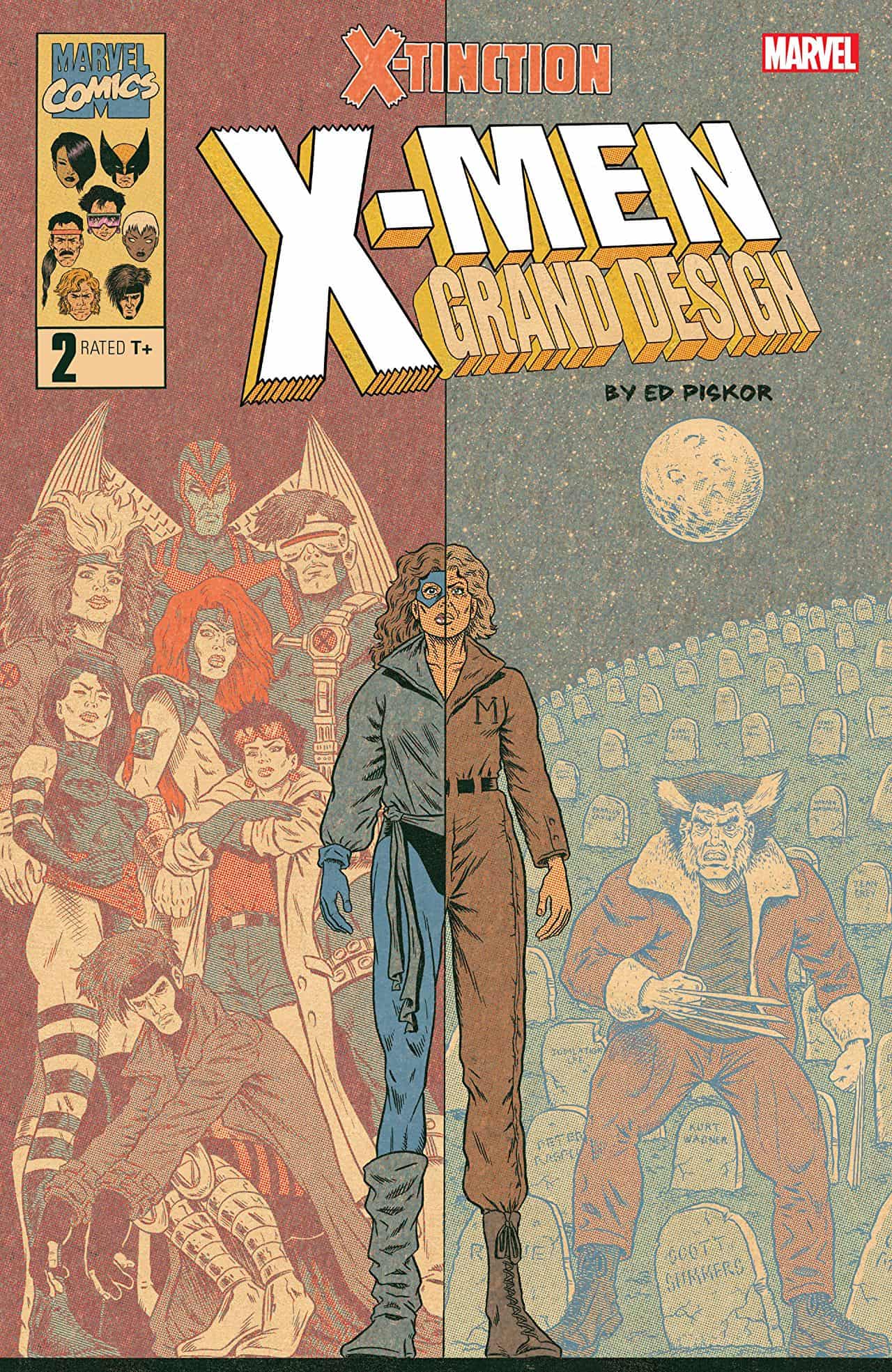 Last time on our funky artistic summary of X-Men history, we had reached the notable X-men stories of the late 1980's. Ed Piskor's gorgeous illustrations retold the events of the excellent and bloody "Mutant Massacre" storyline where the X-Men fought a bloody battle against the mutant killing Marauders followed by a summary of the more convoluted than entertaining story arc "Inferno" where Jean Grey clone Madelynne Pryor  transformed into the demonc Goblin Queen who unleashed a swarm of hellish demons amongst New York and the X-Men. After defeating Pryor with the aid of the newly resurrected Jean Grey, the issue ended with the rest of the X-Men asking Cyclops just how the holy hell Jean Grey is alive and how long has he known?

It seems as if the whole idea of Grand Design seemed to be illustrator Ed Piskor’s writing/drawing a love letter to the X-Men that streamlined decades of increasingly intense and famously convoluted backstory developments into a concise and beautiful retelling of X-history that was easy to follow, and did an excellent job of foreshadowing later plots (Prof.X gets a flash of Mr. Sinister leering behind a young Scott Summers the first time he meets the young mutant).

Now in what appears to be the final issue of the series, Piskor takes the approach he took to the X-men’s past and combines elements of several dark futures that appeared in the X-men over the years (DOFP, Bishop’s time, Cable) – and with the help of a few artistic liberties here and there – combine all of those futures into a single depressing linear progression of anti-mutant extinction .

After getting the explanation of Jean Grey’s resurrection (fun fact: it was because Marvel wanted the classic first class lineup for their at the time new X-Factor team) out of the way, it was all downhill for mutants from there.

It was chilling watching the anti-mutant fear slowly grow leading to the registrations, hate attacks, sterilizations, and of course the creation of the Sentinels, Master Mold and Nimrod being created. 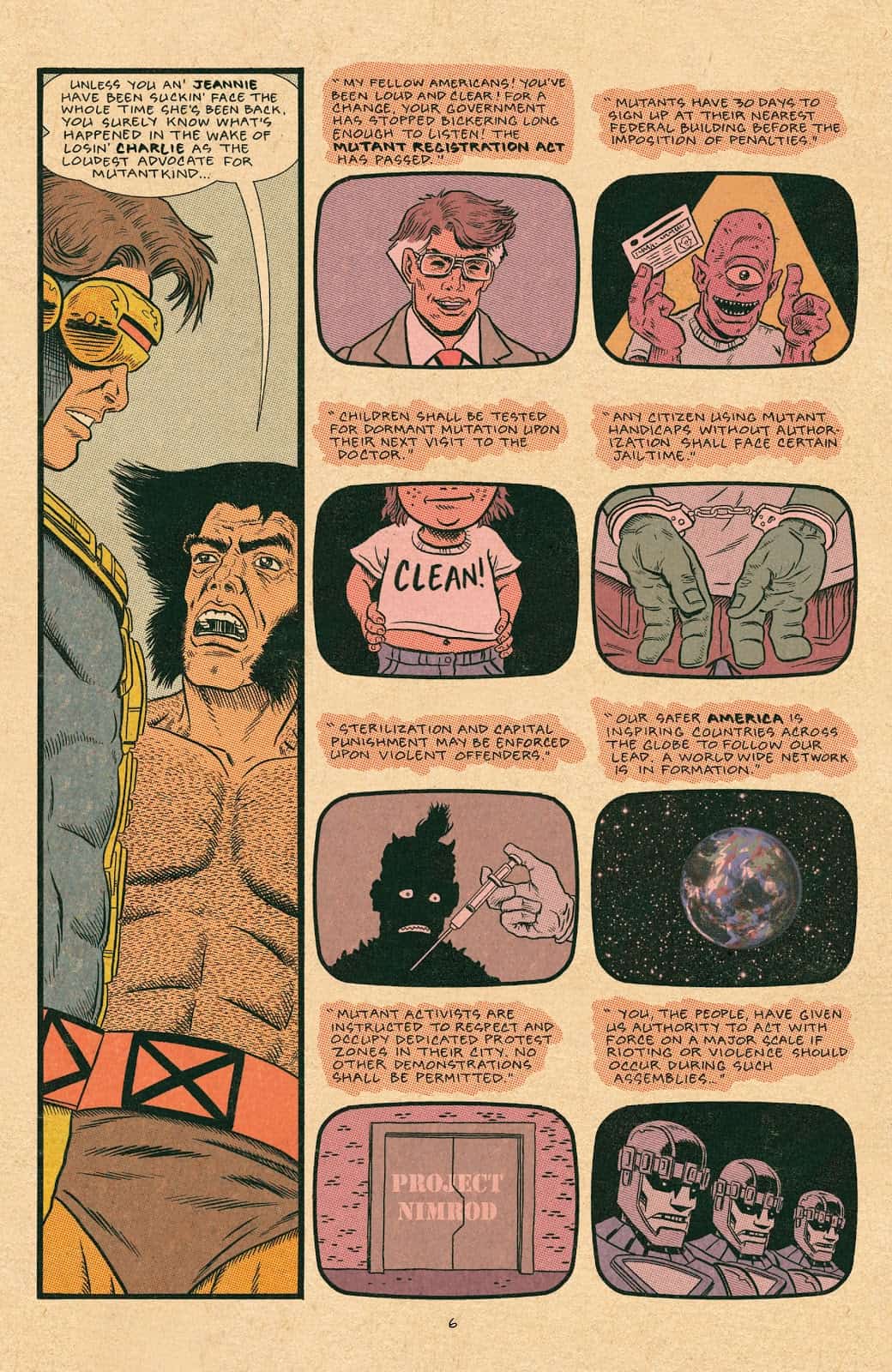 Reading the first time Wolverine met up with 90’s X-men staple Jubilee reminded me of how much chemistry the two had and reminded me of being a kid reading old Wolverine back issues and enjoying their mentor/student relationship.

Ed Piskor’s art as always is the same incredible, pop art/album cover style that made this series famous to begin with. Reading the dialogue and narration of Uatua the Watcher shows just how dedicated Piskor was to doing his research to make this story possible and he deserves massive credit for it.

This series was full of fun character moments that highlighted the ongoing struggle, the family bonds, the unyielding heartbreak and the hope for a better future that made these characters so endearing for us as readers. Just look below, when half way through the issue, the X-Men try to rescue enslaved mutates on Genosha only to end up  as patsies for an Anti-Mutant conspiracy launched by the U.S. 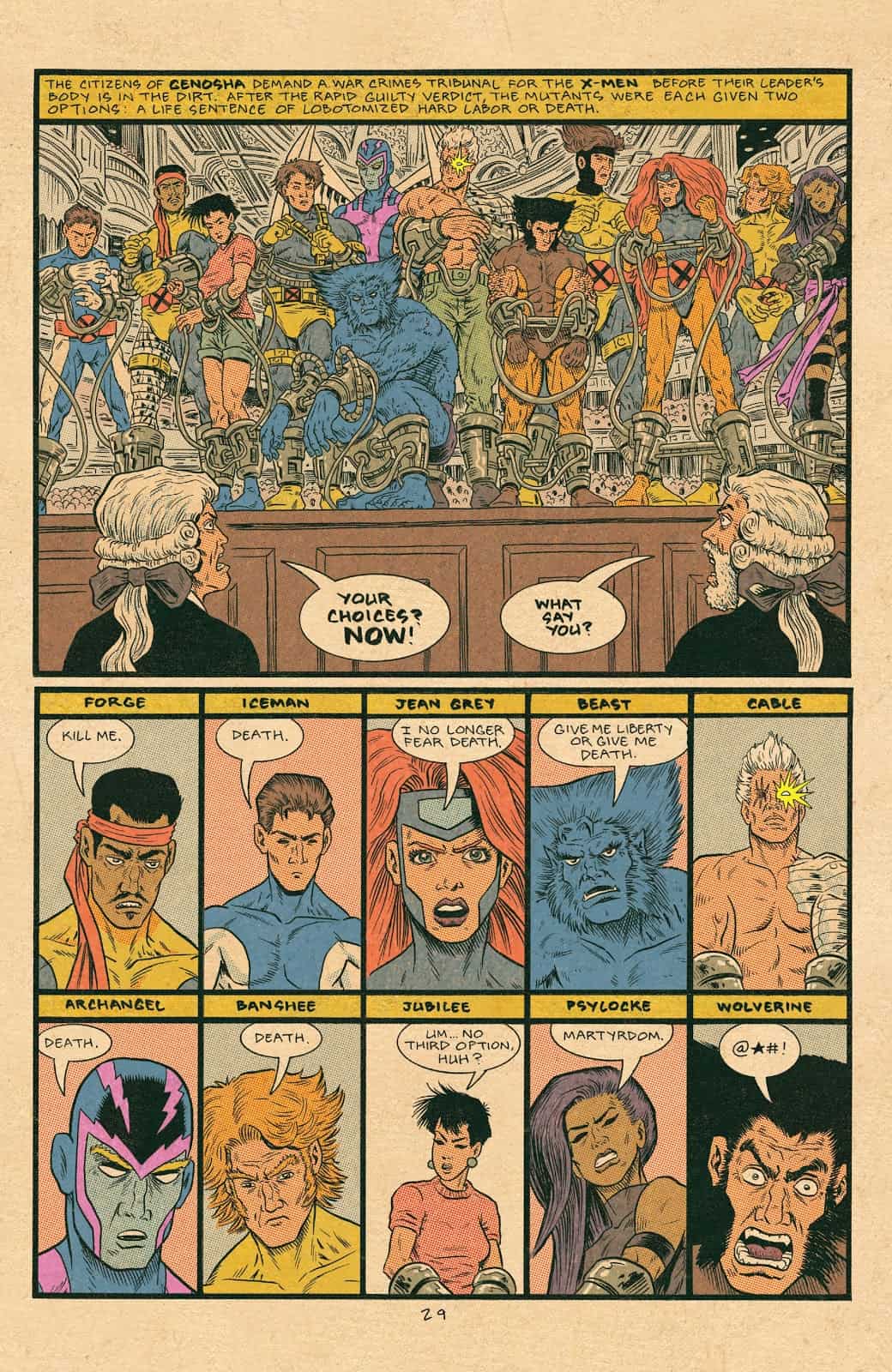 If I had to criticize anything I guess it was my initial reaction that the ending felt little too abrupt. It’s sad that this is could be the last issue of the Piskor’s X-project.

Having said that, I’m certainly glad that I studied the annotations at the end of the issue. The ending which flashes back to right after Jean Grey’s funeral and future Kitty Pryde having successfully prevented Grand Design’s mutant extinction fate. I thought that the final panel where Cyclops decides to answer a job posting he reads in the newspaper was meant bring his tragically destined romance with Madelyne Pryor full circle. Actually, the final annotation says that this is the moment where Cyclops chooses and different job posting and DOESN’T meet Madeylnne which is as the comic puts it “A new indication that the new timeline will be different and hopefully a brighter future than the previous one”.

This seems to provide Piskor with an “in” for if he ever decides to do a follow up series covering the events of X-men books in the 21st century. After knocking the Chris Claremont era out of the park, how awesome would it be to see a Grand Design series that retold the Grant Morrison and Joss Whedon runs? Hopefully for our sake, he skips all the Chuck Austen stuff…

X-Men Grand Design X-Tinction was a bleak, gorgeous and surprisingly heartfelt ride that reminded me why we love the X-men and mutants in the first place. It’s the ongoing struggle, the family bonds, the unyielding heartbreak and hope for these outcast characters that made the franchise so uncanny in our minds to begin with. The complicated history of the X-men may seem intimidating but if you’re a casual fan of the X-men or just a fan of great artwork then you’re sure to get something from this series.