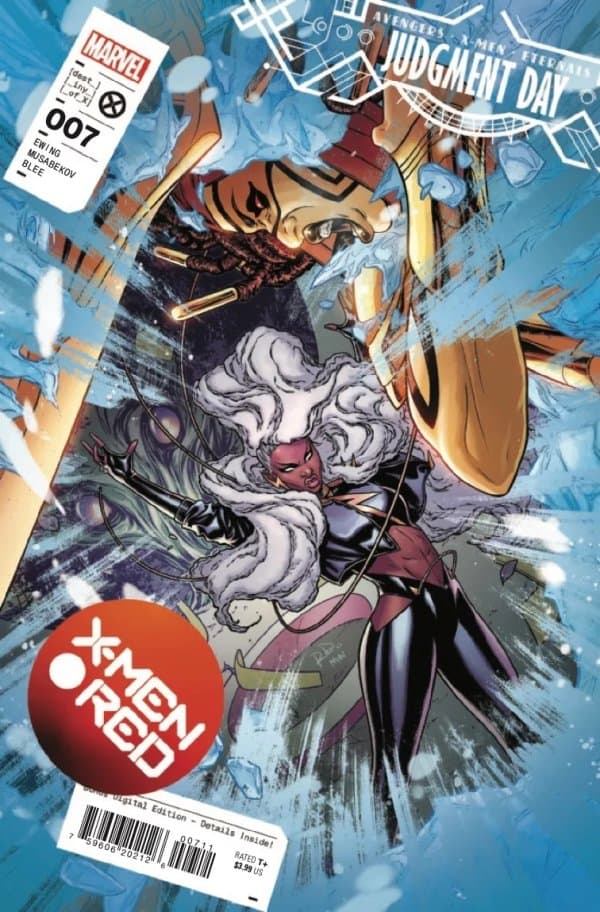 The Arakki council is standing on the burnt bones of their people and the only way to survive is to knock Isca The Unbeaten (the perpetually unbeatable) off of the board. How do you teach the meaning of loss to someone who cannot lose? You teach them some poetry.

This issue reminded me, strongly, of T.S. Eliot’s “Ash Wednesday,” a poem which was written as a means for the poet to reconcile the cynicism of his previous life with his conversion to the belief that there was a different way for him to exist within the world. The central characters (Storm, Isca, Magneto: the Arakki themselves) are in the midst of a similar conversion — a reimagining of the possibilities inherent in their own lives, even as they stand amidst the ashes of their dead. In this review, I’m going to position a snippet of Eliot’s opus before a brief summation of the changes experienced by each character. My hope, in doing this, is that it will prove an adequate reflection of the brilliance on display in this book.

Because these wings are no longer wings to fly

But merely vans to beat the air

The air which is now thoroughly small and dry

Smaller and dryer than the will

Magneto’s death has been drawn out across four issues of story, and it’s worth every panel of time that he gets. This is a Magneto who has been so thoroughly converted to Xavier’s Dream that he is willing to die for it. This agéd eagle spends his last wingbeat preserving the dream from a corrupted dreamer. There’s absolutely no doubt that Magneto will be brought back, and that will probably happen sooner rather than later, but even if this was the absolute end of this story it would be a good one.

And I who am here dissembled

Proffer my deeds to oblivion, and my love

To the posterity of the desert and the fruit of the gourd.

It is this which recovers

My guts the strings of my eyes and the indigestible portions

Which the leopards reject. The Lady is withdrawn

Let the whiteness of bones atone to forgetfulness.

There is no life in them.

How do you teach a woman who, by definition, is incapable of loss to lose? If you are The Fisher King, and all you have is Loss, you challenge her to know more about the subject than you do. By making Loss and Grief into a competition, a battlefield of pain, The Fisher King forced Isca to change her perspective. He forced her to see the ways in which her gift has isolated her from everyone she should have loved, and in doing so he brought the Unbeaten Unbeatable crashing to her knees.

Of course this was a trick that Sunspot tried out, as a variety of test, during his secret Table of Night machinations, so careful readers probably spotted that it was coming, but it was a brilliant bit of writing, and a delight to see in action. That bit of prose recounting a new perspective of Isca’s unbearable history was enough, by itself, to bring any reader to their knees.

And the lost heart stiffens and rejoices

In the lost lilac and the lost sea voices

And the weak spirit quickens to rebel

For the bent golden-rod and the lost sea smell

The cry of quail and the whirling plover

And the blind eye creates

The empty forms between the ivory gates

And smell renews the salt savour of the sandy earth

The thing about death is that it makes excellent fertilizer. Storm is grappling with the loss of a friend, the loss of a foe, the loss of faith in a man that she once called mentor. This is a woman who has lost her power, lost her throne, lost her people, lost her innocence, lost her parents, lost her husband, and now she is in the midst of losing her world. But she is Storm, she is the goddess, sanctified to Life and as willing as nature itself to mete out death. She has ceded her seat to poetry and to a new vision of the world, and in so doing she has planted and fed (on her own blood) the seeds of tomorrow. Al Ewing writes Storm better than anyone in the last twenty years, other than Ta-Nehisi Coates. He knows exactly who she is, and he writes her brilliantly.

Of course there was also some groundwork laid for future plots. Cable looks to start a rampage fairly soon. Brand is six days behind in her own machinations. There’s plenty to come, beyond the upheaval of outmoded systems. It seems, once again, that Ewing is seeing through to brilliant completion what Si Spurrier is absolutely failing at in Legion of X: examining what happens when a culture experiences a massive sea change and reimagines a different way of being. One more reason to hope that Legion of X will be cancelled: it’s unnecessary, a pale shadow of this brilliant book.

Stefano Caselli’s art is tender, brutal poetry in and of itself. Each line projects its own brand of subtlety and power. His close-up shots of Storm and Magneto are the kind of image that becomes immortal within this medium. Federico Blee and Fer Sifuentes’ color work is astonishing, adding shadows, light, ash and blood to what is, essentially, a visual symphony.

This was an astonishing story, told with passion, skill, and more than a measure of contemplative thought. This story reminds us of what comics can do, what they can be, as an art form. This series stands tall amidst the rubble of lesser attempts, promising something entirely better.

This was an astonishing story, told with passion, skill, and more than a measure of contemplative thought. This story reminds us of what comics can do, what they can be, as an art form. This series stands tall amidst the rubble of lesser attempts, promising something entirely better.