X-Men Trial of Magneto #4: Where For Art Though Story? 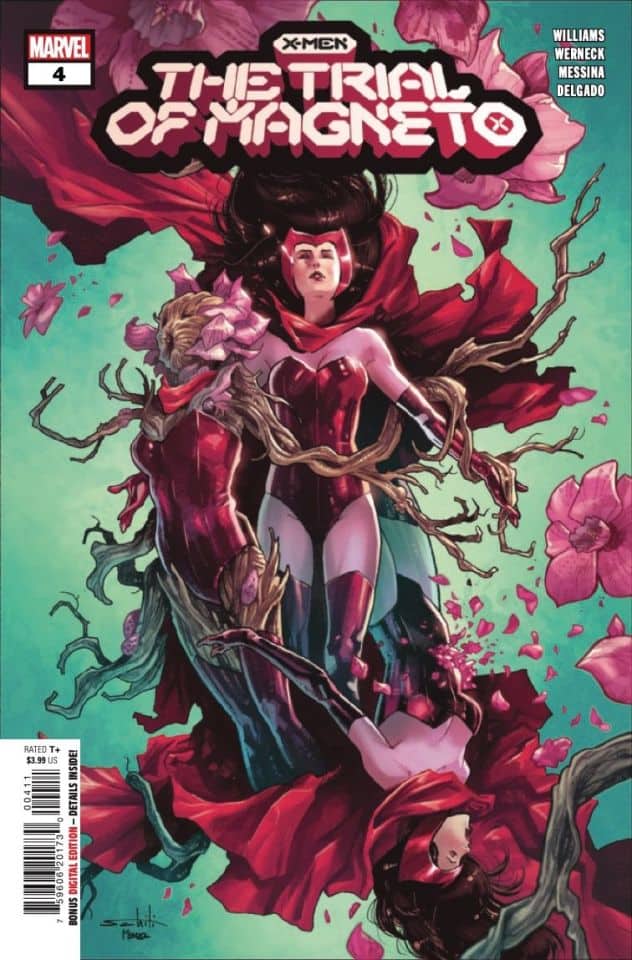 DOUBLE, DOUBLE TOIL AND TROUBLE! A Wanda divided cannot stand… …but there are many other things she can do. Chaos comes to Krakoa.

Some basic corrections must be issued before I begin. First, as far as canon is concerned, Billy has not learned any magic from Wanda. Second, he has not spent his “entire life” defending Wanda. The only time he ever had to defend her was in Avengers the Children’s Crusade, the last time we saw the Avengers, the X-men, and Magneto butt heads on the scarlet question in the room. Third, he did not even know he had any relation to Wanda until he was sixteen. Finally, Billy’s powers are always blue. Never red!

But there is one key piece of the story of Billy and Tommy and Wanda that Williams completely forgot about: Billy and Tommy are not Wanda’s kids…well, they are, but they’re not. It’s weird, confusing, and she is, but she isn’t. But, hey. It’s comics where there are no rules until there are, and we make things up as we go along. Billy and Tommy did not spend their entire lives with Wanda. She didn’t praise them. She has never been a part of their lives, and although they have a relationship of some sort with her post-ACC, the exact nature of that relationship hasn’t been addressed yet in canon. So, Williams fabricates a strong familial relation and a lot of emotional weight when there was little, if any, to begin with.

Was she Billy’s favorite Avenger? Absolutely. But he didn’t meet her until he was a teenager before he had powers and did not see her again until he stupidly decided to visit Castle Doom in Avengers, the Children’s Crusade. Billy has parents, Jeff and Rebecca Kaplan, who raised him and loved him. On the other hand, Tommy had crap parents and only met Wanda for the first time when she had amnesia and felt as though he couldn’t let himself view her as his mom for fear of losing her. How interesting would it have been if Williams had explored the latter aspect?

Speaking of Wanda, with one issue left, the misnamed “Trial of Magneto” is full of unanswered questions. There is a good set-up for Wanda’s sort-of children to help her regain the last of her memories, which makes no sense in the grand scheme of things. It creates a weird dichotomy that comes from nowhere and feels like it should have more background and support for Williams’s goal.

Though finally revealing the context of how Wanda was brought back to life, this entire issue still created more questions, with a predictable answer to the Kaiju. To his credit, Wiccan throws a great wrench into the central question of the series: Who killed the Scarlet Witch? Thus, putting the investigation in a new direction. And yet, there are still so many questions popping up, as though someone did not tell the creative team this was only meant to be five issues.

This comic is called the Trial of Magento, so I’m sure he will have plenty to say about everything that’s going on…oh, wait. There are too many plot threads and questions that will never be answered, begging the question, why bring in so many people and players and such a big deal was made out of the “Trial of Magneto” when all he’s done was allegedly kill Wanda, ask the council to resurrect her, get denied, complain about Lorna, and fight everyone. So, where does the trial part of the story come in? Can anyone tell me where to find it?

The theme of this issue is guilt, and addressing the guilt that amnesiac Wanda subconsciously feels while coming to grips with her present and her past to have a long and happy future felt empty and meaningless. But perhaps the final issue will bring it to a successful conclusion.

The only thing keeping me remotely interested in reading the final issue is to find out how it all finally ends and to find out who killed, tried to kill, sort-of-killed, who did the thing to the Scarlet Witch that led to this entire mess in the first place. It lacks any emotional impact, and the entire mini is rushed because just when an issue starts to go somewhere, the readers are distracted by a fight scene.

Honestly? What had a strong beginning has floundered into a flat, dull, and crowded story that should have been about reuniting a family, healing old wounds, and forging a new path for Wanda and Magento. But this isn’t what we got. Instead, this is a mini mess of ridiculous magic and mayhem that missed the opportunity to tell a meaningful and impactful story.

This is not the Trail of Magneto, this is yet another convoluted Wanda Maximoff story, and we are just the spectators. We are running low on time for answers. At this point, I’m seeing this through to the end, and I hope that the end is worth it.

X-Men Trial of Magneto #4: Where For Art Though Story?