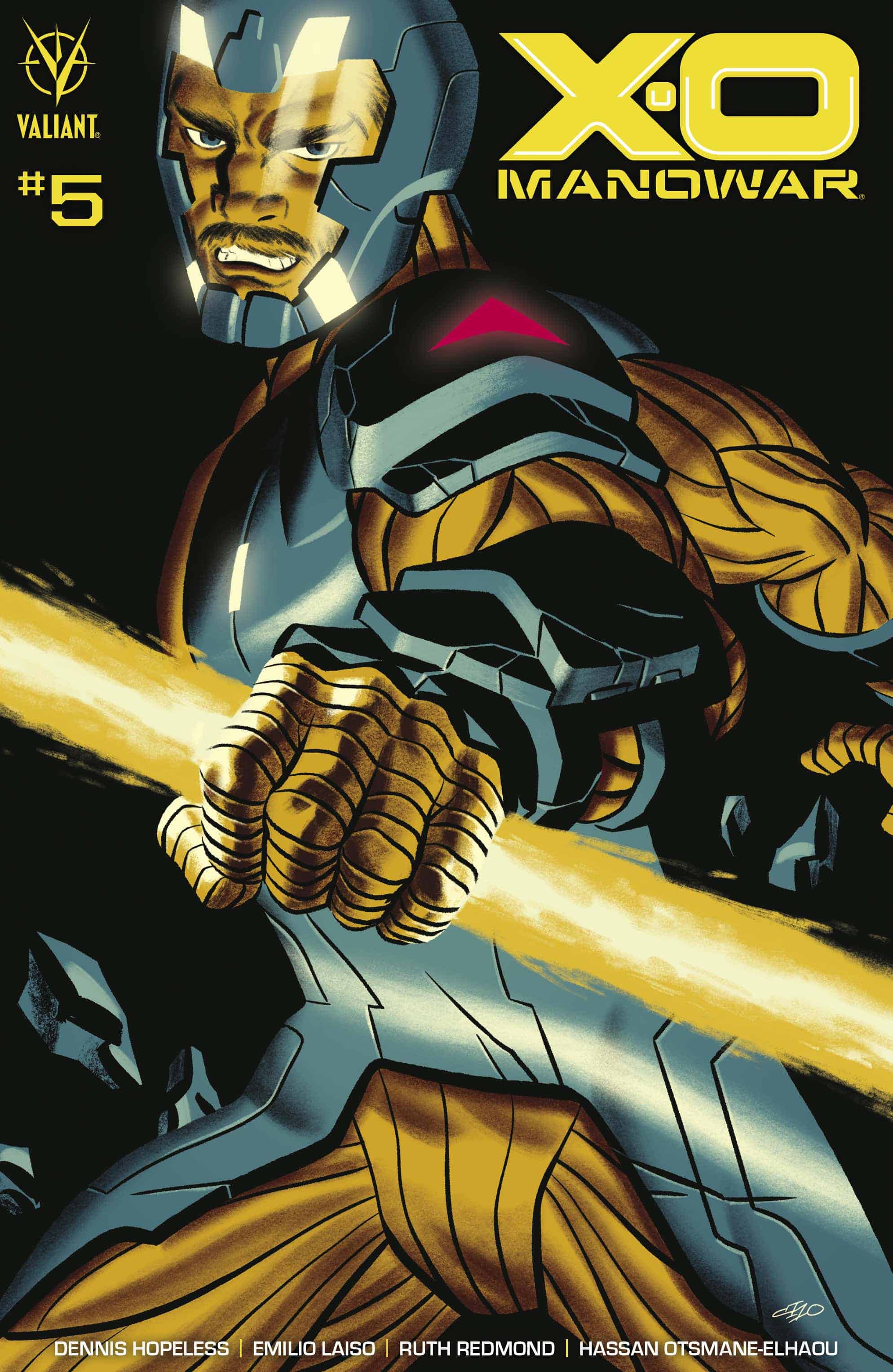 X-O Manowar is drowning literally and figuratively in new enemies, new responsibilities, new ...tech? Are Aric and Shanhara up to the challenge of being the world's most prominent superhero let's find out....

When last we left Aric he was being attacked by a new threat a techo-organic monstrosity the likes of which he’d never seen. Even with the assistance of his new PR coach/tech guy Whitaker he was literally deep in trouble. Now that the break is over and we pick up where we left off and firing off a new arc we see…a new Aric? Puzzling statement I’m sure but fitting nonetheless, the first arc was very tongue-in-cheek and overall unusually lighthearted for X-O Manowar, which offered some great humanizing moments and some new enemies set up to contrast the tone. Your mileage may vary on the approach but seeing this shift in direction with the opening shot should probably quell any lingering cautiousness. The first issues teased a much bigger role for Shanhara “her” self and I won’t spoil the ending but if this is how that new role starts this arc should scratch that X-O itch you’ve had a hankering for.

That’s not the only draw here though, far too often the skilled work of letterers goes unpraised though that out not to be. Case in point: Hassan Otsmane-Elhaou absolutely kills it in the lettering game reminding you with every explosion or fiery delivered dialogue that not letterers are created equal, the man’s work is exemplary here per usual and adds an entire element to enjoy just to soak in the variety and tastefully done choices to make the exposition of sounds an art form unto themselves. At this point just like you’d pick up say Wolverine if you saw Adam Kubert’s name attached pretty much on reflex you can do the same with Hassan knowing he’s gonna bring a unique flavor with his lettering you’re just not gonna get from any old book.

Emilio Laiso, Raffaele Forte and Ruth Redmond bring the total package as well. There’s a wide variety of scenes packed into this one issue from underwater kabooms to digital landscapes and massive Gundam Wing worthy guns popping off and all of them are rendered fantastically. Emilio balances between more manga, bubbly energied art of the greats like Mike Wieringo and Jeff Matsuda but still brings that needed edge only further exemplified by spot on inks from Forte. Ruth Redmond has proven herself time and again,, one of the best in the game when it comes to balance between contrasting a variety color palettes and nailing the emotion of each scene and X-O Manowar #5 is no exception.

The jovial tone of the first arc raised many eyebrows but this opening salvo of round 2 shows how that fresh build up pays off, diving right into what already feels like an epic adventure for everyone's favorite Visigoth.