X-Terminators #1: Putting the X in eXploitation 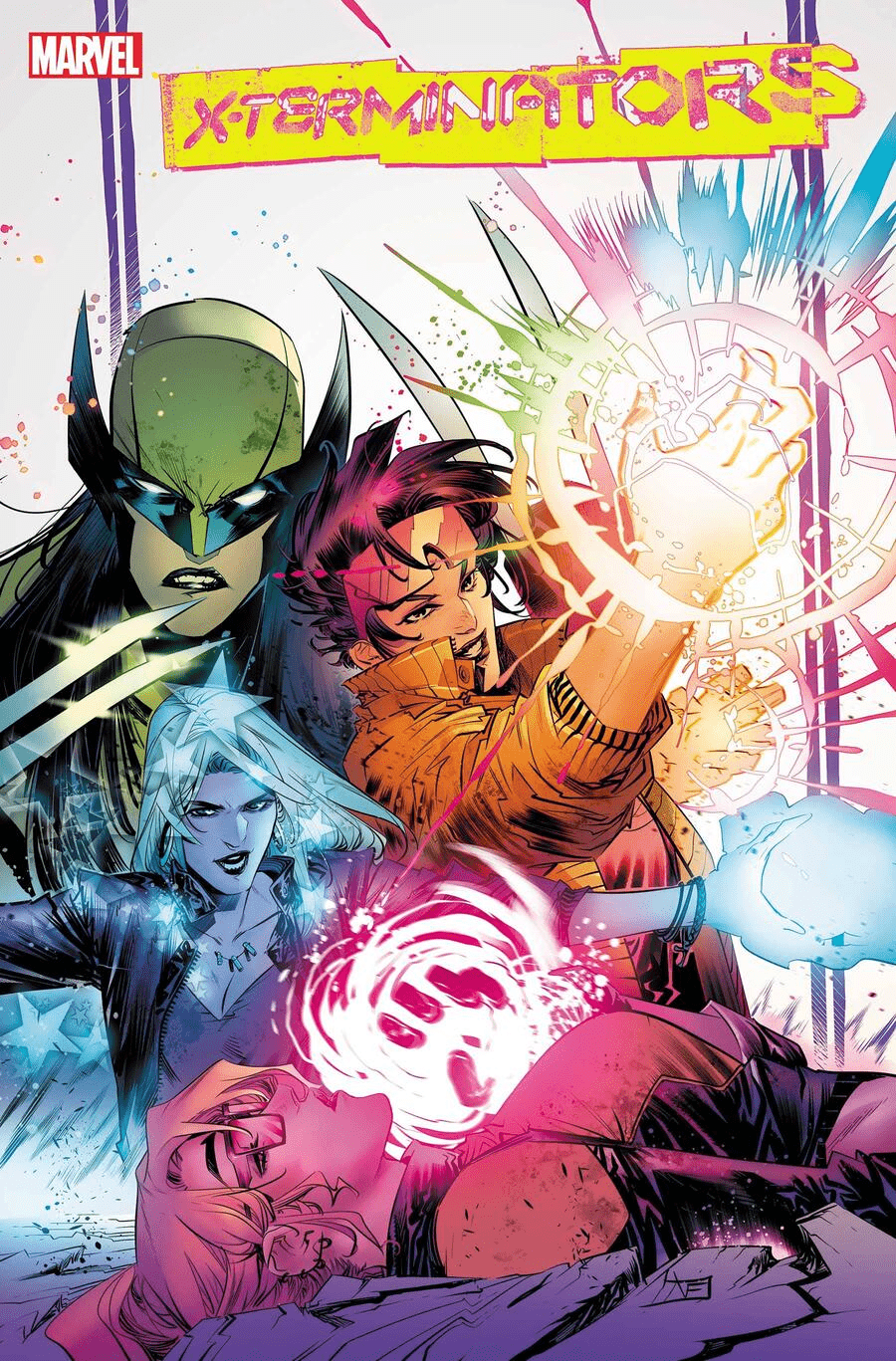 ENTER THE GRINDHOUSE OF X! When Jubilee and Boom-Boom agree to take Dazzler out for a night on the town to console her after her nasty breakup, they have no idea they're about to be kidnapped and put into elaborate death traps for their efforts! What are three girls with the power to blow things up to do? Leah Williams and Carlos Gómez put the X in eXploitation in this tale of blood, sweat and REVENGE!

The very first panel of X-Terminators #1 is a close-up of Dazzler’s butt sporting a pair of booty shorts emblazoned with the word PRAXIS, which gives you a decent impression of what the rest of this comic is going to be like. Advertised as the “grindhouse of X” in promotional copy, this comic features Dazzler, Boom Boom, and Jubilee wading through a dark underworld of blood, booze, and viscera. Yet despite the grit and grime, X-Terminators #1 is both ridiculously fun and incredibly refreshing.

A core part of the appeal of this comic is its silliness. Here, writer Leah Williams appears to be channeling Gwenpool Strikes Back much more than she is The Trial of Magneto. X-Terminators #1 never quite breaks the fourth wall the way Gwenpool Strikes Back often did, but it gets awfully close a few times. About halfway through the issue, it’s revealed that Dazzler’s no-good ex-boyfriend Alex is a vampire, but given that he dresses like Lestat from Interview with the Vampire and wears the same protective amulet that Jubilee wore in her vampire days, this is hardly a surprise. And the comic doesn’t want it to be a surprise—it wants you to delight in the ridiculousness of Dazzler suddenly having to deal with a cartoonishly evil vampire ex-boyfriend who’s never been mentioned before and who exists purely to give Dazzler some vampires to blow up with her sparkle powers. The dialogue is just as hilarious, with Jubilee and Boom Boom constantly delivering killer one-liners. “You look like if Barbie was a sex addict” is not a sentence one can easily imagine the X-Men animated series version of Jubilee saying, but for the version of the character that this Parental Advisory rated series depicts, it’s absolutely perfect.

But there is substance beneath the silliness, no matter how much the comic may insist it’s all about violence and sex appeal. X-Terminators #1 provides a refreshing contrast to the way many current series in the X-Men line have been characterizing these characters: as important public figures, godlike in their power, dignified and majestic. In X-Terminators #1, Dazzler, Boom Boom, and Jubilee are gloriously sloppy. They lounge on the couch in their underwear or throw their ex-boyfriend’s TV out the window or puke after riding in a monster truck with no seatbelt. X-Terminators #1 reminds us that these mutants are ultimately just people who sometimes make bad decisions like the rest of us. They’re not gods, and they’re barely even superheroes—they are, as Jubilee puts it, just doing “[their] %&$#@ best.” By humanizing these characters and showing their flaws and vulnerabilities, the comic is able to highlight the immense courage and intelligence it takes for them to hold their own in treacherous situations.

It wouldn’t be a Leah Williams comic without stylish fits for all the characters which communicate their personalities almost uncannily well. Dazzler’s flared jeans and platform heels evoke her disco origins without shoving them in our faces. Jubilee sports her trademark yellow with a chic sweater dress, but her sheer over-the-knee socks add a maturity she lacked in her teen years. Boom Boom is dressed to party in a provocative minidress guaranteed to turn heads. The uniqueness and personality of these outfits are part of what make these characters come off as so incredibly sexy. It also helps that artist Carlos Gómez draws all these women as complete knockouts. So often, sexy women in comic books are all given the exact same body type, but this is fortunately not the case in X-Terminators #1—while Dazzler has an hourglass figure and Boom Boom’s cleavage is the breakout star of the issue, Jubilee has a leaner frame. Yet they’re all attractive in their own ways, and in full ownership of their sexuality. The characters have enough agency and personality that the cheesecake aspect of the art is fun instead of creepy.

The Parental Advisory rating and general ridiculousness of the series make X-Terminators #1 feel slightly separate from the rest of the X-Men line, almost as if it takes place in a different universe with different narrative rules. Yet this separation from the other series is what allows the comic to be as wild and transgressive and entertaining as it is. X-Terminators is off to a strong start, and though it will have to bend over backwards to top the zaniness of this first issue, I have no doubt it will succeed.

X-Terminators #1 is as hilarious as it is blood-soaked. This comic knows how silly it’s being and wants the reader to know it knows. Its particular brand of violence and humor may not be for everyone, but those who enjoy the concept of Dazzler roller-skating through puddles of blood chewing gum and blasting vampires are sure to love it.

X-Terminators #1: Putting the X in eXploitation