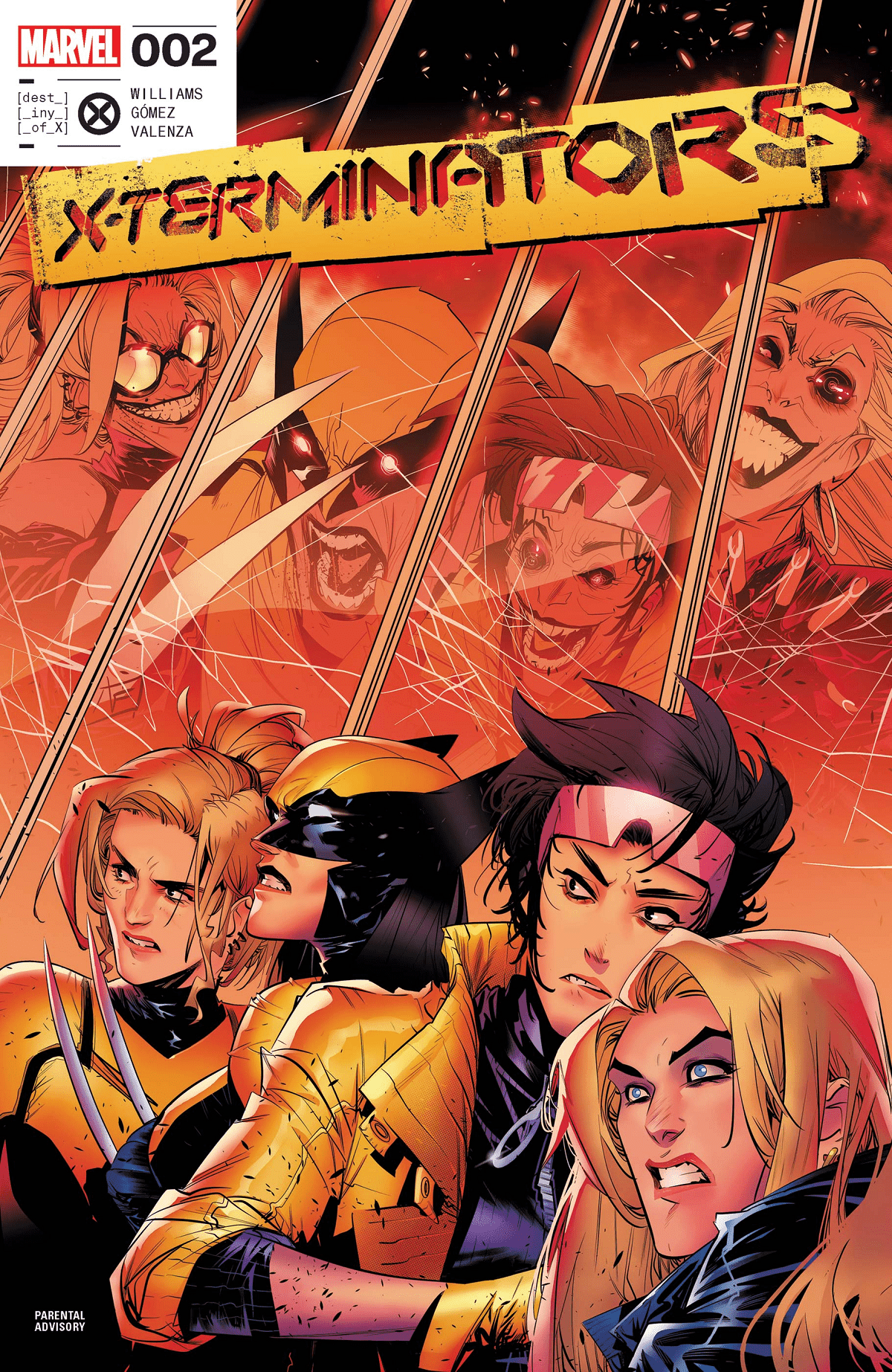 A NIGHT TO REMEMBER...When three explosive ladies hit the town, they had no idea it was going to hit back so hard…and shockingly, running into their stabby friend Wolverine hasn't made the night any less blood-soaked. Join Dazzler, Jubilee, Boom-Boom and Wolverine for a bloody, sexy gut-punch of a series that will leave you begging for another!

The final pages of X-Terminators #1 introduced the idea that the X-Terminators are being forced to find a way to survive in deadly situations in order to entertain an audience. X-Terminators #2 develops this idea further. The concept of consciously performing for an audience in order to ensure one’s survival is one that writer Leah Williams has explored before with the Gwenpool Strikes Back miniseries and the Mojoworld issues of X-Factor. In both these series, characters are aware that their continued existence depends on their ability to entertain the audience watching their every move, and they feel trapped by this situation even as they try to manipulate it for their own gain. Much the same is happening in X-Terminators #2. This issue is interested in the experience of fighting for one’s life while under constant scrutiny by a mass audience, and particularly in how it relates to being a woman.

It is no accident that all four of the mutants Alex abducted for the arena are women. There is a gendered and sexual element to his tormenting of them, one that goes beyond the X-Terminators’ sexy outfits and torn clothing. Alex forces Dazzler, Jubilee, Boom Boom, and Wolverine to engage in deadly combat for the sadistic, voyeuristic pleasure of the vampire audience and of himself. The comic itself recognizes the perverseness of this pleasure, referring to Alex as a “pervert vampire” in the parental advisory warning at the beginning of the issue. By removing the X-Terminators’ agency and reducing them to objects to be looked at for the audience’s entertainment, Alex places them in the typically feminine role according to the feminist film theory concept of the male gaze. Alex and the audience occupy the masculine role of the viewers who exert the gaze, deriving voyeuristic pleasure from watching the X-Terminators struggle.

Violence and sex are intertwined in the arena. It is obvious that Alex gets sexual enjoyment from watching the X-Terminators both inflict violence and have it inflicted upon them. Given that one of the women in the arena is his ex-girlfriend Dazzler, the situation almost feels like revenge porn taken to the extreme. The combat in the mirror maze also has a sexual element to it. Though the mirror duplicates of the X-Terminators have the powers of the characters they resemble, they mostly engage in hand-to-hand combat with the characters, who respond in kind. Early in the issue Jubilee likens their situation to a WWE wrestling match, and this emphasis on physical brawling reinforces that comparison. It also adds a sensual aspect to the fighting. At one point, Dazzler is sandwiched between two doubles of herself grappling with her, and there is an undeniable sexual energy to the way artist Carlos Gómez depicts the scene. She gets out of this predicament by gruesomely ripping the head off one of the duplicates, and the fountain of blood spurting from the duplicate’s neck could be seen as analogous to fluids released during sexual climax. The physicality of the combat in the mirror maze heightens both the sexuality and the violence.

X-Terminators #1 reveled in the joys of owning one’s sexuality as a woman. This issue examines the flip side of that: what do you do when your body has been objectified for the sexual pleasure of others without your consent? The mirror duplicates literalize the objectification of the X-Terminators and the trauma it inflicts upon these women. The constant spawning of new duplicates threatens to overwhelm the X-Terminators, as do the horrors of objectification and loss of agency. Perhaps that is why the X-Terminators choose to strike back at the mirror duplicates using fists more than powers: an attack that is so personal in its cruelty merits an equally personal response. Explosive blasts may be effective, but a punch to the face is more satisfying.

It is an interesting choice to explore concepts of performance and objectification with these particular characters. Being a pop star, Dazzler is accustomed to performing for the entertainment of others and even enjoys it, but only when it is on her terms. Getting abducted and placed in an arena to fight for the amusement of spectator vampires is like a twisted version of what she does for her day job. Wolverine is all too familiar with being forced to commit acts of violence, and she has often been denied her personhood, occasionally in ways that are sexually violent. She seems the least fazed by her situation, perhaps because she has dealt with similar predicaments many times before. As for Jubilee and Boom Boom, both women are very conscious of their appearance and how they are perceived by others, as shown through their unique fashion choices; they are also both known to put up a front to disguise their true feelings and hide their vulnerabilities. Neither Jubilee nor Boom Boom is a stranger to experiencing a disconnect between how they feel on the inside and how they act on the outside.

Though the X-Terminators don’t escape the mirror maze by the end of the issue, they manage to get the upper hand for a moment. Teamwork proves critical as Dazzler and Wolverine fight back-to-back and Jubilee and Boom Boom briefly pause their bickering to blindfold themselves using Boom Boom’s hair ribbons. A close-up panel of Dazzler taking Wolverine’s hand as they wander toward their teammates with their eyes closed highlights the importance of women supporting and relying on each other, an idea also present in the previous issue. The X-Terminators may be stuck in the arena, but they have each other’s backs, and in a situation this dire, that can make all the difference.

X-Terminators #2 has all the violence, cheesecake, and silliness of the first issue while continuing to develop the plot. It explores concepts of objectification and performance while staying true to its grindhouse aesthetic.