X-Terminators #3: The World Is a Vampire 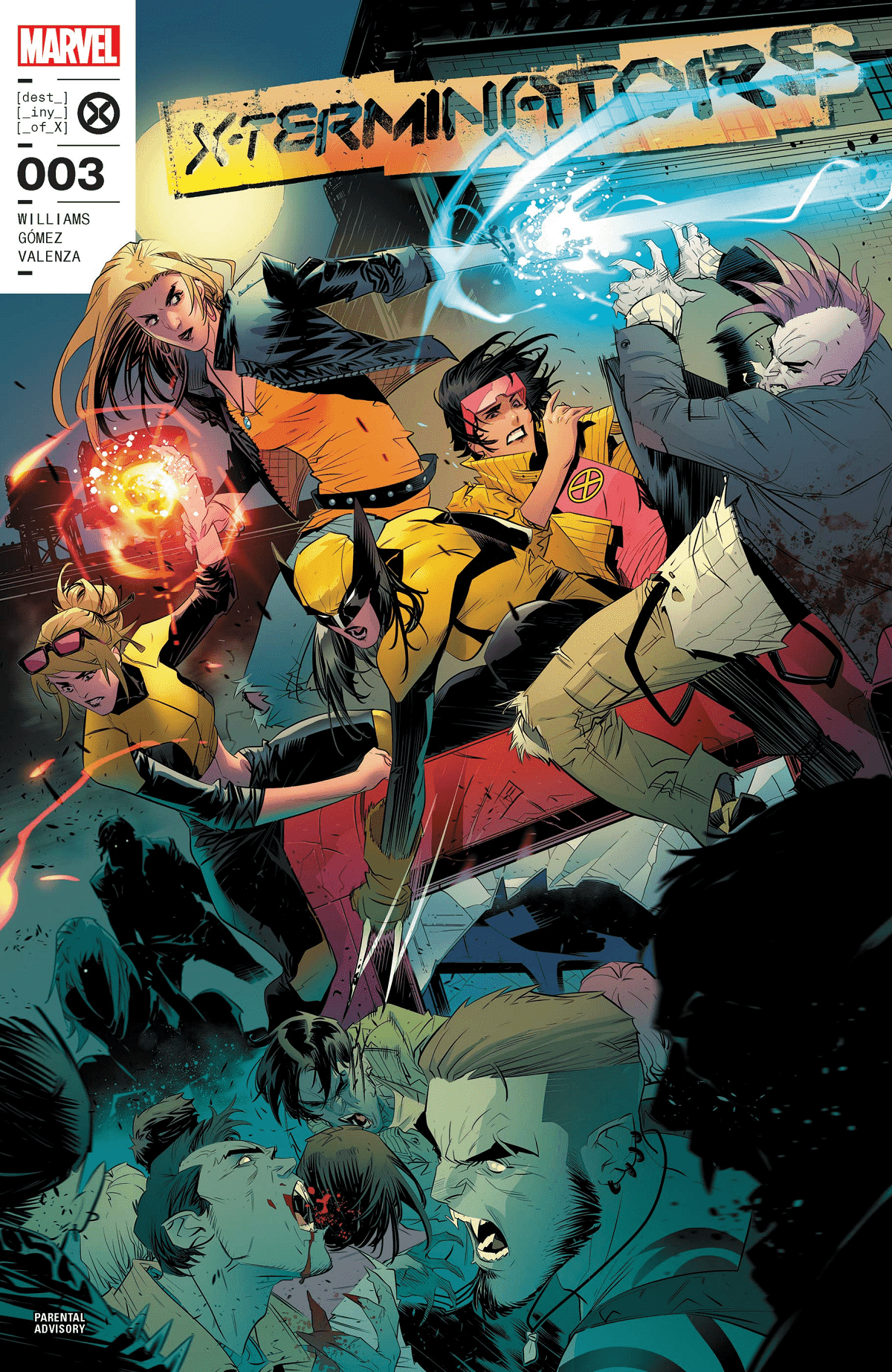 Vampires, Violence And Vengeance! Does it count as killing a man when the man in question is already undead? This problem is one the lovely ladies of bombs and blades are going to need to wrestle with as they brutally separate bloodsuckers' heads from their bodies! Just when you thought the night couldn’t get more bonkers…

X-Terminators #3 carries over from previous issues an emphasis on the X-Terminators as performers who are forced to entertain the crowd if they want to make it out alive. The audience is comprised of literal vampires, which makes clear the parasitic nature of this particular performer-audience relationship. The vampires in the audience may not be literally feeding off the X-Terminators, but by forcing them to provide amusement, they are certainly stealing their energy in a way. X-Terminators #3 continues to explore the performer-audience relationship while also asking where the reader fits into that relationship.

This issue sees the X-Terminators turning the vampiric performer-audience dynamic on its head. Dazzler devises a plan to get the crowd excited so she can convert the sound of their cheers into a powerful blast that will shatter the mirror maze. She stokes the energy of the crowd by announcing that Boom Boom will do a striptease. In manipulating the audience to grow louder so she can harness its sound energy, Dazzler has reversed the parasitic dynamic between herself and the audience. Now she is the vampire, and the audience members are the ones being used and sucked dry. Boom Boom’s baiting of the audience with her cleavage shows her reasserting agency over her body, agency that was taken from her when she and the other X-Terminators were kidnapped and made to undergo deadly challenges. She registers the audience’s fetishization of her body and uses it to her advantage. Their objectification of her, and her ability to manipulate them via that objectification, give Boom Boom and her friends the power to shatter their cage and escape.

X-Terminators #3 goes further in its exploration of the violence of the male gaze than previous issues by very directly placing the reader in the position of the vampire audience. The comic accomplishes this visually, through Carlos Gómez’s art. In the scene where Dazzler is encouraging the audience to be louder, there is a panel where she has a hand to her ear and says, “I can’t hear you.” This panel shows Dazzler looking directly at the reader, as if we are part of the audience she is addressing. Later, after the X-Terminators have blown up the mirror maze, Dazzler is searching for Alex to inflict revenge on him. When she spots him, she once again looks directly at the reader, this time pointing at us and calling us an expletive. In the next panel we see that she was really addressing Alex and that we were seeing this from his perspective. Yet, given that the reader has also been a spectator to the twisted games the X-Terminators have been forced to play, it is appropriate that she is addressing us, too.

This association of the reader with the vampire audience forces us to question what it means for us to enjoy a story of women receiving and dishing out violence. As readers, we naturally identify with the protagonists and view ourselves as being on their side—especially when the protagonists are as badass and sexy as Dazzler, Jubilee, Boom Boom, and Wolverine. But are we not more like the vampires, who watch women suffer for their amusement? Obviously, no real mutants were harmed in the making of this comic, but the issue is still concerned with the experience of deriving vicarious pleasure through violent entertainment. By positioning the reader in the place of the vampire audience, the comic disrupts the reader’s view of themself and forces them to reflect.

Another instance of the comic placing the reader in the position of the vampire audience occurs during Boom Boom’s mock striptease. A sequence of panels shows close-ups of Boom Boom’s cleavage as she pulls down one strap of her dress, then the other. The art builds the reader’s anticipation just as Boom Boom is attempting to build the audience’s anticipation, in order to draw out as much noise from them as possible. When she finally pulls down the front of her dress, both the reader and the vampires are thwarted, as Boom Boom sets off two time bomb explosions in front of her breasts, rendering them hidden. By purposefully obscuring her body, Boom Boom reclaims agency over her image and resists the objectifying male gaze, wielded both by the vampires and by the reader. The reader must contend with the fact that Boom Boom played this trick not only on the vampires, but on them as well.

X-Terminators is very proud to be a series chock-full of violence and sex appeal. It is not condemning the reader for enjoying these facets of the series. However, X-Terminators #3 shows that the series seeks to complicate our relationships to these kinds of stories. It wants us to think about what we feel entitled to seeing, and what we get out of reading these stories. The comic proposes no simple answers to the questions it raises, but asks us to ponder them.

With X-Terminators #3, the series continues to explore ideas of female sexuality, violence, and spectacle, while amping up the raunchy humor.

X-Terminators #3: The World Is a Vampire