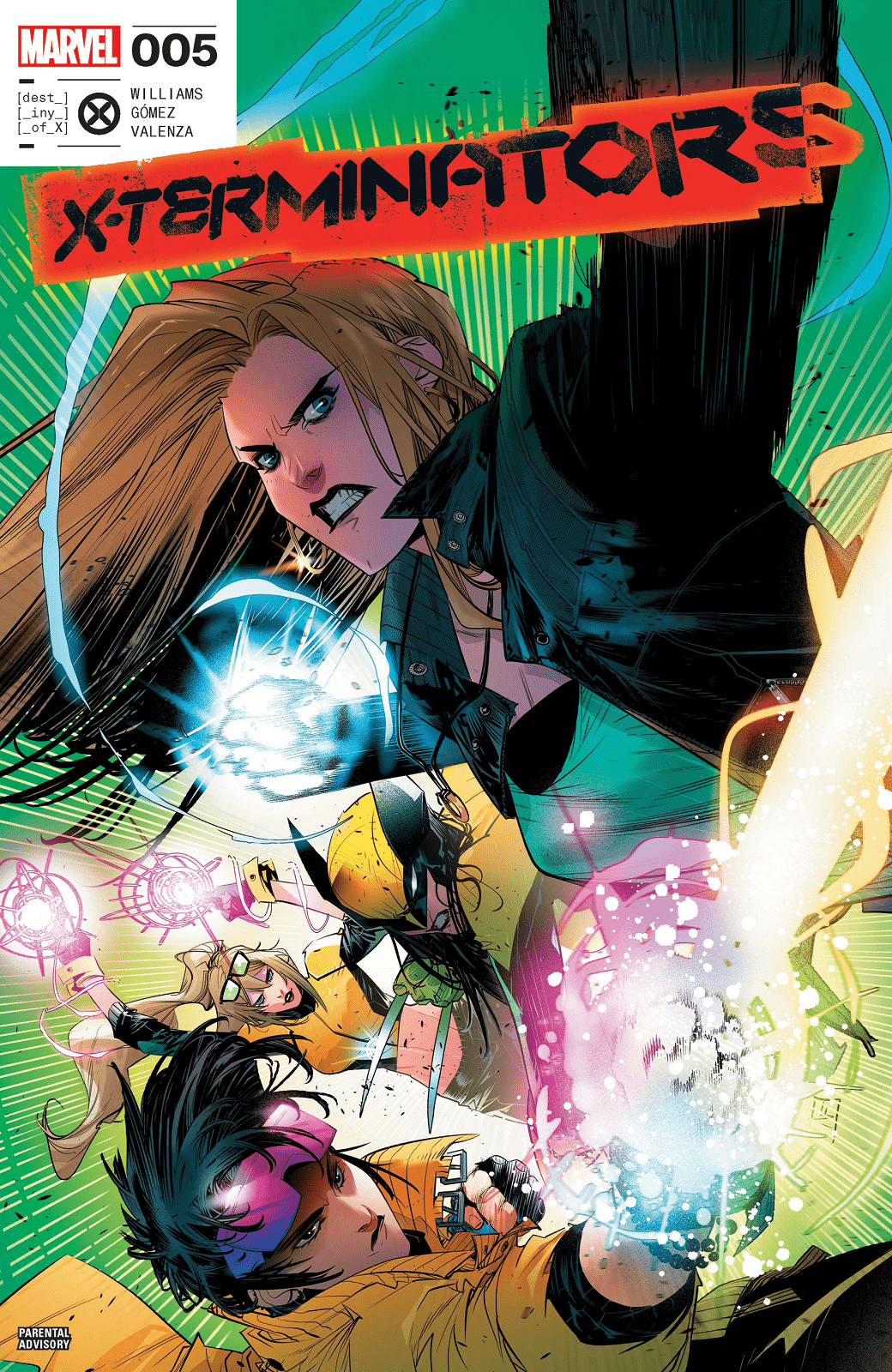 These X-Ladies have been through one HELL of a night…and it’s not over yet. They might have managed to escape the trouble that found them…but that trouble hasn’t escaped them! It’s time to make these suckers regret they ever crossed their paths!

In X-Terminators #5, the story comes full circle as we glimpse the context for the opening pages of the first issue, in which Dazzler roller-skates on a bloody disco floor blasting monsters in her PRAXIS booty shorts. Dazzler has been the de facto leader of the X-Terminators for the entire series, but in this issue, she shines like never before, both figuratively and literally. The rest of the X-Terminators also have their moments, as their violence and raw power are juxtaposed with their cute outfits, silly antics, and acts of friendship. X-Terminators #5 reinforces the series’ themes of teamwork, female bonding, and revenge as Dazzler finally gets her chance to enact vengeance on Alex for breaking her heart. At the same time, Jubilee, Boom Boom, and Wolverine strike back at the Collector for the part he played in Alex’s kidnapping scheme.

Given the violence and gore of the previous issues, Dazzler’s revenge on Alex is perhaps tamer than one might have expected. Yet it’s perfectly fitting for the situation and calculated to hit Alex where it will hurt most. Dazzler shows up at Alex’s bar with all the women he trafficked, who proceed to wreak havoc on the establishment. Demolishing the site of their trauma is cathartic for the women and devastating for Alex, who cares more about possessions than people. By letting these women destroy the bar, Dazzler helps them find closure in a way that also hurts Alex.

The predator has become the prey as Alex runs from Dazzler right into an abandoned disco, where she corners him. His bloodthirsty creatures come to his aid, but Dazzler trounces them, blasting them to the tunes of her “songs to hurt Alex” playlist. Dazzler’s powers permit her to convert sound into light energy. Since the sound she draws on here is her playlist about getting revenge against Alex, she directly takes her emotional pain and transforms it into power she wields against the man who hurt her. Despite the strength and cunning Dazzler has shown throughout this adventure, Alex underestimates her, claiming that she won’t be able to pull him because of his protective amulet. But Dazzler proves him wrong by unleashing a blast so bright it blinds him. Per her agreement with Dracula, she’s not allowed to kill Alex, but she can still hurt him—a point she reinforces when she beats him up with her fists and roller-skates before skating away.

Much of Alex’s violence against Dazzler and the other X-Terminators was the violence of the objectifying male gaze. He forced them to fight for their lives in an arena where they were watched by hordes of vampires excited to see bloodshed. He created mirror duplicates for them to fight, literally objectifying their bodies. He imprisoned them in his Aquarium, where they were allowed no privacy and had to wear the sexualizing clothes he provided. So it is perfectly fitting that Dazzler’s revenge entails blinding Alex and thus taking away his male gaze. He can no longer derive sadistic, voyeuristic pleasure from looking at women. It’s a Freudian kind of castration, and it’s absolutely what Alex deserves.

Alex isn’t the only man who has hurt the X-Terminators. Jubilee, Boom Boom, and Wolverine have chosen to enact vengeance on the Collector, both as a way to keep him from rescuing Alex from Dazzler and simply because the Collector deserves it. They accomplish this with Magik’s help. Though Magik hasn’t been part of this adventure until now, she has also been hurt by powerful men and is eager to help. Her assistance in this plan reinforces the series’ themes of solidarity between women. By working together, the women can defeat the Collector. Jubilee steals the show by unleashing her power on an atomic level and obliterating his spaceship. His godlike powers likely prevented him from being killed, but his precious collection of objects is now gone. Like Alex, the Collector cares more about things than people, so the destruction of his collection is a fitting punishment for him.

After vengeance is dealt with, the X-Terminators celebrate with a drink at the mostly-demolished bar. Little details like Boom Boom dressing Jubilee in new clothes after hers were destroyed and Wolverine cheerfully calling the others “sluts” show how these women have grown genuinely fond of each other throughout their adventure. It’s almost sad to see the end of such a vibrant and fun miniseries, but this issue provides a satisfying conclusion.

X-Terminators was exactly what it advertised: sexy, violent, and ridiculous. This final issue leaves the story's heroines victorious as they finally get vengeance for the hell they were put through in the previous four issues. It's uplifting and delightful, and though it's a satisfying conclusion to the story, it's so good that you can't help but want more.