X-Treme X-Men #1: You Were the Wind Beneath My Wings 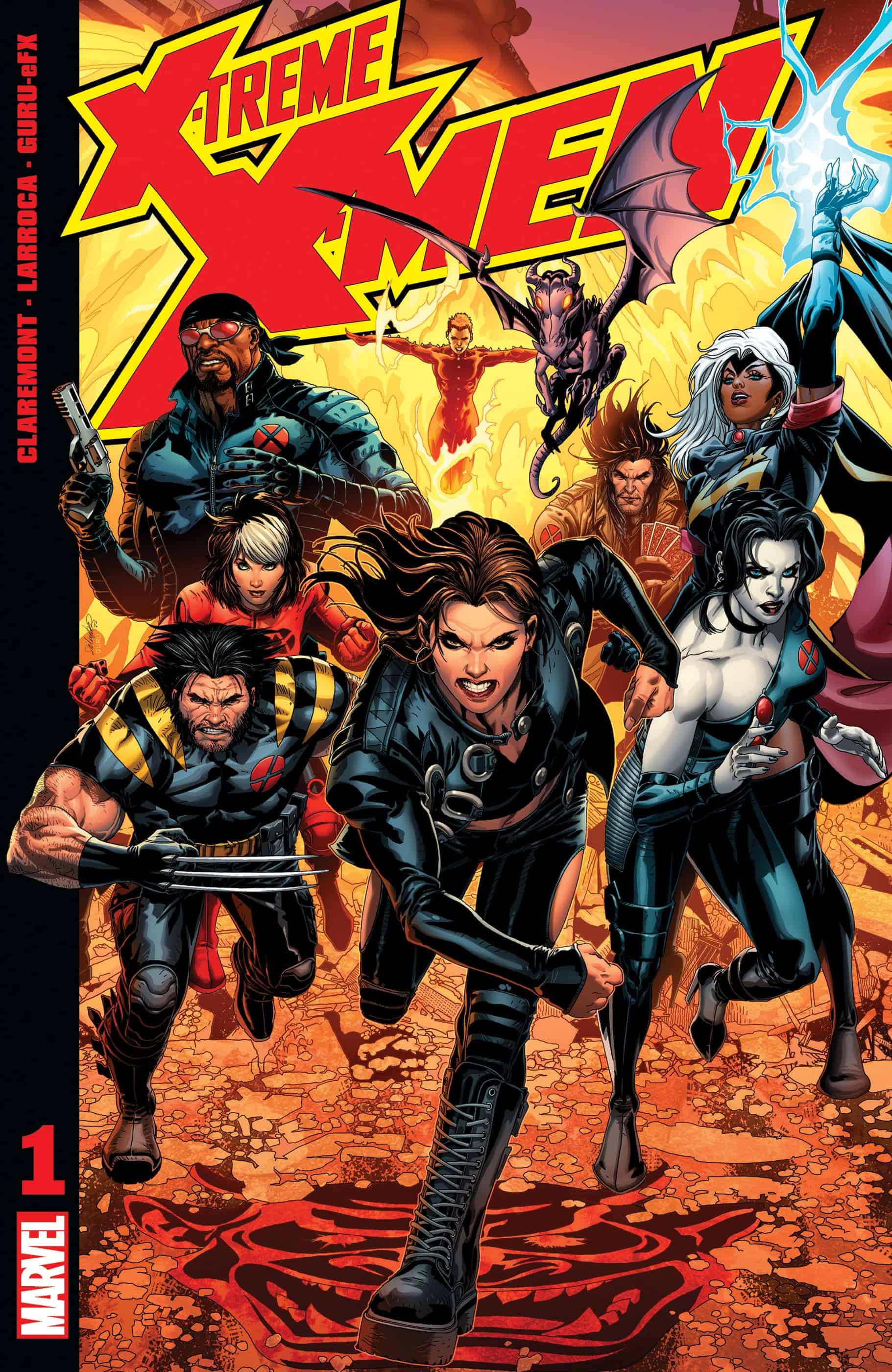 The X-Treme team is back! Legendary X-scribe Chris Claremont reunites with artistic dynamo Salvador Larroca for an all-new story set just after the groundbreaking original run of X-TREME X-MEN! A powerful psychic attack on Kitty Pryde from her old enemy OGUN brings the X-Treme team back together for a high-stakes mission…but what secret is Ogun hiding, and will even the combined might of Bishop, Sage, Gambit, Rogue, Rachel Summers, Storm And Wolverine be enough to stop his insidious plan? The X-citement starts here, with the kickoff to the arc that will have wide-reaching implications for some of your favorite X-characters!

It just took eighteen and a half years, but X-Treme X-Men #47 (or vol. 3 #1) is back on the stands, from the pair that started it all, all things X-related Godfather, Chris Claremont, and superstar artist Salvador Larroca. When last we left the X-Treme team, they had just freed Rachel Summers from the thrall of Elias Bogan, and became an internationally sanctioned mutant peacekeeping force who were getting ready to move back to the Mansion, and the Uncanny X-Men title, where we’d slowly head to the No More Mutants era, and be stuck in an ongoing rut where the Mutants would be caught in an endless loop of continuous extinction event storylines for the next decade. Luckily this takes place before all of that nonsense, so let’s go back to that simpler time, shall we… 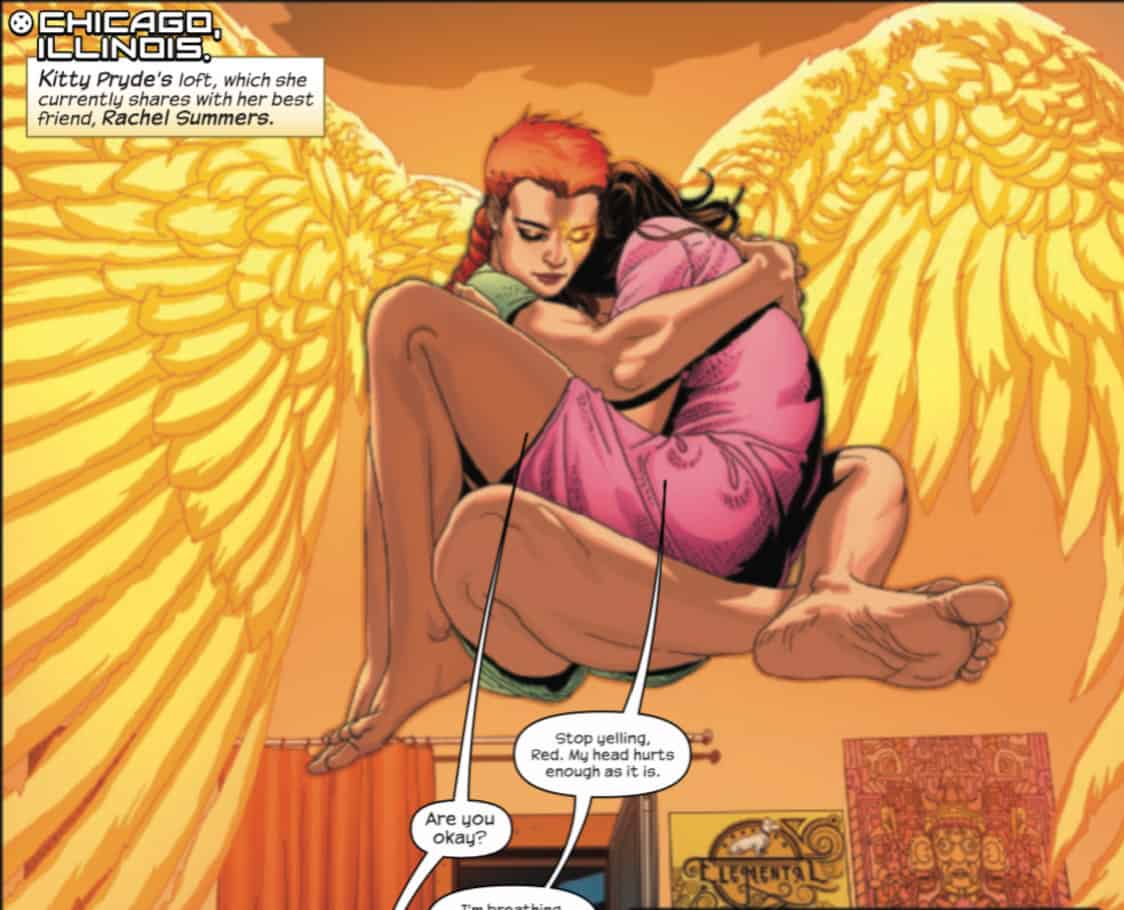 Spread your wings and prepare to fly, for you have become a Phoenix

As with the recently concluded Gambit mini from Chris Claremont, this two is a tale told between the pages, with the mission statement of giving us a complete tale told from this bygone time, but not to lead into something that would contradict the continuity from the issues this story directly precedes, and to that I say, job well done. The story has a few hiccups, like the glaring missing cast members, Cannonball, Sunspot, and Magma (who had regained her identity of Amara Aquilla in this run), but it’s the first issue of this new mini, and they could show up in the rest of the mini as the issues are released. Otherwise I have very few complaints regarding the rest of the cast. Everyone else here feels exactly how they should. Like old friends I’ve missed for far too long.

The plot here is pretty simple: Kitty Pryde’s in a fight for her soul against the mystical Japanese demon Ogun, who once stripped her of everything that makes Kitty who she is, for the pliable host to become his prize assassin. With the help from Wolverine and Yukio, Kitty was able to resist Ogun’s psychic grips from taking complete control of her, and freeing herself, leaving Wolverine from delivering the killing stroke, freeing Kitty from his clutches… or so we thought. Ogun was not exorcized from Kitty that day, but he found a way to sit there, waiting, biding his time, until he was ready to take over, and make Kitty the greatest assassin the Marvel Universe had ever seen. Will he be able to succeed? No, of course not. We know where Kitty goes from here, but that doesn’t mean we can’t enjoy where this tale will take us.

I’m a Claremazon, who worships at the temple of St. Christopher of Claremont, who will read anything X-related with his name on it. Claremont and Larroca had a relationship that Claremont had stated was one of those unique relationships that was kismet, describing it as something akin to what he had with Alan Davis or Dave Cockrum, so seeing the announcement of the two of them together again got me giddy with anticipation. Now, every writer has their own stylistic tics. Bendis has his… dialogue, and having characters rip their opponents in half, Hickman has his characters terraforming Mars, while Claremont loves to have his character’s mind controlled by some outside force, one of which happens to be Ogun. After seeing the Shadow King using his greasy mitts all over the recently concluded Gambit mini, when he was palling around with a Storm that was stuck in her de-aged body as a pre-teen, whose control of her abilities was… less than nominal.

While the Gambit story had a more whimsical tone, the tone Claremont establishes here is far more heady, and feels like there’s bigger stakes. No longer are we watching the development of a childlike Storm with the ne’er-do well-rogue (bad pun) Gambit, stealing up and down the Mississippi River, but instead we see this family rallying around one of their own. These characters’ deep devotion to Kitty, and their willingness to do anything to help save her from this psychic monster shines bright with every page, giving me goosebumps. Claremont feels on point with this issue, hopefully that remains for the rest of this mini.

Salvador Larroca is here to knock us off of our socks. Larroca had a certain style up until he partnered with Warren Ellis on NewUniversal, and took up a more photorealism that he stayed with up until fairly recently, where he’s returned something of his original mixed with the latter. He retains that style here, which is a breath of fresh air. There are a couple of examples, like with a panel that had Lila Cheney, that was a bit suspect, but they were few and far between, so that it didn’t distract from the overall story. If this is the opening salvo, I can’t wait to see what comes next.

The team supreme is back! Chris Claremont, the writer that created the biggest franchise in comic history, returns to his critically acclaimed title, X-Treme X-Men with series co-creator Salvador Larroca, to blast off with an untold tale that takes place immediately after series finale #64 from 2003. The team gives us a gripping tale swirling around Kitty Pryde, and the psychic vampire, Ogun, who has been secretly imbedded in Kitty’s soul since their first encounter. Can they save her from him, and his clutches?

X-Treme X-Men #1: You were the wind beneath my wings