The X-Men face imprisonment with no back-up other than She-Hulk; Iceman steps in to ensure things run smoothly; and Scythian is heading for Earth to wreak his revenge after escaping from the Negative Zone! 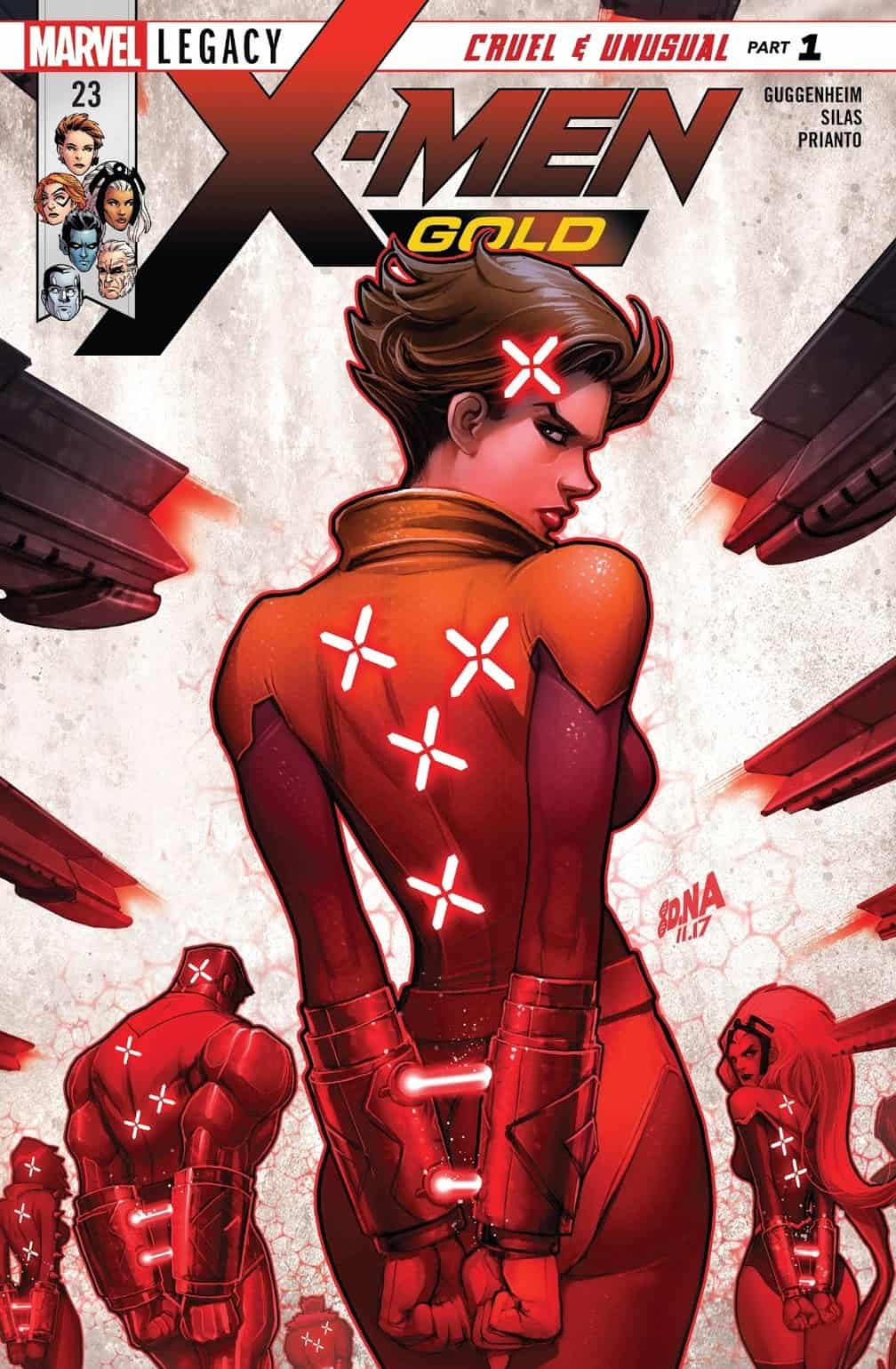 What You Need to Know:
After a resounding defeat at the hands of the new Brotherhood, the X-Men find themselves under arrest thanks to being duped into attacking an N.Y.P.D. swat team by Mesmero. Detained in The Box, a new mutant correctional facility, they have received the unwelcome news from Jennifer Walters that they have little choice but to cool their heels and have faith in her and the justice system. Meanwhile, Scythian has breached the Negative Zone and is heading their way to literally impose the wrath of a God.

What You’ll Find Out:
In the cold reaches of space, the Dartayan god Scythian is merrily wending his way through the solar system towards Earth, with one thing on his mind. The destruction of those who tried to destroy him. But he may have to get in line. The X-Men are currently incarcerated in the Robert Kelly Correctional Facility, otherwise known as The Box. As the gun-toting guards attempt to intimidate Kitty with threats of repercussions for those who make waves, she is less ‘phased’ by this than they would like, given its less than impressive track record in retaining its inmates. She is more concerned with her bunkmate, however, as they escort her to her cell to be met by none other than the ocularly challenged mutant Callisto. 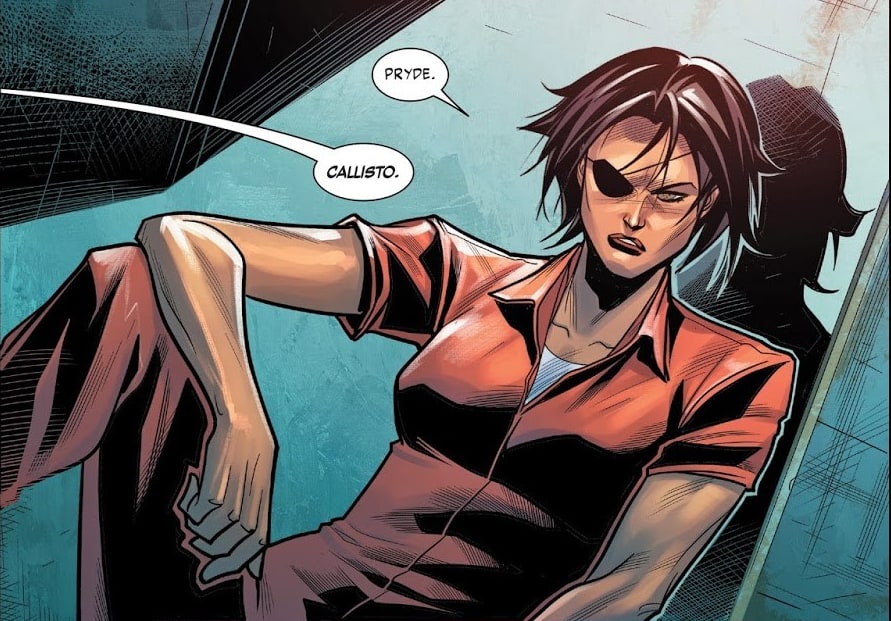 Cal balks at Kitty’s assertion she has tried to kill her a million times and jokes it was only once or twice while feigning hurt at Kitty demanding a different cellmate and points out this should be the least of her worries. When Pryde says she isn’t scared Callisto informs her there are many inmates who are keen to take on the X-Men. Which is something Rachel and Storm seem to be experiencing first hand. As they sit so clearly hated and scrutinized in the mess hall Rachel feels a twinge of pain and Storm expresses concern. Rachel passes it off as side effects of Mesmero tampering with her, whilst experiencing a flashback of her mutant hunting Hound days. Convincing Storm it’s nothing to worry about the changes the subject and tells her they should go find Kitty. 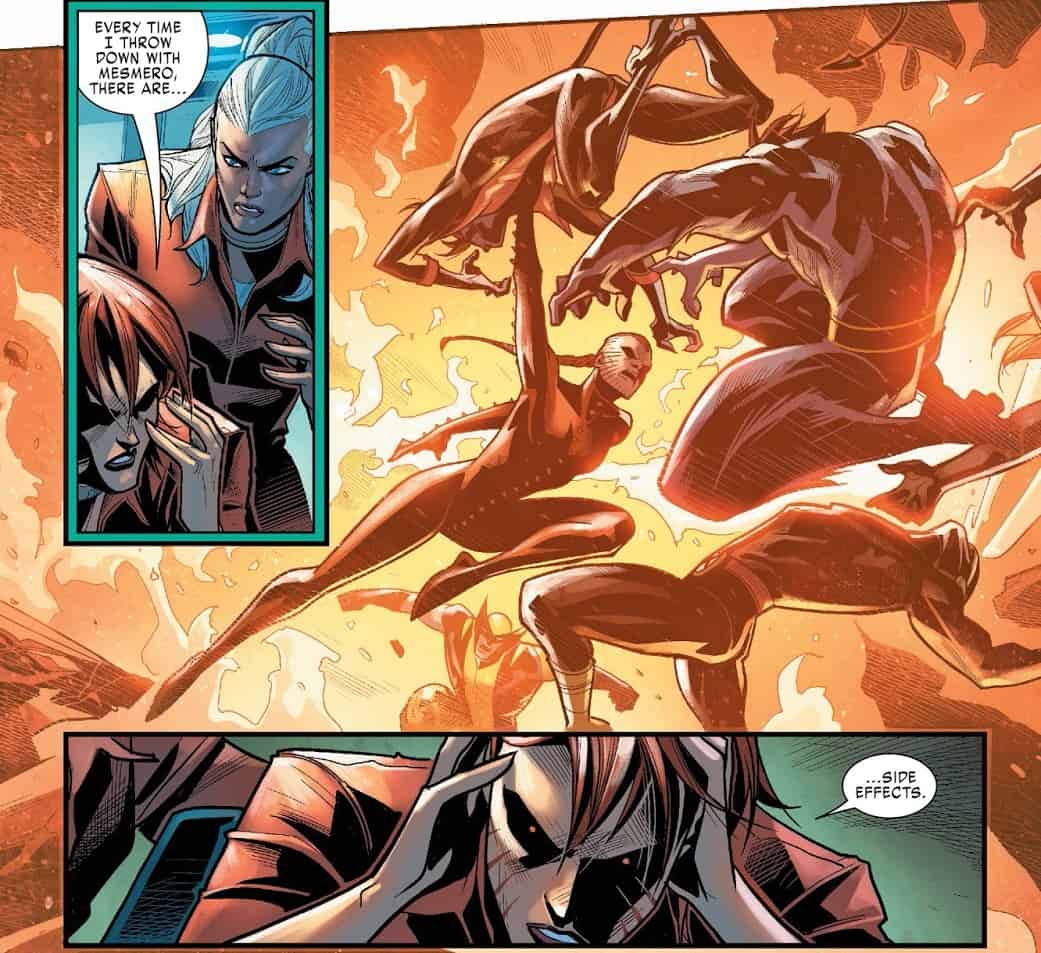 Back at Xavier’s and Iceman has arrived, fresh from LA and debating his chances as interim leader of the team, as requested by Kitty while she is away, only to be welcomed by Rogue. As he asks her for a sit-rep she tells him Jen Walters thinks it may be a while before the team return and he jokes on the choice of a ‘has been’ holding the fort. When she reminds him she leads an Avengers team he explains he was actually talking about himself. Asking who is unlucky enough to get called in as backup he walks in to find the answer waiting for him. Among them is Ink, who questions being called the B Team as Bobby invites them all to the Danger Room. Similarly, the incarcerated and power dampened Colossus and Nightcrawler are also being tested by the male population of The Box.

After seeing them making short work of four thugs, the rest of the inmates reconsider their options, but Peter doubts their luck will hold another day. Not faring so well back in the X-Mansion are the reserve X-Men. Iceman calls it pretty accurately as he surmises the Magneto simulation is about to get the better of Magik and Armor and jumps into the melee in time to be taken down a peg or two himself. As Rogue makes a play for the brass ring Iceman shouts a warning and ends the simulation. As the team goes through where they went wrong and having a stark reminder of why Danger Room training is so vital, they are interrupted by Anole who informs them they have a visitor. 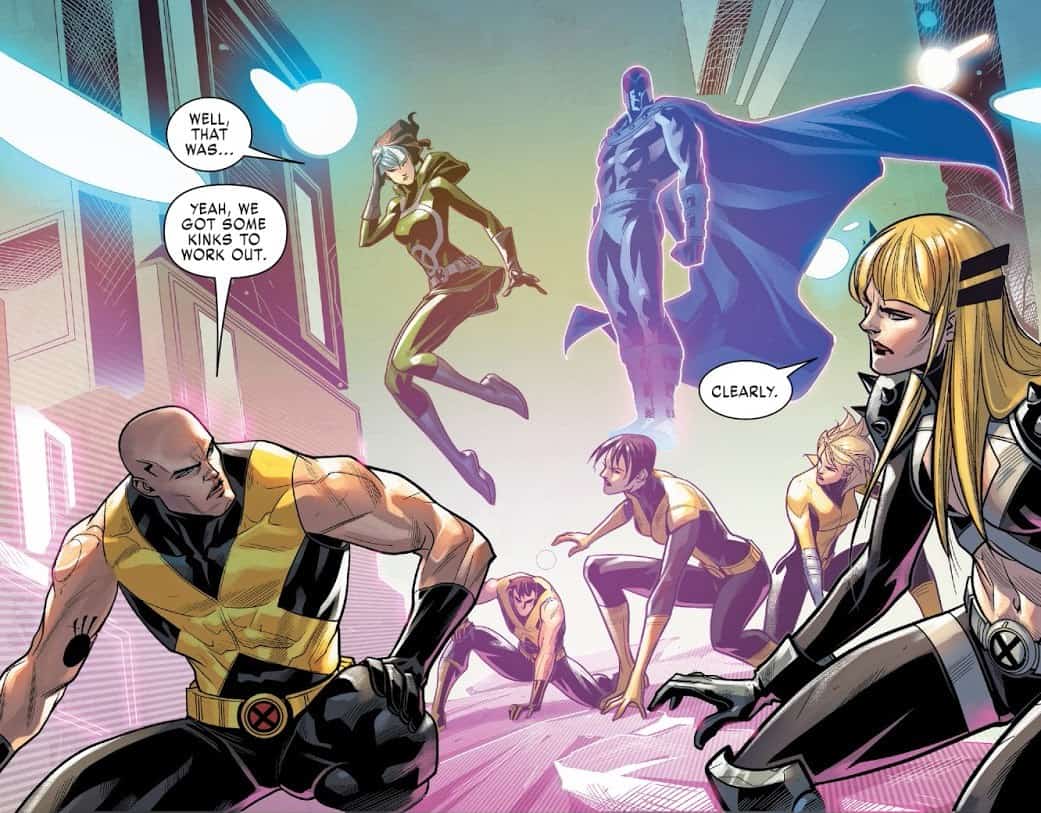 Rogue goes to see who it is only to be faced with Simon Lasker, the new Pyro. Joining them in the professors study Iceman is none too pleased to find out who has paid a visit. Despite Simon’s protests about his culpability, he is given a reminder of where he should be and that the X-Men are suffering in his place. When Simon asks for the chance to right the wrongs he has committed Iceman refuses. Rogue takes the opposing view and defends him, reminding Bobby the raison d’etre for the X-Men is all about reformation. Despite his assertion that her case is different she goes on to joke she was actually thinking of Logan. Bobby relents but insists he will be watching Simon. 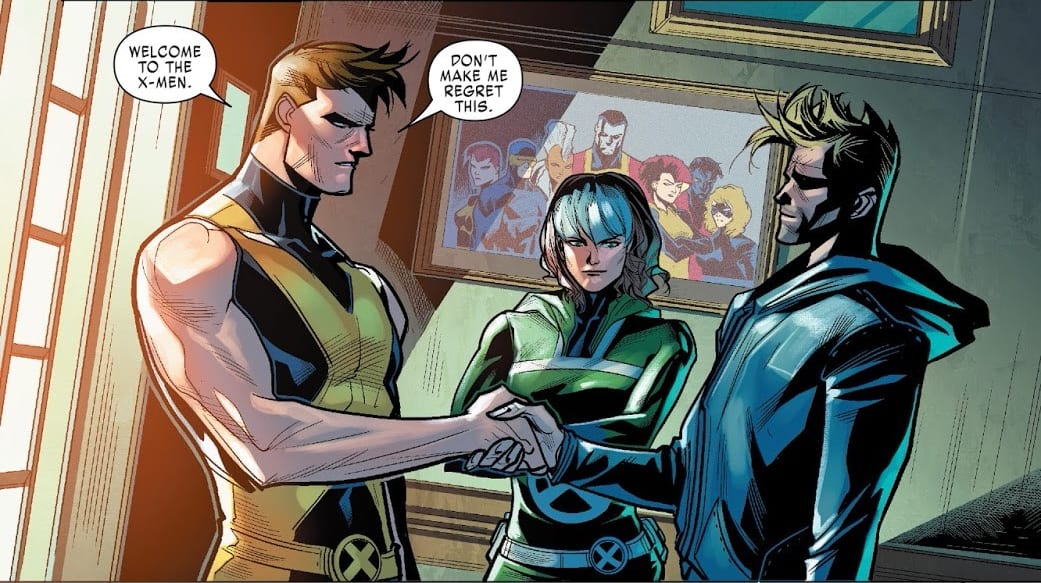 Before we are returned to the prison we cut to Ivan Guerrero (The Shredded Man) trawling through the subway system under Manhattan. Last seen in Uncanny Avengers, he now seems bent on some dastardly plot against the citizens who live above. At the same time Storm and Rachel are just finding out from Kitty who she is sharing sleeping space with, just as the lady herself shows up with a warning. The alpha inmate and woman responsible for Cal herself spending a month in the infirmary has rocked up to exert her dominance by challenging our gals. 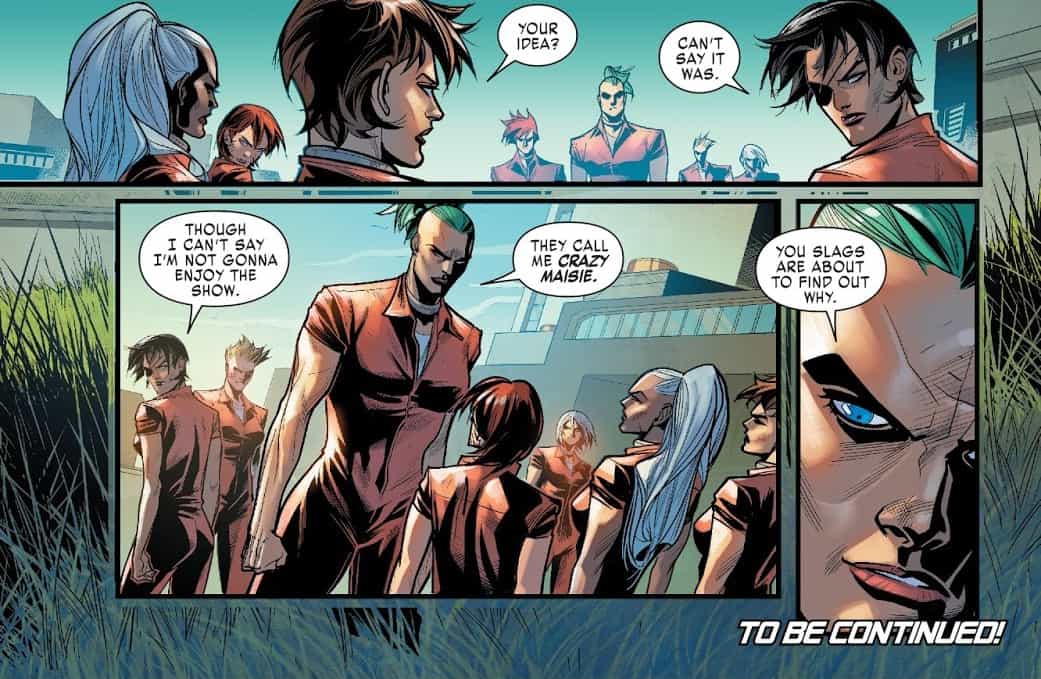 What Just Happened?
Interesting to see Amara didn’t get arrested, but as she wasn’t actually involved in the fracas with the police last issue, that makes sense. Also a good nod to Rogue’s past having her speak up for the new recruit. Though hopefully if he’s in the field with Magma her powers will be represented properly and we will not just have two fire-related X-Men together. She has the potential to be great at last and make up for the way she behaved last issue, though Pyro clearly has more to prove. Also, Bobby and Simon will be interesting to see in the field, fire and ice, literally. Similarly, it’s so good to see Illyana back on a team and active. She has been severely missed lately. As some of my favorite EVER X-Men just happen to include Colossus, Nightcrawler, Rachel, Iceman, and Magik, it’s safe to say the new line-up has me just a little excited here. I am only waiting for Havok to knock on the door and I might just go into overload. And it was heartwarming to see the photo of the old school looking down to add emphasis as Rogue reminds Bobby exactly what the X-Men are all about. The addition of an ex-villain to the ranks could make for an interesting time as the X-Men are apparently back in the reformation game. 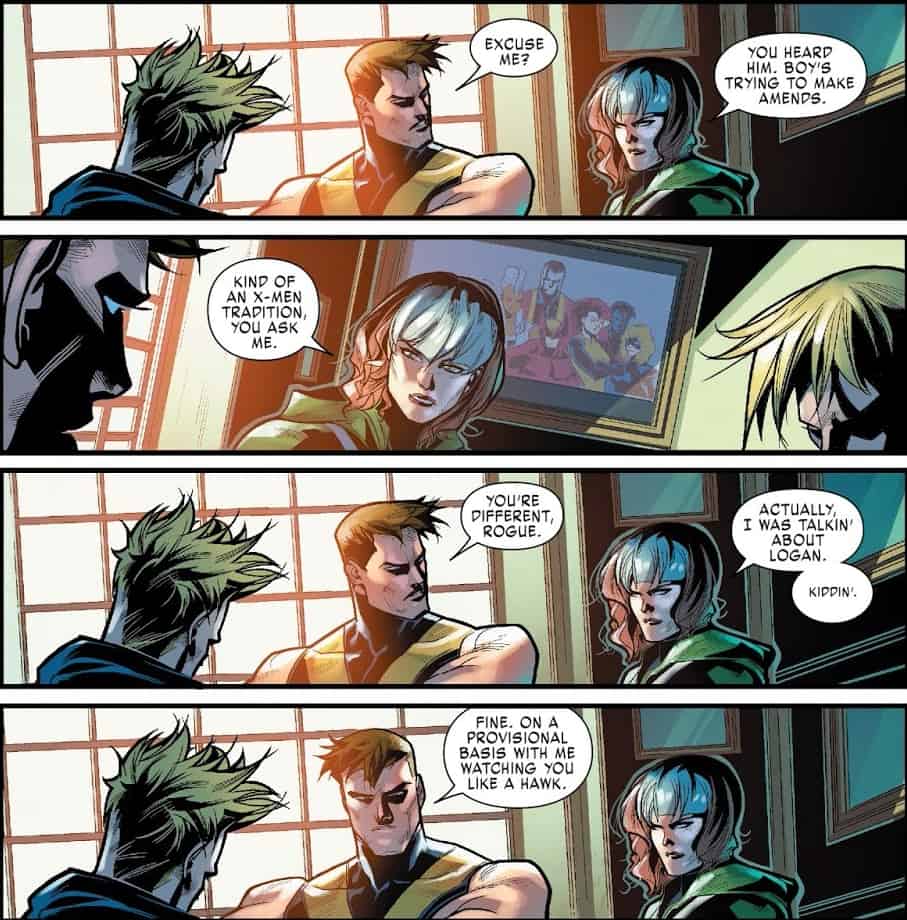 Speaking of reformed, the Robert Kelly Detention Centre? Given that when he died he was actually a reformed mutant hater I’ll be interested to find how The Box became his namesake. Seeing Callisto and Storm in a prison setting together hearkens back to grudge battles of old and I for one would be happy to see a rematch. I’m confident that Guggenheim won’t disappoint here. But before that, I think it’s safe to say we will see a new top dog in The Box when Storm takes out Crazy Maisie…can we take a minute and deal with that name please, did Kitty suggest that? Eagle-eyed readers may also have spotted a familiar Morlock amongst Maisie’s lackeys. Bliss, last seen on Utopia, very nice touch there. Also, Callisto and Kitty sharing a cell? Can’t wait to see Peter’s reaction when he finds his fiancée and his ex-girlfriend are roommates!!! Also, The Shredded Man is trawling around near Callisto’s home turf. Coincidence? Scythian is between 300 to 600 million miles away so we could be talking some serious Claremont style plot building here. But the Shredded Man looks to be a more immediate threat. 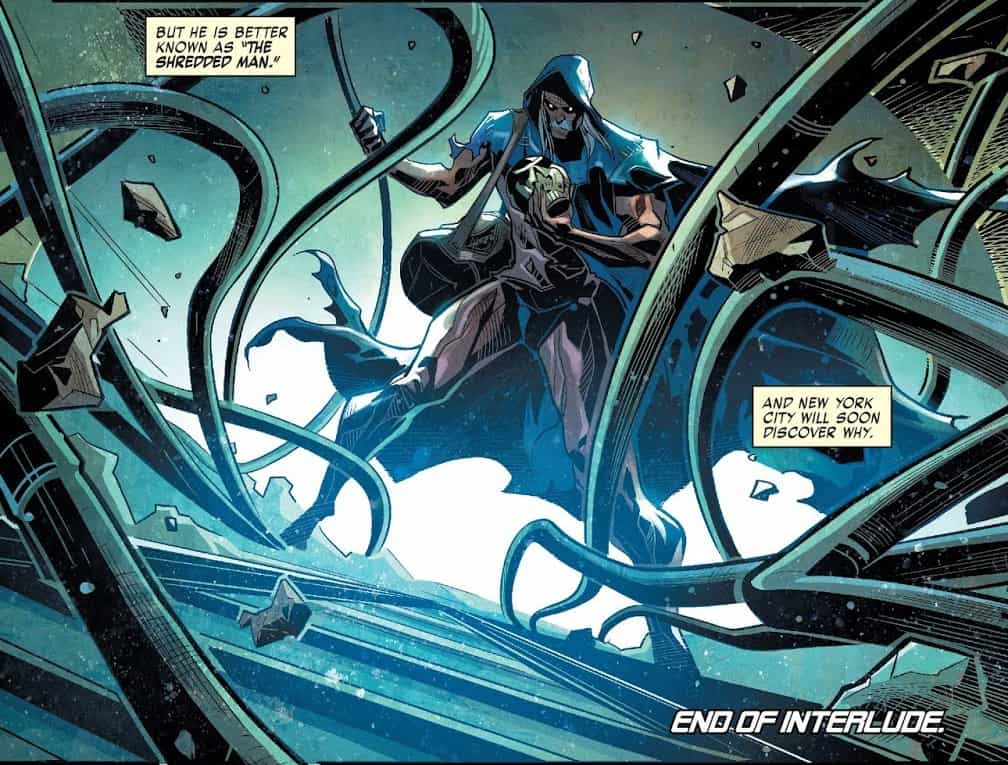 This title has made a humongous turn around for me this issue. The addition of Thony Silas is a welcome one here as the art has been great so far but has taken a step up with this totally different style. Especially when half of the characters aren’t discernable by colorful outfits and all wearing the same orange overalls. The facial expressions are all important when there isn’t that much action going on and he has done an admirable job of showing that here. As well as Simon’s clearly uncomfortable expression as he begs to be allowed the chance to reform, seeing Storm in familiar proud regal form standing out amongst the crowd is a sight to behold. It almost surpasses a few issues ago and her solo fight for survival after the Dartayan incident, not to mention seeing Colossus and Nightcrawler victorious over the rabble, without powers but far from powerless.

And as usual, colors have stayed consistent and always a strong feature of the art thanks to Arif Prianto. Major kudos goes out to Guggenheim for having Callisto call Kitty “pretty” seeing as Callisto’s creation took inspiration from Anita Pallenbergs portrayal of the villain The Great Tyrant in Barbarella, an ebony-haired knife wielding villain with an eye patch and a penchant for de-feathering angels.

Final Thought: As prison stories go this is looking to be an interesting one and I’m sure Storm will be taking her familiar fighting stance very soon. Put ‘em up Cal, you could be in for a rough ride!