Year of the Villain Black Adam #1: Da Nile is a River in Egypt

Year of the Villain Black Adam #1 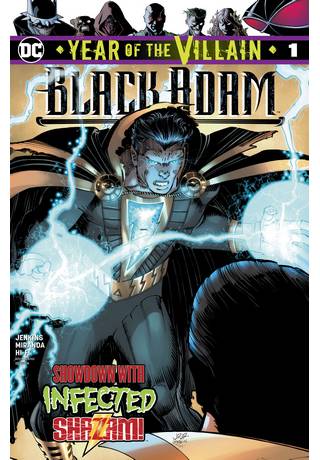 Billy Batson has been changed into the Shazam Who Laughs! Now, he takes off to bully Black Adam in his home country of Kahndaq, hoping to stir up some kind of trouble.

Some of my favorite stories have been written by Paul Jenkins. Unfortunately, this isn’t one of them. I didn’t hate it, I just don’t think it’s up to his normal standards. The story itself just sort of treads water, floating in the same place and not going anywhere. Billy Batson/Shazam is actually the villain in this book, while Jenkins turns Black Adam into a sympathetic character who’s also a patriot and a champion of the people. I’ve been reviewing most of the “Year of the Villain” one-shots and I have to say, this one isn’t one of the stronger ones, although it is different because Black Adam is actually the hero of this book.

Artist Inaki Miranda does a pretty solid job this issue. You can tell he’s influenced by artists like Scott Kolins and John Romita, Jr. (Who supplies cover art for this issue) After this book, I’m pretty sure Miranda is pretty tired of drawing sand. Again, Miranda is a solid artist, I just wish he’d had more to work with this go-round.

Good, but not great. This book could've been a lot of fun, but unfortunately, it missed the boat. If you're enjoying the Year of the Villain specials, pick this up. If you're just a casual Shazam fam, I'd recommend picking up the regular book or even Batman/Superman instead.

Year of the Villain Black Adam #1: Da Nile is a River in Egypt