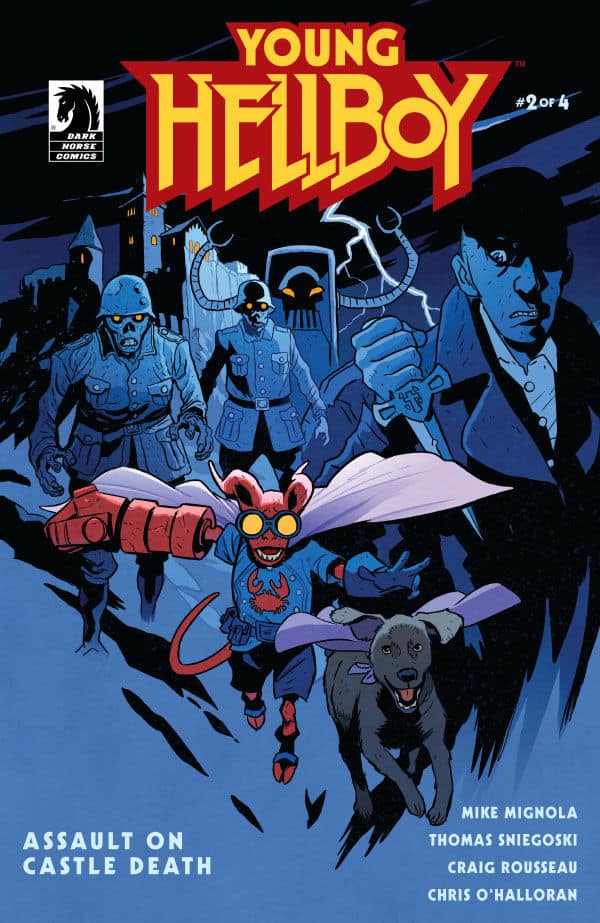 Previously Hellboy and the Professor moved with the B.P.R.D. from New Mexico to Connecticut. Hellboy is exhausted from the journey. Is it the youth and weariness of the travel that has him feeling down? Or is it something supernatural that has ahold of him? All the while, the news of Hellboy surviving reaches an unsuccessful entity. Someone who attempted to murder Hellboy is persistent and unwilling to fail again.

Opening up to Connecticut, Hellboy seems to be feeling better. Or is he fever hallucinating? Throughout the book, you realize that he is confused and following someone who isn’t there. Going off on his own, looking to be a hero and encounter danger while sick, is not the best situation for Young Hellboy.

After all, he is a little kid, powerful sure, but he doesn’t even know what he’s capable of. The fear of Hellboy’s unknown abilities and future are exactly why “holy” men have when dealing with demons, particularly the ones looking to end the world and start the apocalypse. If Hellboy wasn’t hallucinating, he might have already been captured or killed.

Mike Mignola does a phenomenal job with this character, and I can’t rave enough about it. Hellboy is my favorite indie comic hero. Mike Mignola, between Young Hellboy and Adult Hellboy stories, you can’t go wrong. Every adventure and disaster that this character encounter draws you into the story.

I like in this issue that Young Hellboy’s adventure is unscathed. Even though it’s a fever hallucination, it is still invigorating. My only hope is that the Professor will learn he is not in bed in time for when the real villain to reveals himself to everyone.

Throughout Mignola’s career, he’s worked with many artists each of them serves this book well. But I genuinely love Craig Rousseau’s work with this book. The innocence of childhood captured in a dark comic like Hellboy accomplished the scenery and imagery Mignola delivers with Young Hellboy. He is a kid, a young boy. All he wants to do is fight crime and fit in. This dynamic duo gives the readers that feeling.

Overall, Mignola is giving us the youthful experience with Hellboy we want. This story is well written, and I am curious to see if the illness Hellboy is struggling with is inflicted or just him being a kid.