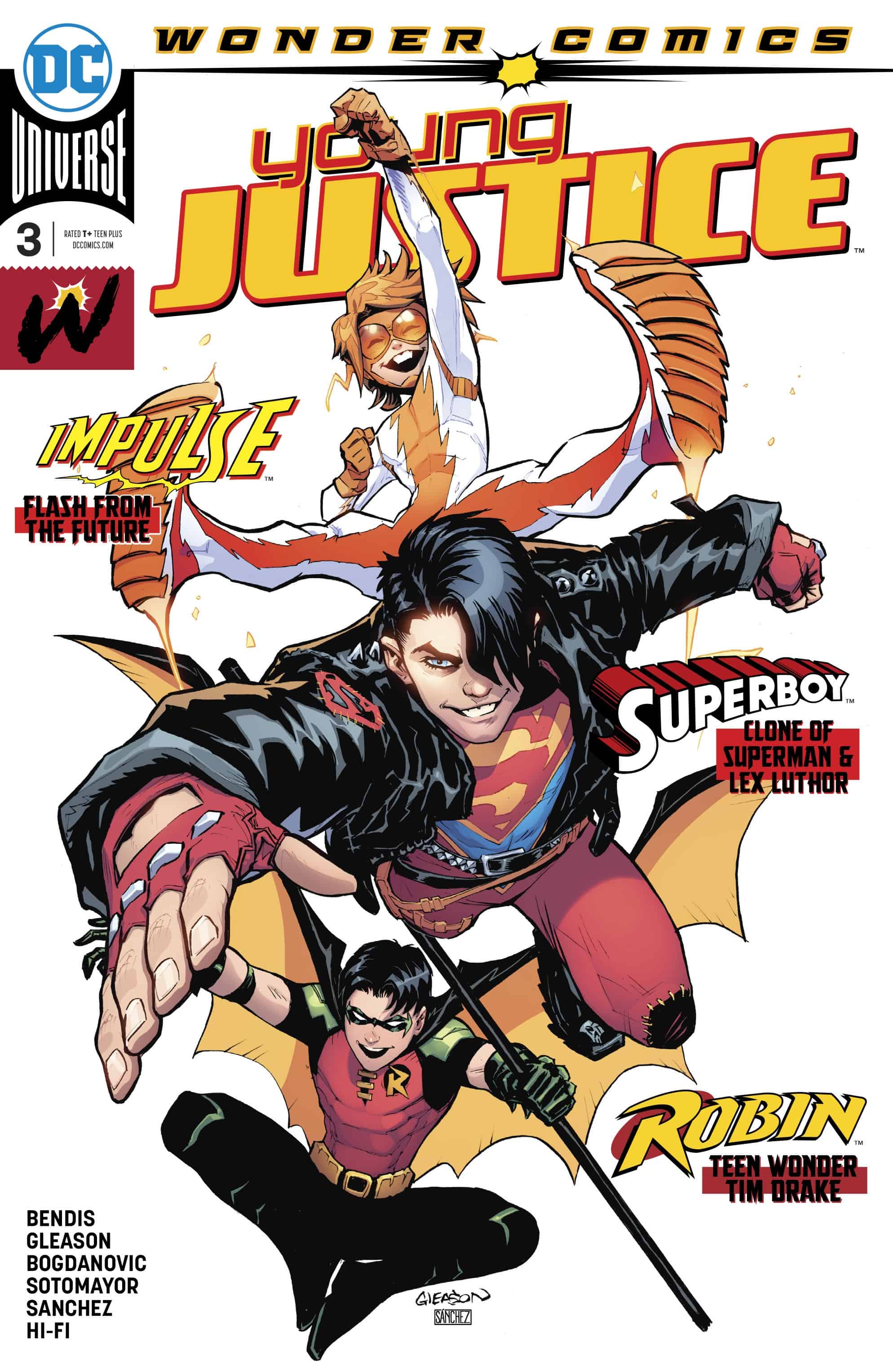 Young Justice is back, baby! Bendis and Gleason reunite all your favorites in one place! Robin (Tim Drake—the best Robin) and Amethyst (best Princess of Gemworld!) team with Wonder Girl, Jinny Hex and the new Teen Lantern (not even close to the best Green Lantern) to take back the mysterious Gemworld from the evil forces of dark Opal. Meanwhile, the reunited Impulse and Superboy have a lot of explaining to do. Also in this issue, find out where Connor Kent has been all this time. This is a big issue for Superboy fans!

Superboy steals the spotlight in Young Justice #3 as the rest of the team find themselves imprisoned on Gemworld! 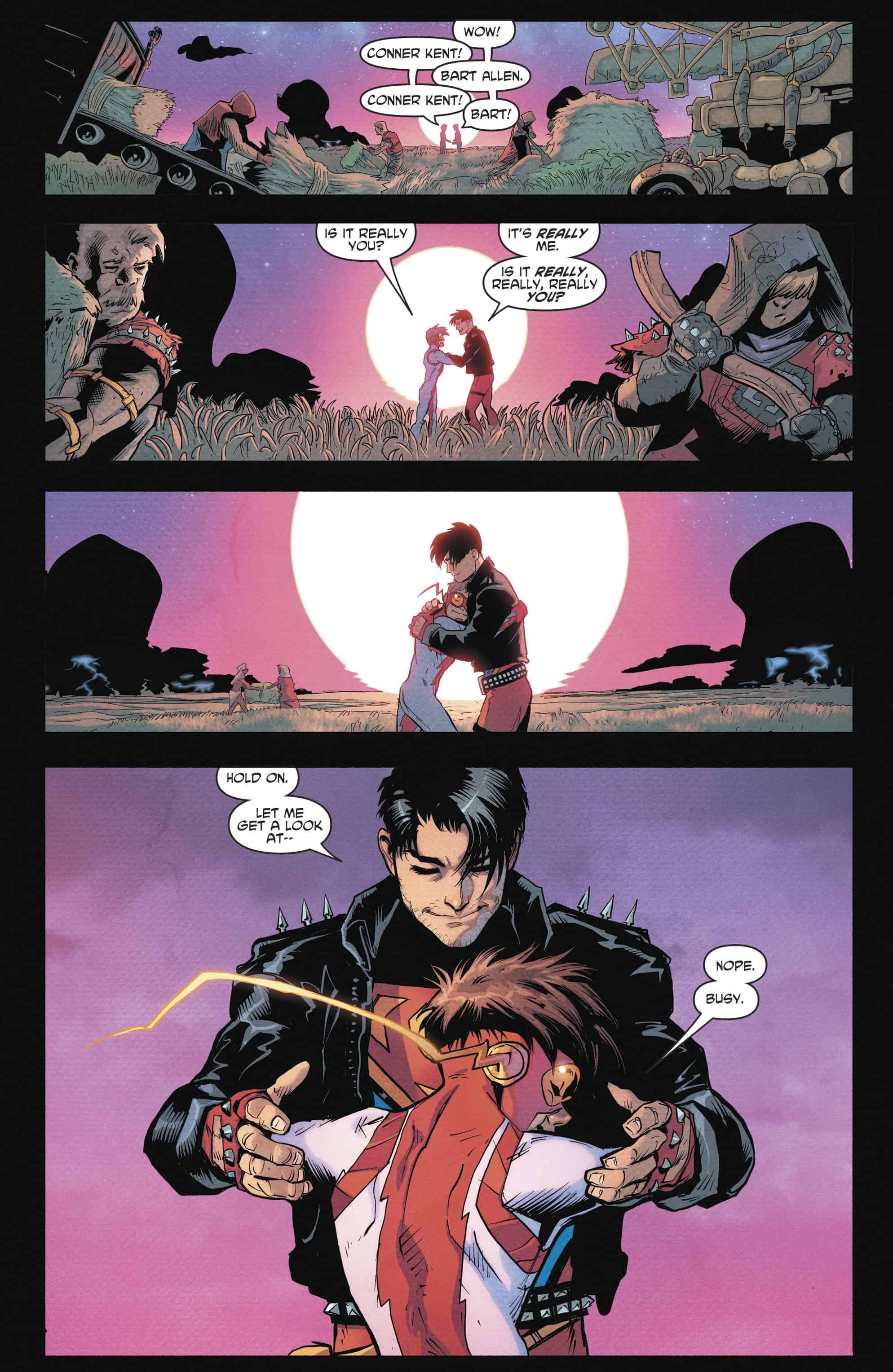 An explosive first issue of this series quickly led to the Young Justice team being thrust into another dimension and separated on the planet known as Gemworld. Writer Brian Michael Bendis has used this dire scenario to not only expand on the individual characters, but also their relationships as well. The interaction we see from Impulse and Superboy at the beginning of Young Justice #3 is a great example of this chemistry at play. Their emotional reunion adds heart to the issue’s story, but it also opens the door to explore Superboy’s rather tedious circumstances.

There has been a lot of debate about how such a series can fit into the canonical DC timeline of events, and this seems to be the series’ first real attempt to delve into some of the answers fans are looking for. The creative team takes us from the T-shirt wearing Connor Kent to the moment he adorns his classic leather vest, then reveals how he was sent to Gemworld in the first place. It’s a full-circle moment that sheds light on what Connor Kent has been through and how he has been forced to adapt since his decision to leave school so long ago. However, with the inclusion of his wife and child, it looks like there is still plenty to learn about his time on Gemworld.

Superboy’s prominence in the story may be the most intriguing aspect thus far, but this is beginning to impact the other characters as they get lost in the commotion. To be fair, this is an issue I’ve mentioned since the release of Young Justice #1 as well. Ensemble stories such as this tend to break the larger team up into more manageable groups to advance the narrative, so while I understand what the creative team is doing, I still hope we are now moving towards the team’s full reunion.

Although the artistic talent has been well discussed, Gleason and company still deserve praise for consistently delivering one of the best looking books on the shelves. The visual spectacle has even contributed to the story’s potentials, showing a distinct and interesting difference between the alien-like Gemworld and a more familiar Earth setting.

Overall, Young Justice #3 is a solid story based around the long-hyped mystery of Superboy’s appearance (not just the new beard!). This is a story that works well for Bendis in particular, allowing him to lay the groundwork needed while keeping the pacing interesting enough to engage readers.

Young Justice #3 focuses on Superboy’s past, and current situation, to delve into what has kept him on Gemworld. Although the other members take a backseat, the story is able to explore the impact of their relationships in a unique way, showing that heart will continue to be the driving force in the series.