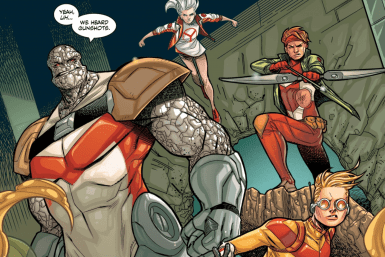 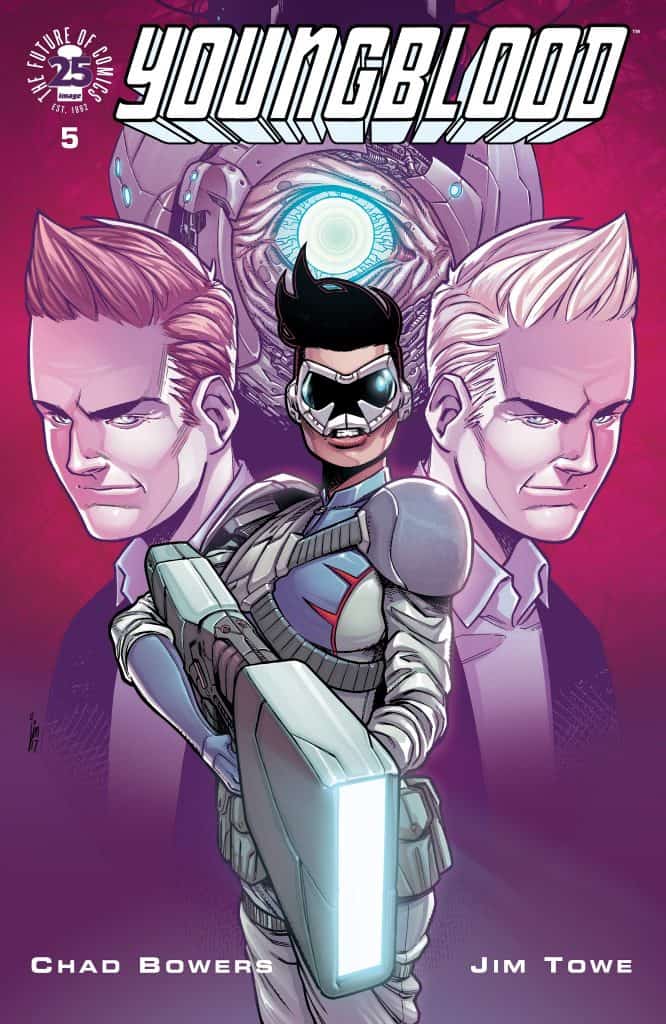 What You Need to Know:
Youngblood has been censored. Despite the moratorium issued by the new commander in Chief, President Diehard, one woman has decided to ignore mandate for the sake of saving Man-Up, a friend held captive by Brynetec, the offspring organization of the now defunct Cybernet.

What You’ll Find Out:
Despite all the warnings, Youngblood doesn’t know when to quit. The newest team having received the blessing of veteran member Badrock makes the first formal move as a unit and confronts Bryntec. Arriving just in time to save a badly injured Vogue and Sentinel, the encounter gets far more serious as Diehard arrives. The president is angry at each of them, particularly Badrock and Shaft, for having disregarded his executive order to remain inactive. Badrock is taken by surprise and is quickly dispatched. Shaft alone faces his former comrade.

Suprema and Doc Rocket contend with the Chapels who are a match for both as Vogue cuts off the brothers attempt to escape. After Vogue’s last inquiry is met with snide arrogance, Petra puts a bullet squarely in his face. By all accounts the wound that should be fatal reveals that the brothers are cybernetic and merge together, becoming a giant and massively armed robot. Doc Rocket and Suprema quickly shift focus to intercept the new threat but each are defeated with one blow. 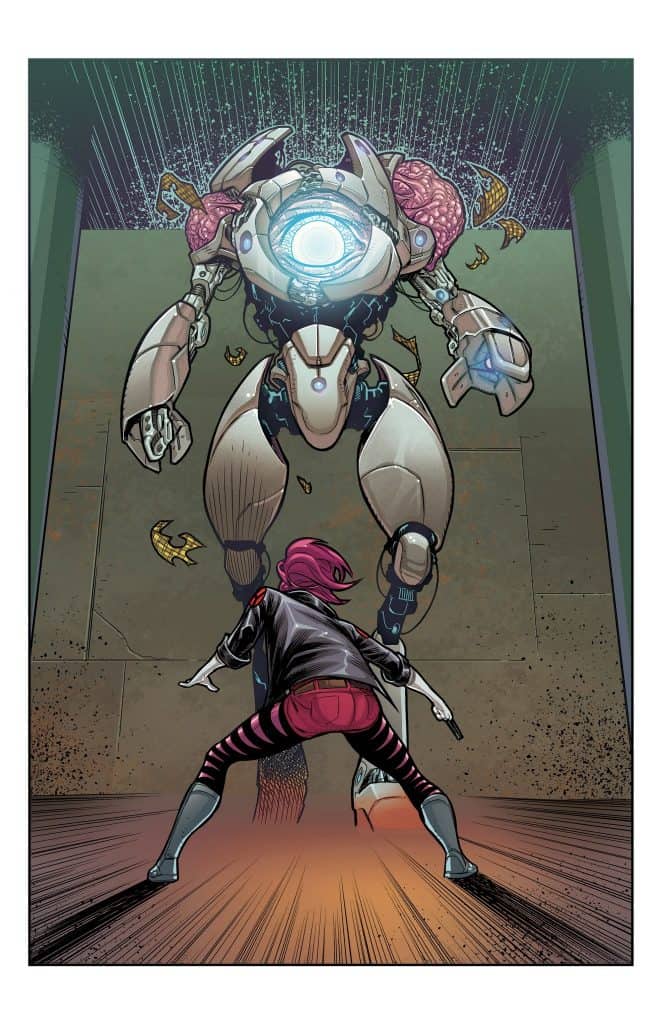 The spectacle has drawn a large crowd of onlookers. Despite being stunned that Youngblood is active again, Diehard is determined to display that he is fully in control of the situation and closes in on the Shaft. The archer lands another solid shot causing enough damage for Diehard to remove his damaged mask. Enraged that Shaft has taken away his dignity in front of the public and members of the press, he decides to return the favor by removing the only thing more essential to an archer than his bow and rips his arm off. 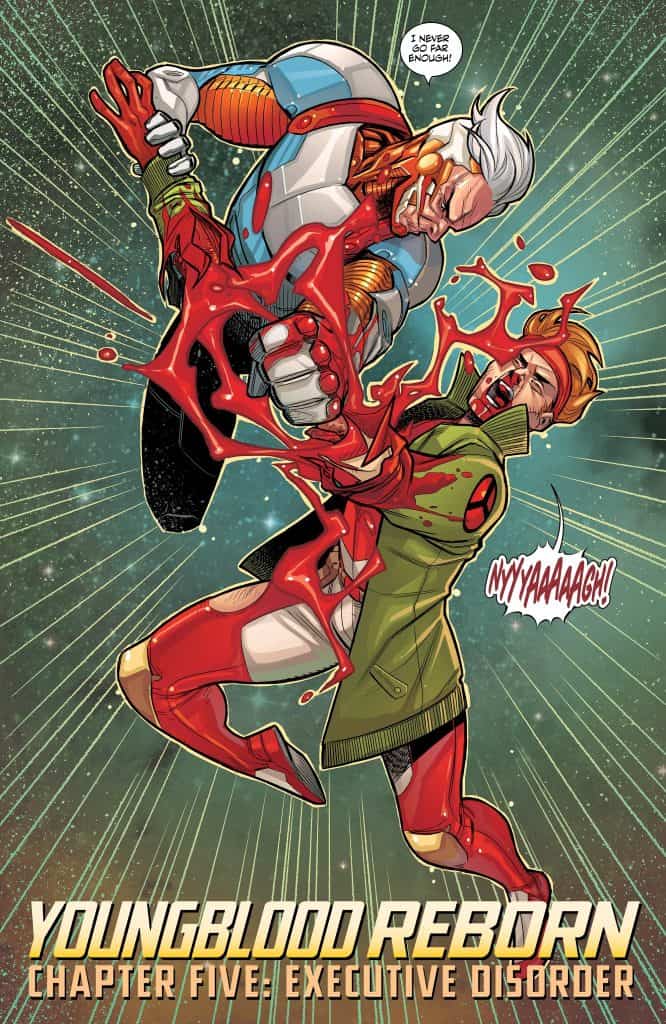 What Just Happened?
Everything! Youngblood has all the right qualities of a great team comic book. Chad Bowers has really done a superb job and delivers an action-packed story. Frankly I am stunned that Youngblood is turning out to be this good. (I could only be more excited if there was a clever way of introducing Psilence, Psi-Fire, Knightsabre, or even Exit into the series!)

Chad Bowers and Jim Towe are clearly dedicated to the 2017 relaunch and are delivering exceptional work to ensure the latest run has staying power. Bowers charts a course through the series that achieves success on multiple levels. Each character is given reinvented identities, unique personalities, and individual purpose for returning to action. Bowers reveals new characters donning mantles of previous members, a nod of respect to many key figures dating back to the earliest origins of YB’s history. One might think that working with Liefeld’s most heavily featured characters by including Shaft, Badrock, and Diehard, could deter any new writer from going too far in the revision of old concepts. Bowers shows no signs of inhibition and renews each by charting new roles and interpretations melding both new and old together seamlessly.

Jim Towe has been touted as an industry newcomer but could easily fool the most established reader with his already impressive skill set and among fellow artists easily earns rookie of the year status. Towe displays the same qualities of his predecessor by conveying real action through each illustration that shines brilliantly in combat scenes and perfectly captures the more dialog driven moments with a true sense of authenticity. Youngblood’s 2017 series is genuinely appealing and should be considered by even those who have been less enthusiastic, lukewarm, or downright critical about previous iterations. Liefeld has made a wise choice by allowing his most original creations to be helmed by such a dynamic pairing that together rivals many offerings by even bigger publishers. 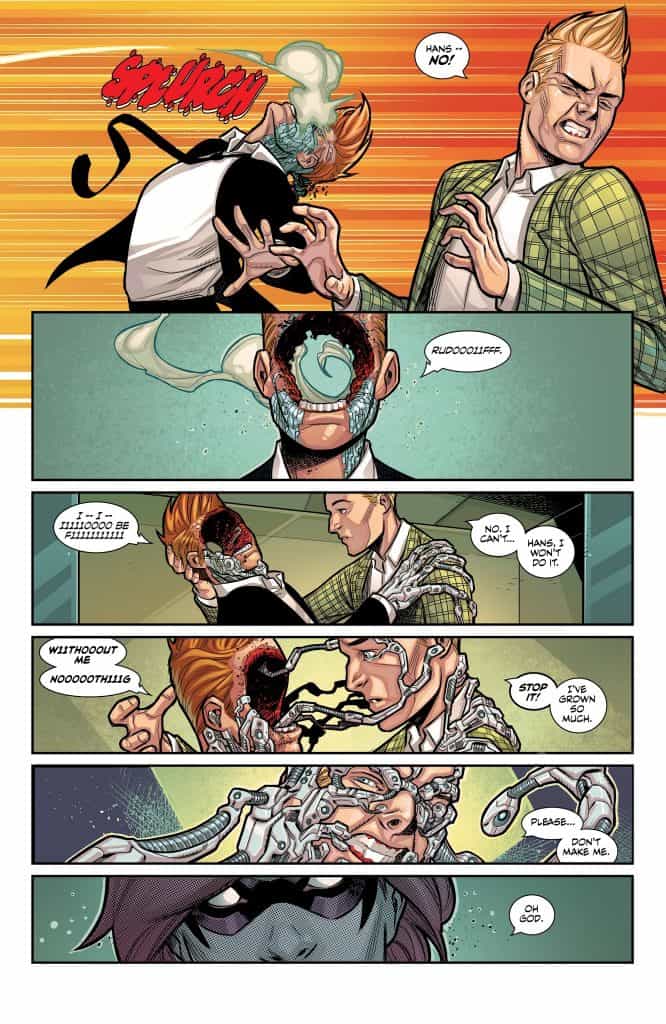 Final Thought: Youngblood is a true representation of the comic book action genre having evolved with a tone of maturity and style. Much as it did upon inception in 1992, Youngblood celebrates independent survival outside of the big two publishers especially for those whose enthusiasm has diminished by their ritual habit of over promising and under delivering by regaining significance as symbol of innovation and excitement.