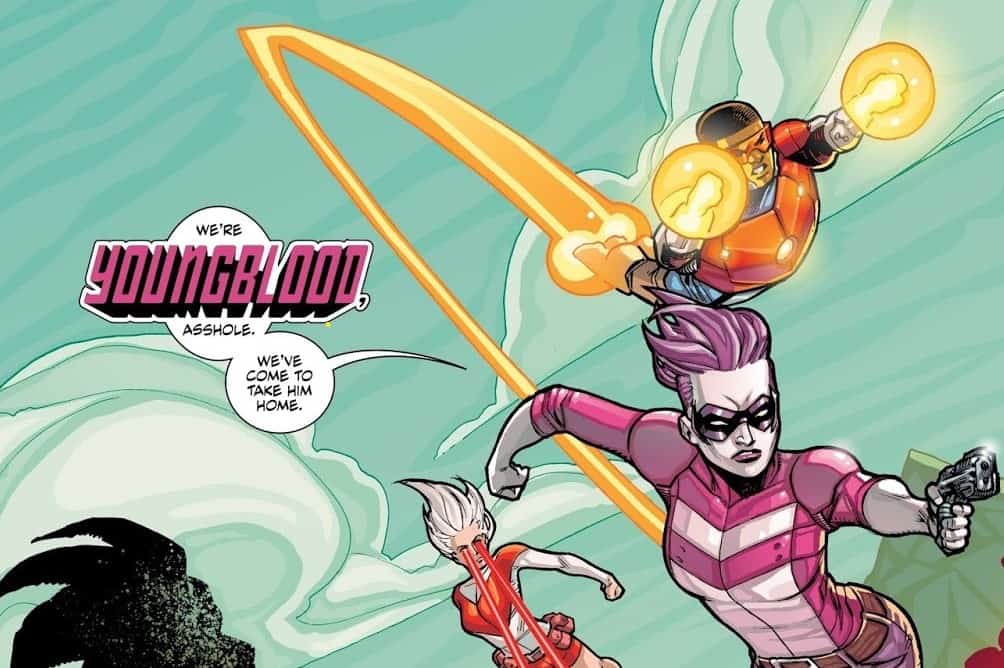 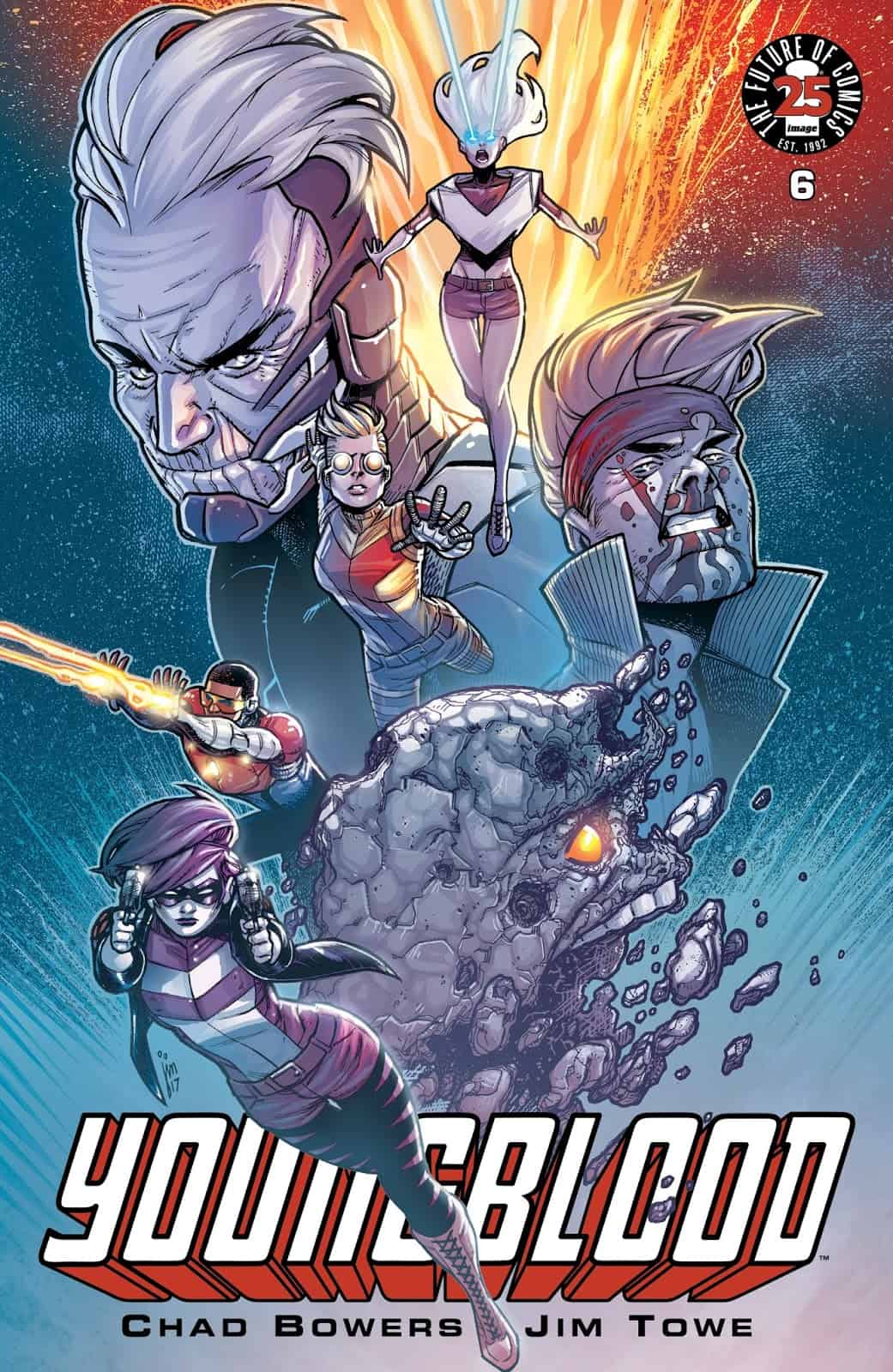 The 6 issue Reborn arc comes to a close but sets up dramatic cliffhangers, new story lines, and for the Youngblood creative team, continued success.

When Youngblood moves against Brynetec, twins Hans and Rudolf merged together to become a mechanical behemoth. Diehard confronts his former teammates Badrock and Shaft, splitting them from the others. After a heated exchange with accusations of betrayal, Diehard gives Shaft a whole new perspective to the term “comrades in arms,” as he removes one of his.

Youngblood is in serious trouble. The Bryne twins have fused and the high-tech abomination has torn through the junior members, leaving many of them with serious injury. Having lost all ability to perceive human thought, the machine entirely disregards the concept of affiliations, and assimilates one of the Chapel’s into its matrix. 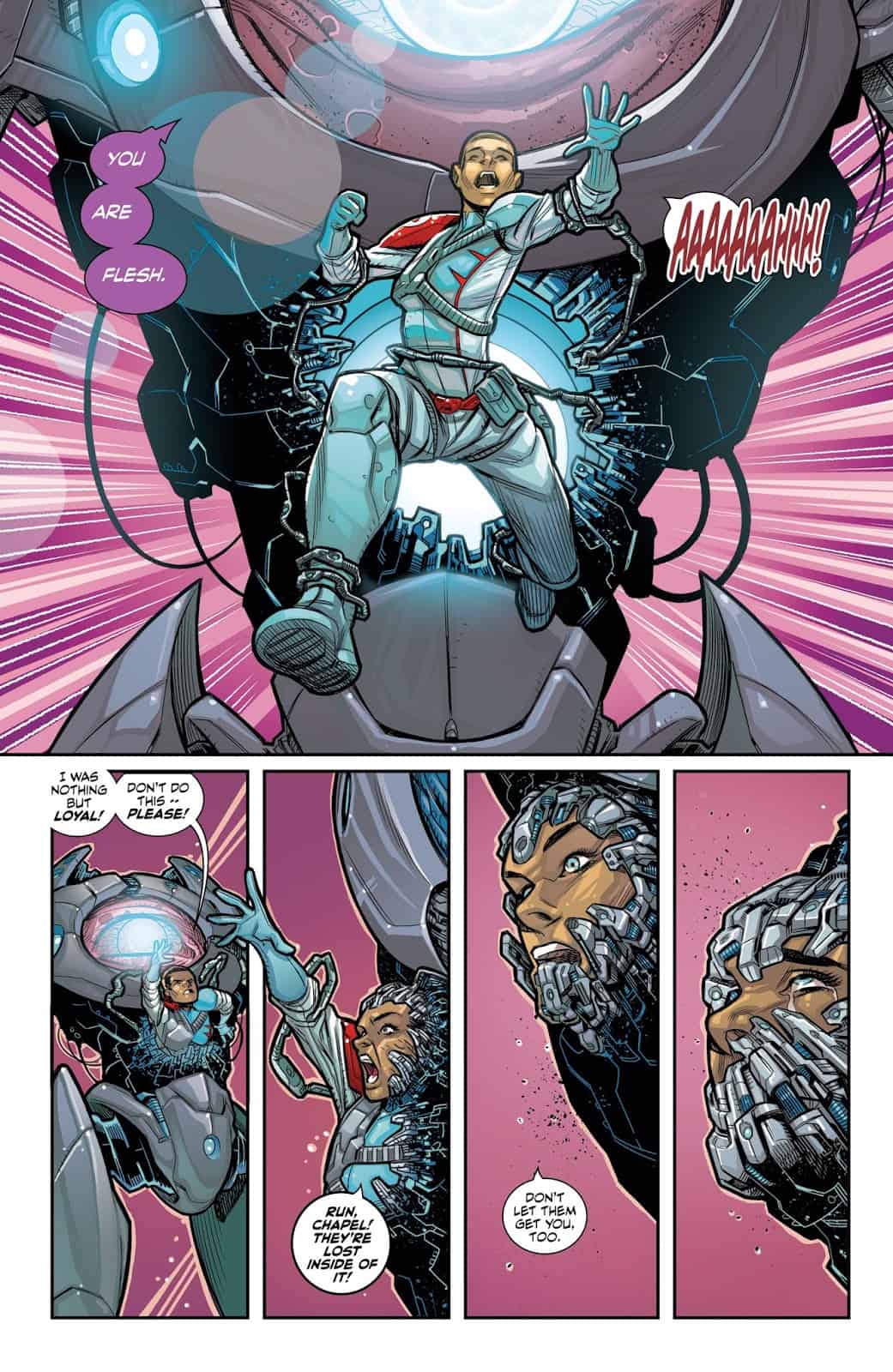 As Youngblood rallies for a last-ditch assault, Shaft reels from his own conflict with Diehard. The archer cradles what is left of his arm as Diehard berates him, but his arrest is stopped short as Badrock recovers and surprises the President and the two trade blows, arousing the interest of the soulless Brynes. Having defeated Vogue, Sentinel, and Doc Rocket, the machine focuses on Diehard and attempts to incorporate him but again Badrock intervenes. In the last moments of his absorption, his mind links with the Brynes, giving him the knowledge to defeat him. Suprema, the last member of Youngblood standing, returns and begins her own offensive slowing the super robot down long enough for Badrock’s illness to corrupt it’s system and overload, resulting in a mass explosion.

Diehard emerges with Badrock who upon the appearance of death has lost his immense size and stone skin. The President faces a media onslaught and while distracted, the boy who was Badrock seems to have survived, but at what cost? 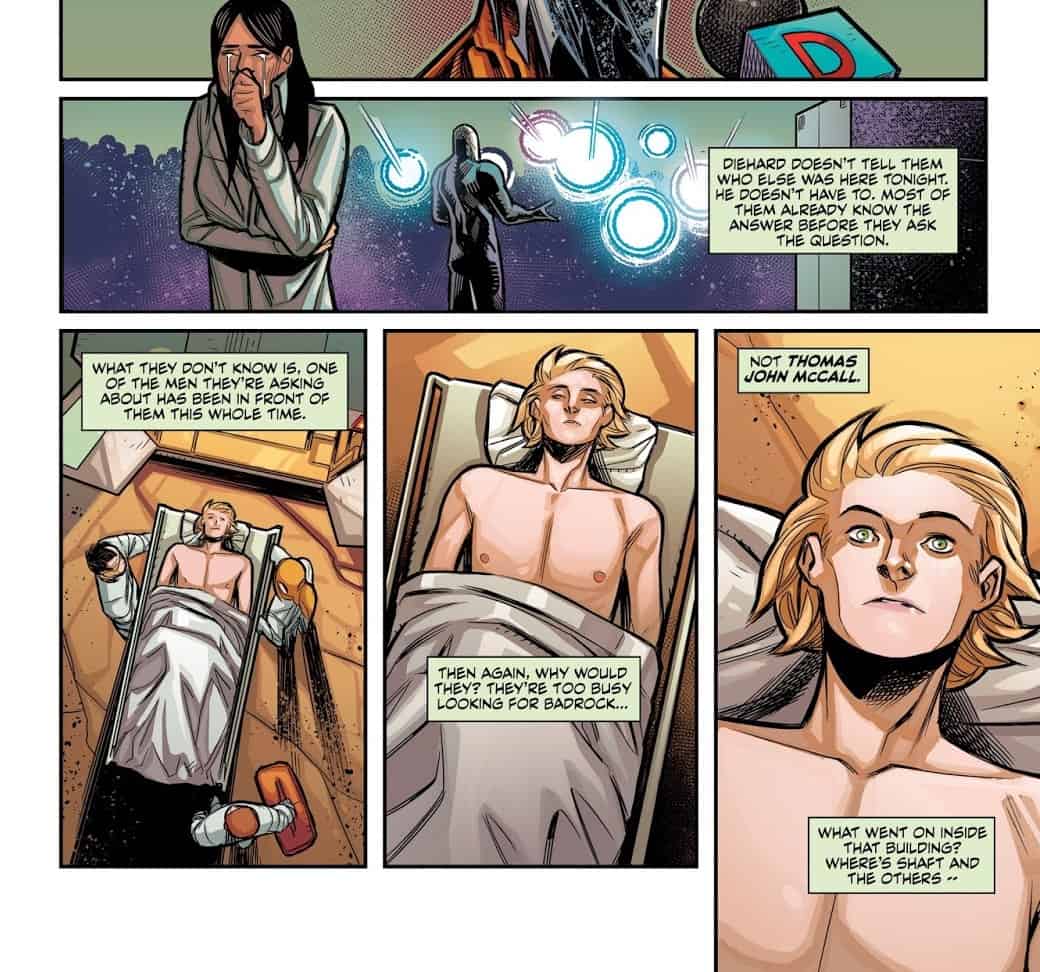 Big risks and big payoffs. That is the formula for the creative team behind the latest Youngblood incarnation. Reborn began as a strong story, and ended as an epic saga. No one saw this coming, and the crew behind Youngblood is all the better for it.

Jim Towe delivers stronger illustration with each issue and exhibits continual improvement. I have continually vocalized that Towe as a newcomer is as skilled as the majority of his peers with a unique ability to capture rapid dramatic sequence in a style reminiscent of the splash pages of the 90’s while bringing a modern touch with the aid of Juan Manuel Rodriquez. 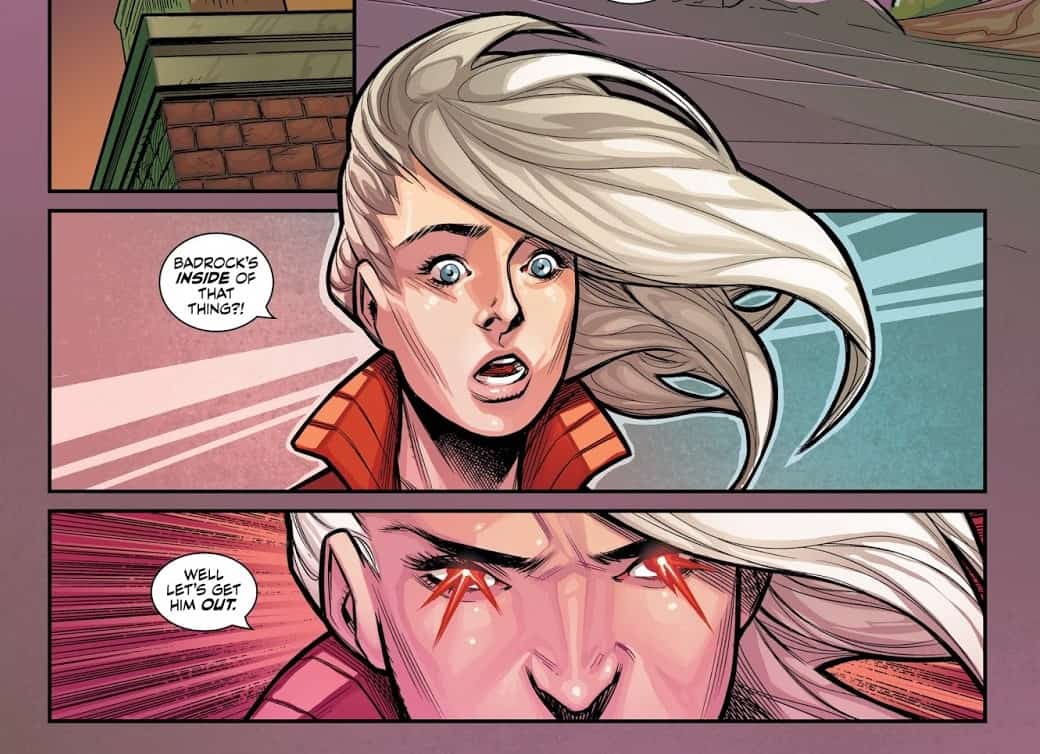 The story is jam-packed with action, suspense, but more importantly, Chad Bowers is playing for keeps. Bowers debuts clever new adaptations to older characters like Vogue, Chapel, and Sentinel, and launches into a creative story by blending in older main characters. Though Bowers offers an impressive resume, I had not been exposed to his work before, but I’m quite glad that Youngblood was the vehicle for that experience. He is unabashedly fearless as he makes fundamental changes to two of Liefeld’s original creations, first by severing the arm of Shaft in the previous issue, and in this issue potentially killing Badrock and reviving him with what seems like lasting consequences. Badrock’s story could go literally anywhere now, and the potential to evolve the character beyond the typical one dimensional “Hulk” or team muscle guy archetype. Shaft has pretty much been one of Liefeld’s chief characters and his poster child for the better part of two decades. I hope very much that Bowers utilizes the opportunity of an archer losing an arm as a means to create serious exploration and some real in-depth development for both YB staples. Issue #6 ends impeccably by setting up an epilogue event in which the rookie members of Youngblood are already on the move opening another chapter as this one closes.

Rob Liefeld should be deeply proud of his team. They have accomplished incredible feats at breakneck speed making other relaunches look like a snail’s race. I can only hope that he employs comparable creative teams to helm some of his other titles for similar renewals. Yes, Rob if you’re reading this out there, I would be – Extremely – (see what I did there?) excited to see a relaunch for Bloodpool or Newmen!

Final Thought: Chad Bowers and Jim Towe deliver. In an industry of Rebirth’s and Legacies, Reborn goes beyond industry rivals. Bowers transforms the former concept of Youngblood and changes key elements to core characters in a series of 6 issues that would have took Marvel or DC 6 months to reach.