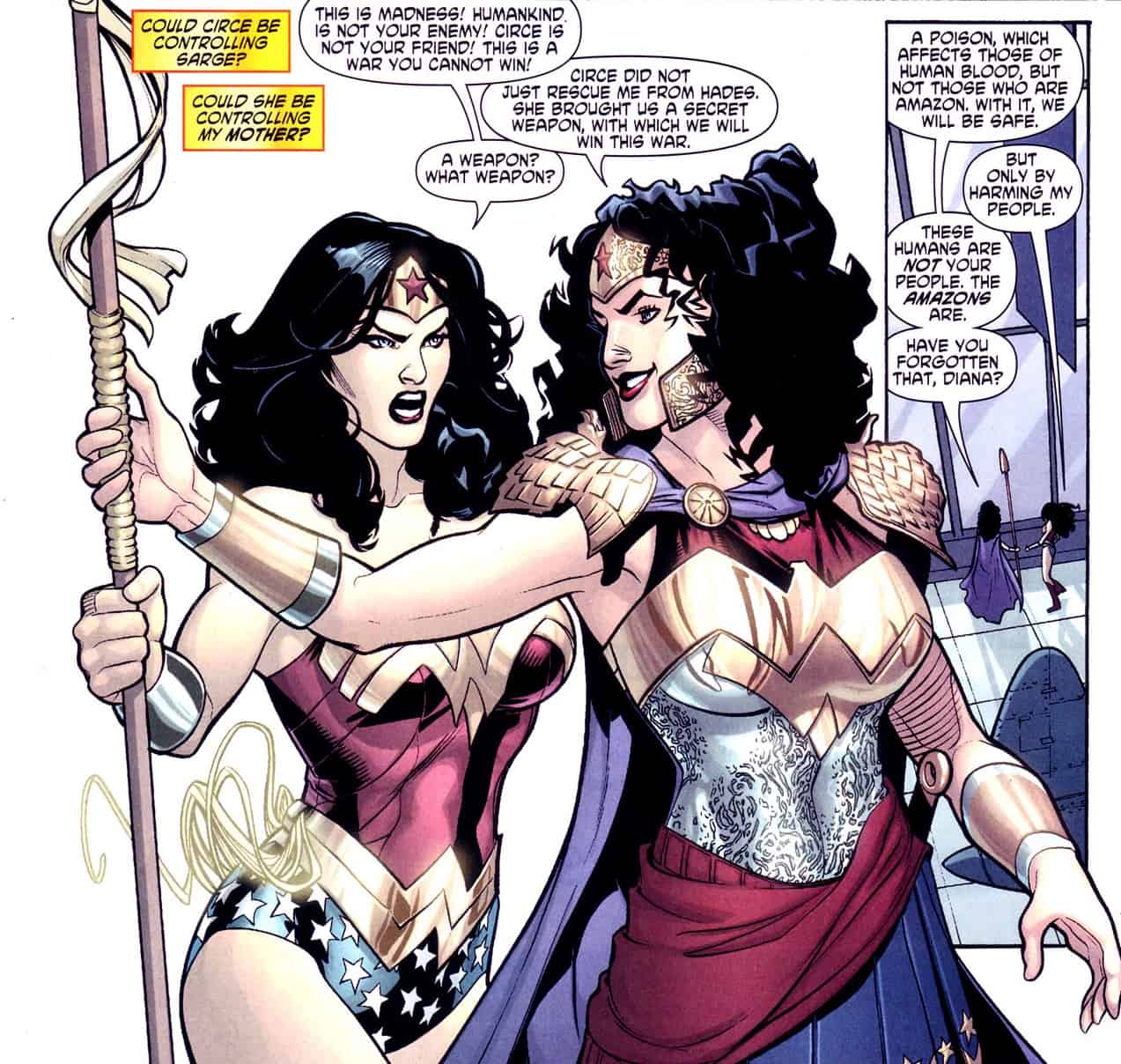 I cannot think of a harder tonal shift between issues of a comic than Jodi Picoult’s final issue and that of the writer who replaced her. It is bizarre.

Dorothy Woolfolk was replaced on Wonder Woman by someone who had a proxy of her assassinated.

This is a harder shift.

Jodi Picoult, author of novels like Harvesting the Heart, My Sister’s Keeper and the novel/comic hybrid, The Tenth Circle (with Dustin Weaver and Zoë Sadokierski) was an unusual but sensible pick for a Wonder Woman writer. Intelligent, talented, with name-recognition and passion in her projects.

It has been called, “Not with the money I spent,” “A blatantly obvious publicity stunt,” “Basically just a romance”,” and “Just Jodi Picoult being Jodi Picoult.”

It has also been referred to as many readers’ introduction to superhero comics, their first Wonder Woman comic, a comic that introduced them to a medium and character of whom they are now fans, and, “A real gem.”

In Love and Murder, Wonder Woman has taken a job with the United States government, in an attempt to gain a more grounded perspective than princess, and one closer to a place she often lives and operates in, the States. In this role, she has to do things from making change to pumping gas, and they are new to her. Some people took umbrage with the idea that Wonder Woman – the Wonder Woman! Superhero! – would not know how to pump gas into a car, but when would she have had this experience? How often do we think a princess with a magic plane, who can fly, and who has teleportation access, would use a standard motor vehicle in the United States, and of those, how many does she go into the gas station, put a card or cash down, go back out to the island and fill the tank?

The art teams shift every issue for five issues, which is not optimal, but a house style is observed enough to give the story clarity and unification. We start with Drew Johnson and Dave Snyder, with Terry and Rachel Dodson coming in two do two issues, and then Paco Diaz drawing the final issue, with him continuing on the ongoing title after Picoult’s departure.

Diaz participation in both this arc and the next makes the tonal shift even more intriguing to me, because there is visual continuity, it is solidly on the writing, the plot and characterization, where the schism occurs.

So, Diana Prince, Special Agent with the US Department of Metahuman Affairs, pumping gas, getting her own coffee, clocking in on hours someone else sets, and fixing her clothes in public restrooms. She is paired with the spy-hero, Tom “Nemesis” Tresser, a cocksure old hand, bemused by his partner as he is enamored with Wonder Woman. 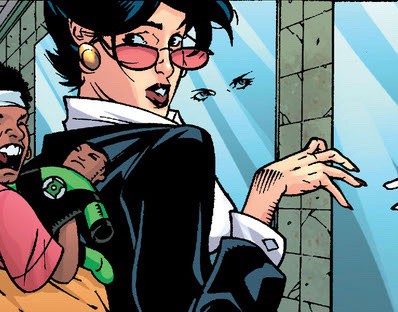 Unlike some prose-to-comics writers, Picoult plays with visuals immediately, a detached set of eyes in a mirror on her first page cuing up later reveals without standing out in the first read. Restroom door signs, t-shirt slogans, marquees and set design communicate a world’s worth of information, flavoring and affecting the plot and dialogue and how we receive them. Picoult understands the page-as-stanza concept, setting up some of her interlude gags, like Wonder Woman buying coffee, as a single page, presenting reveals such as drawn guns or arriving characters as page-openers.

Nothing in Love and Murder is overwritten or duospecific. There are no Claremontian captions to explain visuals and some occurrences are presented as anomalous until their causes are revealed naturalistically in the course of story. There are tried and true comics talent who have done worse, including trope-namer Chris Claremont or the infamous Avengers arc, The Crossing, which revealed its murder mystery’s murderer before the mystery or investigation got underway.

The gag I appreciate the most in The Tenth Circle, which alternates between prose and pages from the father/husband’s comic book, is that the artwork contains words and clues hidden in the line art. It is a technique some comics fans find blasé or overcooked, but I think it is fun and, in any case, completely valid. And, The Tenth Circle commits to it, keeping it central to the mystery of the plot, but also to fleshing out the author of the comic and how he communicates both with the world at large and his family; and how he does not communicate.

Love and Murder, rather than being prose-y or art-second, is a significantly visual comic.

The only visual which really strikes me as off, is that the memorial plaque for Wonder Woman’s mother – who returns to life in this story – is written in English on an island for which English probably is not even a tertiary language.

Even Diana Prince’s boss putting out his cigars on his prosthetic metal hand speaks measures that do not require additional words.

Picoult is able to balance a persisting male gaze with a distancing effect and introducing homoerotic female gaze with characters like the Catwoman who may just be a random woman dressed as Catwoman to go out to a theme bar treating Circe and Wonder Woman’s fight between toilet stalls as an illicit encounter.

Love and Murder ends without denouement, in the height of crisis. Intended or not, the lack of resolve gives the comic a definitiveness that more traditionally wrapped up stories can lack. The questions, themselves, the crises, the intense emotions and politics and familiar potencies become paramount and whether or not narrative peccadilloes or villain schemes can be sorted by last moment violence or wit pales in comparison. Who can beat up who evaporates as a concern compared to the locked horns, love, and duty of daughter and mother.

As the direct conflict moves from Circe and Diana to Diana and her newly resurrected mother, Queen Hippolyta, Diana’s immediate concerns also move from her place in the world, in her adoptive country, in the realm of superheroes and celebrity, and a place she will always occupy and never leave, of the homeland of youth, the immediacy of culture, and her place as the daughter of Hippolyta. 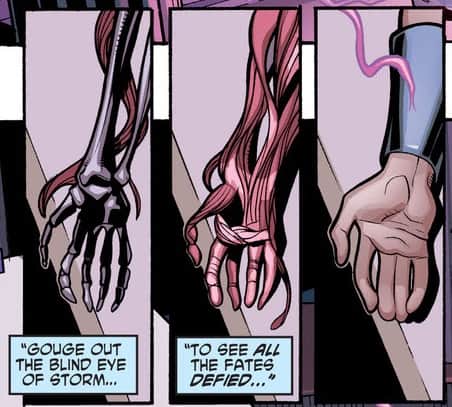 The first words of Love and Murder are Diana’s to herself. “I am not Wonder Woman. I have to keep reminding myself of that,” she thinks, reifying for herself a fake identity as a civil servant.

As she says pages later, “For me, being human is the disguise,” stuck in a subway station turnstile.

Interestingly, much of the snide and off the cuff critique human men give to Diana will be echoed in the criticisms of Jodi Picoult. She is out of her depth. She does not belong to this world. She needs to explain herself. To humble and prostrate herself. What does she know of inflation, violated construction codes, and the insecurities of workaday men who frequent local theme bars? How. Dare. She.

At the risk of positioning feminineness as a distant nation, Diana will always be of Themyscira. Circe and she and Hippolyta all belong to that other world that is not a geographically or lingually distanced, but distanced by a lack of embrace for patriarchal domineering as a social norm.

“If you think I’m a bitch now,” says Circe, “you should have sene me a few thousand years ago… [Men] are afraid of us. We’re outsiders – we’re powerful women – and what we fight for is hidden beneath the blood on our hands.”

She and Diana both say they fight for what they love. And, that love is beneath the blood on their hands, because it is in and within those hands.

It is foreigner, and outsider, and alternate paths which are on trial, which are being judged by these men, and the world so overtaken by patriarchy that these men are called, “human,” but in the bones, flesh, languages and practice of Circe and of Diana there is another way.

Tom Tresser, Diana’s partner and in this story her closest ally, will not stop himself from playing cartoon pervert or comedy boor. On some level he feels he has to be the obnoxious man because there has to be an obnoxious man in the equation or men are erased or belittled. Patriarchy and sexism are not only cartoons or supervillains, and patriarchy and sexism creeps in culturally, systemically, endemically.

In the story which follows this one, by another writer, Superman will separate Diana and her mother, lecture Diana, redirect her priorities, and the title of that comic is, Hubris. What hubris that!

In Love and Murder, Superman is background. Famous and beloved, but his biggest role is to catch the Washington Monument when Hippolyta leads troops to the United States to free her imprisoned daughter. Batman as a man on a screen; an emblem on t-shirts. This is Wonder Woman’s comic and it is Wonder Woman’s story. 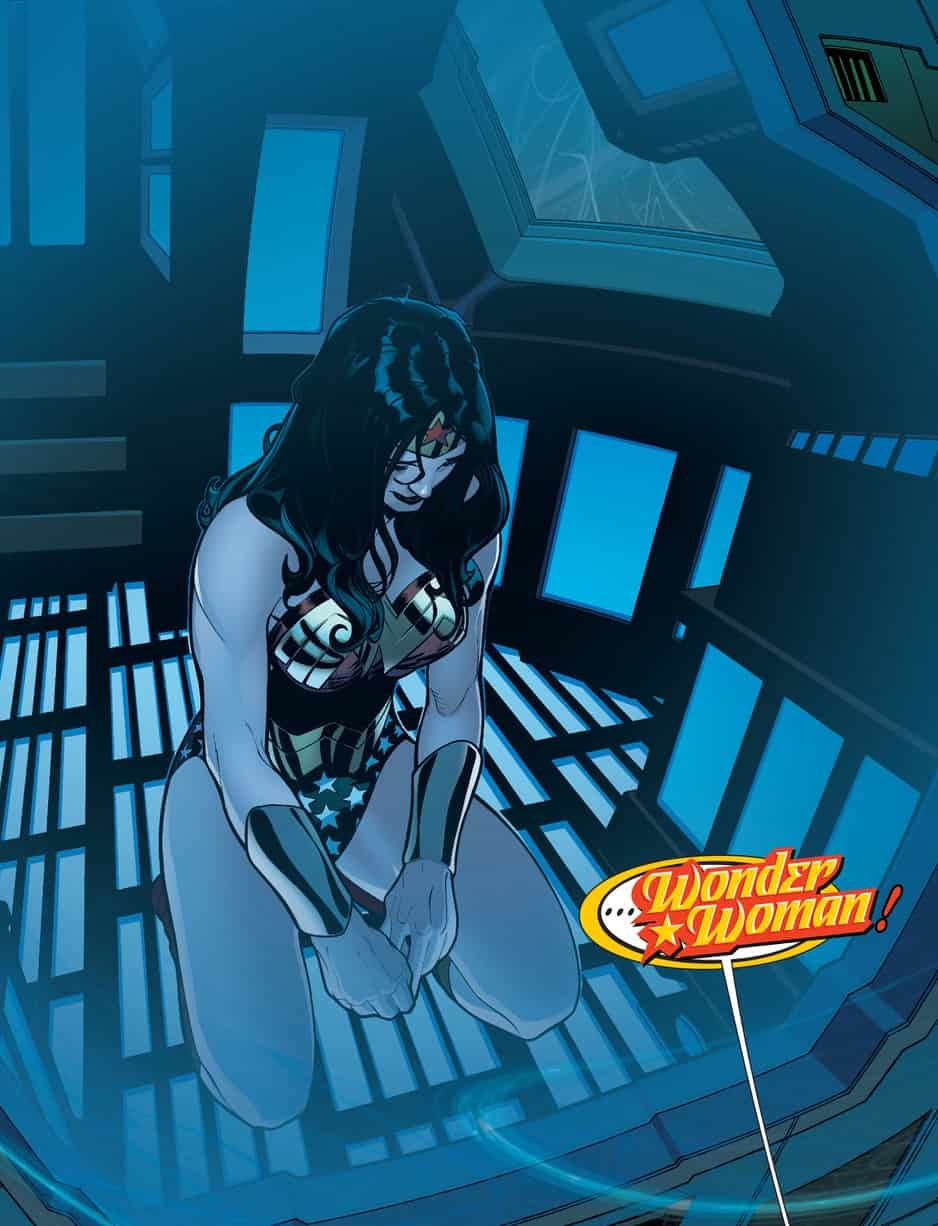 Hippolyta tells her daughter, “Do not defend their crimes!” and her daughter asks her to stop invading because she has escaped imprisonment. She was still imprisoned. Diana argues that the United States does not want advanced weaponry or technology, that they are not an invasive people, a conquering people.

Circe tells Diana she must kill her mother to win. Diana puts the blade to her own throat and asks her mother if she would kill her to win. Stalemates? 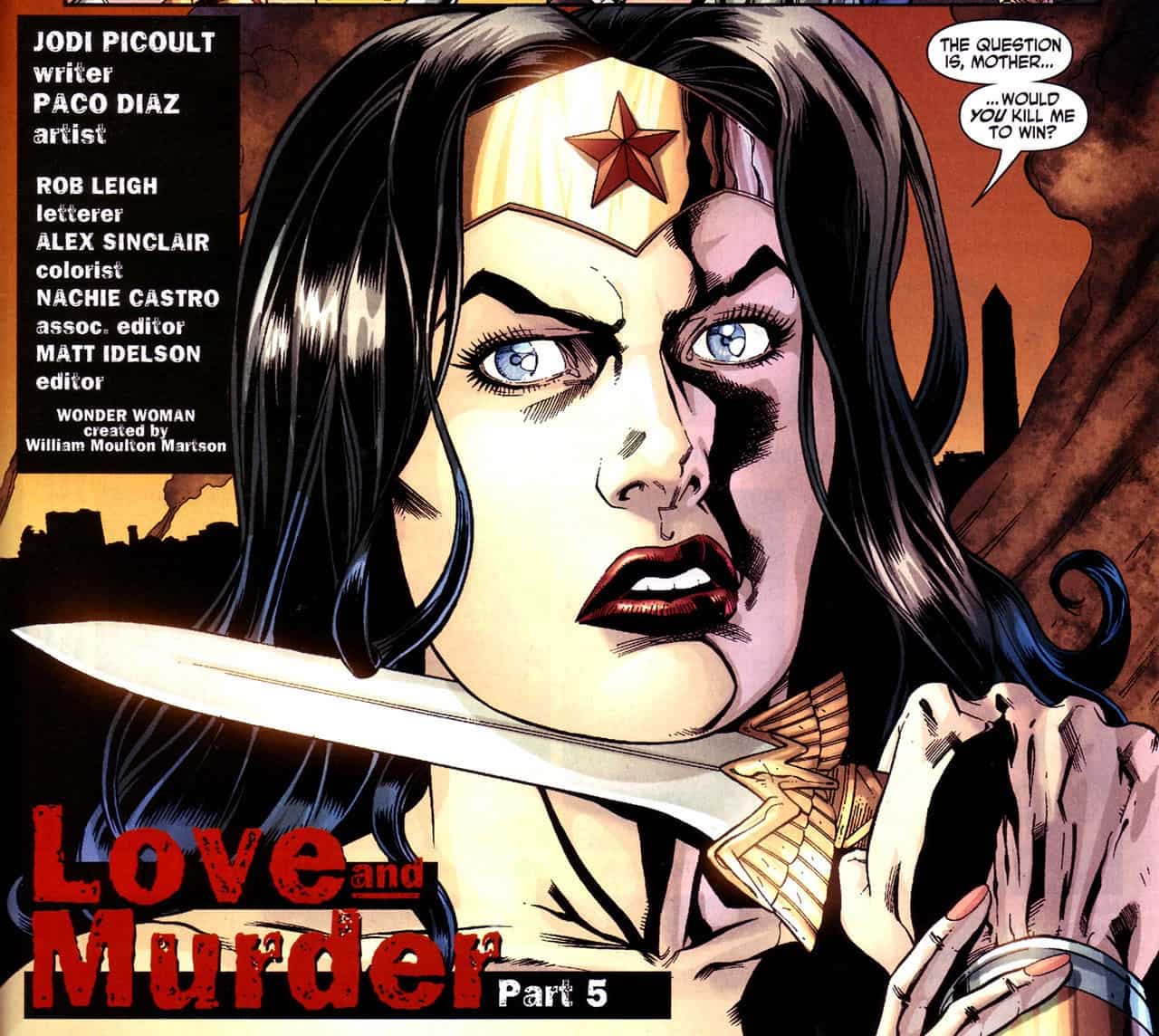 The “Arthur Miller fan” called Everyman is a murderer, sadist, misogynist (who Wonder Woman believes is a Frank Miller afficionado). The superhero called, Maxi-Man, is a prop, a tool, a swagger who can sit at a table and sign breasts and portfolio art. Tresser and his boss are just men. Batman. Superman. Men. This is a story of choices and women and that women have choices to make.