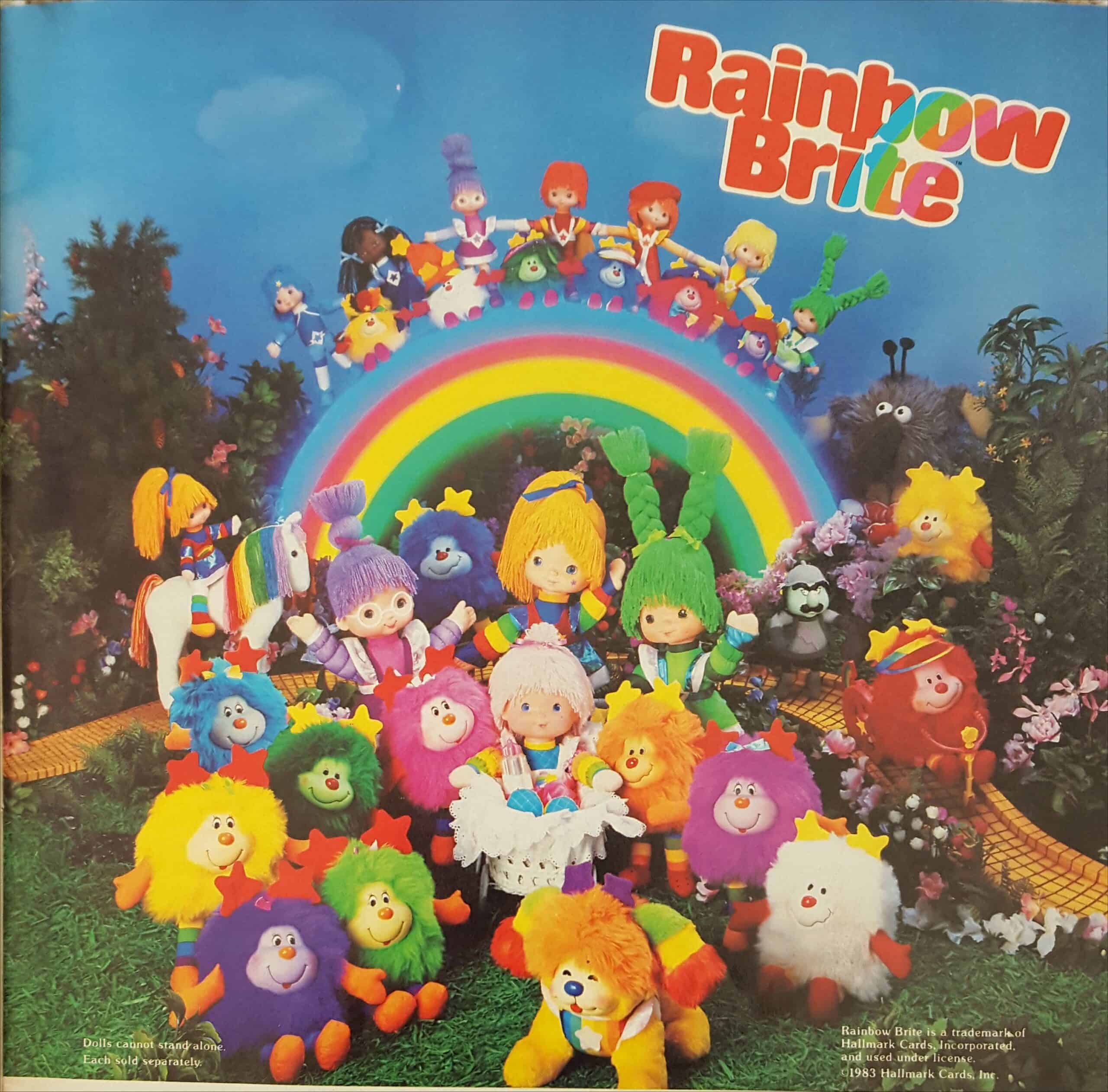 Rainbow Brite brings colors. Those in tandem bring colors of their own, in lesser scale and variety. Those in opposition bring blacks, grays, whites, or they take color away. Or, is it all in tandem on that bigger, broader scale. She does tolerate the Urizens, the Murkys and Dark Princesses, she does invite them in their role and place. Their role and pace.

The commercialization of liberation from slavery is?

Created by Cheryl Cozad, Mary Loberg, GG Santiago and others for Hallmark Cards in 1984, Rainbow Brite, her friends, her world are cheerful, reassuring, and deceptively queer. Every relaunch of the property has attempted to solidify gendering, downplay queer openness. Renaming Twink, “Mr Glitters,” which both removes the conflation with twink and genders a sprite for the first time, cannot wholly unqueer, but that is because the queer of Rainbow Brite is, “queer not as being about who you are having sex with, that can be a dimension of it, but queer as being about the self that is at odds with everything around it and has to invent and create and find a place to speak and to thrive and to live.” To steal from bell hooks at the Are You Still a Slave? Liberating the Black Female Body panel.

It is only in this framework that I can stand the young boy, Brian, who occasionally shows up in the 1980s cartoon and other Rainbow Brite narratives, a boy who disbelieves, who argues, who does not realize he is being invited in and gently mocked by Rainbow or her friends, who cannot even come as close to Rainbow Land as her enemies, active enemies who live there and bring their mothers home to visit there.

Rainbow Brite is, in many tellings, not from Rainbow Land. She, like that boy, comes from elsewhere. Rainbow’s name is Wisp, and Wisp is some kid. Like the club kids of late 1980s-early 1990s New York City, Wisp changes her name, gets style, becomes because she is invited in. And, she is invited in by the Color Kids, aka the Color Crew, androgynously-dressed in stepping out clothes as daywear, wearing creative and punning names, living a life where duty and party are synonymous and affect is purely committed to.

While the club kids collapse into murder and cruelty, torture and overindulgence, the Color Kids can and are recreated, repositioned as commercial tastes shift, as commercial execution declines and needs rebirth.

You could keep doing it.

The Color Kids are both functionaries of Rainbow and emanations, just as colors exist within a spectrum of light, even colors which are only in name or systemic existence, like indigo in the rainbow. Yet, Rainbow comes from outside Rainbow Land. Rainbow is, herself, an emanation of another field, another place. Divinity is tactile, travels, it is mortal and frangible. If those tasked with winter night skies and stars and summer rainbows can cry, worry, break and heal, we must have permission to.

Part of a wave of greeting card worlds, like The Get Along Gang and Strawberry Shortcake, Rainbow Brite is about marketing. Not necessarily sales. Identification. The accumulation and use of color crystals occupy the days of the sprites, and the Color Kids, but those crystals are almost instantly put to use and a use which enriches multiple worlds aesthetically, spiritually. Presence. Not so much commerce as use. Which, is an advertisement for commerce, because that is not what commerce is, just what it feels right it should be.

At the height of Rainbow Brite fame, kids exchanged stickers, they collected and displayed stickers, in what was its own micro-economy and a model of commerce beyond American capitalism. While some capitalists or believes in capitalist philosophy might enjoy the aesthetics of that arrangement, most do not. Collectibles a the schoolyard level have no set values. Valorization in those fields cannot be fixed outside of those engaged directly in the exchange, and that exchange can be purchase, trade, showing off, reception of aesthetic alone, social privilege, social bonding, Hierarchies of child, not hierarchies of purchasing power on any of those grander economies.

It is the agitation in Rainbow and in Rainbow Land which makes the comfort. Common enemy, Murky, is like a biker Cheech Marin living with his best friend, unable to enjoy color or his lifestyle because of childhood trauma, specifically getting yelled at because he loved colors so much he colored on the wall of his childhood home. 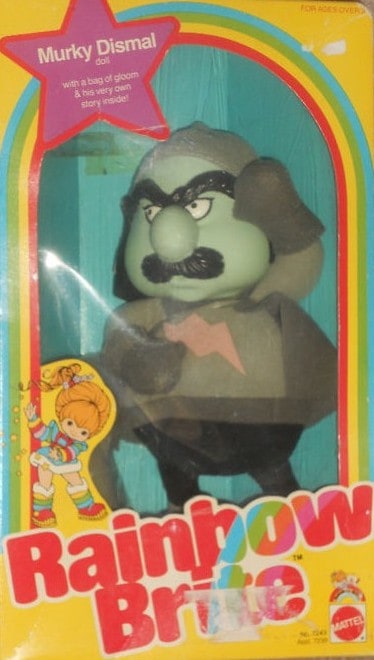 This look was very in.

Murky lives in guilt, turning it outward and inward cruelly, like a shell, a shield. It is wrong. It is unhealthy and unnecessary. He could just accept where he lives, how he lives, look a the colors, enjoy the life, admit what he enjoys and that there is no harm or wrongness in it.

An adult economy can define the purchase power and value of an item for the entire economy, but while a doll or sticker can be engineered for desirability, it can be marketed for desirability, there is amongst children an immediate fluctuation and flexibility in its value and exchange rates.

The 1972 Stanford marshmallow experiment involved offering children a treat now, or more treat later if they waited. It was thought to demonstrate that not thinking actively about a reward enhanced a person’s ability to delay gratification. The experiment and its results have been used for decades to support theories of class, race, gender, nationality. The experiment was flawed and proves little beyond the bias of the observers.

Cognitive and Attentional Mechanisms in Delay of Gratification, a study by Walter Mischel, Ebbe B Ebbesen, and Antonette M Zeiss remains the most commonly cited, though Mischel participated in several updated studies, with updated results and a continual refining of the understanding of the mechanisms of study and the varied elements which come from outside the test and affect the results and the subjects.

Now, the question to ask is: Is this true, or does it only feel right?

So, why does Rainbow only ever visit that world, our world, to invite people out of it?

In the 1987 cartoon episode, Star Sprinkled, a con artist convinces the sprites to sell him their color crystal mine and the legal system of Rainbow Land is simple enough that his deal cannot be dissolved in the face of obvious fraud. It is too late. He bought. They sold. Not by money but trade, but a trade that is inarguably monetized and represents a capitalist, populist myth, that money follows money and money produces money and money trickles down.

Plock is only a con artist. A liar. A thief. But, he is a personable thief and Rainbow Land culture privileges personality over the criminality of deceit, cruelty, theft. Like Murky, who can assault the Color Kids, harass the sprites, attempt to conquer Rainbow’s home and town, who can still bring his mother to come visit and everyone will pretend to be his good friend, Plock is accepted by Rainbow Land as a thief, a liar, and a guy with personality.

Plock has a change of heart and returns the mine to its owners. Capitalism at its worst is defeated by pure emotion! Hooray! But, that is a narrative. It’s the story, the sell, but they cover up the bigger sell.

That is why Rainbow has to periodically come into our world and invite us out, because her own program, her own franchise and owners cannot and will not. Life is devotion that is joy and joyful devotion. Life is to be a color and the rainbow, emanation, presence, befriended.

The best we have from outside of Rainbow Land are attempts to make each other feel better and to keep an eye on optical illusions in case we see Rainbow Brite.

Like the pinks and rainbows of William Blake’s Milton, Rainbow’s message is a something desperate that does not always seem to know it is desperate. No Morpheus striving to seek out The One. No Moses smashing the tablets or failing to free slaves on his first outing. Rainbow smiles and invites in earnest. We do not know if anyone takes her up. 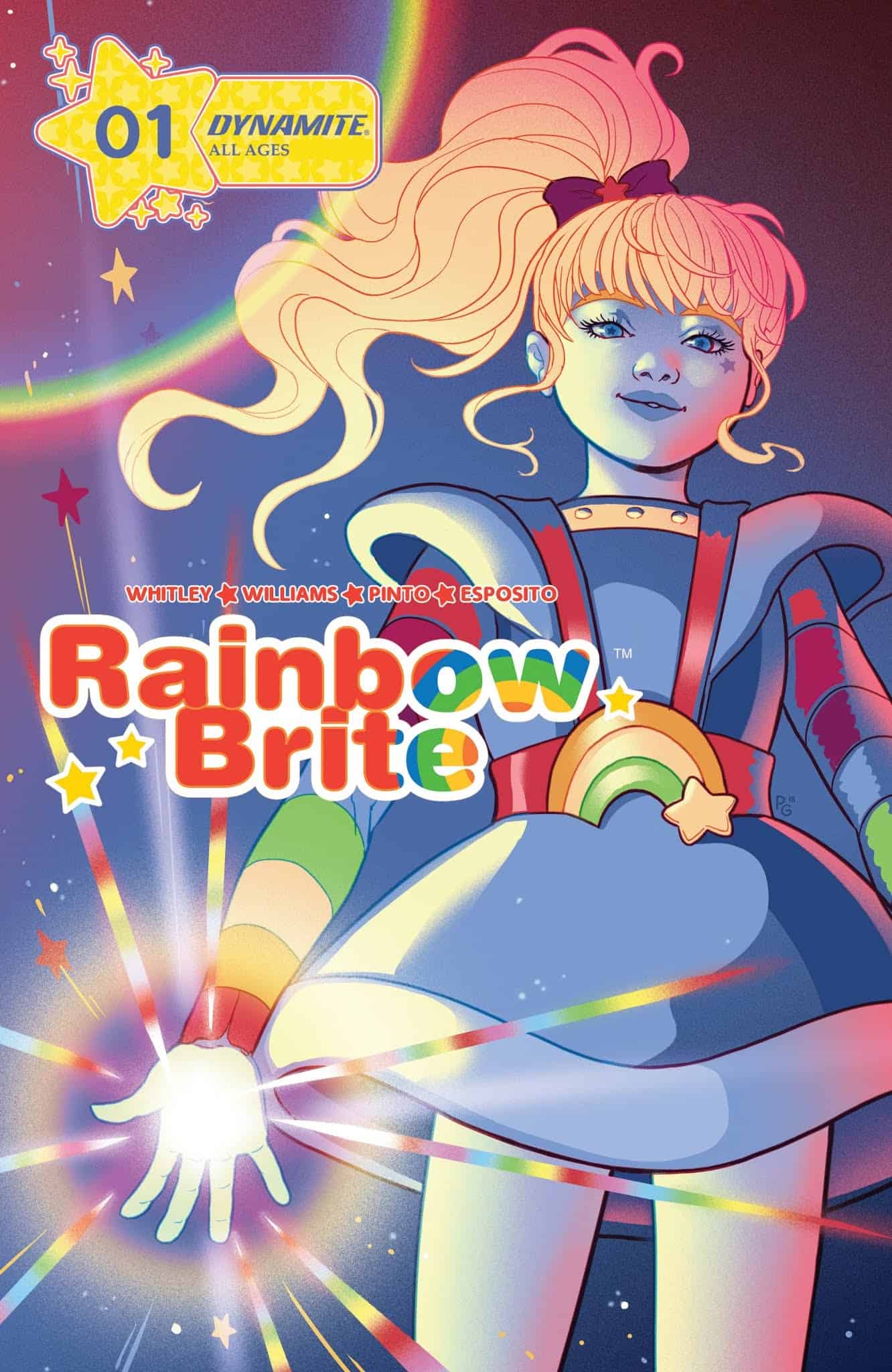 Always owned and made a commercial. Always free and outside of commerce.

SOLDIER STORIES: We Can Never Forget Their Stories
November 11, 2022

Dracula Ought to Be Weird: Lust for Dracula
October 31, 2022