Knights of X #4: Nobody Knows Where My Rosemary Grows… 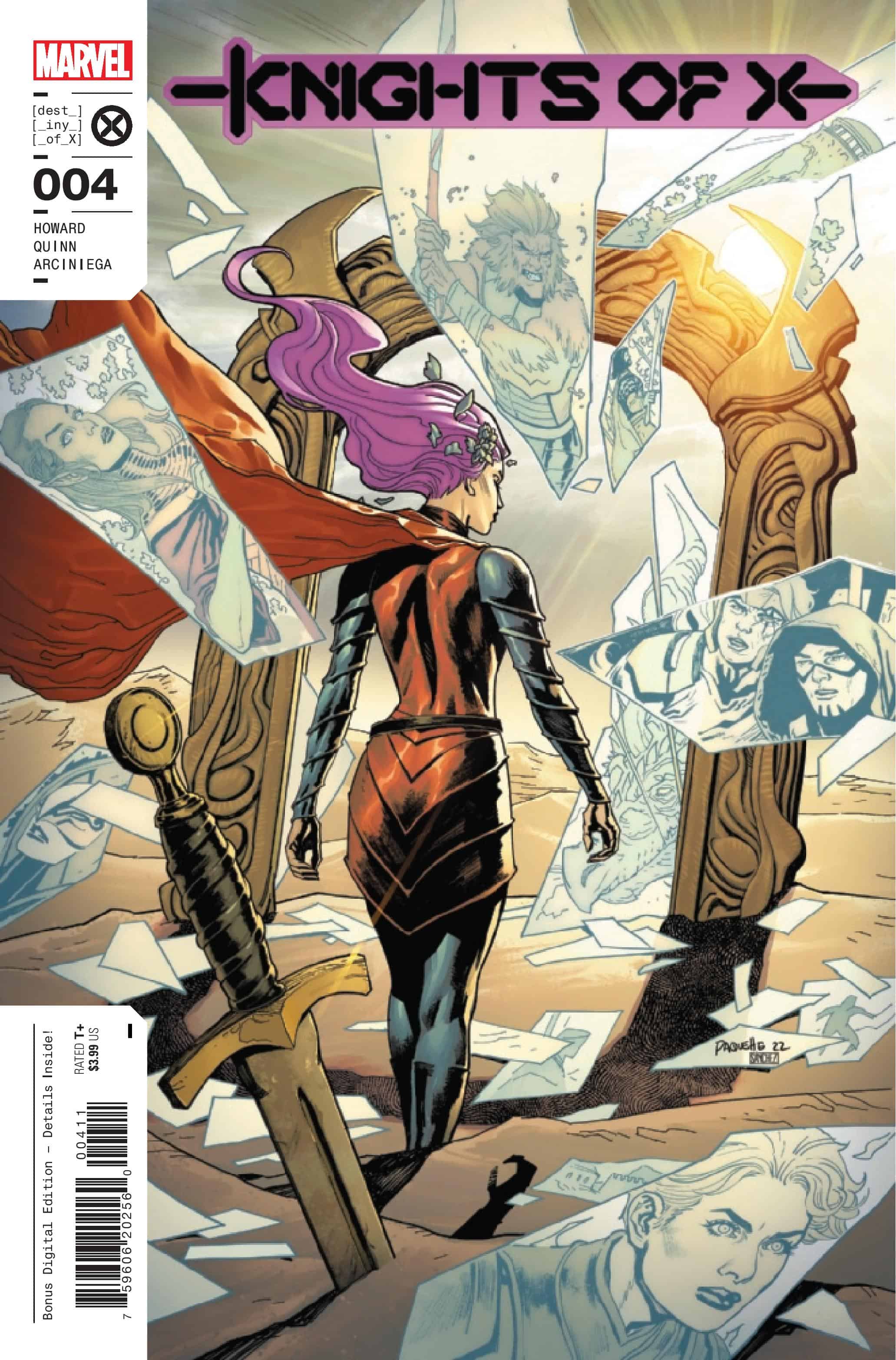 BRAVE THROUGH THE DARKNESS! With Arthur and his army on their heels, all but one of the Knights of X have made it to Mercator — the province void of light. But all isn’t what it seems. Will Betsy and her team be able to overcome the darkness and find the Siege Perilous?

SPOILER WARNING! Turn back now lest ye comic be spoiled!

The Knights are in that eleventh hour in their war against Merlyn, Arthur, and their forces, and allies, which include a kingdom of vampires, as well Furies, and the drama is reading a fever pitch, while we see the team not only deal with this attack on many fronts, but also dealt with Gambit’s death at the end of last issue. But that’s not what the world will be/has been talking about. It’s the kiss that’s been heard around the world. After forty-two years since her creation, Rachel Anne Summers-Grey is finally an out and proud member of the LGBTQ+, and I am completely here for it.

Rachel has been one of those characters who has been queer coded for almost the entirety of her years in comics, and finally get this confirmation is something that her fans are cheering about. This, along with Howard’s transformation of Rachel’s evolution from Prestige (such a horrible name), to that of Askani, another piece of X-lore Rachel has been associated with for thirty years, and I have to say this is honestly the biggest, most important development the character has had since her role as the legacy of the Phoenix from her mother back in 1985.

While I’m so very, very pleased with Rachel’s coming out story, I’m not sold on the relationship with Captain Britain. It’s not that I’m against Betsy being bisexual, that was already established with her relationship with the female Fantomex character from the second volume of Uncanny X-Force, but Howard hasn’t sold me on the relationship, even as I went over her run in Excalibur, and the pieces just aren’t there. For me. How Howard helps defines this relationship goes on with this next issue, plus wherever we go from here.

Now, I’ve seen the argument that there was enough evidence throughout, but I feel the blame for this disconnect lies on the shoulders of Howard. This, along with the…failed possible romance between Betsy and Pete Wisdom. It’s all done very hamfisted, and doesn’t feel organic to me. Now, I know Howard can write sexual tension and flirtation well, because she’s writing a fun little ditty between Catwoman and Valmont in her solo, as well as other stories I’ve read by her, so the total flubbing here has been the biggest disappointment. For me. Now, I can’t stress enough that this disappointment is mine, and that to the fans who are cheering this, I in no way want to discredit their feelings with what Howard’s doing, it’s just fallen flat on me.

Bob Quinn’s art continues to be the MVP with this story, as the Captains Britain, and the rest of the story in Otherworld, deal with this huge civil war that’s been brewing since the 2019 Excalibur series. His linework and technique here is both ephemeral and powerful, which is exactly what you’ll want in an artist that’s trying to deliver a magnum opus set in a world of magic, and a story that’s getting you into the trenches of an ongoing civil war. Mix that up with Erick Arciniega’s colors, and this is a team that’s out here putting in the work. 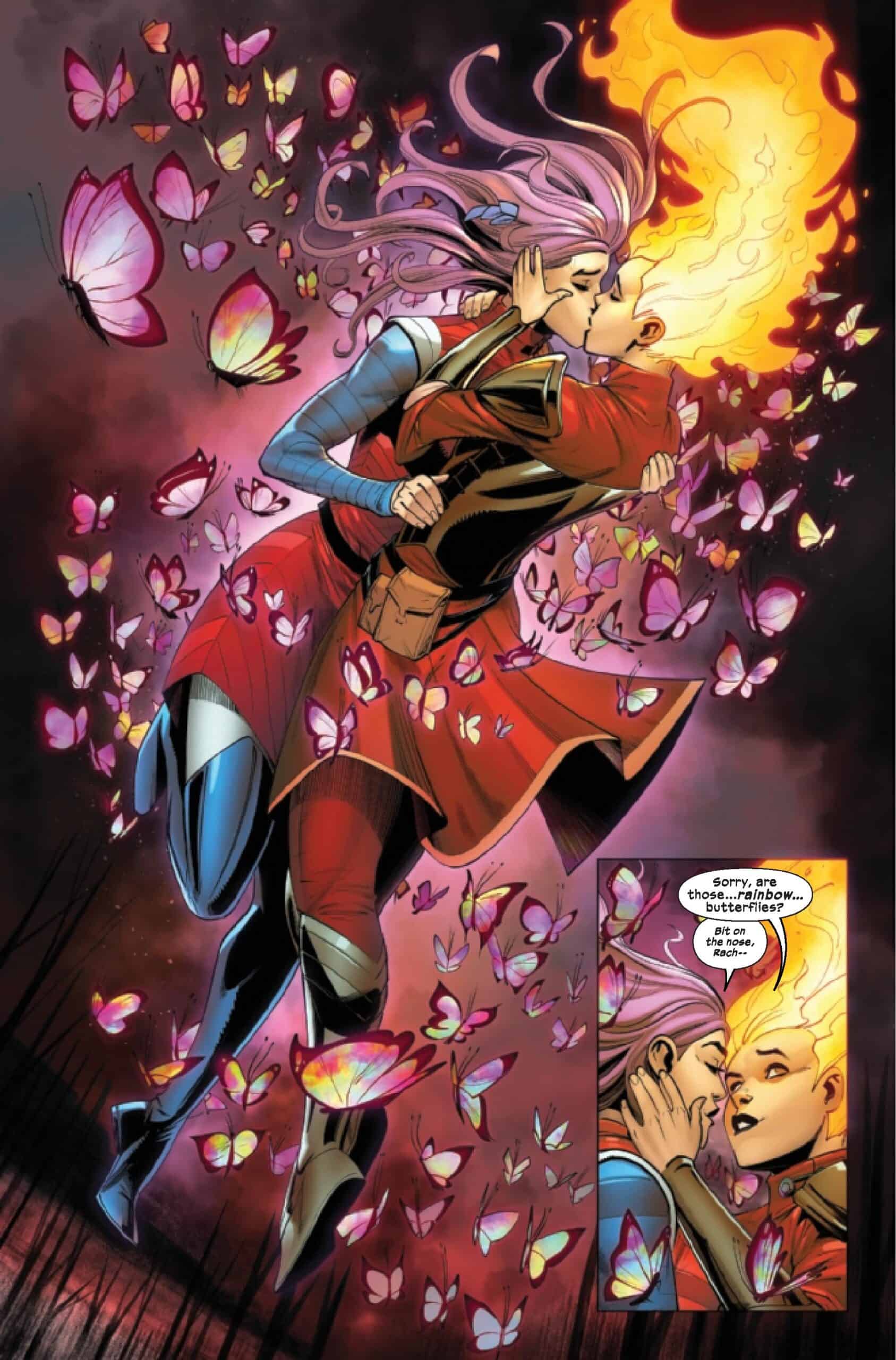 We’re entering the final lap in this four-year-long story, and while I have some issues with the story Tini’s telling, I’m not going to take the shine from Rachel’s coming out. To Rachel, and her queer fans, we finally got it!

Knights of X #4: Nobody Knows Where My Rosemary Grows…