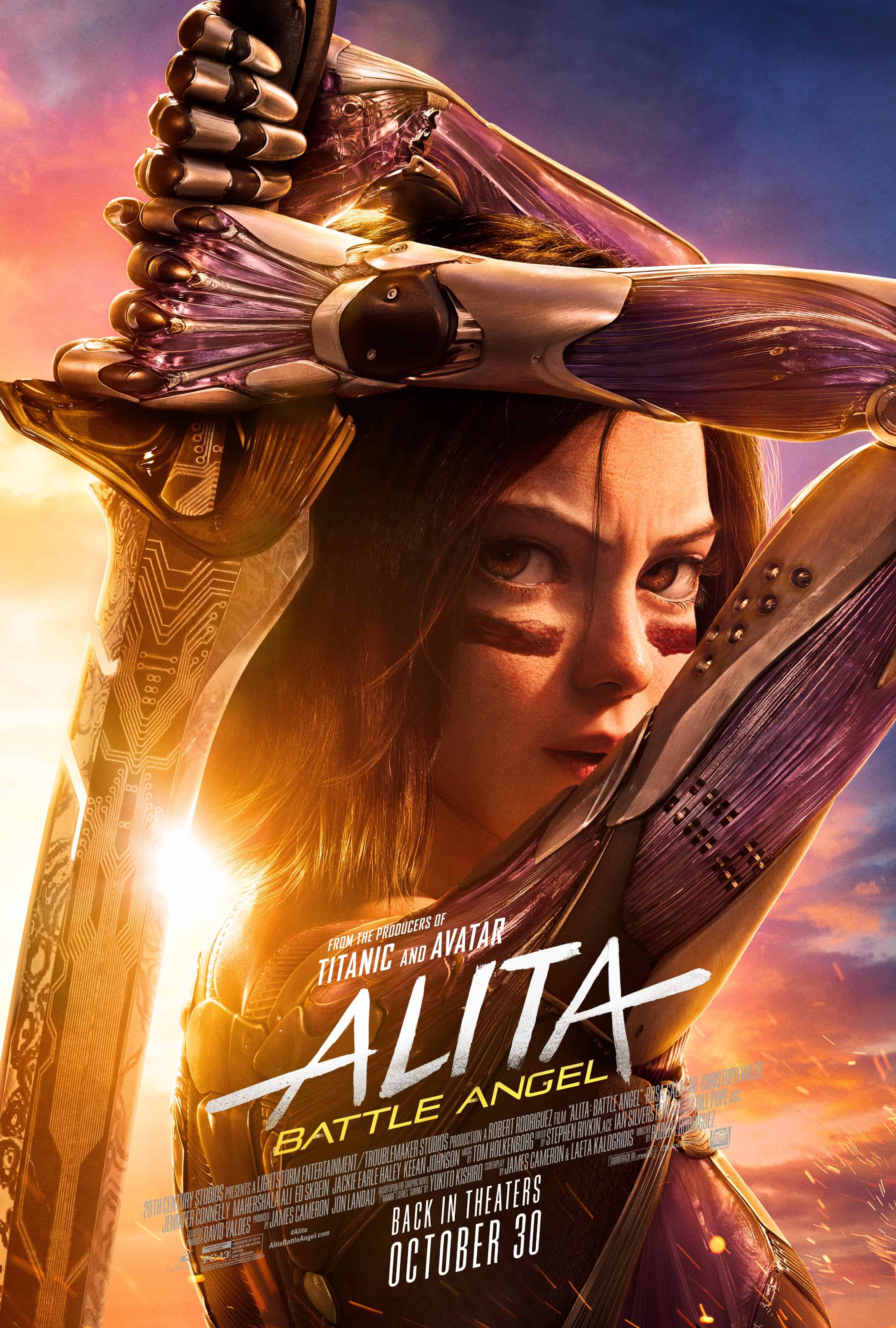 Over 500 years from now, in a dark, post-interplanetary-war, cyberpunk future, a cyberdoctor finds a deactivated cybercore in a massive scrap pile. Discovering she is still alive, Doc Ido rebuilds this amnesiac, total replacement cyborg (only a human brain remaining). He gives her the name Alita, and she sets out to discover more about herself, her past, and her way in the harsh streets of Iron City.

2019 was the last great year for movies in recent memory, before the pandemic that effectively shut down the movie industry and blockbusters in general. We had the Infinity War wrapping up, the likes of Aquaman finishing it’s post Christmas 2018 run, and the more mainstream titles of Parasite (live action from Korea), The Irishman, and Uncut Gems gracing cinema screens across the world. And yet there was another great movie in 2019. One that flew under the radar due to a combination of timing, downplay by critics, and poor advertising. This movie was ground-breaking in as many ways as 2009’s Avatar by James Cameron was, and of course, Cameron was a producer on this movie as well. Of those that did chance to see it, audience scores were in the top 10 percentile, and it generated an instant hardcore following (like all niche classics) known as the #AlitaArmy, who continue to campaign for a sequel to this day. I refer, of course, to the Robert Rodriquez directed, dark cyberpunk action thrill ride that is Alita: Battle Angel, starring Rosa Salazar as Alita. 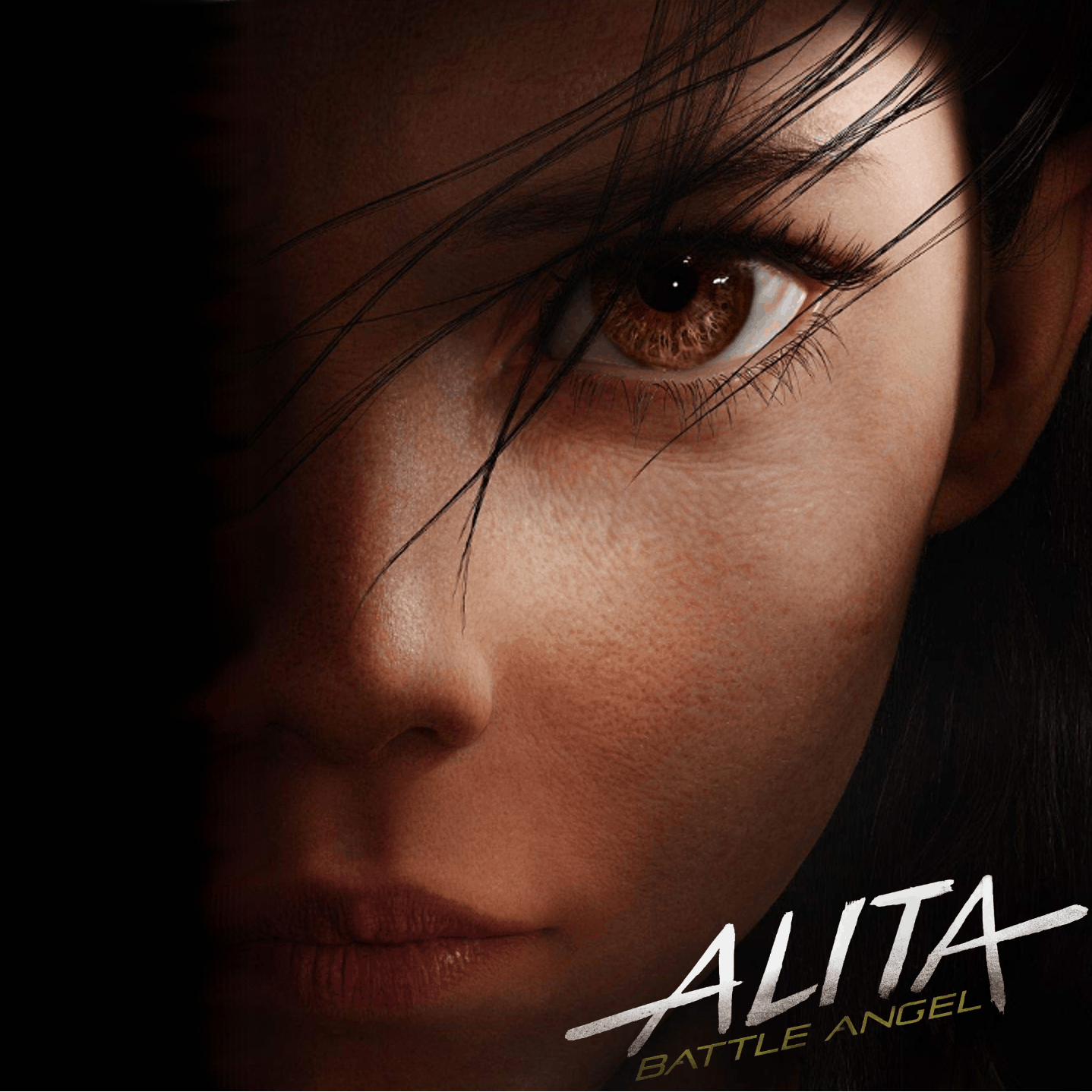 Alita is a fully rendered, CGI character on the surface, with the breakout acting of Rosa Salazar performance-captured at her heart.

The movie opens in the year 2563, 200 years after a great war between Earth and the Mars colony called ‘The Fall.’ Dr Dyson Ido (the amazing Christoph Waltz) is spare parts hunting in the scrapyard, an area of junk dropped from the floating City of Zalem above, which those on the surface use as materials for their lives in Iron City below, and to make new products, the best of which go back to Zalem through transport tubes. While ‘trash picking’ as it is called, Ido discovers the deactivated core (head and upper torso) of a female, total replacement (TR) cyborg. Discovering that she is still alive (her human brain is in status within the core) he rushes her back to his clinic and revives her, attaching her to a superbly crafted cybernetic body he had in storage. When she awakens, Ido and his Nurse, Gerhad (Idara Victor), discover that this cyborg can’t remember her past, or her name. Ido gives her the name Alita, which she very gladly accepts, and then takes her around to teach her about the world she has awoken into. This is the start of Alita’s journey of discovery: of who she is, who she was (through flashback in times of crisis) and how she will fit in the often harsh life of Iron City. 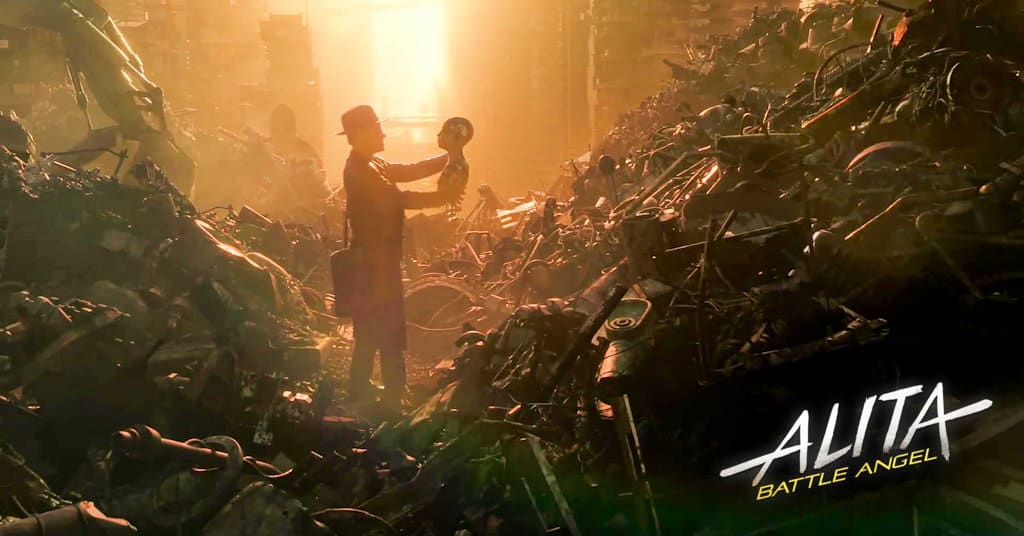 Ido discovers a deactivated cybercore with a living human brain in it while trash picking in the scrapyard.

If you haven’t seen Alita: Battle Angel, more plot points would spoil, but I will touch on some generalizations which will give you the feel for the narrative, and an idea of whether this movie is ‘up your alley’ (see what I did there, fans?) or not!

Although Alita starts out naïve to the harsh realities of Iron City, she’s soon introduced to them, and so discovers the true potential of her absent memories, as flashbacks in times of great danger. As she gains glimpses into her past, she gains confidence, and the will to take the darkness of Iron City head on. By her side is a young man she meets on her first outing, Hugo (Keean Johnson), who takes it upon himself to ‘show her the ropes,’ his core reasoning being that he believes she fell from Zalem, the one place in all the world he longs to reach. During the movie, he becomes torn between his growing feelings for the titular Alita, and his lifelong desire. 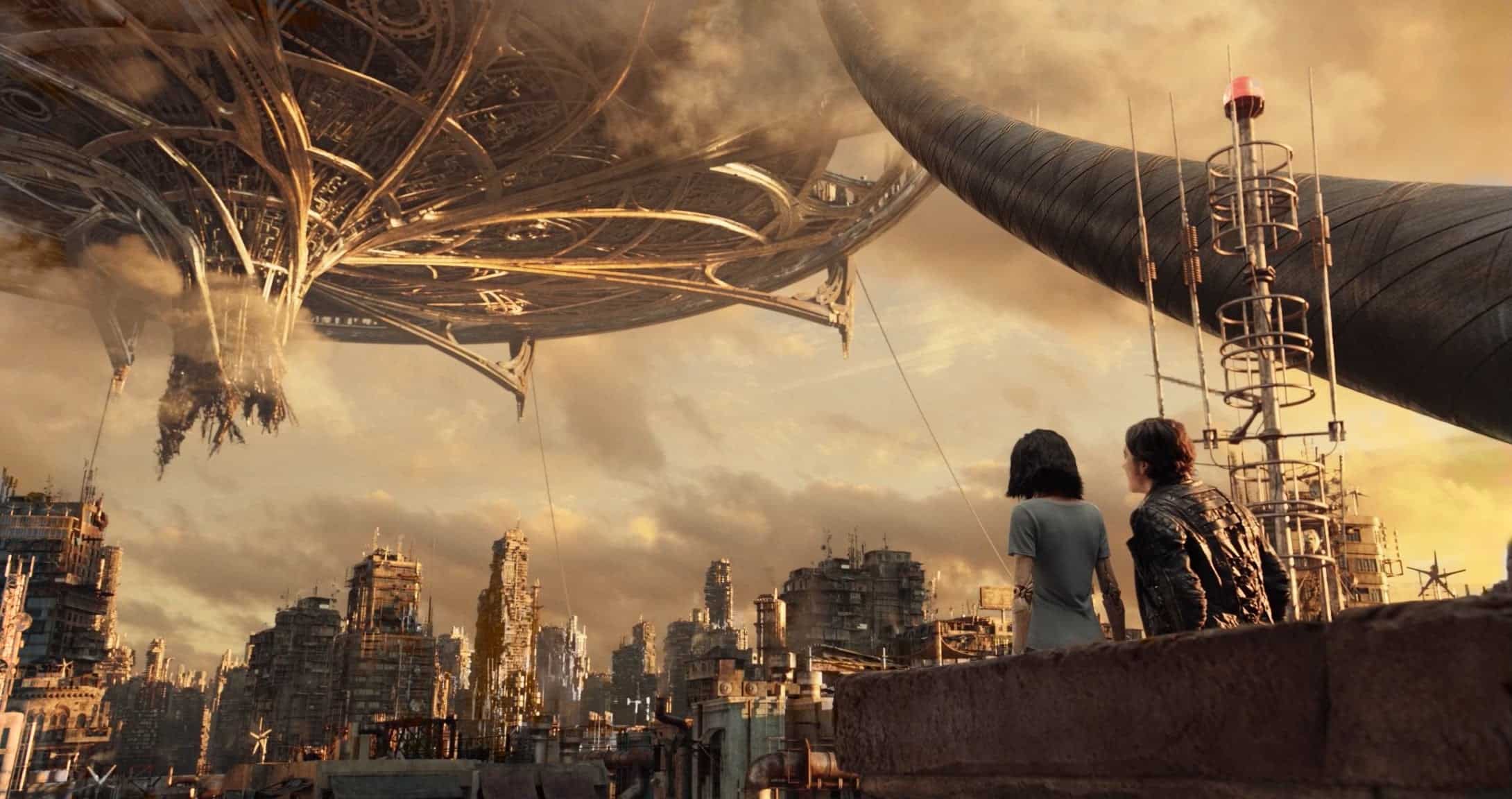 Hugo tells Alita about Zalem, and his life-long dream to one day go there!

There are also excellent performances by the antagonists of this story, such as Jennifer Connelly as Ido’s estranged wife, Chiren, Ed Skrein as the amoral bounty hunter, Zapan, Jackie Earl Haley as the massive and bloodthirsty TR cyborg, Grewishka, and the critically acclaimed Mahershala Ali (who will be talking over playing the day-walking vampire Blade in an upcoming movie) as the Factory Boss Vector. The performances all feel well-suited to their characters, with possibly the weakest being that of Hugo, however that could be due to Hugo’s treatment in the script, more than what Johnson put into his portrayal.

The worldbuilding is excellent and expansive, for a 2 hour long movie. It has a definite Latino flair, thanks to the story location being Central America, and the leanings of the Director, Robert Rodriguez. The source material for the movie is a Japanese manga (adult comic) that began publication 30 years ago and is still being written today, and the movie feels very respectful to the source. As manga to movie adaptations go, this one is at the top of the list. 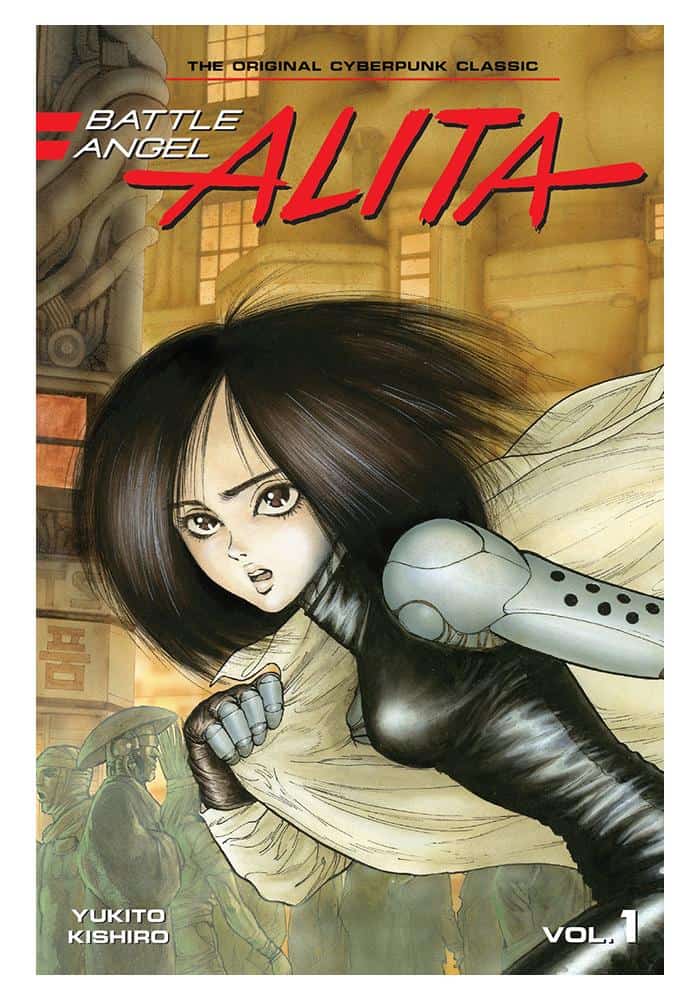 The first volume of the Battle Angel Alita manga. Volumes 1/2 and parts of 3 were adapted for this movie.

This movie is also on the top of several other lists. In the VFX department, it literally shines. The main character, Alita, is fully CGI, as is her mentor, Gelda, in several flashbacks during the narrative. New performance capture rigs were used to gather Rosa Salazar’s stellar performance as Alita, and the the CGI wizards at WETA Digital brought Alita to life, seamlessly melding Rosa’s performance to Alita in 161 scenes. This is the first time a fully CGI main character has been flawlessly integrated into a live action setting. Other cyborg characters were given similar treatment, and significant effort was put into the high quality effects. You can see WETAs own exposé on how the movie was made reality on the WETA Digital Website. 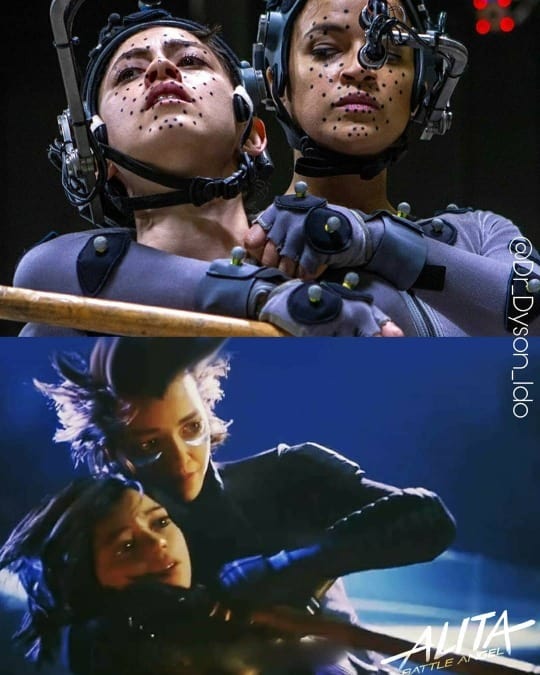 The script is also highly refined, with many subtle tells, foreshadowing, and memorable moments. And it would want to be, as the adaptation was begun in the year 2000, and revisited and tweaked over and over until the filming in 2016. The cinematography has both elements of James Cameron’s work, as well as Robert Rodriguez’s exciting action shots, and for a cyberpunk sci-fi action, it really pays off. The score is also a standout, composed by Tom Holkenborg (Junkie XL), it makes every scene ‘feel’ that much more intense. This movie was a labor of love, and it shows. It is beautifully realised all the way to the bone. 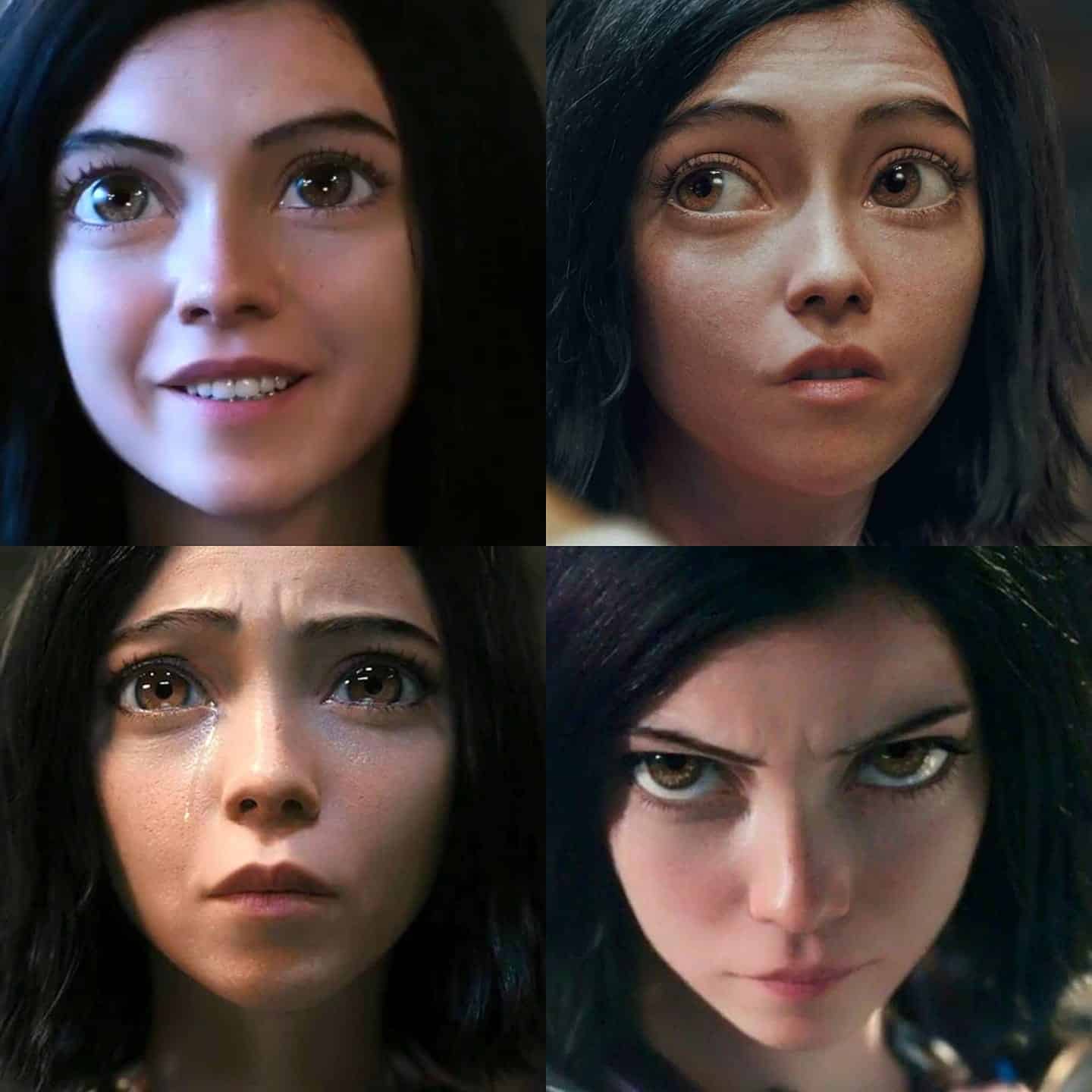 However, no movie is perfect. More backstory on the antagonists and Hugo’s need to reach Zalem would have rounded out the story more, and time showing Alita training for the part NASCAR, part deathmatch sport of Motorball would have helped show her skill development. I expect these scenes were cut from the script to get it down from 2.5 hrs to 2 hrs, as budgeting required. Despite this marginal over-triming of the script, Alita: Battle Angel really does have something for everyone. From 9 to 99 years old, the deeply human struggles portrayed in this movie touch everyone who relates to the human condition.

At her core, the character of Alita is an exemplar of someone living their true life. That is, giving unconditionally, fighting all-out for what they believe in, and making mistakes to learn and grow, and owning those mistakes. Alita is a pure force, one untroubled by guilt, doubt, indecision or unjust strictures the society of her time would force upon her. Her ingrained combat senses, her position as an outsider, and her blank slate, are enviable qualities for us everyday people who have so much emotional baggage to carry. If you want a thrill ride with a mature script, great acting, fantastic visuals, and a great score, one that keeps on giving the more times you watch it, I can heartily recommend Alita: Battle Angel as an excellent way to get lost in a dystopian future for a few hours.

On this Alita Day (9/9), or if you’re reading this after that date, give Alita: Battle Angel a try. I think you’re more likely to love this movie than not, and love the character. And for those that are already ‘in the know,’ give Alita: Battle Angel another watch. I’m sure you’ll see yet another facet to this (mostly) hidden gem. Available on Disney+ in Canada, Europe and Australia, Disney Max across Asia, and to rent/buy on YouTube, iTunes, GooglePlay etc. Excellent 4K/3D/HD blu-ray combo packs are also available.

Ray D., also known online as Maxtac Jurai, @OptimizticOzzie, and ‘that guy who talks too much about Alita: Battle Angel,’ lives near Sydney, Australia, loves his family, writing, good stories, movies, gaming, RPG’s, and geekdoms of many kinds - but in his heart of hearts, he’s a #AlitaAdvocate through and through.