The winter holiday season is innately one of the supernatural as we celebrate magic and wonder with generosity and kindness. Connecting with those around us by giving gifts is meant to bring a sense of togetherness, peace on Earth and goodwill towards men.  So it is no wonder that live performances during this time of year seem to be very important.  In this months examination of genre stories in live performances, I will be looking at three musicals based on Christmas movies, some of them old classics and some of them new. Working from the newest film to the oldest we have, Elf: The Musical, A Christmas Story: The Musical and Scrooge: The Musical. 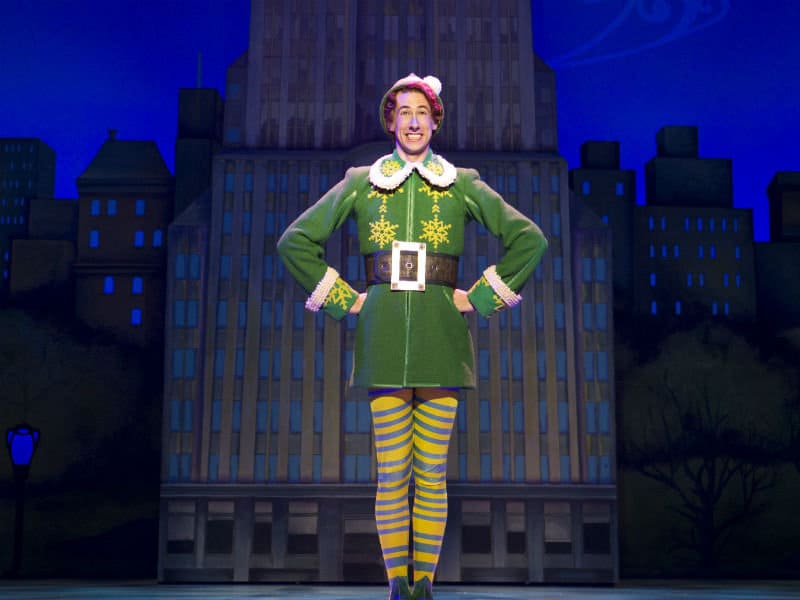 Elf – The Musical: The movie “Elf” came out in 2003 and instantly became a new holiday classic.  Buddy Hobbs, an orphan baby, crawls into Santa’s bag and is whisked away to the North Pole, where he is raised by the elves.  3 years later (30 in the movie) he is told by Santa that he is not an elf, but a human and suggests he travel to New York to find his real father, Walter Hobbs.  Buddy, discovering that Walter is on the naughty list and that his son, Michael doesn’t believe in Santa, makes it his goal to win over his birth family and remind New York City about the true meaning of Christmas.

With Music composed by Matthew Sklar and lyrics by Chad Beguelin, the musical opened during the Broadway Christmas season in 2010-2013 and in the West End in the 2015-16 season with national tours during the holiday season ongoing.  The musical numbers are high energy and the story relates to children of all ages. The show deviates from the movie at times with some characters cut or combined, the narrator switched to Santa and Walter’s child is changed from a girl to a boy.  The reception was favorable with ABC News reporting it as a “a tight, polished, expensive-looking affair that has enough jokes for adults and enough special effects for kids.”.  The show was only nominated for one award, the 2011 Drama League Awards for Distinguished Production of a Musical. 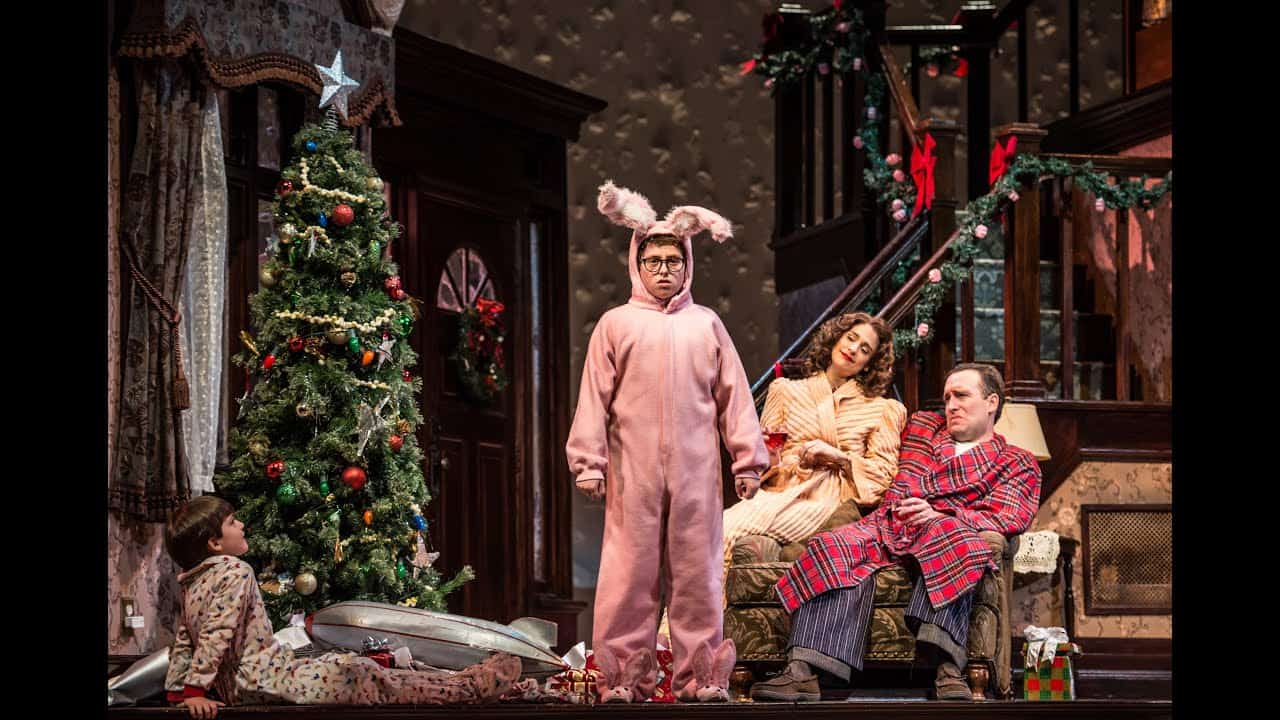 A Christmas Story – The Musical: Based on the 1983 movie of the same name, which is a staple of most households this time of year. The plot remains consistent with the film and centers around Ralphie, a young boy in 1940 Indiana, who wants a Red Ryder Carbine Action BB Gun, but whose mother keeps denying, warning Ralphie that “You’ll shoot your eye out”. Undeterred, Ralphie attempts to get the gun by any means possible while remaining on Santa’s “nice list” and surviving the bullies of the neighborhood and in general just being a child, but he is consistently met with “You’ll shoot your eye out”. Culminating in opening presents on Christmas morning.

The show officially opened on Broadway in November of 2012 and ran through December having several national tours and a 2017 television broadcast of the show. The production was nominated for several awards including the Outer Critics Circle Award, Drama Desk Awards and Tony Awards, but did not win in any category. To be quite honest, this is the one show I can write very little on.  I have never liked the original movie and therefore have not seen the musical in any of its incarnations. With the score and lyrics by the team of Pesek and Paul (Benj Pesek and Justin Paul), the show was a critical success. The New York Times writing, “The stage version lightens up a little on the cute, smart-alecky asides… making room for the music and allowing the story mostly to speak for itself…. Mr. Pasek and Mr. Paul have provided a likable, perky score that duly translates all of the major episodes in the story into appropriate musical numbers.”, and the reviewer of the Seattle production writing, “Just about every nostalgic, humorous vignette, celebrating a kind of quirky childhood innocence enshrined in America’s past, gets an up-tempo romp in the polished, very busy score…. performed with vigor by an admirable cast of 33…. But overall, A Christmas Story looks spiffy, with Walt Spangler’s snow-cave design brightened by giant Christmas packages and trees and Howell Binkley’s twinkly-tastic lighting. If it’s too long a haul, there’s a lot here to please kids.” Scrooge -The Musical: This production is a bit different as it started out as a Movie Musical in 1970, which is a retelling of A Christmas Carol with songs and dancing. The story by now should be well known.  Ebenezer Scrooge is visited by four ghosts one Christmas Eve.  Each one showing him his past, present and future, in the hopes of redeeming him and changing this greedy man into a charitable one. 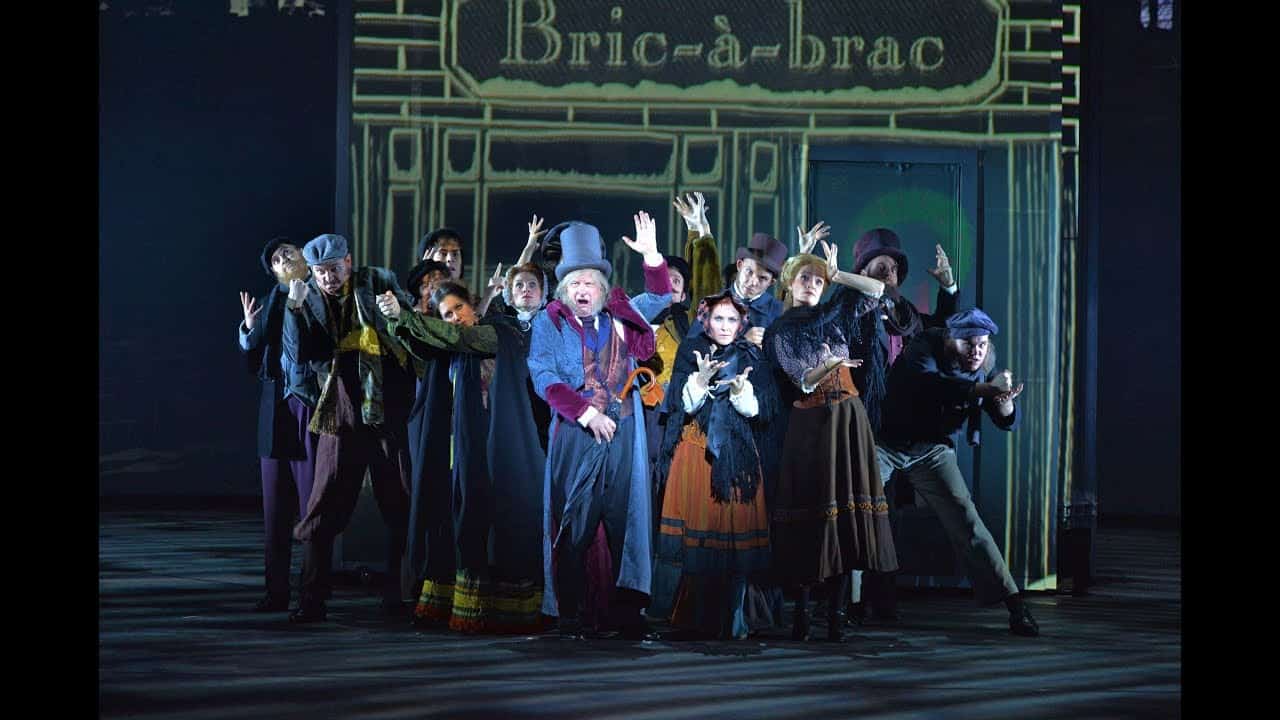 Although stage productions of the movie happened for years before, the show was officially revamped by original composer / lyricist Leslie Bricusse adapting and adding several songs to create a new stage production which opened in 1992. The original film garnered Bricusse an Academy Award Nomination and Albert Finney who played Scrooge won the Golden Globe Award for Best Actor in a Musical/Comedy.  There have been several European, Australian and US productions as well as a Japanese production.  I have a particular connection with this musical and with live performances of A Christmas Carol in general.  I have been involved with several different productions of it, including directing the musical once and it was the show that first got me into technical theatre designing the properties for a high school production. 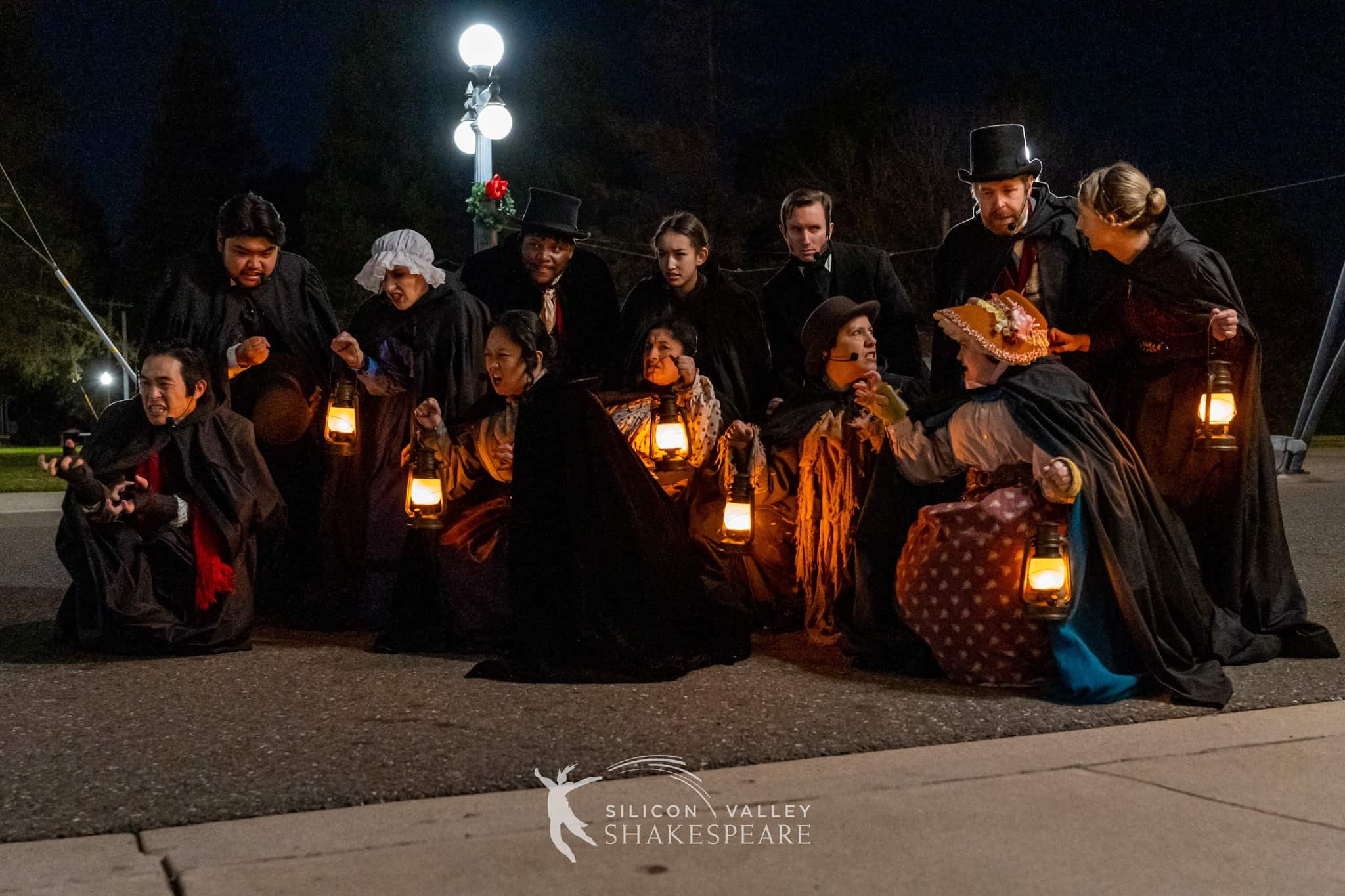 On a very personal note: Every year, in San Jose, Northside Theatre, a company I did a lot of work with, staged a production that was originally adapted by the theatre founder Richard T. Orlando. This show was the closest adaptation to the original source material I have ever seen and was so wonderfully theatrical.  I worked tech on this show for several years and doing so became its own holiday tradition.  To my own disappointment, before moving from the area, I never gave myself the chance to be in the production, but I was lucky enough to run lights while my husband (Comic-Watch Media Editor Rickey Dilley) gave a stirring and unique turn as Marley.  Unfortunately, Richard passed away several years ago, and Northside Théâtre eventually permanently closed during the pandemic, but to my joy and happiness, this year a new interactive production of this adaption opened, produced by Silicon Valley Shakespeare and several close friends are integrally involved. 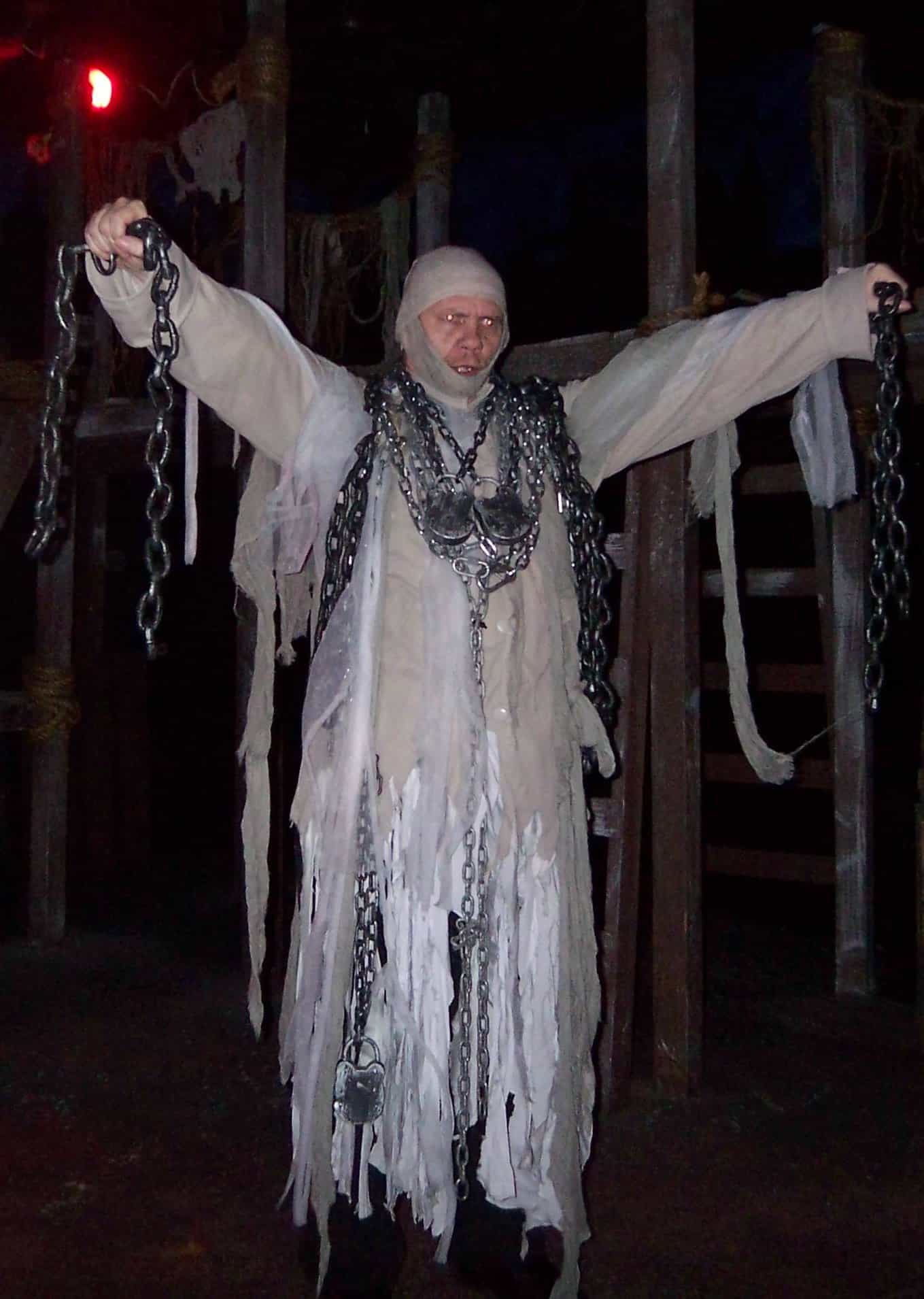 Pictured above: Rickey Price as the ghost of Jacob Marley in the 2009 production of A Christmas Carol at Northside Theater in San Jose.