The work of costumer, Alexandra Byrne, is familiar to most fans of the Marvel Cinematic Universe, even if her name is not. Byrne began her journey into the MCU by working on the 2011 film, Thor. Kenneth Branagh, director of the film, worked with Byrne in other projects and thought she would be the right person to create the look of the film’s lead.

For inspiration, Byrne said she looked to comic artist and co-creator of Thor, Jack Kirby. Byrne said her focus would be on Thor’s arms, which is evident in the resulting design for the character.

Byrne created a blue tunic, overlaid in silver with the comic-accurate six-disc detail. Arching shoulder pieces gave the actor a broader appearance and provided support for the bright red cape. The gathering effect on the shoulder pieces gave the cape volume without it getting in the way of the actor’s movements. The sleeves of the tunic were made up of diamond-shaped pieces of silver metal, giving it a woven feel. This detail mirrored the comic look, at the time. Byrne even translated the character’s winged helmet to the screen.

The design Byrne created for Loki was yet another piece of costuming excellence. Its base is a torso piece which begins as smooth grayish-black leather, then proceeds on to several pieces of interlaced leather to give it texture. The coat overlay is a sleeveless piece with a broad front and long bottom, which is split into sections. The sleeves appear to be part of the tunic but also include the same interlaced leather. A single-shoulder pauldron, bracers, and a collar add still more intricate detail to the costume. Lighting on the costume highlights the use of a darker green and more metallic gold.

Byrne even managed to recreate Loki’s horned helmet, which played well on film. Never does it come across as comical or out of place. One way this is achieved is, Byrne incorporates the horned look into the armor of the other Asgardians and into Odin’s helmet, as well. Although much more subtle, Odin’s horned helmet also has the same wings as Thor’s, giving it a unifying feel. Odin’s breastplate is similar to Thor’s in so much as it has the same interlocking metallic pieces and two of the same upper-chest discs. This kind of unifying detail helps to ground the viewer in the world of Asgard.

Also included in the first Thor film were comic-book staples, the Lady Sif and Thor’s fighting companions, the Warriors Three.

Sif’s costuming was more than just the female version of Thor. It had its own look and construction. In her introduction, we see her tunic is silver metalwork over a dark red. She wears banded metal gauntlets, also over a dark red. As Thor and other Asgardians do, she has two large discs at the top of the shoulders, from which a narrow cloak is later attached. A silver mesh-type material covers the top portion and gives the tunic some length.

Each of the Warriors Three has a distinctive style, much like in the comics. Hogun the Grim, the unspoken leader of the Warriors, is dressed in black, dark blue, and silver. The horned look of his tunic looks like an homage to the horned, fur cap he wears in the comics. The style of armor is very different than the other Asgardians but not so much that it makes him look out of place. Fandral, the swashbuckler, is also armored more than in the comics. His armor is a layered tunic with shoulder pauldrons and a glove/gauntlet combination. The usual green is woven into the tunic’s sleeves and accents. For their journey to confront the Frost Giants, he is given a large fur collar and trimmed gloves, a subtle nod to his comic book look. Volstagg, the last of the Warriors is armored, as well, his look one of layered, interlocking gold over a deep reddish-brown fabric. It is a far cry from his magenta and gold comic book look.

Byrne would go on to duplicate Thor and Loki’s costumes for Avengers in 2012. Both characters would be featured in the film with only subtle differences in their costumes. True to her word, Byrne would emphasize Thor’s arms but in a different way. The diamond-patterned sleeves would be removed for parts of the film and smaller shoulder pieces meant less volume in the cape.

The blue tunic would be replaced with one of black leather. Two of the six chest discs remained, serving as clasps for the shorter, less voluminous red cape. Leather straps and wrist coverings served as gauntlets and the winged helmet disappeared. Still in black and darker green, Loki appeared alongside his brother without any of the gold accents. These stripped-down versions of the characters would see further revision as the film progressed.

Cate Blanchet joined the cast as the Norse goddess of death, Hela. Rubeo also credited Jack Kirby for the inspiration behind Hela’s costume. Like in the comics, the character wore a black bodysuit with green accents. Hela debuted with dark eye-makeup and long, dark hair. The costume created for the film had a hint of bare shoulder and a few rips in the leg, suggesting a skirmish had occurred. After attacking Thor and Loki, Hela manifested the headpiece many comic book fans associated with her character. 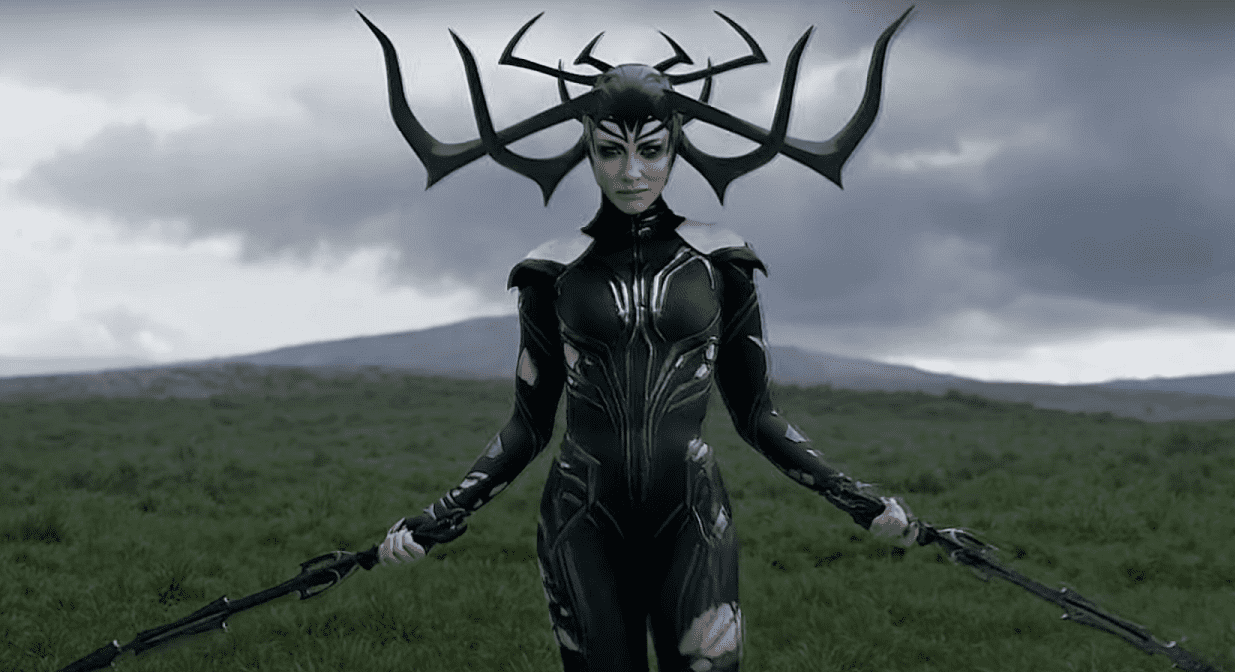 As the film progressed, Rubeo added a simple cape to Hela’s look while removing the headpiece, at times. Thor also loses his hair and his winged helmet gets scaled down. For the film’s final battle, the title character and Loki are dressed very much as they were before their battle with Hela. The accents are there, but they are subdued. Loki’s horned helmet, now a horned band, remained as part of Loki’s wardrobe.

Alexandra Byrnes and Mayes Rubeo approach the characters of the Thor films in very different ways. Both costume designers bring a different aesthetic to the characters, creating unique experiences for movie-goers and comic book fans.