I love a good creature feature, and Crawl fit that bill perfectly. It’s fun and keeps you on the edge of your seat for the majority of its short 87 minute run time. Granted, it isn’t always entirely realistic, but what creature features stick entirely to realism? None that I can think of.

With a quickly approaching hurricane threatening the Florida panhandle, a daughter (Kaya Scodelario) races to find her missing father (Barry Pepper).  When she finds him, he’s been trapped in the basement of her childhood home, hurt by an alligator which is still in the basement with him. As the hurricane comes closer, the alligators came in with the rising waters. Pepper was hurt and managed to get to an area of the basement the gator, which is huge, couldn’t get to. Unfortunately, the waters are still rising throughout the movie, which is a problem if you’re stuck in a basement.

Scodelario goes on the rescue mission to get her dad. Here’s where the movie surprises its viewers a few times throughout the movie, there isn’t just one alligator. I got the impression from the previews there was just the one and that the movie would be similar to Burning Bright in which the protagonist was pitted against one tiger alone in a house. Nope. Not long into her basement rescue, viewers find out there are two ‘gators down there with the father-daughter duo. 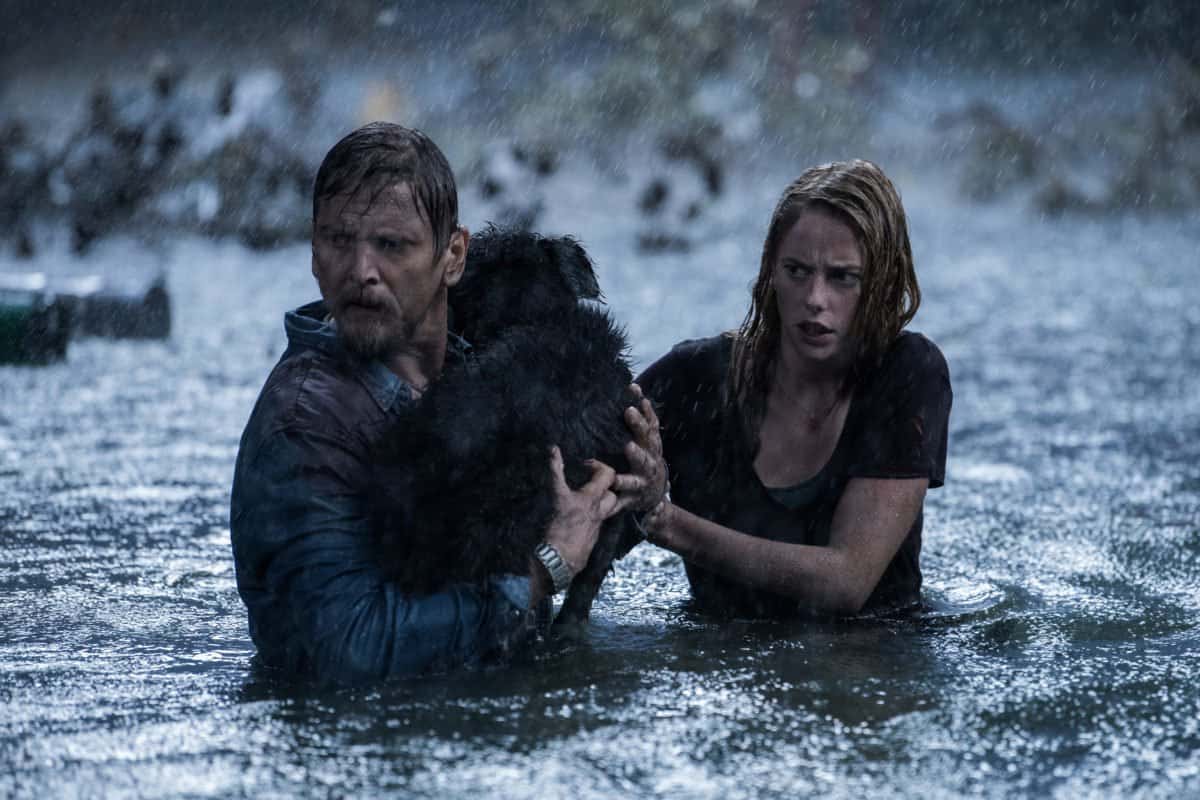 Directed by Alexandre Aja (The Hills Have Eyes) and produced by the legendary Sam Raimi (Evil Dead, Spider-Man), you should expect a good horror-filled popcorn flick, and they deliver. The gators are enormous, quick, and scary. They provide extreme jump scares because there always seem to be more of them than you think. As when you find out there’s two in the basement with the main characters, you also find there are plenty more outside the house swimming around, awaiting any would be helpers.

The effects are good, the acting even better. The suspense of the movie builds little by little as the characters try plan after plan to get free, all the while the water level in the basement rising. If one threat doesn’t get them, the other will. Plus, the alligators may not be able to crawl to Barry Pepper at ground level, but as the waters rise, the alligator threat rises. The bars blocking them from crawling would not block them from swimming a little higher.

The only negative is the plot of the alligators. Yes, they are dangerous. However, alligators aren’t quite the manhunting beasts portrayed in the movie. That’s more akin to crocodiles. Regardless, the plot of “two people trapped in a basement with alligators” can only go so far before introducing some more elements. Bloodthirsty alligators. Check. Passers-by to up the movie’s body count due to even more blood-thirsty gators out in the streets? Also, check.  Sometimes, it’s OK to throw 100% realism out the window and just have fun watching a scary movie.

“Man-eating water creatures swimming through the streets during a hurricane” may sound familiar to you. It’s the very basic version of the plot of Sharknado. There is, thankfully, a big difference between Sharknado and Crawl. Both are fun creature features, but Crawl is a bigger budget, better acted, less cheesy, and creepily paced movie.

Some horror movies provide little to no characterization, so viewers end up caring very little what happens to the protagonists. Crawl does its characters justice. With backstory on both the father and daughter, including a broken marriage for dad and a slight estrangement for the father and daughter relationship, viewers care about these two. You want them to make it. You fear they won’t. This engagement makes the suspense all the greater and the jump scares all the more startling. You may find yourself so close to the edge of your seat tha you fall out of it after one of those jump scares!

The end result of Aja and Raimi’s new creature feature is a pure fun horror movie that will make you jump often and enjoy every minute of it.