If you are a fan of the Sword and Sorcery subgenre of fantasy films, the 1980s was a good decade to grow up in, like I did.  There was a lavishness to a lot of these productions that gave them something magical (pun intended) and epic.  In this article we will examine just a few of the many films and television series that graced us with their presence nearly 40 years ago.  When I was choosing the productions, I was going to write about, I got a rush of nostalgia as each one of them is a favorite from my childhood.

Excalibur (1981): Merlin (Nicol Williamson) helps Uther Pendragon (Gabriel Byrne) obtain Excaliber, the mythical magical sword that links the king to the land. Just before his death, after he was ambushed, Uther plunged the sword into a stone, claiming that if he couldn’t have it, then no one could.  It was proclaimed by Merlin, that he who pulls the sword from the stone, would be king.  Some years later, Arthur (Nigel Terry), who has been raised by Sir Kay (Niall O’Brien), pulls the sword from the stone and the epic adventure begins. 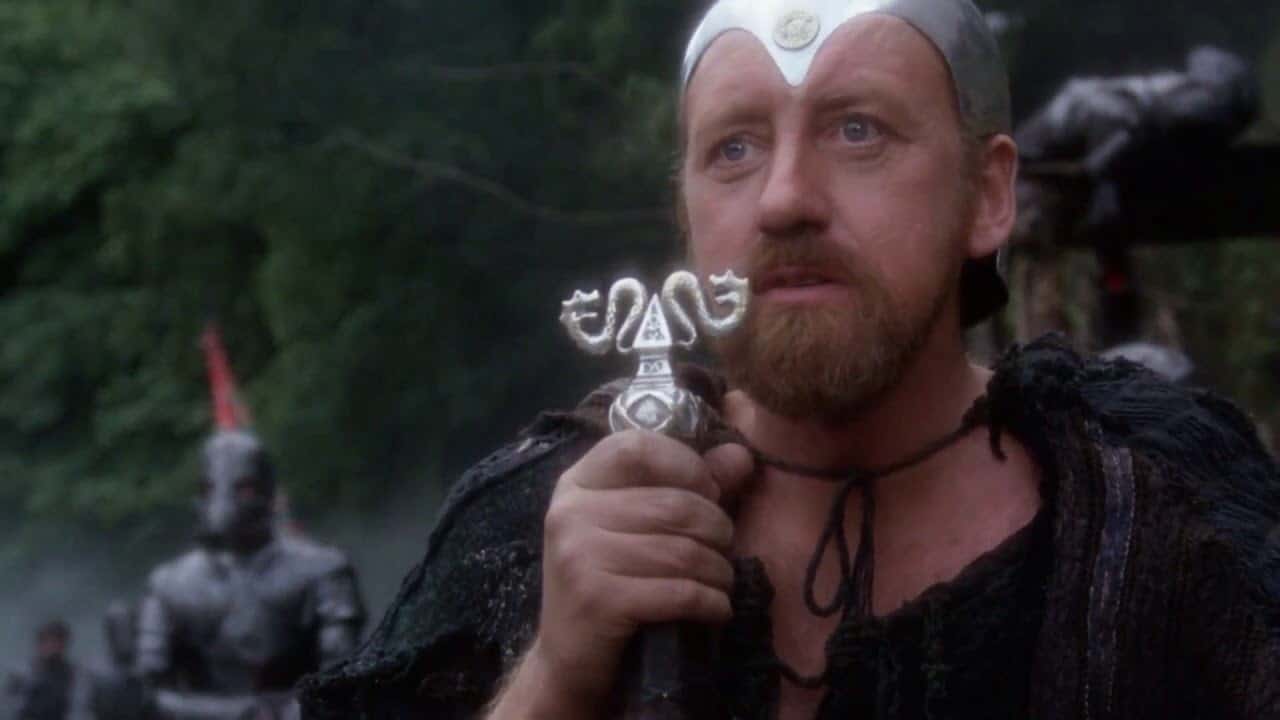 Of all the movies I will be examining, this is by far my favorite, and probably the most successful.  With lavish sets, a wonderful storyline and a cast that was amazing, which includes Helen Mirren, Patrick Stewart and Liam Neeson.  The music used both existing songs, mainly from Richard Wagner and Carl Orff and original themes by Trevor Jones. The classic O Fortuna became synonymous with the film. The script was well written with a wonderful balance of dry humor and drama.  Most of the humor stemming from Nicol’s delivery as Merlin. A couple interesting things behind the scenes about Helen Mirren who played Morgana Le Fay.  The casting of Helen opposite Nicol was no accident, the two actors were not on good terms due to an incident that happened a few years before, and producer / director John Boorman, thought the off camera tension would come through in the film.  In addition, Mirren met Liam Neeson while filming this movie and became romantically involved, living together for four years. The Beastmaster (1982): I was obsessed with this film after first seeing it on a Betamax video tape we rented somewhere around 1983.  I wish I would have seen it in the theatres.  The quality of this film is far below that of Excalibur, but it has it’s own special charms.  Loosely based off of the 1959 novel, The Beast Master by Andre Norton, the film chronicles the adventures of Dar (Marc Singer), who has the ability to communicate and see through the eyes of animals.  He is accompanied by a hawk, a black panther (technically a tiger dyed black, since tigers are easier to handle) and two ferrets. After meeting a slave girl named Kiri (Tanya Roberts), Dar travels to Aruk to save her from being sacrificed and through the course of his journey, finds out who he really is.

The script is campy, the acting wasn’t going to win anyone an Oscar and the storyline is a bit confusing, but it honestly is just fun to watch.  The film was not a commercial success in the theaters, but did find an audience in it’s cable television exposure, spawning two subpar sequels and a syndicated television series.  Behind the scenes, there was friction between director Don Coscarelli and the executive producers over casting and editing.  Coscarelli wanted Demi Moore to play Kiri, but the producers hired Tanya Roberts instead, and the big bad of the movie, Maax, was written for Klaus Kinski, but Rip Torn was cast in his place after a salary dispute.  In addition, Norton, the original author of the book was unhappy with the drastic changes made to the original story and asked that her name be removed from the credits. 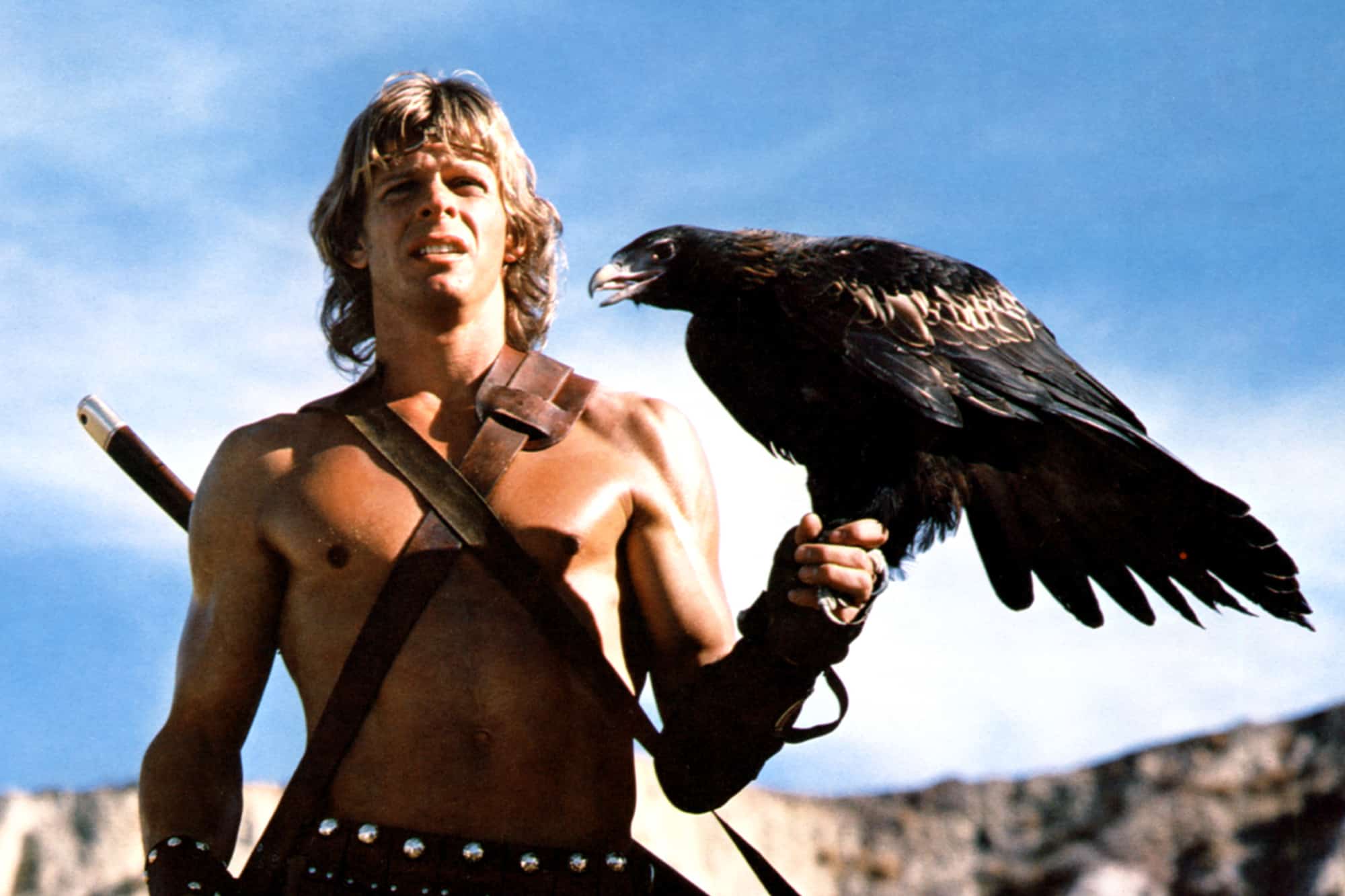 Wizards and Warriors (TV, 1983): This was a fun and lively television series that was played tongue in cheek and was more of a parody of the genre.  In the realm of Aperan, the neighboring kingdoms of Karteia and Camarand are in continuous conflict with each other.  Prince Erik Greystone (Jeff Conaway) battles evil Prince Dirk Blackpool (Duncan Regehr), both have wizards that assist them.  Erik is engaged to the spoiled Princess Ariel Baaldorf (Julia Duffy), who is more concerned with her furs, jewels and leather pants.  The show was a midseason replacement for a cancelled series and got only 8 episodes.  Although it was well received by critics, it got low ratings and so was not renewed.  The script was witty and the humor was well delivered by all the actors.  The series won a primetime Emmy Award for Costumes and was nominated for Outstanding Achievement in Hairstyling.  I remember watching this the night it premiered and just loving it, rewatching it now, is honestly what inspired this article.  It is entirely a product of the 80s, but still pretty fun to watch today. The series is available on Amazon. Krull (1983): The last film I will really cover is Krull, a highbred of two genres. At it’s heart, the film is an epic sword and sorcery love story, but it actually takes place on another planet battling an alien army with weapons that shoot lasers. The story involves an alien referred to as “The Beast” that travels to other planets to conquer.  On the planet Krull, the Beast kidnaps Princess Lyssa (Lysette Anthony) as she was marrying Prince Colwyn (Ken Marshall) in an effort to unite their two waring kingdoms so they could battle the armies that were invading their planet.  With the help of Ynyr (Freddie Jones) Colwyn searches for an ancient weapon and an army to help defeat their foes.  He gathers a group of bandits lead by Torquil (Alun Armstrong), a shapeshifter named Ergo (David Battley) and Rell the cyclops (Bernard Bresslaw).

I was 13 when this film came out and saw it in the theatre with my sister, I remember loving it and have watched it a few times since then, but not recently, until now.  Although I still like the movie, I realized that there are a lot…I mean a lot…of scenes of the characters traveling to places, which isn’t really all that interesting.  It almost feels like they didn’t have enough material for a full movie, so they just filled in time with wandering.  Liam Neeson and Robbie Coltrane are characters in the group of outlaws.  Both actors go on to bigger and better things.  Lysette Anthony would go on to play Angelique in the revamp of Dark Shadows in 1991 as well as Leslie Giles in another of my favorite films, Without a Clue. Lysette also starred in Trilogy of Terror II playing 3 different roles, the third of which fights the dreaded Zuni Warrior doll. Over all, the actors in the film are quite good, but the script and storyline don’t hold up well over time. 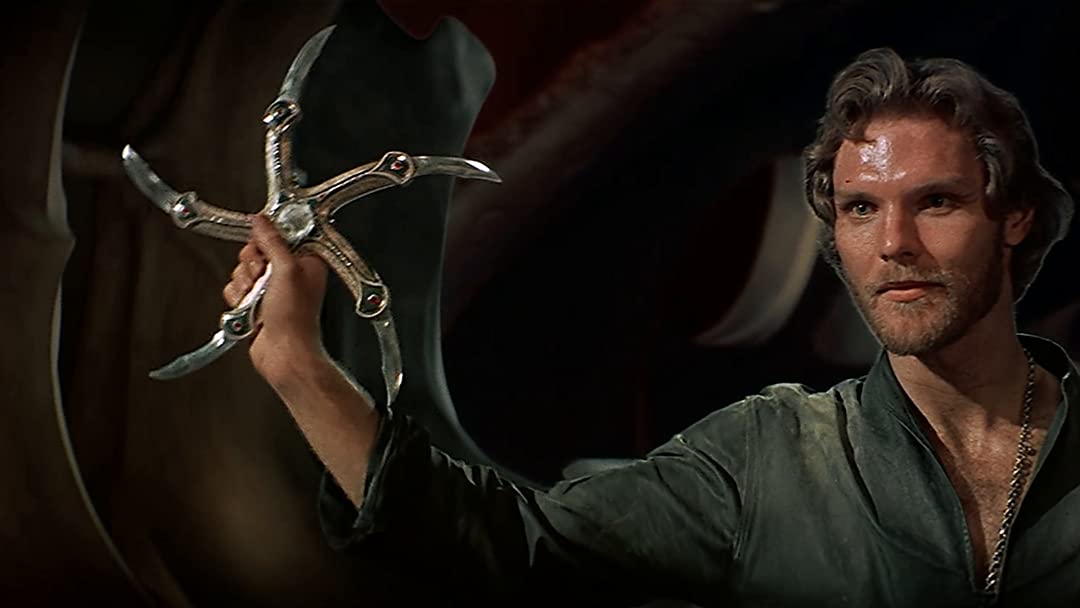 There are so many more movies and television series that I could and probably should have mentioned.  Some of the ones I did not cover, I have either covered in other reviews, or plan on covering them in the future.  Conan the Barbarian (1982), The Princess Bride (1987), The Sword and the Sorcerer (1982), Dragonslayer (1981), Willow (1988), and Robin of Sherwood (TV series 1984), not to mention Highlander (1986) which is slated for a big budget remake with Henry Cavil are just a few of the multitude of media that was available for your viewing pleasure during the 1980s.