Eternals: The Most Human of Gods 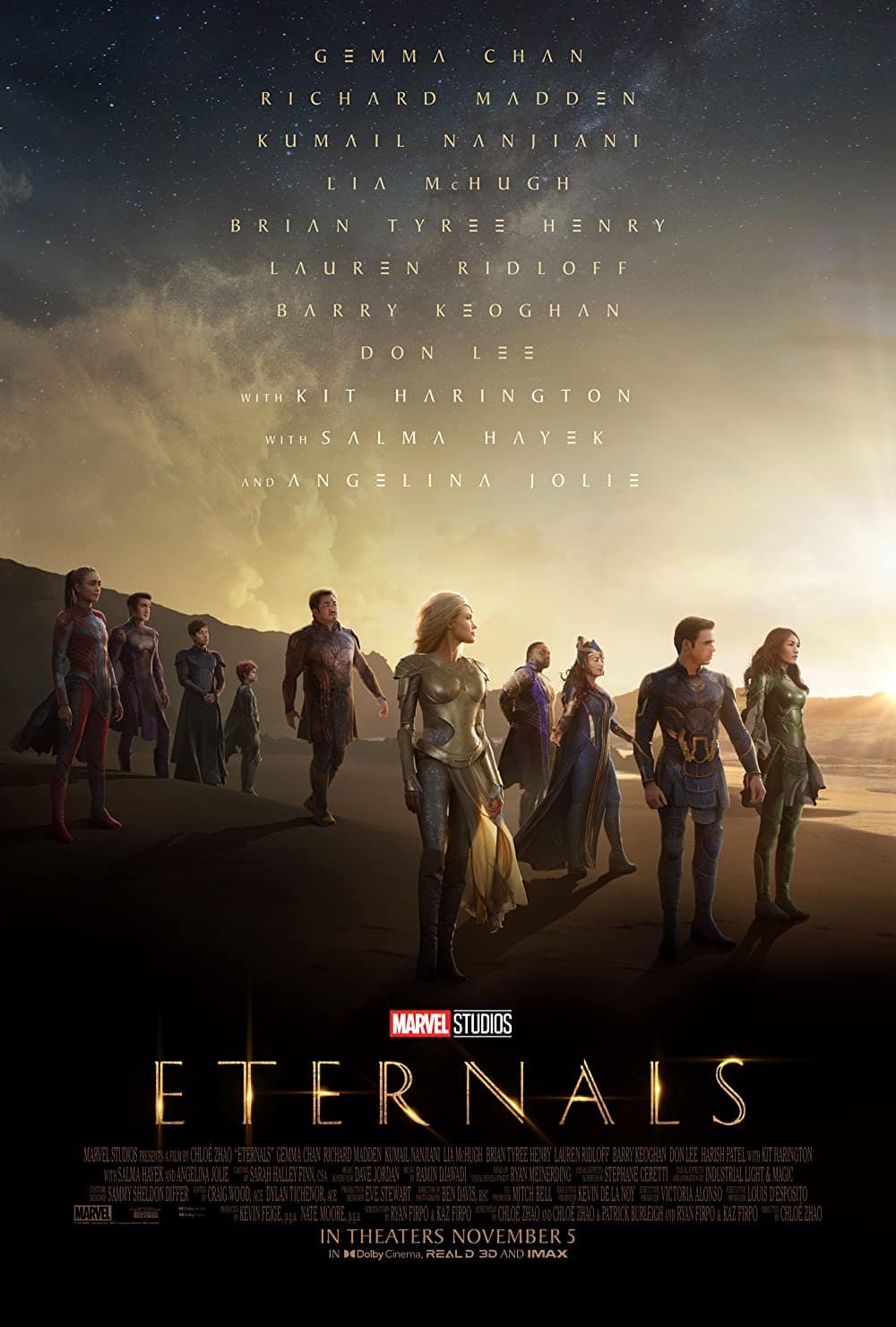 Eternal aliens are sent to Earth to protect it's inhabitants from monstrous Deviants and to ensure that the human race progresses, without interfering in any conflict not involving Deviants.

It has been two years since I have seen a movie in the theatre, and I was very excited that my first theatre experience after such a long hiatus would be a Marvel (MCU) movie.  The Eternals tells the story of super powered eternal beings, from the planet Olympia, sent to Earth in 5000 BC to live amongst the human population and protect them from the Deviants (large deadly creatures).   They are forbidden in interfering in any conflict, no matter how big or small, as it could interfere with the natural evolution of the Earths inhabitants.  This included the attack of Thanos and the wiping out of half of all life in the universe.  The story is told in both flash backs and the present, explaining to the viewer how, after all the Deviants had been defeated (or so they thought) the team went their separate ways, as they waited for the official recall back to Olympia, and over the centuries, many had little contact with each other. 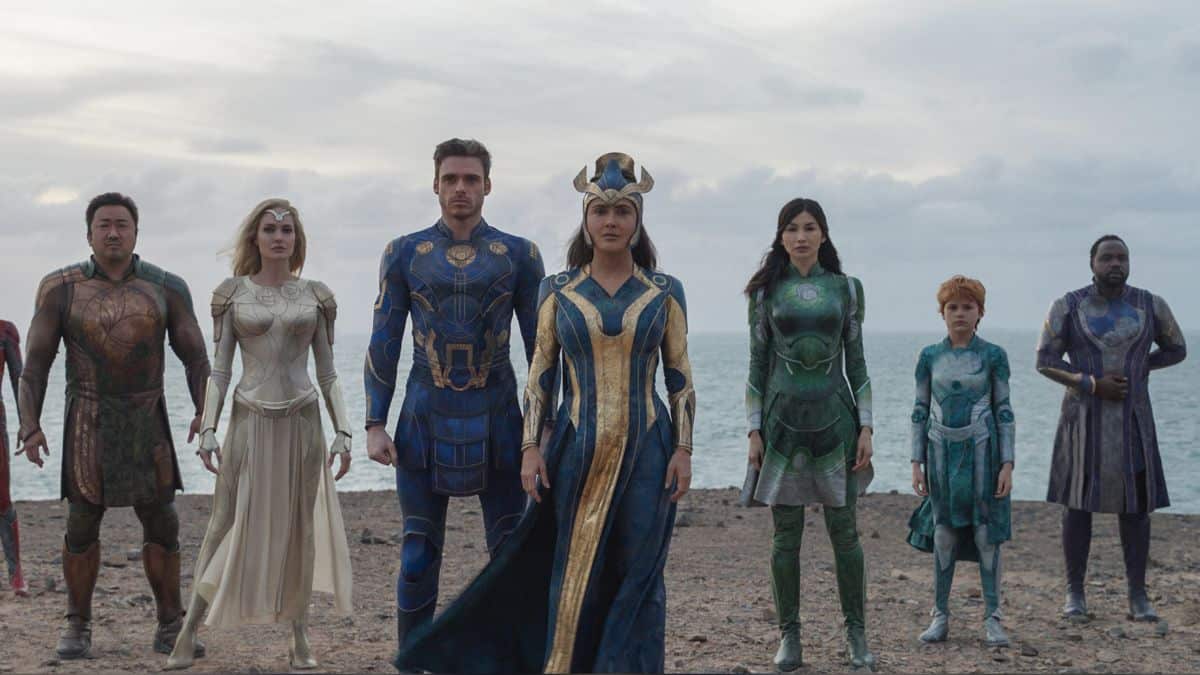 Each of the Eternals have unique gifts bestowed on them by the Celestials, the cosmic entities that create and maintain the Universe.  There heroics in protecting the planet from Deviants, became myth and legend and is why many of them are so similar in name and deed to the Greek Gods.  Led initially by Ajak (Salma Hayek) who has healing abilities, the role of leader is later passed to Sersi (Gemma Chan) who can manipulate inanimate matter through physical contact.  For thousands of years she was in a relationship with Ikaris (Richard Madden) who is the most powerful of the group with abilities similar to DC Comic’s Superman.  Sprite (Lia McHugh) is an eternal child who is forever trapped in the body of a child, but with the mind of an adult and the ability to create illusions.  Kingo (Kumail Nanjiani) can produce cosmic energy projectiles from his hands.   He is also the comic relief of the movie.  Phastos (Brian Tyree Henry) an intelligent inventor who can pull together great weapons and devices with nearly a thought.  He is also the first out gay character in the MCU and shares and onscreen kiss with another man.  Makkari (Lauren Ridloff) is a speedster, and the first deaf character in the MCU, but she can feel the tiniest of vibrations, so she knows when you are talking.  Druig (Barry Keoghan) uses his mental domination and mind control to help keep the peace amongst humans, even when he isn’t supposed to.  Lastly, Gilgamesh (Don Lee) has super strength and can produce a type of protective cosmic gauntlet who has a close bond with Thena (Angelina Jolie) who is quite plainly the embodiment of Athena, the goddess of war.  She is a skilled fighter and can produce various types of energy weapons, such as swords, shields and spears.  There are various humans that share the screen, but we won’t get into them, so not to spoil anything. 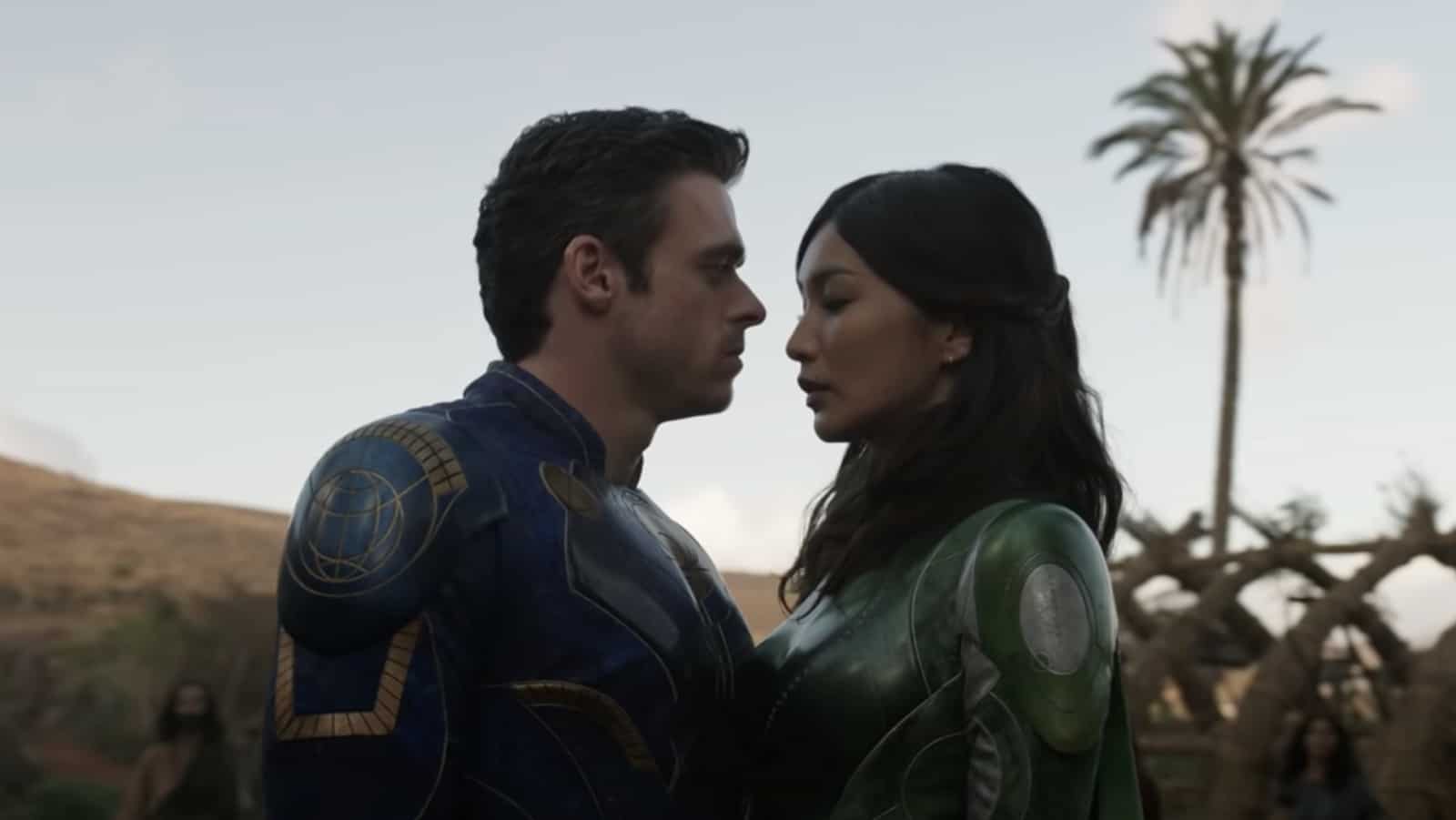 The Good: I, being a more DC rooted fan, know little about the Eternals, but was excited for this movie.  The trailer and teasers all felt a bit more artistic, with a certain type of Zen quality that I found very enticing, and I was not disappointed.  I know that it will probably not be a fan favorite, but I really enjoyed it.  There is a lot of care and heart in the movie, and for beings that have lived for thousands of years, they have found a kind of humanity, that most humans are missing.  There are a lot of heavy themes that ride under the surface, which allows for the soul of the film to be both an epic adventure and a touching morality tale.  There are twists, turns, romance, friendship, and betrayal.  It could possibly have been the excitement of returning to a public viewing of a movie, or that I needed a bit of hope in my life right now, but I walked away from this movie feeling touched.  The exposition is well done, but not overdone in most parts.  I connected with several of the characters and, even the ones I didn’t connect with I felt a kind of empathy for.  The performances were all very good and combined with Chloe Zhao’s directing there was a level of complexity to these characters that really shined.  The special effects were stunning, the fight scenes were enjoyable and exciting, and the music was very appropriate, adding to the tone of each scene. 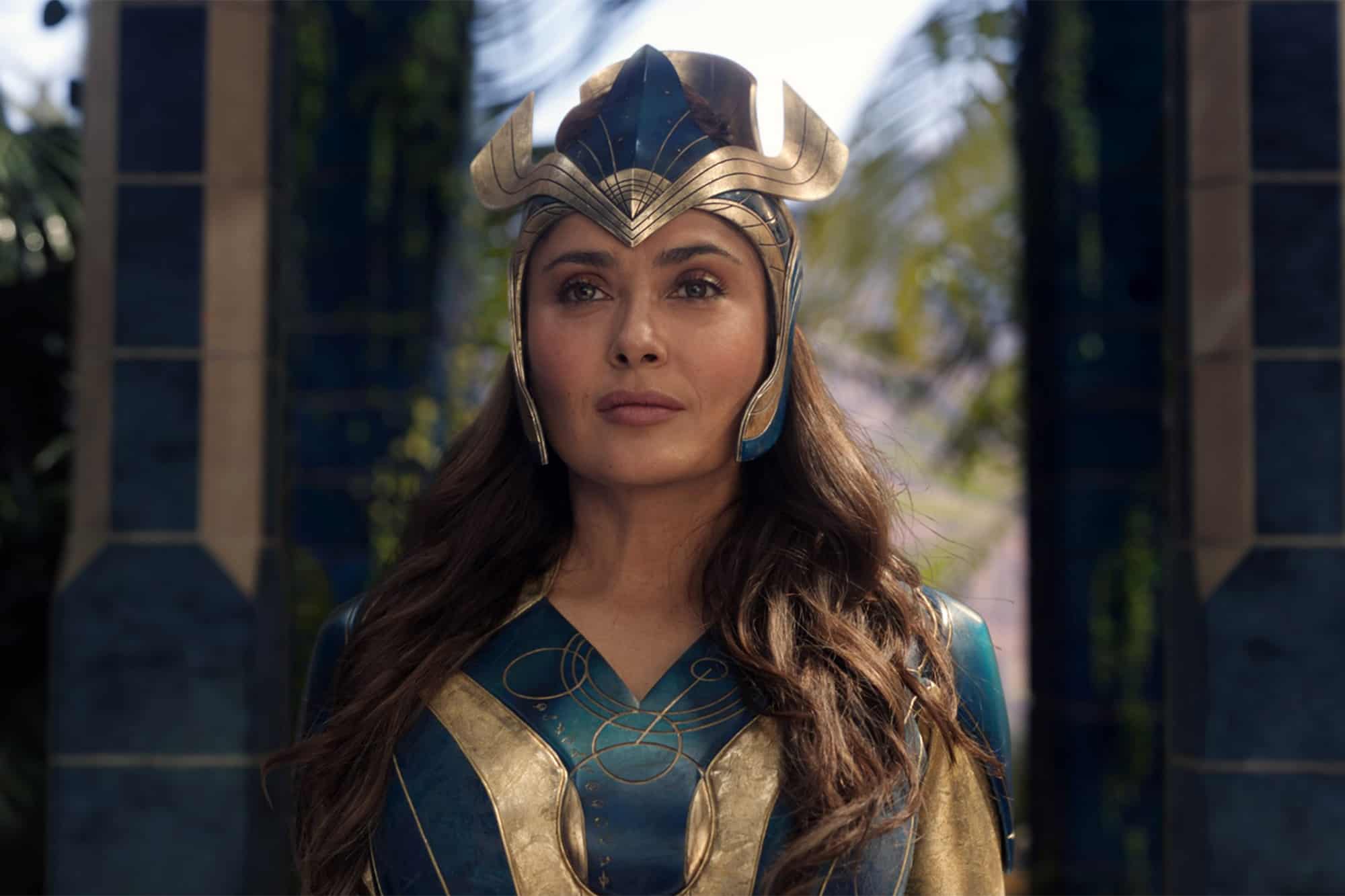 The Bad:  There wasn’t much I didn’t like about the movie, but it is very long, and I had forgotten what it was like to not be able to pause a movie to use the restroom, or that I needed to turn my phone off (which of course alarmed during the movie, and I couldn’t get it to shut off).  Besides the length of the film, the only real thing that stood out to me, was in the beginning, the flow of the movie was a bit rocky.  I have a personal thing about a movie’s rhythm, if the heart beat of a film isn’t smooth, it can throw everything off.  Comic timing, love scenes, chases, are all affected by the very “beat” of a movie, and there was something just slightly off in the beginning.  There was a lot of jumping between modern locations and character exposition through flashbacks and with as large of a team this movie had, there was a lot of ground to cover, and sometimes the dialogue felt a bit forced.  As it progressed, the movie found its rhythm and by the middle, I had forgotten all about the jilted start. 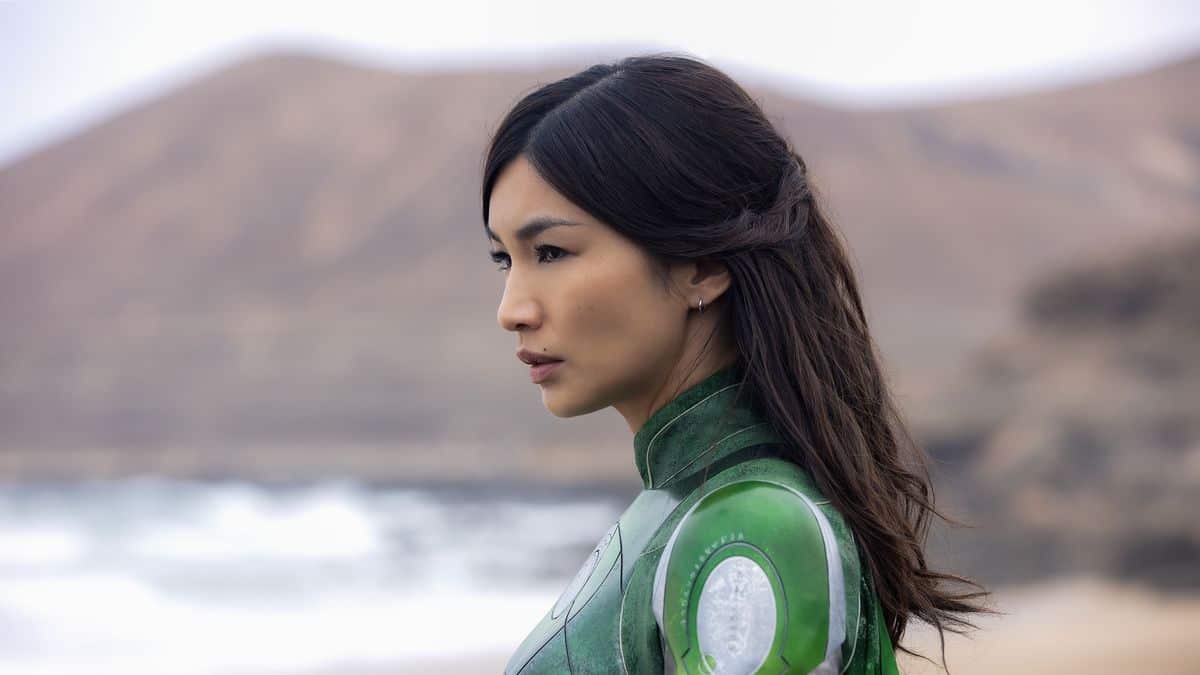 I also realize that this is not going to be everyone’s cup of tea, these are largely unknown characters that the general public know nothing about.  It also doesn’t have the comic sense that a lot of the more recently Marvel movies had.  There are some great comedic moments and both Kumail and Brian Tyree added some much needed levity.  I cannot speak for everyone and I respect that this is not going to be most peoples favorite movie, I can only say that I really enjoyed it.  There was something strikingly more human in these non-human characters.

I really liked this movie.  It had a lot of heart and soul and visually beautiful.  It touched me in a way that gave me hope back in humanity, with all our faults.

Eternals: The Most Human of Gods