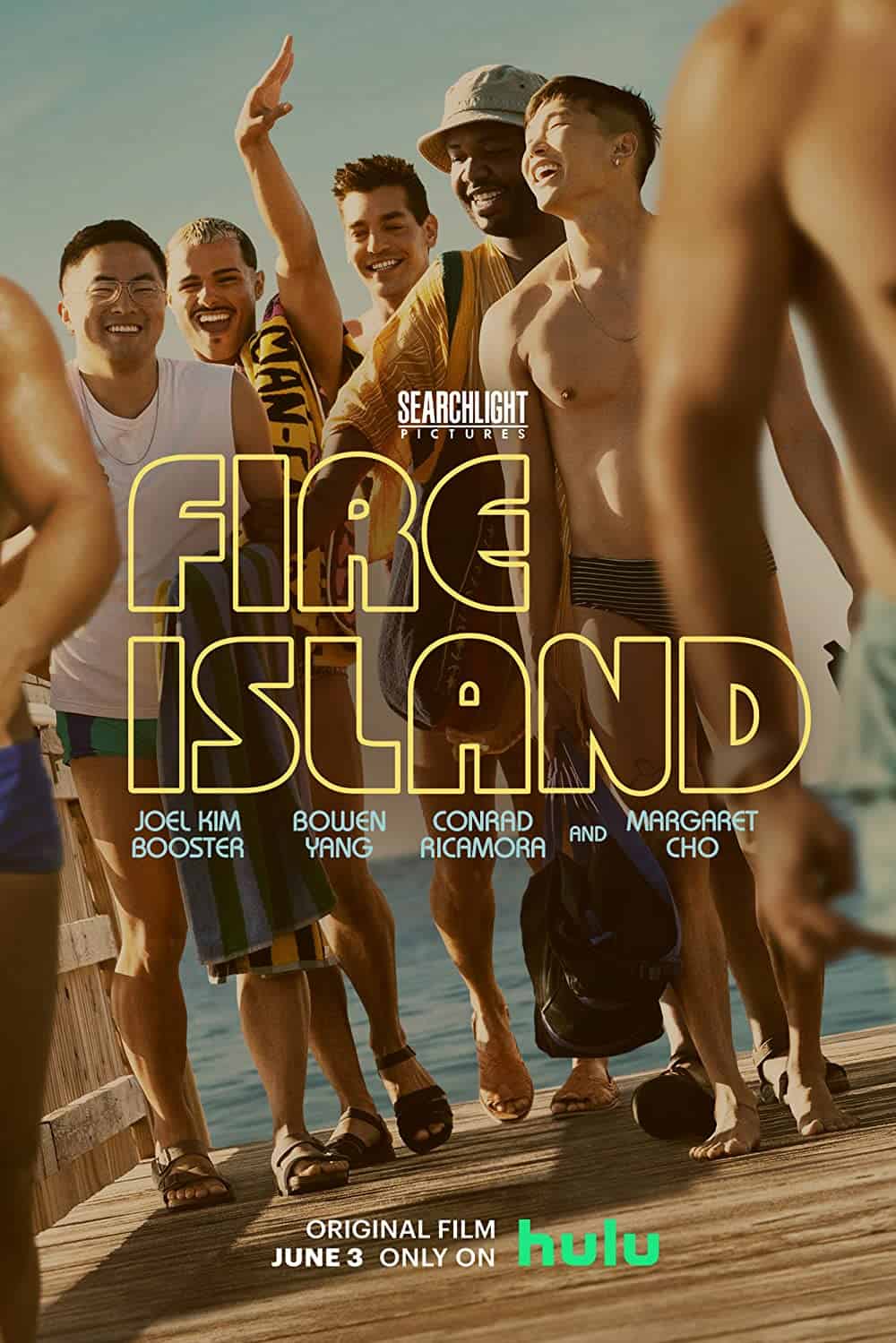 A group of gay friends look for love on Fire Island during a week long vacation.

Fire Island is off the coast of Long Island and part of New York State.  On the island, the areas of Cherry Grove and Fire Island Pines are known as a gay village and during the summer months sports a lively party atmosphere.  It is an unusual setting for an adaption of Jane Austin’s Pride and Prejudice.  Unless it is a gay, rom-com version of Jane Austin’s Pride and Prejudice, then it is the perfect location.  Noah (Joel Kim Booster) afraid of being hurt has resolved himself to a life of one-night stands and never being in love. Best friend Howie (Bowen Yang) has never been in relationship and is looking for that vital connection.  While on their traditional week vacation on Fire Island with a group he thinks of as family, Howie meets Charlie (James Scully) and his friends, Will (Conrad Ricamora) and Cooper (Nick Adams).  Noah’s group is poor and a bit over the top, while Noah and his group are rich and more reserved. Charlie is really into Howie, but his friends are judgmental and look down on Howie’s gay family.  Will and Noah are attracted to each other, but Noah overhears Will putting him and his friends down both for their looks and social status. Enter new suitors.  First the gorgeous and fun loving Dex (Zane Phillips) comes into the picture and is interested in Noah. Then Charlies ex-boyfriend, Rhys (Michael Graceffa) comes back, after cooper called him in an effort to split Charlie and Howie.  As the story unfolds love, acceptance and forgiveness abound and true feelings are divulged. 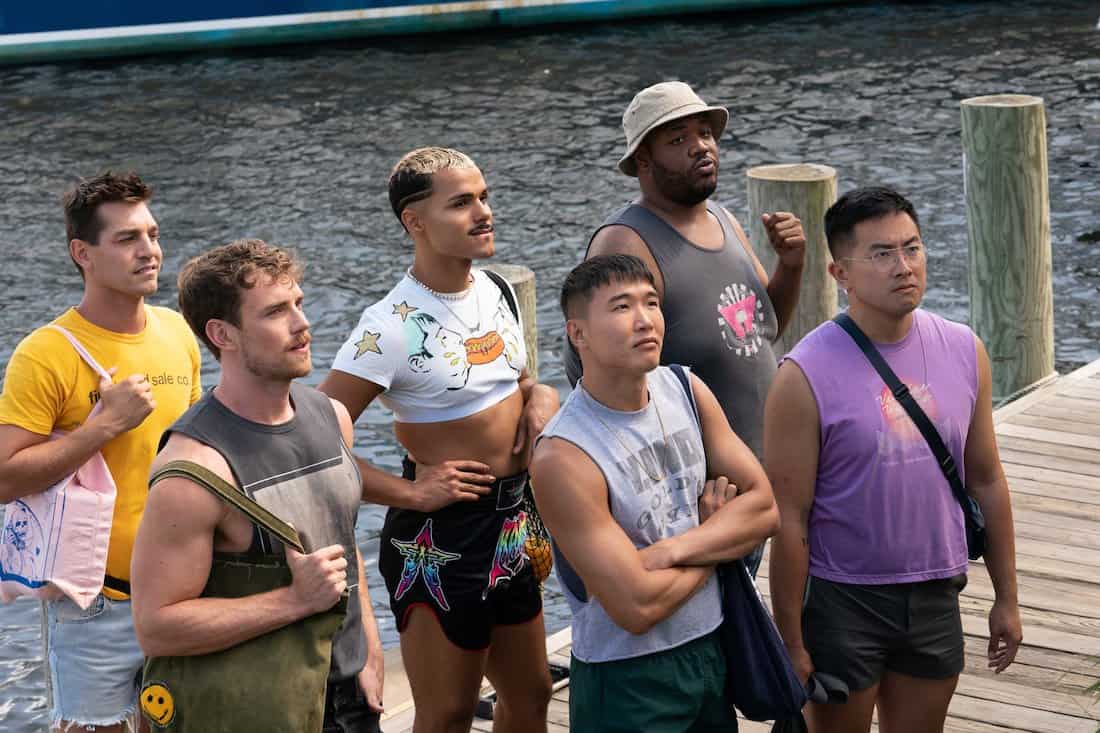 I don’t do romantic comedies too often, not my particular genre, but every once in a while, they are fun.  I was a little surprised at how good this one was.   I was expecting a less plot driven, campy, overly sexualized story with two dimensional characters.  What I got was a well thought out, witty comedy, with some pretty complicated characters that hit on some pretty heavy themes that particularly plague the gay community. Racism, classism, body dysmorphia, along with body shaming are all covered.  The performances are all very well done.  The leads do a great job and creating multiple layers and dimensions to their characters and the supporting cast does a great job adding humor and context.  Noah’s group at first seem a bit too “stereotypical” gay, but then I realized this was to show the contrast to Will and Charlie’s group and to heighten the class differential.  The story flows well and the plot is interesting especially for an adaption of a Jane Austin classic.  Normally I like original music to be used in movies, but this is the type of film where pre-recorded songs fit in quite well. 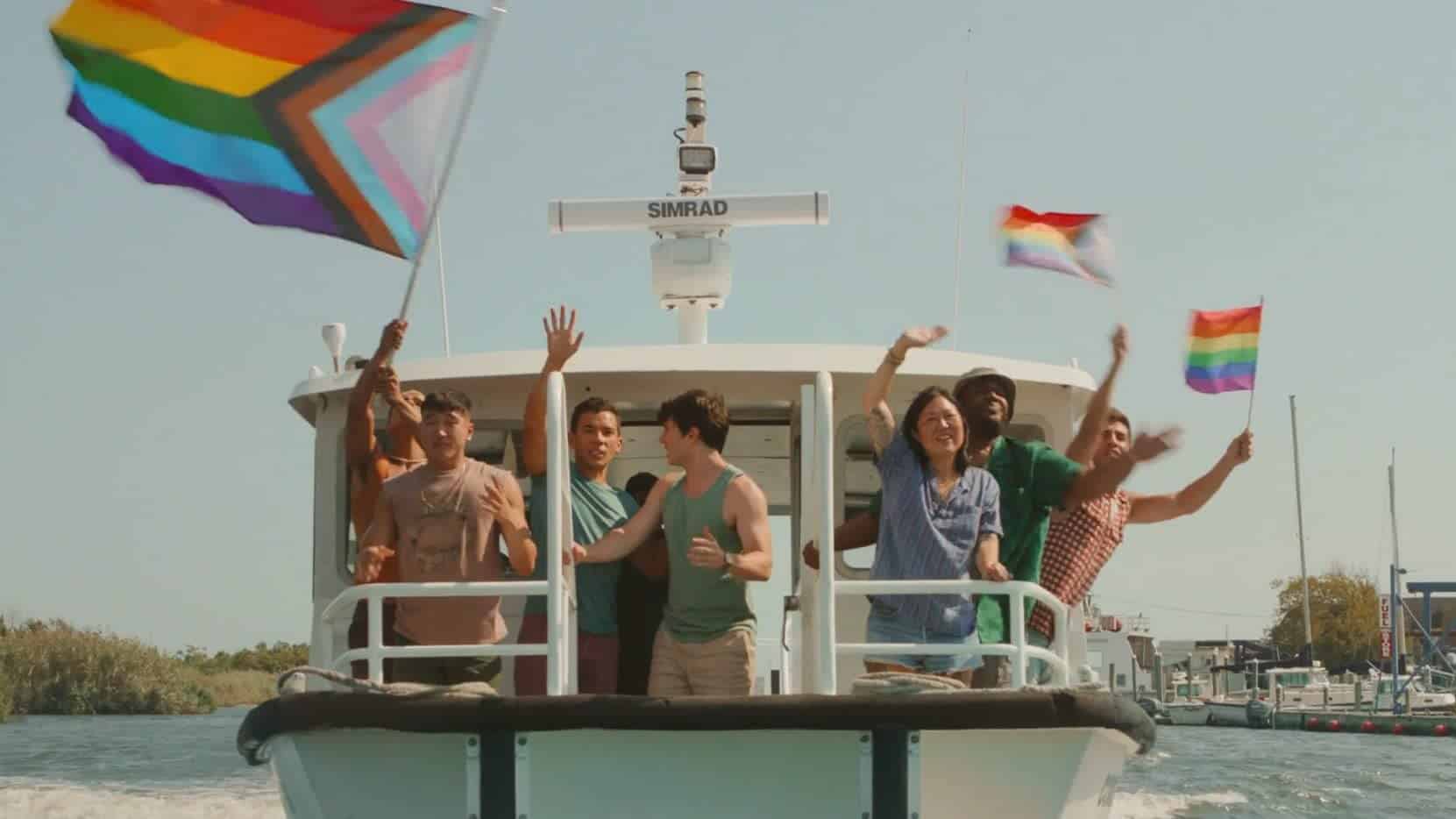 The movie, written by star Joel Kim Booster, was originally a series that was ordered for production by streaming service Quibi.  The working title was Trip and was a fictionalized version of Booster and Yang’s real-life friendship.  But the project was put into jeopardy, when Quibi shut down in December of 2020.  Searchlight pictures picked up the script and reformatted it as a feature film calling it Fire Island and it is now available for streaming on Hulu.

Overall, this is a fun, well written and performed movie that hits on some very series themes that plague the gay community.