From Haddonfield With Love…Michael Myers, Halloween, and Why We Can’t Stop Watching!

“I met him, fifteen years ago: I was told there was nothing left; no reason, no conscience, no understanding; and even the most rudimentary sense of life or death, of good or evil, right or wrong. I met this six-year-old child, with this blank, pale, emotionless face, and the blackest eyes…the devil’s eyes. I spent eight years trying to reach him, and then another seven trying to keep him locked up because I realized that what was living behind that boy’s eyes was purely and simply…Evil! – Dr. Samuel Loomis

How do you talk about Michael Myers? Do you talk about him as a young boy…a young man…an adult? Do you talk about the “shape” that you may or may not see lingering on the side of the house across the street? Michael Myers, the character  has many different angles that you can talk about and all of them are more than likely going to have some type of fan fiction, or a blog site that has already hit on those points, but that is the great thing about Michael Myers, he’s not just a character…he’s an obsession. A quick search on the internet would reveal a bounteous return of fan fiction articles, comic books, costumes, and just about anything you would like with Michael’s face on it. These results are the tale of just how deep the character is. Not only is Michael Myers himself a persona that makes for a great conversation on the human psyche, but role players such as Dr. Sam Loomis, Laurie Strode, and Jaime Lloyd and their connection to Michael command attention too.

Michael Myers is terrifying. He’s silent, calculated, and he didn’t care who his next victim was. Michael Myers is only half of the story; the other half is…why? Why did he kill his sister on Halloween in 1963? Why was he hell-bent on killing over and over again? What was the real reason Sam Loomis continued to chase Michael down for all those years? For decades, discussions would be had by households who would continuously watch the movie year after year, and promise they saw something that they’ve never seen before. Regardless of what installment you are watching, you always come back to that one point in time in Haddonfield,1963, upstairs in Judith’s bedroom. There are many facets that make not only the first movie fascinating with many discussion points, but over the years the following movies would demand conversation on their place in the Halloween lore. In order to even begin to explain this fascination with Michael Myers, we must start with the John Carpenter classic of 78.

The father of modern horror slasher films, Halloween tells a tale of a six-year-old boy who kills his sister on Halloween night. Now, the plot itself is not all that original, but the story works and is highly believable and real. The brilliant camera angle leading from Michael’s mask only adds to the disturbing vibe being set when he grabs for the knife on the counter and heads upstairs. The soundtrack during the scene leading up to his parents meeting him on the front lawn is easily some of the extremely well-timed executions in the genre. The next scene in the movie takes place fifteen years later and would add another level of depth by introducing two characters that would forever be cemented in the genre…Dr. Sam Loomis (Donald Pleasence) and Laurie Strode (Jaime Lee Curtis).

The story of Dr. Loomis and Michael is one I’ve always compared to Batman and Joker. They need each other to survive, they chase each other for the love of the hunt. Even though he’s not the main character, his actions and passion to keep Michael from killing is almost a reason in itself to watch the movies. Some of my favorite Loomis moments come when he’s face to face with this evil. In Halloween 4: The Return of Michael Myers, the scene in the gas station, where the camera pans over Loomis’ shoulder and you see Michael Myers, and Loomis just stands ever so still and simply says “Michael”? Loomis turns to Michael and asks him not to go back to Haddonfield. His voice with hints of sincerity and madness, he knows where Michel is headed. Another marvelous Loomis scene in Halloween 5: The Revenge of Michael Myers, in the end, guess what we see. That same familiar camera angle, with the same disturbing vibe. Only this time, behind the mask, is Jaime Lloyd…Michael’s niece. Hearing Loomis yell at the top of his voice with so much hate, fear, and madness NO, NO, NO. You feel for the doctor, you feel his pain, you feel his tiredness, his willingness to do what he must do to contain this evil. He can’t and hasn’t, but if you ask me, I’m not so sure he wants to. Now I’m not saying Dr. Loomis wants Michael to kill, my angle is he’s spent so much time with Michael that he can’t let him go. 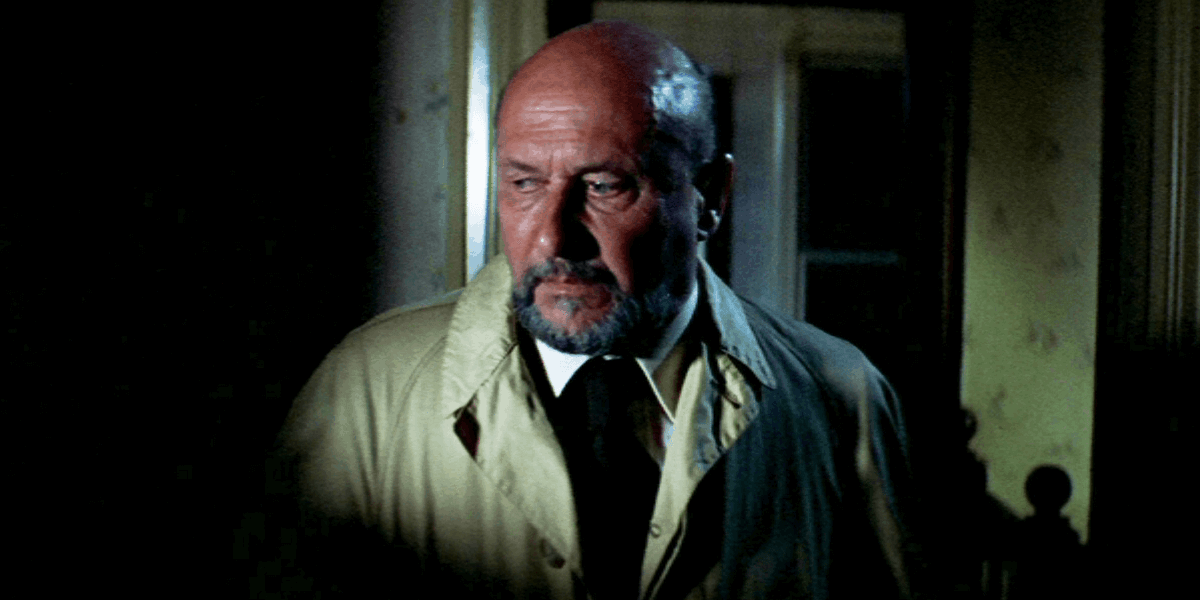 Now, I want to get back on track and talk about what keeps Michael such a popular draw after all these years. What is it that makes people thirst for Halloween and Michael Myers? Simple…fear. These days, a good psychological thriller is hard to come by. Horror movies have been updated to mean tons of blood, body parts, and a side of gratuitous misplaced gore. Even as the years and movies went on, they kept a psychological edge. Jaime lying in bed, lighting crashing everywhere…the closet door opens. She gets up and closes the door and lays back down. Lighting crashes and Michael sits up on the side of her bed. How many times do we see Michael stop and admire his work with what is his unofficial trademark “head tilt”. Every time you see a window or the edge of a house, you’re asking yourself…do I see him? This is what keeps us coming back to Michael Myers. Regardless of your thoughts on the series as a whole, one thing is for sure…Halloween is and will always be the reason we have modern horror movies.

From Haddonfield With Love…Michael Myers, Halloween, and Why We Can’t Stop Watching!