With the spooky season upon us, this month’s theme for live performance genre productions, I thought a another look at horror on stage, specifically Broadway style musicals based off of dark comedy horror films.  In this article, we will take a look at Little Shop of Horrors, Heathers, and Beetlejuice.

Little Shop of Horrors (1982): This high energy musical is based off of a 1960 Roger Corman horror / dark comedy film which had a guest appearance of the then, unknown Jack Nicholson.  The stage production makes some notable changes to the plot, omitting some characters and fleshing out others, but the basic plot remans the same.  Seymour Krelborn works at a flower shop and is in love with his coworker Audrey.  With no money and no real future, Seymour doesn’t even attempt to court her.  But when he discovers a strange and unusual plant his luck changes and he begins to become rich and famous.  The problem is the plant survives on human blood and Seymour must decide if a life of murder is worth fame, money, and love. 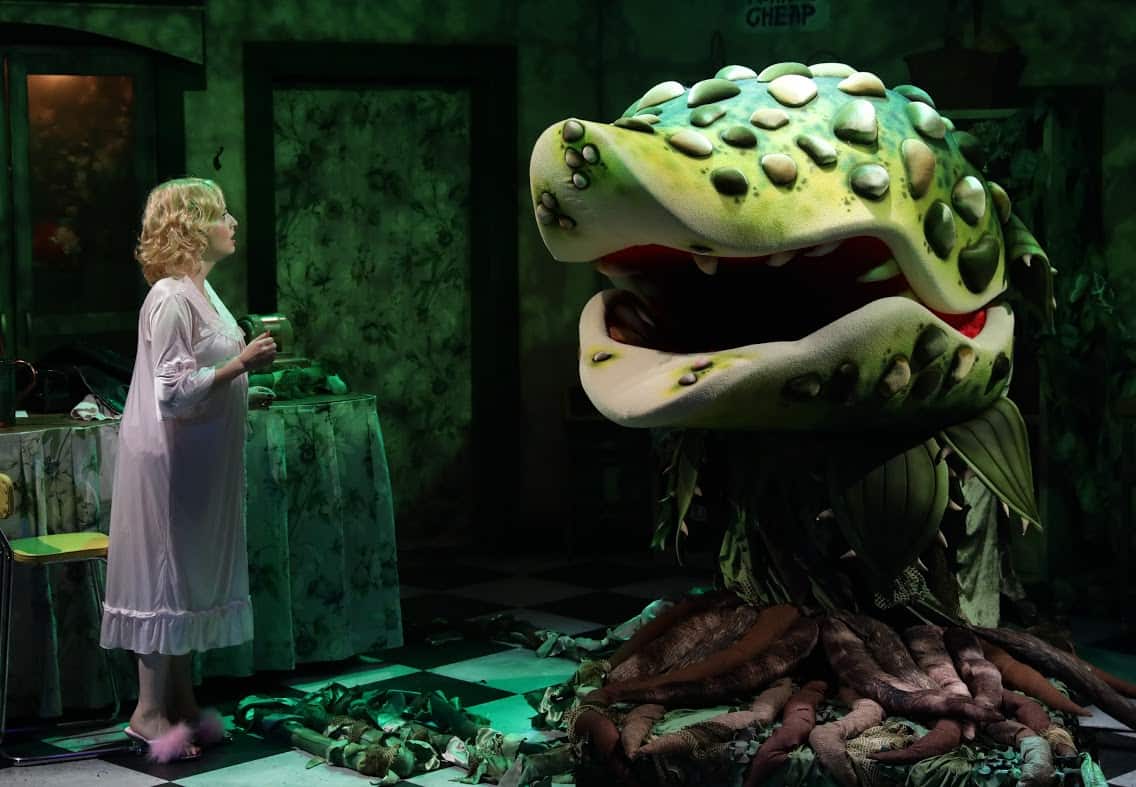 The show has become a go to for high schools and community theatres as well as professional stage companies.  The pacing and humor are fast and witty and the 1960s themed music is catchy, with a great mixture of high energy dance numbers and ballads.  The story, a portrayal of class struggles, and moral values and the pitfalls of greed and capitalism mixed in with a monstrous killer plant that sings, is an audience pleaser. The show (Cast and Music) has been nominated and / or won more awards over the years than can be listed. The music is by Alan Menken and Howard Ashman, who would later become Disney’s go to composers and Lyricist on such movies as The Little Mermaid (1989), Beauty and the Beast (1991) and Aladdin (1992).  Ashman would die in 1991 of AIDS having never seen the finished production of Beauty and the Beast, but three songs that he worked on for Aladdin, which was released a year after his death made it into the finished product. Menken would go on to work with Disney on Pocahontas, The Hunchback of Notre Dame and Hercules, as well as many non-Disney projects including the song “Star Spangled Man” in MCU’s Captain America: The First Avenger.

A feature film of the musical was produced in 1986 and a remake is in the planning stages. I am a huge fan of Menken and Ashman’s work and love this show.  I have had the pleasure of seeing it several times and each one is a joy! Below is a song from the show when it returned to Broadway and is seen here being performed on The View.

Heathers (2013): This musical is based off a 1989 film of the same name.  Although minor changes were made to for the staging, the plot to both remain pretty much the same.  Veronica Sawyer becomes part of the “In” crowd when the three girls who run everything at their school, all of which have the first name of Heather, become her friend.  This ostracizes her from her old, less popular friends.  When she finally decides to forgo popularity for her own moral beliefs, she becomes a target of the girls.  With help from her brooding “bad boy” boyfriend, J.D., she plans to apologize to the queen bee Heather, but she accidentally poisons her.  This causes a chain of events with J.D. that spirals out of control with a few more murders and a couple suicide attempts. 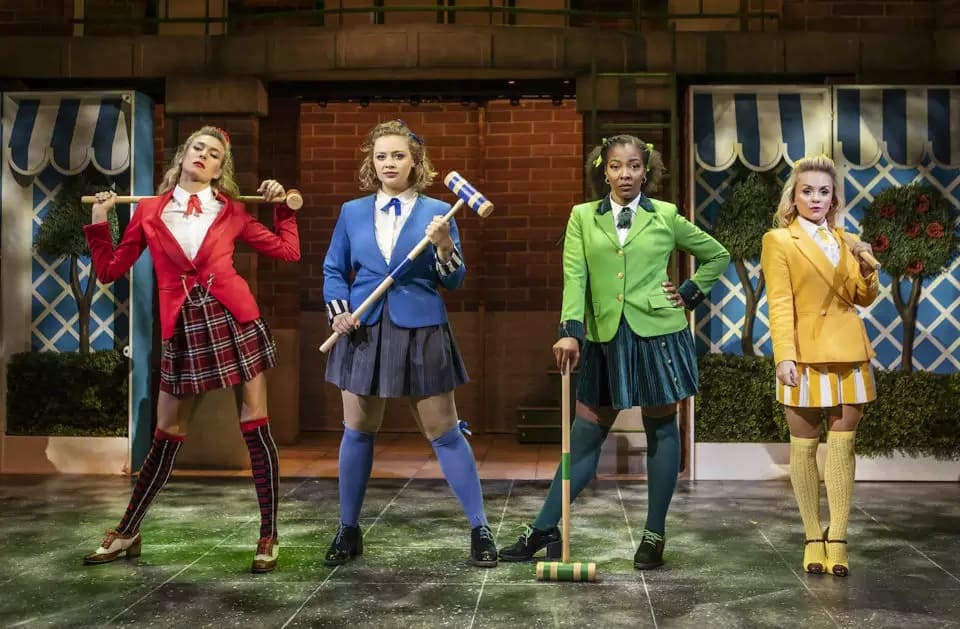 The show was not as critically acclaimed as Little Shop, with some very harsh mixed reviews.  Partially because the movie it is based on is considered a cult classic and the musical dumbs down some of the darker themes.  There is a 2022 filmed version of a stage production which I have seen, and really enjoyed it.  It is a bit of a farcical look at the movie, but I enjoyed the music and the lyrics and there were some good performances.  It is still a dark comedy, with some heavy themes and there is still a lesson to be learnt about the need for acceptance and fitting in, bullying and teen suicide, and all though these are all handled comically the weight of these themes is still present.  Even with the mixed reviews, the show, which has not made a Broadway debut yet, has been nominated for a few Drama Desk Awards and won the “WhatsOnStage Awards” for Best New Musical. 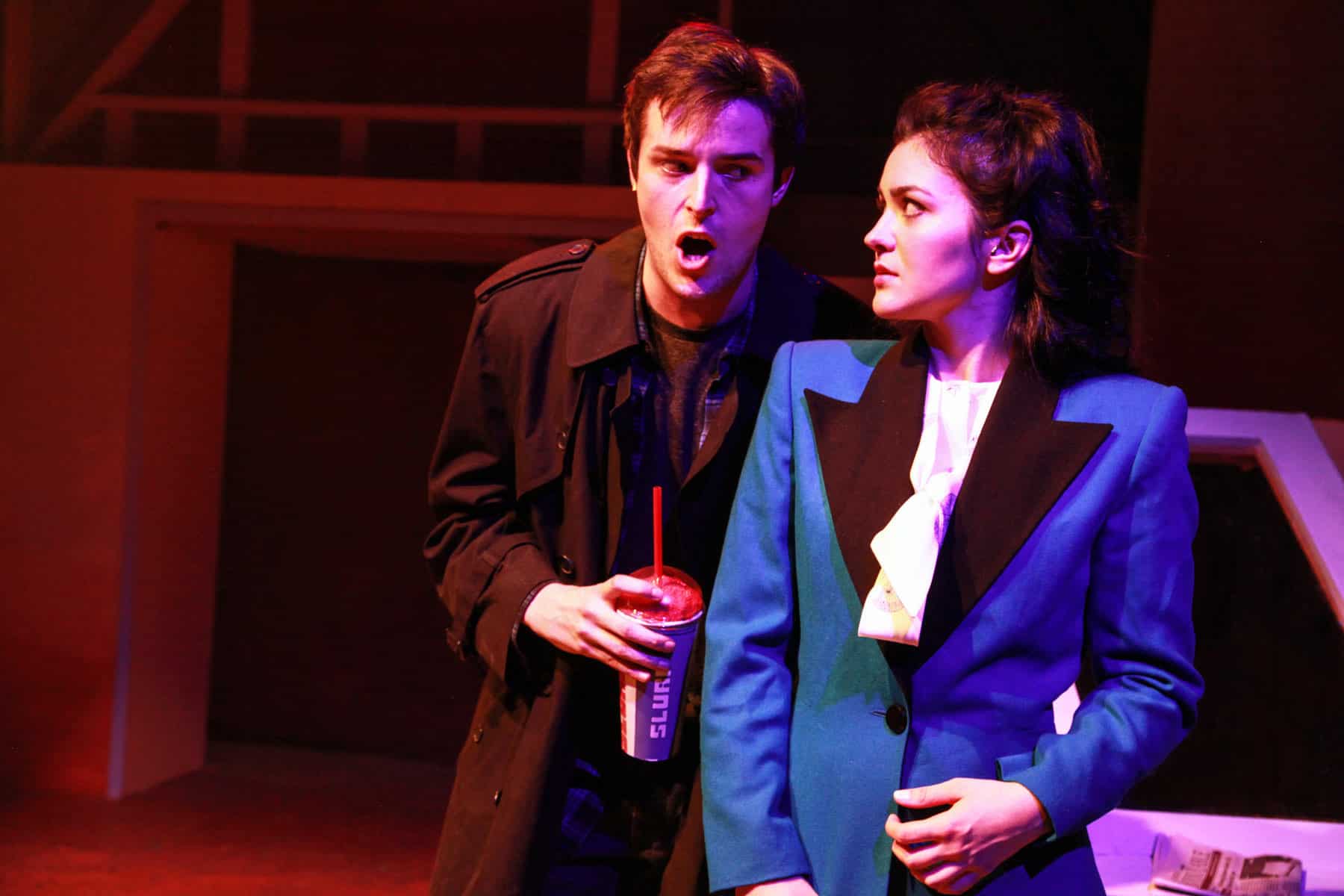 The music is composed by Laurence O’Keefe, who composed one of my all-time favorite Broadway shows, which is also based off of a movie, Legally Blonde: The Musical, which I believe to be a far superior show. The music in Heathers is very reminiscent in style to Legally Blonde but isn’t quite as strong and is one of the criticism many reviewers had about the show.  The music should have been a bit more based in the 80s since both the feature film and the stage production are set in that time period. The lyrics, which are exceptional, both smart and witty, are from Kevin Murphy, who wrote the book for another of my favorites, Reefer Madness, a show I will be covering in an upcoming article.

Beetlejuice (2018): Probably the best-known movie of the three reviewed in this article, I am actually surprised it took thirty years for a musical to be written as the movie was a hit in 1988.  Unfortunately, this is the only one of the three being reviewed I have not seen, but from what I can tell, like the other productions reviewed, the plot was altered to fit on a stage.  Ghost Beetlejuice works with newly deceased couple Adam and Barbara Maitland, to try to scare new residents of their old farmhouse into leaving.  Young Lydia is the only one of the living occupants that can see the three of them, and Beetlejuice tries to trick her into saying his name 3 times, which would allow him to be seen by all the living people.  Lydia is dealing with her own mother’s passing and her father’s engagement to Delia.  The good hearted Maitlands try to help her cope while Beetlejuice continues his antics.  Leading to a showdown between the living and the dead. 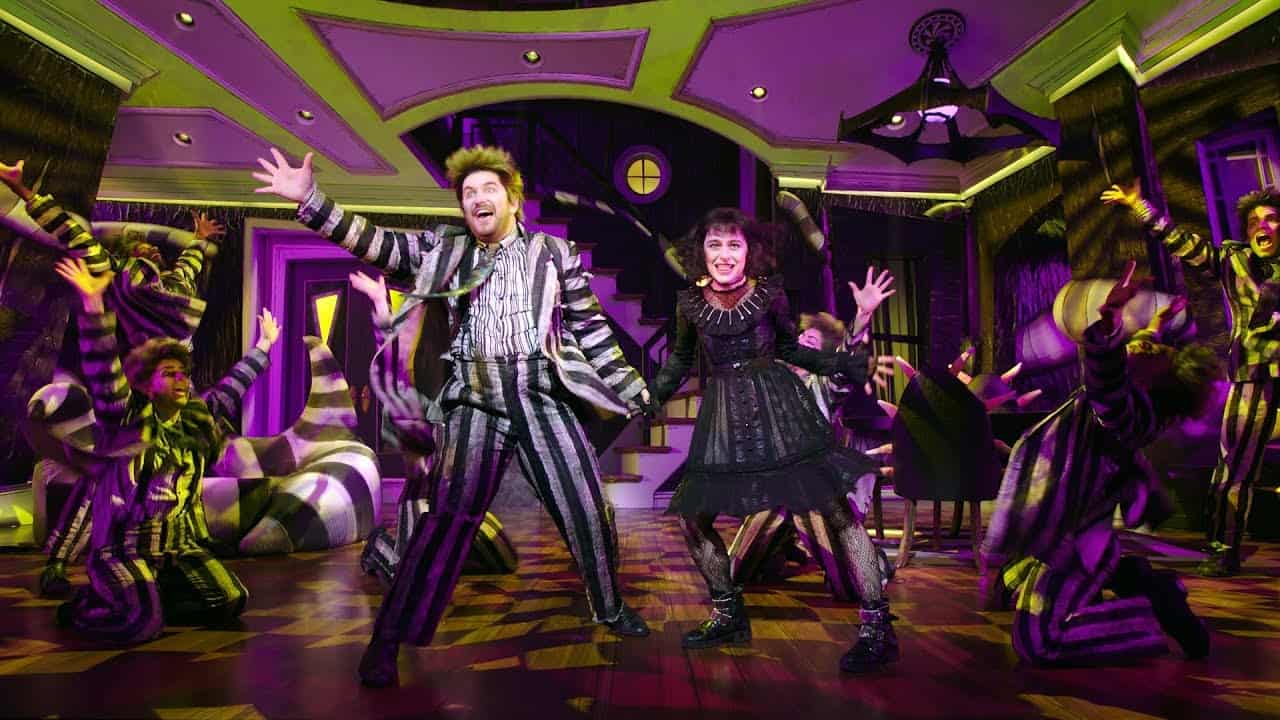 The show had a pre-Broadway opening in Washington D.C. in 2018 and then moved to Broadway in 2019, but unfortunately closed due to the Covid-19 pandemic.  Reopening in 2022.  It received mainly good reviews commenting on the shows fun nature and extensive sets, but did have some complaints about the hyperactivity of the storytelling, with the show being overstuffed with gags, one-liners, visual diversions that you risk the audience shutting down from sensory overload. 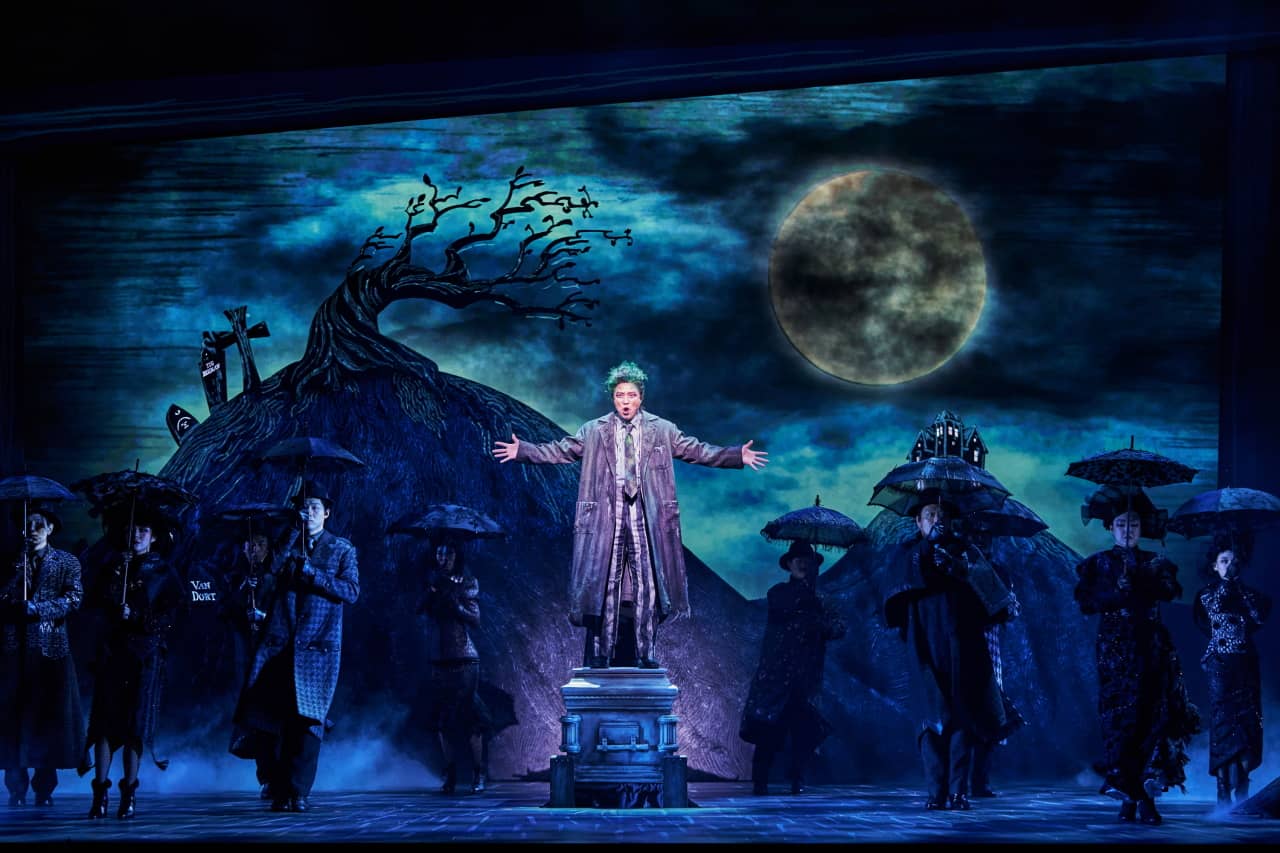 The show did garner several Tony award nominations including Alex Brightman for Best Actor in a Leading Role as Beetlejuice.  It also won the Outer Critics Circle Award for Outstanding Set Design along with a few other awards. The original Broadway Cast recording is available from Ghostlight Records, and you can see the opening number on YouTube from when the show reopened in 2022.