Nightmare Alley: The Art of the Con 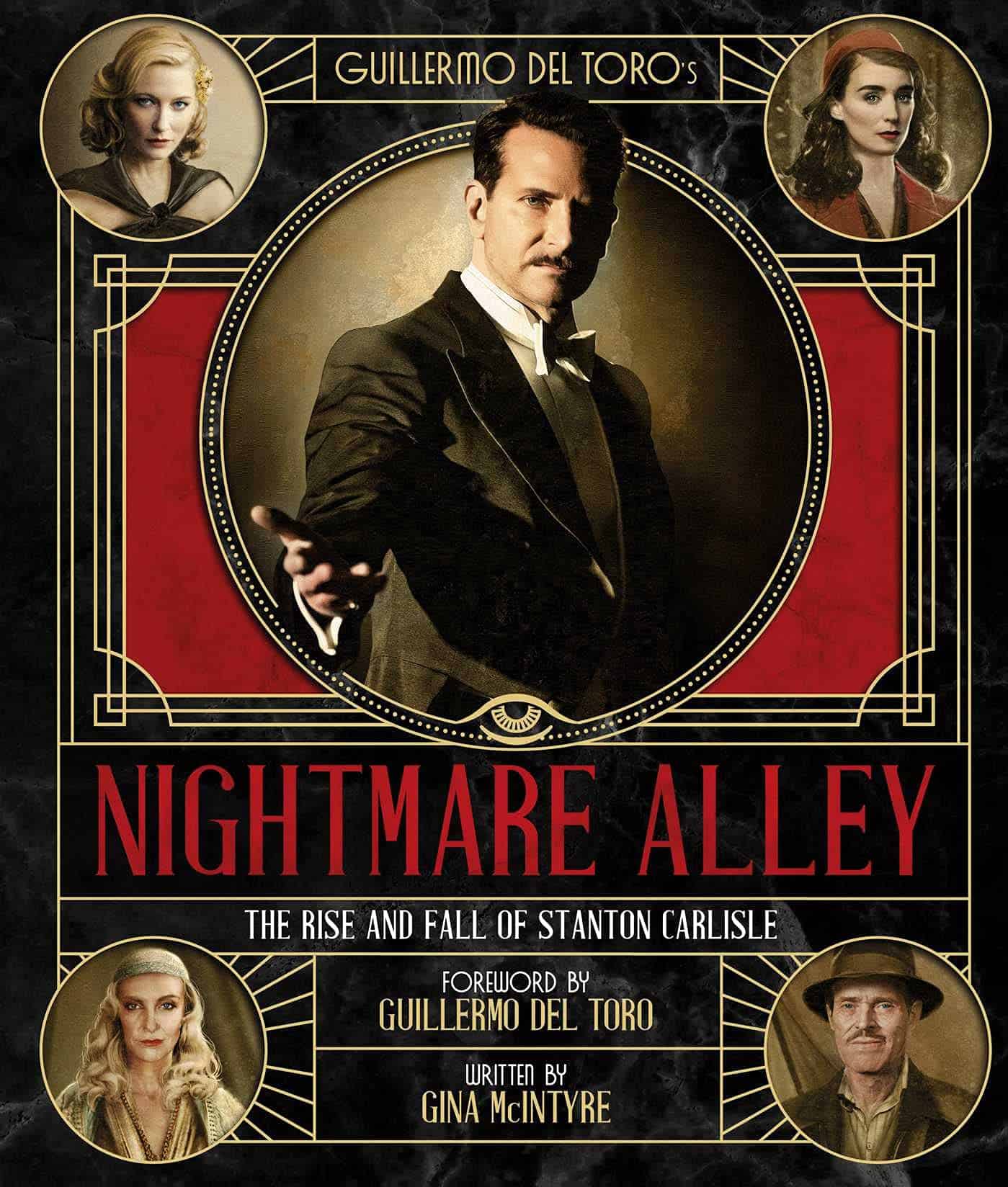 In the 1940s, a carnival mentalist falls in love and becomes successful, but his rise also comes with his ultimate fall.

Have you ever watched a film expecting something completely different based on what you saw in the trailer, who the director is, or the title of the movie? This is what happened to me with the remake of the 1947 classic noir film, Nightmare Alley.  With a trailer depicting a girl having volts of electricity flowing through her, a title with the word “Nightmare” in it and directed by genre favorite, del Toro, I was expecting wonderful monsters and a more fantasy-based story.  Knowing nothing but the title of the original, what I got, was a psychological thriller not in the horror or sci-fi category at all, but a pulp film noir.  I debated on whether to write the review, as this does not fit in under the normal Comic-Watch purview.  But the editors decided, that with our recent 1940s “films through the decades” articles, Guillermo del Toro being a well-known name in the fantasy genre, and the fact that it was adapted into a graphic novel in 2003, we would make the exception.  This review will cover both the original movie and the remake. 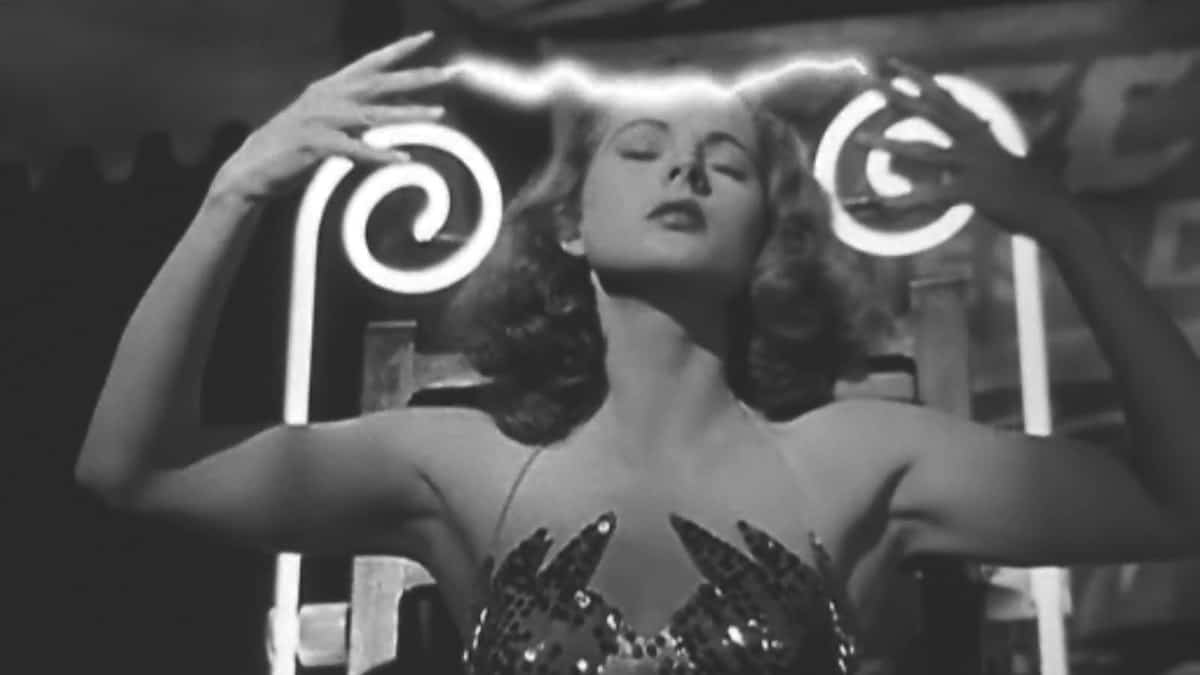 Having read the novel by Lindsay Gresham written in 1946, Tyrone Power begged 20th Century Fox’s studio chief Darryl F. Zanuck to buy the rights to the book so that Power could escape his romantic swashbuckling image he was famous for.  The script was written by Jules Furthman with Gresham consulting.  Although considered a classic now, and one of Power’s best performances, it was a box office flop.  The public did not want to see Tyrone Powers as anything but a romantic hero.  And Stanton Carlisle, the films lead, is no hero.

Many sequels, especially when made 75 years apart, drastically alter the plot or the story to relate it more to the present-day audience, but I am happy to say, that did not happen here.  Where the 2021 film did add more to Stan’s back story and made some of his actions a bit more ambiguous, the story and plot remained very much intact.  Both films boast star studded casts and amazing performance, and both use the classic film noir style, playing with light and shadow, highlighting the two sides to the human soul. 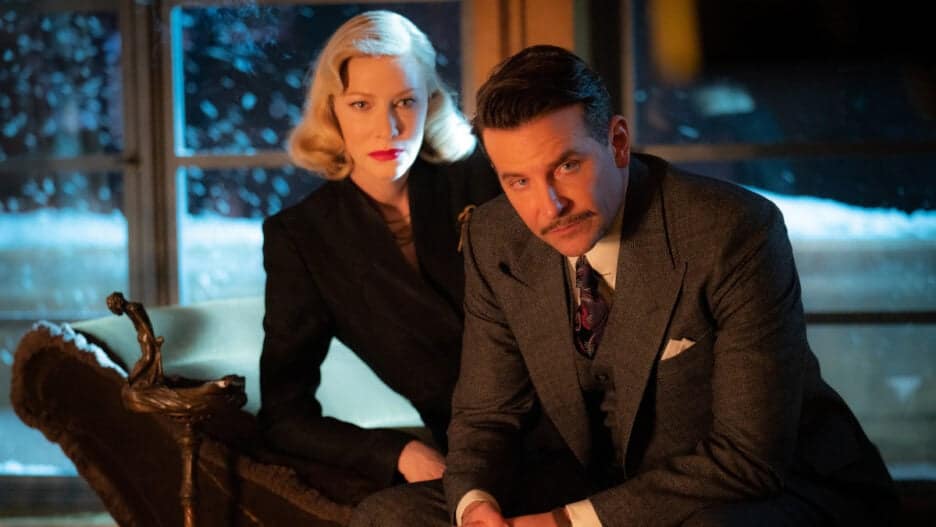 Stanton “Stan” Carlisle (Tyron Power / Bradley Cooper) finds a job as a carney.  He is intrigued by the sideshow attraction of the geek. The true meaning of the term is a performer who bites the heads off of chickens and is considered the lowest profession one could stoop to. He asks if a “geek” is born and is told that they are made and is told how a desperate man can fall so far to become something less than human.  After befriending a couple, Zeena (Joan Blondell / Toni Collette) and Pete (Ian Keith / David Strathairn) who have a mentalist act using a secret and elaborate vocal code giving the appearance of being psychic.  When Pete dies of alcohol poisoning by accidentally drinking a bottle of “wood alcohol” secretly given to him by Stan,  Stan steps in for Pete and finds his true calling as a con-man mentalist.  Having fallen in love with Molly Cahill (Coleen Gray / Rooney Mara) the couple leave the carnival to make their fortune out in the real world.  Years later, their act is a big success and when Dr. Lilith Ritter (Helen Walker / Cate Blanchett), a true femme fatale, comes to his show, Stan seizes the chance to make some real money, by preying on the powerful and wealthy society members grief and loss and becomes a well-known spiritualist and convinces people he can talk to their deceased loved ones. This ultimately leads to Stan and Molly’s break up and Stan’s downward spiral from the top to rock bottom. 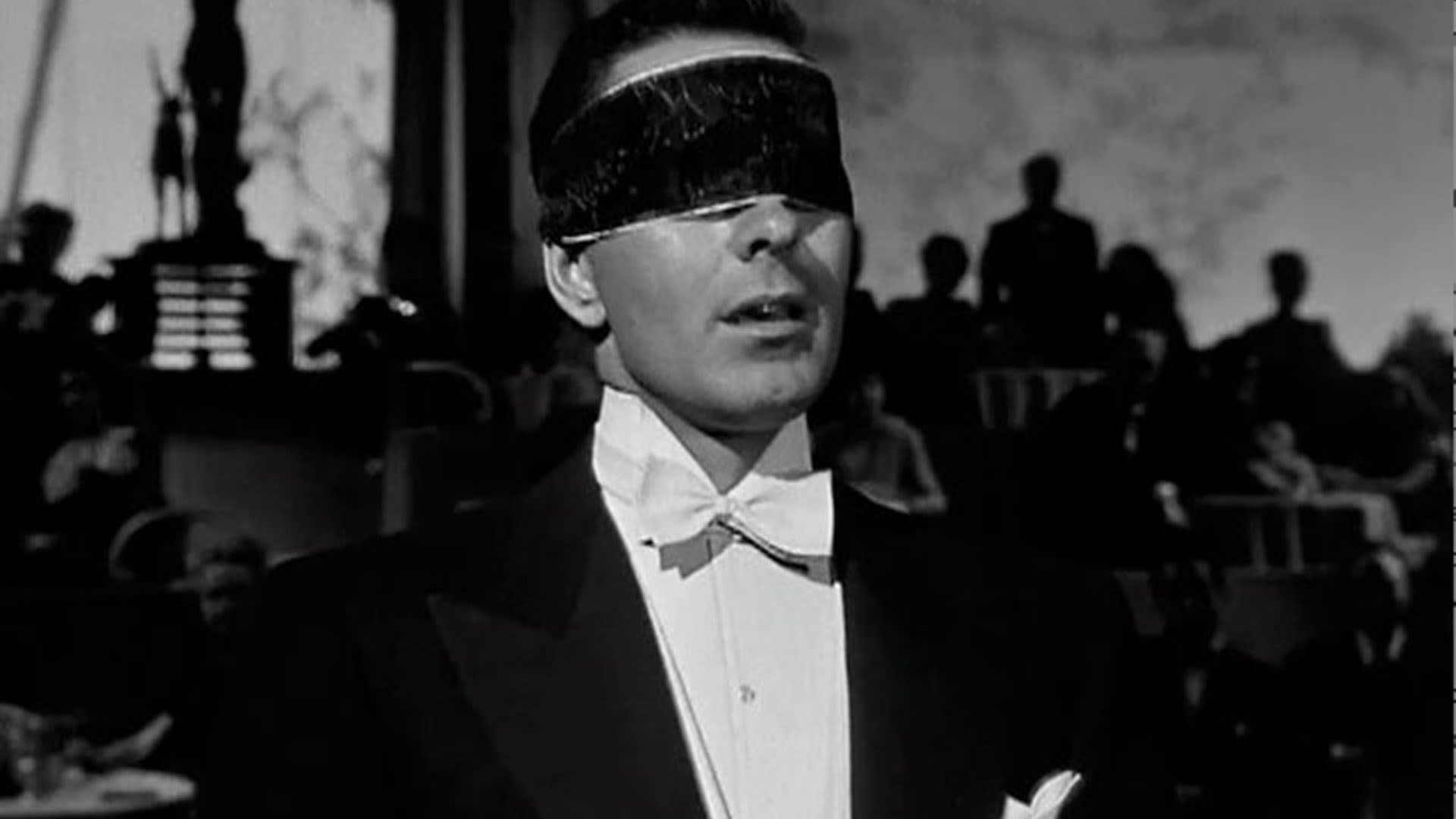 Both films are beautifully made with gorgeous imagery and stunning visuals.  The music in both emphasizes the dark and gritty tone and accentuates the action. The actor performances are amazing with Tyrone and Bradly exuding a type of sleek charisma and likability that gives the audience no doubt that they could charm the pants off of anyone.

The real difference between the two movies, to me at least, is the script.  The 2021 film added a lot of character development not found in the original.  Stan has a dark past that is barely touched on in 1947 but is explored in much more detail in the remake.  There is a bit more ambiguity over Stan’s motivation and actions as well.  Did he purposely give the wrong bottle to Pete? Or was that all part of the plan to get “the code book”?  And it is made clear what he did to his father.  There is also more to Lilith in the 2021 version, and it left me wondering what her real plan was.  Is it greed? Or was she a victim of Ezra Grindle and out for a type of revenge?  It makes you ask the question, who is the real con and who is the mark?  The original, was less ambiguous, with the motives of both being much clearer.  The final ending remains the same in both movies remaining faithful to the novel, but the 1947 film added a scene at the studios command to lighten the bleak ending, even if just a little bit giving the audience a bit of hope about Stan’s future, but still alluding that he will end up like Pete. 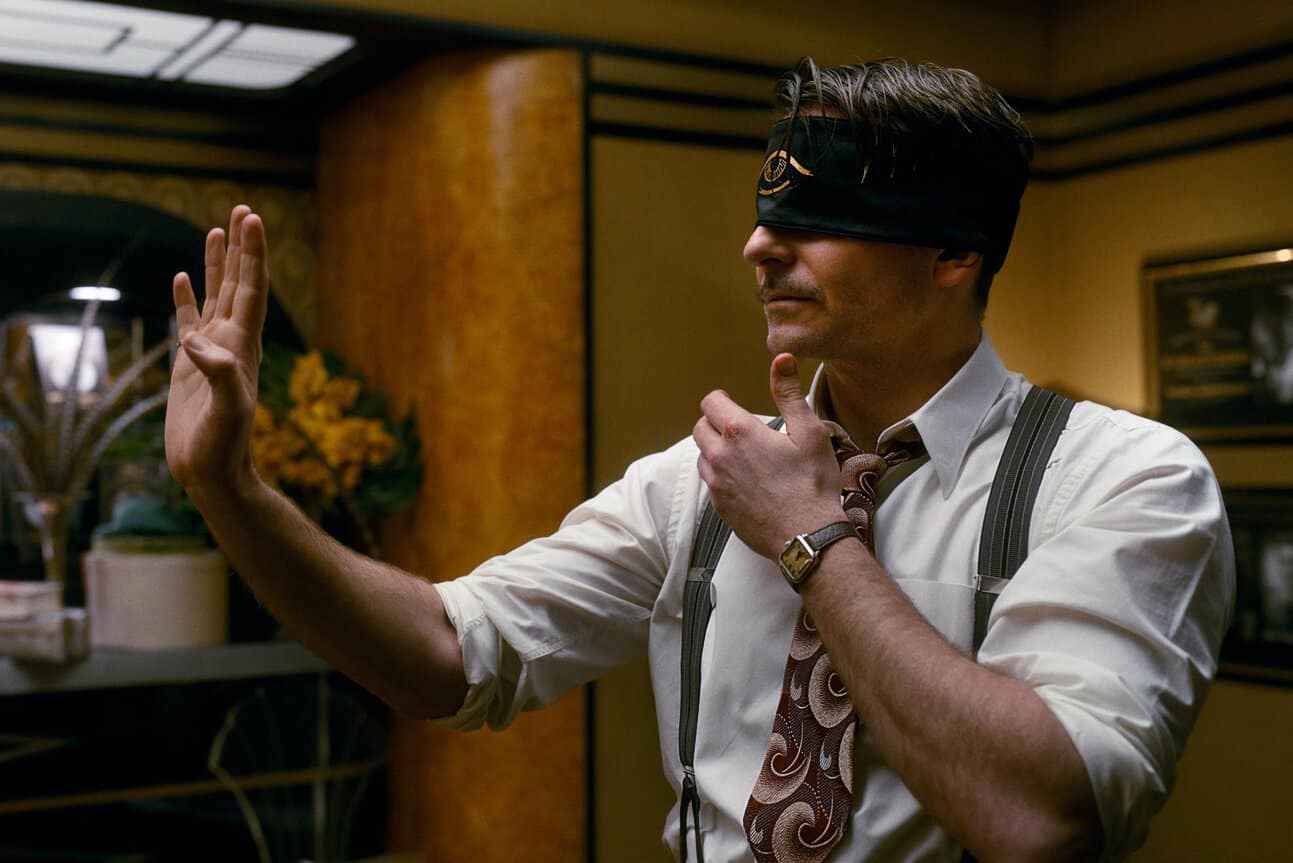 The Novel’s author’s life sadly would mirror his character’s rise and fall.  After his first marriage failed and he became an alcoholic, he began searching for the spirituality that would give him hope in the human race, but he never found it.  He took his own life by overdosing on sleeping pills in 1962, in the same hotel room that he wrote the first draft of Nightmare Alley in.

As a fan of film noir, I am pleased that del Toro made a movie that kept the same tone and overall feel of the original, adding only elements that help to create more three dimensional characters.  I enjoyed watching both versions of the film, and both were incredibly well done but neither being a financial success.  It will be interesting to see if the remake will be thought of as a classic in 75 years.

Nightmare Alley: The Art of the Con