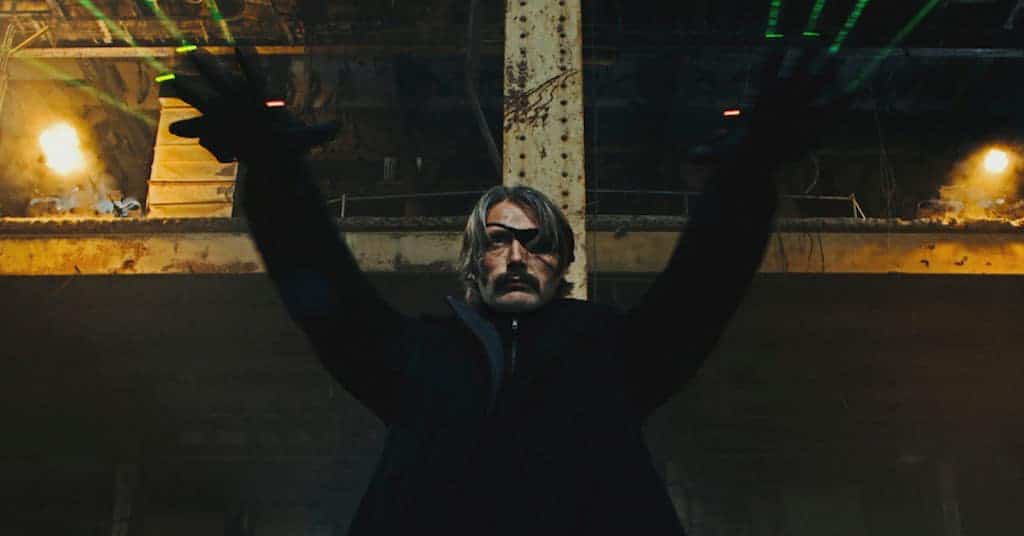 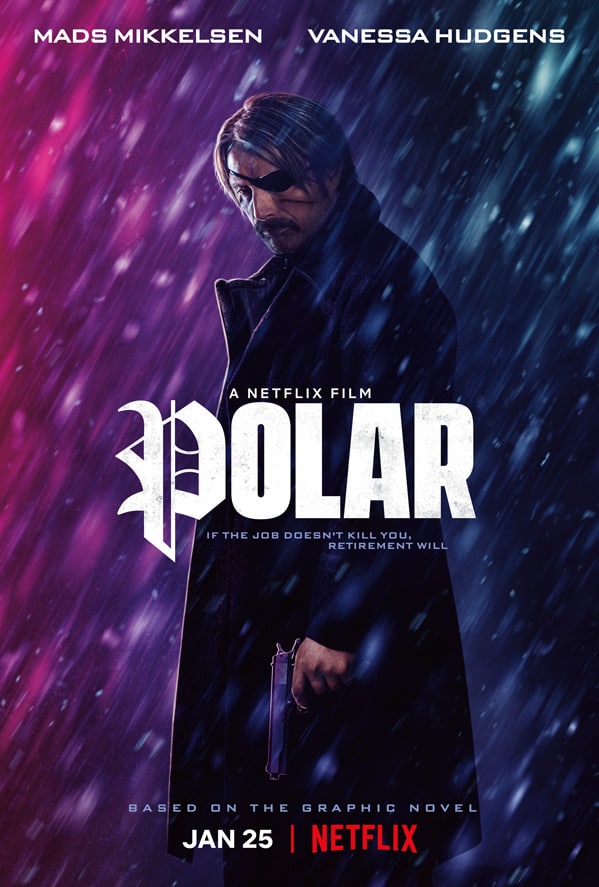 Netflix’s Polar opens with bright colors, gun sounds, and “September” by Earth, Wind, and Fire. Directed by Jonas Åkerlund (a Swedish director whose IMDb page reads like a pop-rock hall of fame catalogue) and adapted for the screen by Jayson Rothwell (a guy who wrote a 2012 film called Silent Night about a killer Santa), Polar wastes no time establishing itself as a high-energy, high-contrast movie about blood and fun. The Edgar Wright-esque quick cuts peppered through the first five minutes send a distinct message: Polar will try to grab your attention and hold tight.

Mads Mikkelsen plays Duncan, AKA “The Black Kaiser,” an aging assassin who is close to retirement. He is a talented, disciplined, mustachioed, rugged antihero who wants to start a new life in a small town. He rents an off-brand Redbox movie, accidentally kills his dog, and later meets a jumpy young woman named Camille (played by Vanessa Hudgens) after he chops all of her wood (literally—there are a lot of trees around). But then Mr. Blut, Duncan’s canary-colored employer who is played by Matt Lucas of Doctor Who fame, decides to send Duncan to Belarus in an attempt to rob Duncan of his multi-million-dollar pension. And, as expected, more blood. 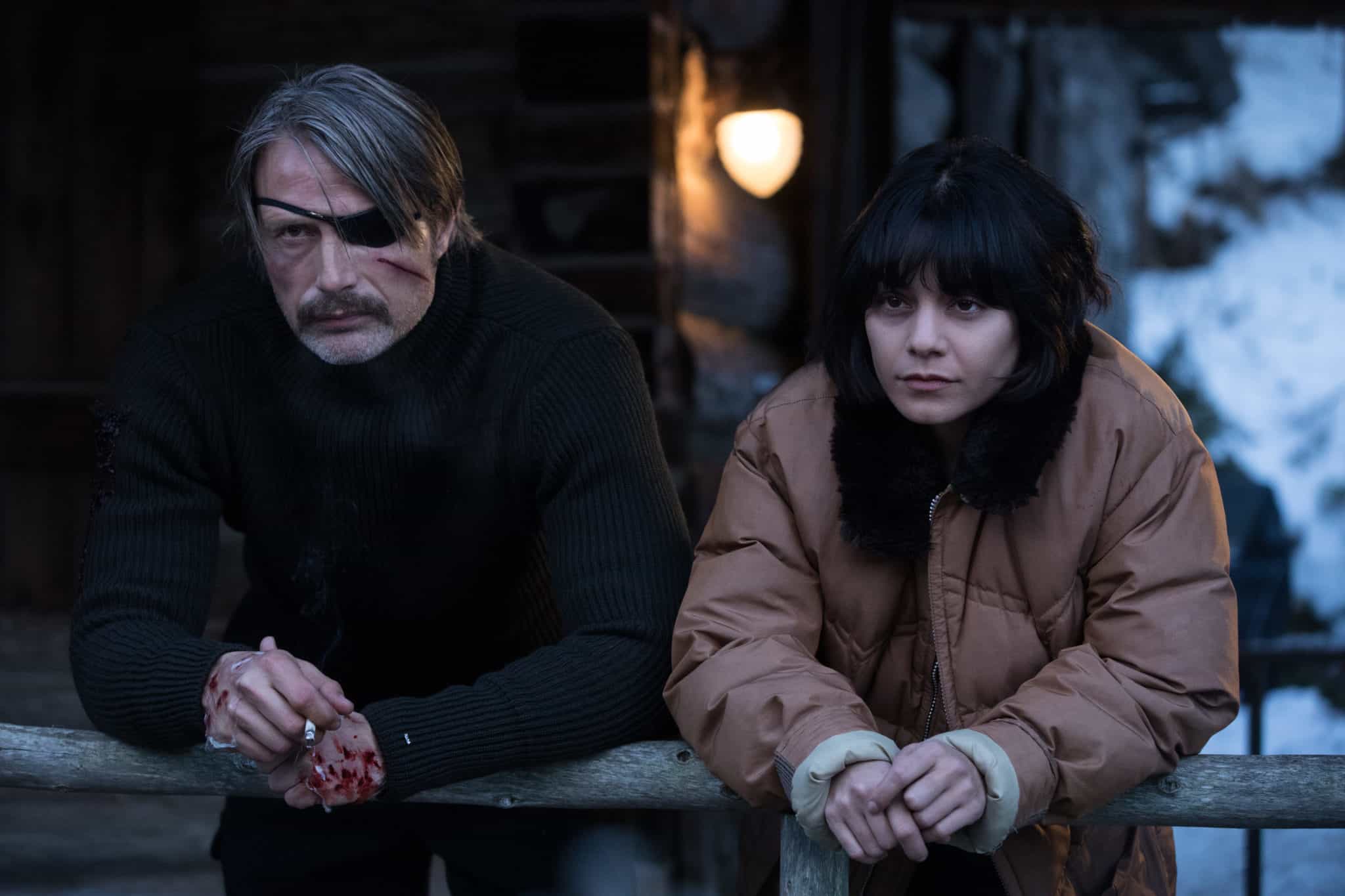 Polar may technically be an adaptation of a comic, but Polar is stylistically the child of gratuitously violent movies of the early 2000s. Gaudy, polished visuals and blunt narratives that rely on the idea that moviegoers find violence cathartic. For me, Kick-Ass 2 is the quintessential pop violent blockbuster flop. It attempted to one-up its predecessor simply by offering more profanity, more violence, and more Christopher Mintz-Plasse (who, at the time, was still popular). Jim Carrey, who played Colonel Stars and Stripes in the film, famously denounced the movie’s superfluous violence around the time of its release. Even without being a sequel, Polar has all the trappings of a film that is trying hard to one-up its rivals by offering more.

Sadly, like a suburban teenager on a blind date, Polar seems to try too hard, so most of the movie is unremarkable. What frustrated me most was the lack of characterization. New, temporarily important characters pop in and out of frame without adequate explanation, and the major characters are so aggressively two-dimensional that you could start the movie halfway through and understand their motivations entirely. I didn’t care much about any of the characters, so their deaths and successes didn’t interest me either.

Polar is violent, vulgar, and unnecessary. (Johnny Knoxville has a role, for Pete’s sake.) But I did appreciate Richard Dreyfuss’s cameo. And the movie’s final scenes have some notable moments. Vanessa Hudgens’s final monologue was impressive and well-acted enough that I wished it was in a better movie.

If you’re jonesing for some in-your-face, unapologetic action (and don’t care if you get subtlety, nuance, or effective characterization), Polar might be worth watching. Mads Mikkelsen looks fantastic with an eyepatch.