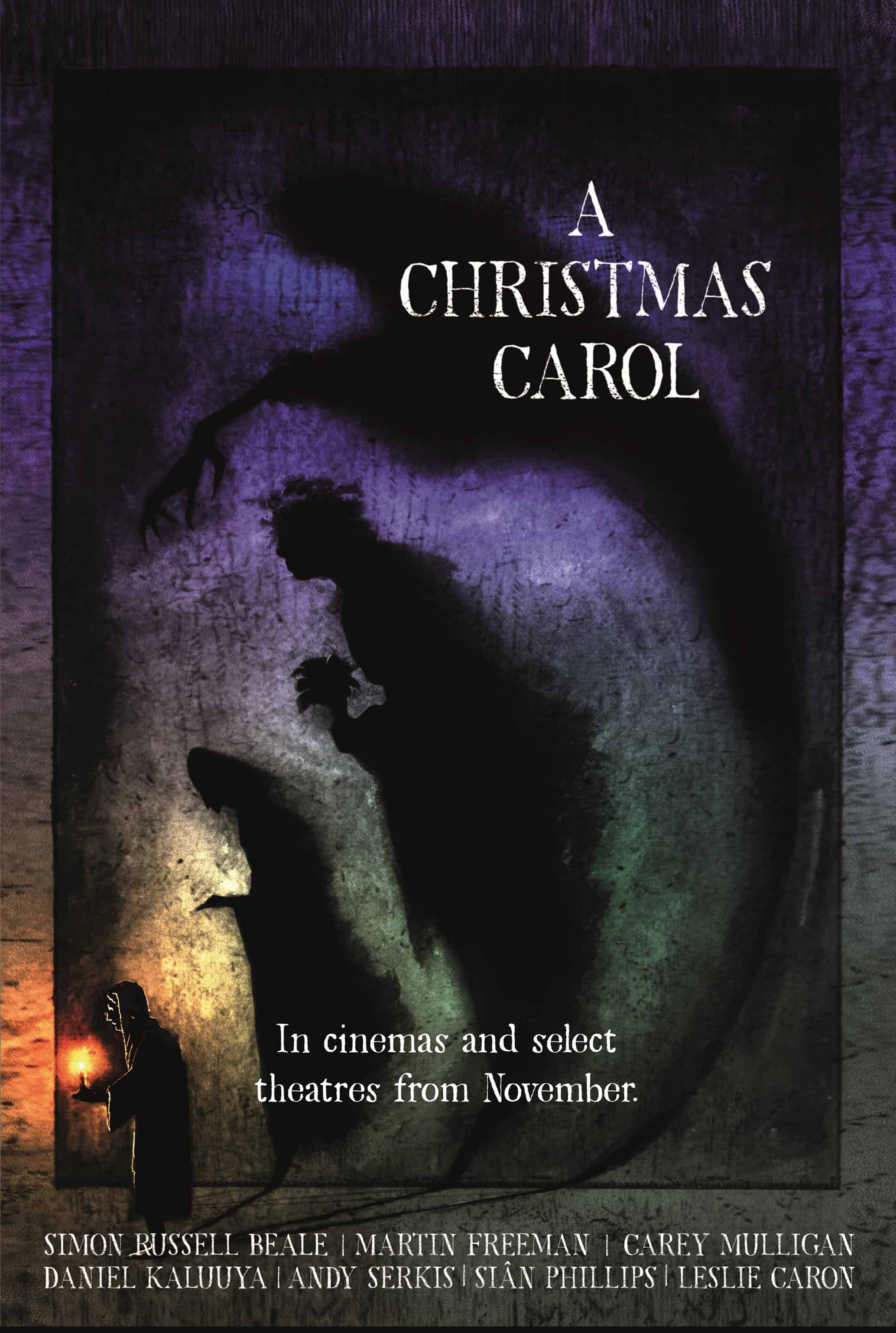 A bold new retelling of the classic story by Charles Dicken's of a miserly man's transformation into a loving and giving person.

Spoiler Level: Come on, how do you spoil A Christmas Carol? Surely everyone has seen at least one of the 11,235 versions they have made.

A Christmas Carol by Charles Dickens is one of the most adapted works ever written.  With multiple versions of stage plays, movies, television shows and radio programs.  Most of them follow the same format and have little differences.  Variations of scenes from the book are used here and there, but the main story remains the same.  Occasionally, a new version comes out that is strikingly different.  For example, the three-part FX / BBC TV movie with Guy Pearce had a much darker tone and gave Scrooge a more disturbing back story and a completely different emphasis on Scrooge’s reclamation.

But 2020’s British movie is something entirely new.  It is narrated by Sian Phillips as a Victorian grandmother reading to her grandchildren around the Christmas tree.  The actors on screen presenting the story, never open their mouths, but their parts are voice overs, and visual performers use interpretive dance to tell the tale.  This gives the impression of a ghostly dream gracefully playing before our eyes.  It is extremely theatrical and a bold choice for today’s audiences.  This will not be everyone’s cup of tea.  If you enjoy a Christmas Carol, and your likes tend to the more presentational artistic qualities, then you may really enjoy this wonderful retelling. 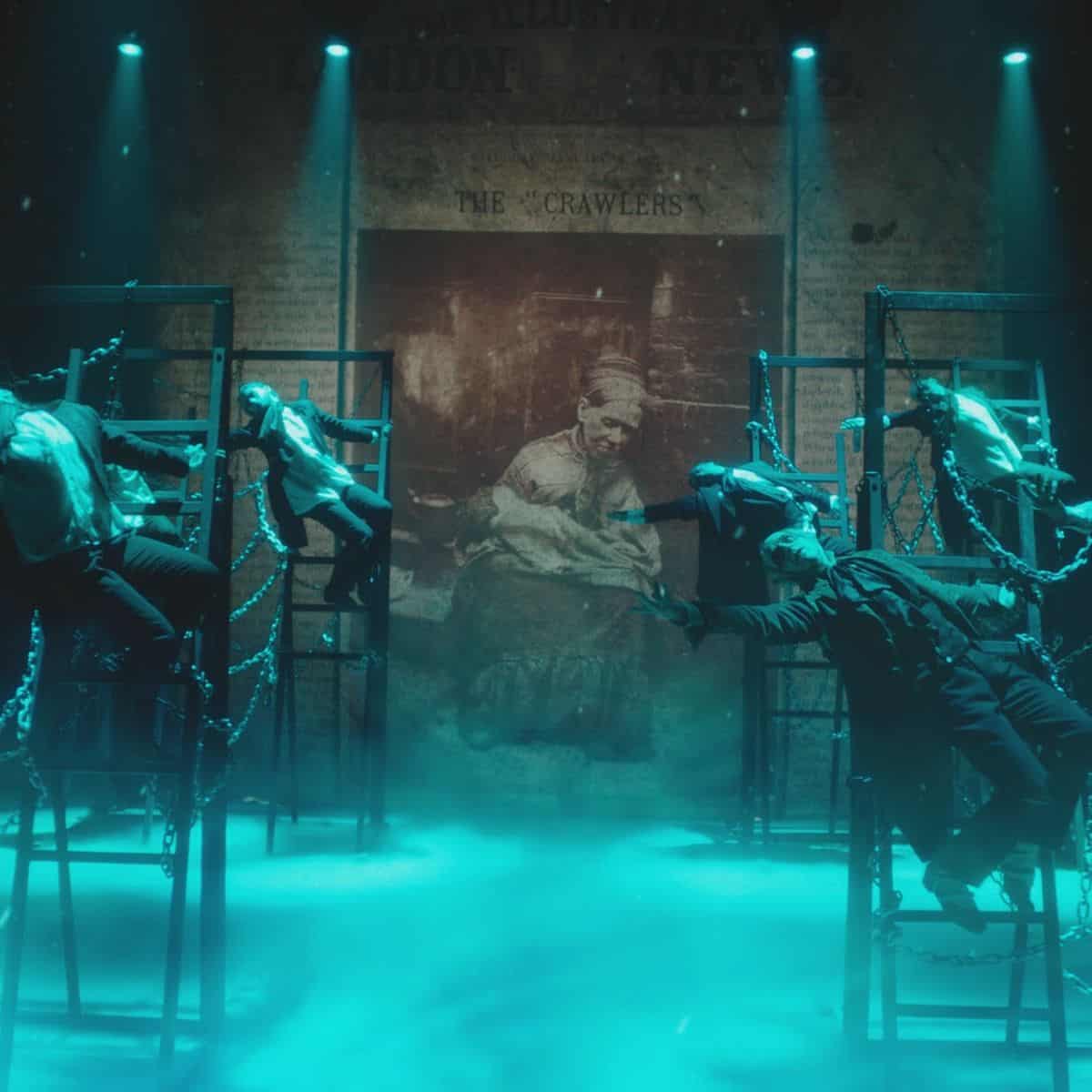 If you don’t know the story of A Christmas Carol, then you may have been living in a cave your entire life.  Basically, an old stingy miser is visited by the ghost of his business partner who explains that if he doesn’t change his grumpy greedy ways, then he will be doomed to torment as he walks the earth for eternity, fettered with the chains he forged in life.  To save him, he is visited by three spirits.  The Ghost of Christmas Past, The Ghost of Christmas Present, and The Ghost of Christmas’ Yet to Come.  They remind Ebenezer Scrooge of his past, show him the truth of his present and gives him a glimpse at what his future may be if he does not change.  The story is a heartwarming one of redemption and transformation. 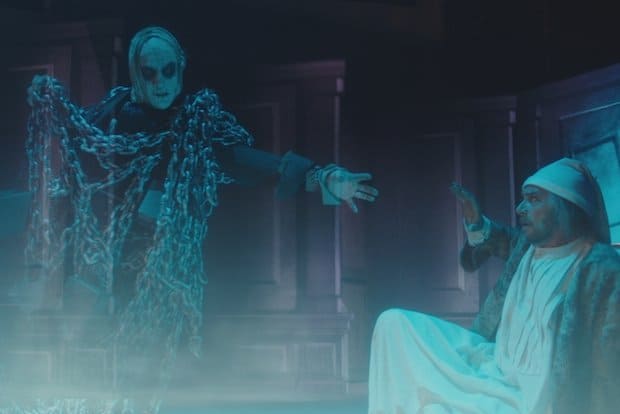 The cast was full of heavy hitters.  Sir Simon Russell Beale expertly voicing Ebenezer and Martin Freemen vocally bringing Bob Cratchit to life.  Michael Nunn is Scrooge’s physical presence with Brekke Fagerlund Karl as Bob’s (also lending the physicality to The Ghost of Christmas Yet to Come) were both appropriately cast.    Andy Serkis, known for his physical work with CGI characters, breaks his norm, by being only the voice of Marley, with Russell Maliphant performing the part on screen.  Classic screen actress Leslie Caron beautifully voices The Ghost of Christmas Past.  The real star to me was the setting and imagery that was created.  As a previous theatrical set designer, I very much enjoyed the more staged elements used in this movie which add to the very tone of the film, showcasing the desolation of the poor and yet the warmth in their hearts.  Flurries of snow continually fall in the background.  The Tiny Tim scenes were especially powerful, with a soft glow underlighting the floorboards of a sparce room creating a visually stunning picture that added to the tone of the story.  I cried for the first time in a very long time at Tim’s ultimate fate.   Adding to the imagery was wonderfully chosen music to accompany the scenes.  Classic songs that had a slightly modern beat lent to the overall artistic quality of the film. 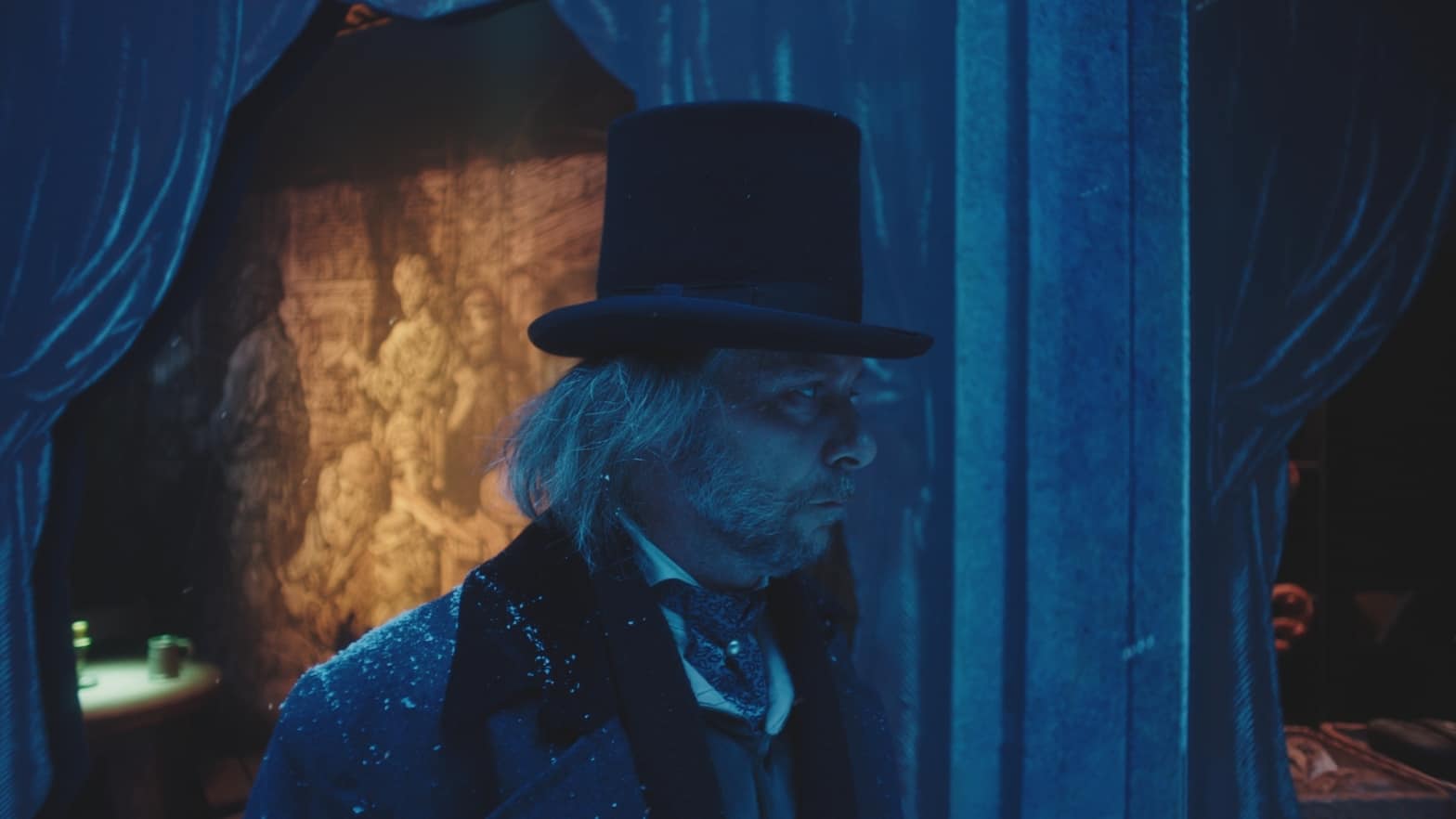 As much as I loved this version of the story, there were some faults.  The dancing style didn’t always match the emotions of what was happening on screen and sometimes seemed aimless instead of well-choreographed.  Almost as if the actors were just directed to “Do what you want” instead of carefully choosing where and when to move. The Belle and Ebenezer breakup lost a lot of the impact that it should have had due to this.  In the Marley Ghost scene, the ghost spun and moved at random, never allowing the audience to focus and detracted from what was happening.  In addition, some of the vocal performances were flat and lacked any power.  The Ghost of Christmas Present should be boisterous and jovial, but Daniel Kaluuya’s performance felt subdued and emotionless almost sounding bored.  These were very minor things and should not stop anyone from seeing this film.  It is available on Amazon Prime and a few other streaming services. 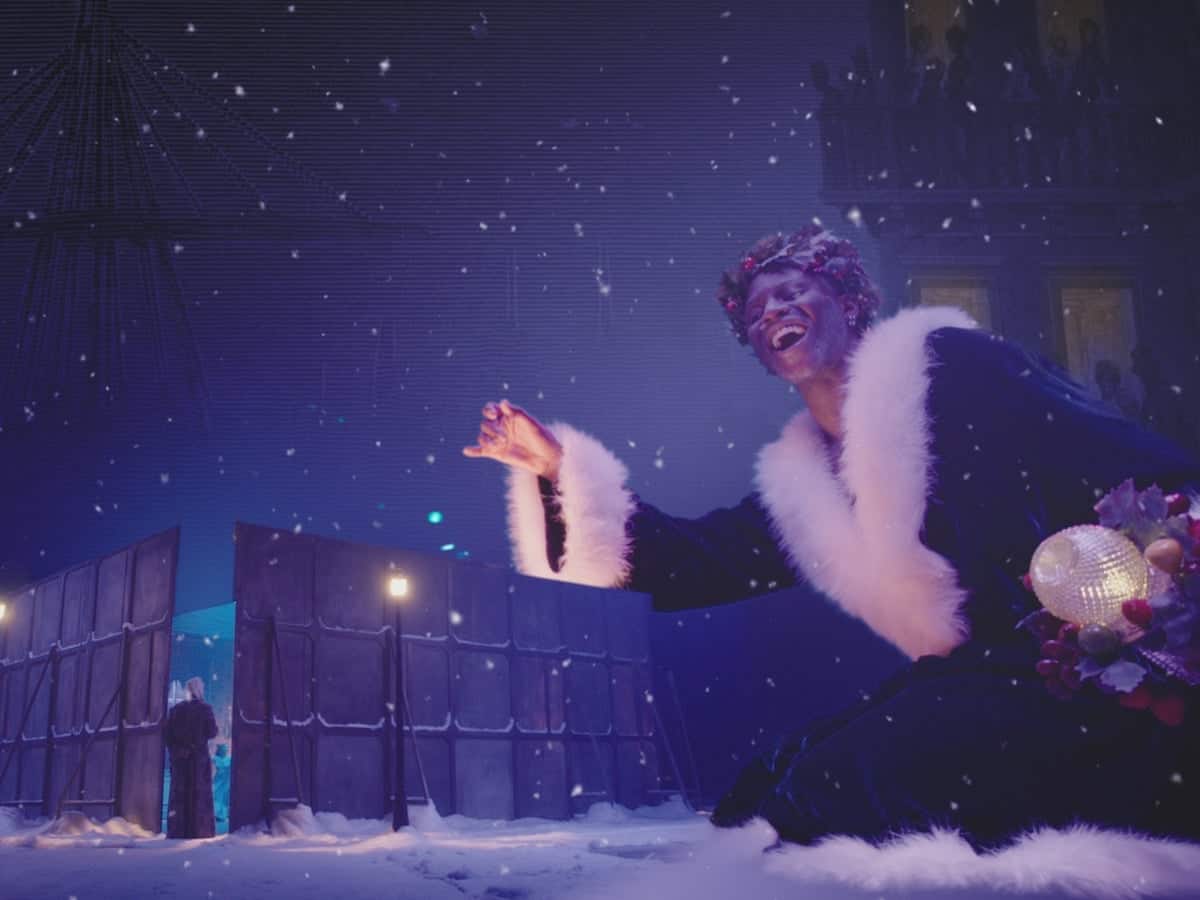 Overall, an exceptionally bold and artistic movie full of stunning imagery and beautiful music and dance, and of course an old story full of love and redemption told in a new and wonderful way.