War of the Worlds also debuted in 1953. Unlike The Day the Earth Stood Still, this film was shot in color. Technicolor would give the scenes a deep, saturated feel. The brilliant green would be used on the alien crafts, which were designed by Albert Nozaki (Art Director for When Worlds Collide) to resemble floating manta rays. The style was striking and their movement was haunting.  An articulated metal neck and arm extended from the ship’s top and a kind of eye would fire destructive beams. The machines were a departure from the typical saucer-type shape of other spaceships of the time. 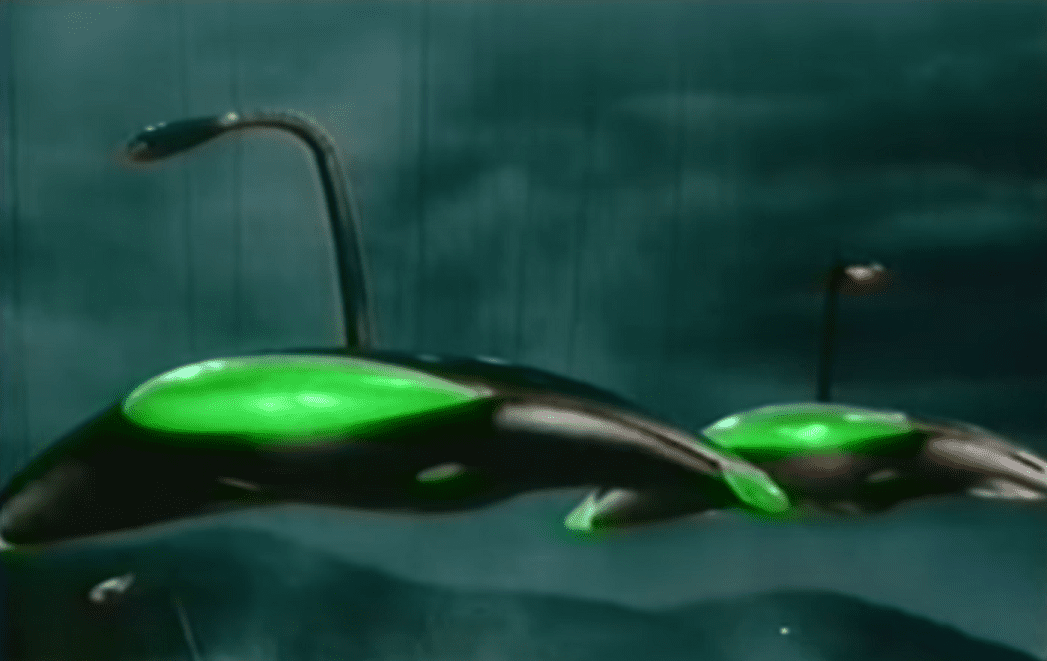 Each of the ships, designed to float above the ground, were suspended from about twenty thin wires. Some of the wires went to different electronics responsible for the inner green glow. Three of the machines were made from copper and were very heavy. The wiring for the ships was painted blue so they would not show up against the bluescreens used in filming. 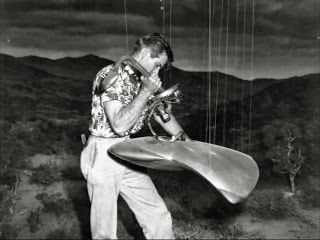 The different rays emitted by the ships were made from firing an acetylene torch, amplified by a fan, against a black background. This effect would then be superimposed onto the screen along with an eerie sound provided by Howard Beals, Dan Johnson, Tommy Middleton, and Walter Oberst. Ben Burtt would remaster and contribute to the sound design for the 4K master.

The distinctive “ray-gun” sounds are some of the most recognized in media. Described as a kind of thrumming “shrieking” sound, this was achieved by an orchestra playing a variety of cellos and violins. This sound was a standard in many children’s shows for what a “ray-gun” sounded like. It was featured on The Outer Limits in the episode, The Children of Spider County.

The “heat-ray” sound effect was created by combining three electric guitars being recorded backwards. It was an easy, but ingenious use of an everyday instrument used in a non-conventional way.

The pulsing green “skeleton beam,” which disintegrates the target, is a stand-in for the chemical weapon written about in the Well’s novel. This sound effect was created by striking a high-tension cable with a hammer. It’s a very simple, but recognizable sound. Later, this sound would be used on Star Trek (the Original Series) as the sound of a photon torpedo being launched. For reference, the sound has been uploaded on YouTube. https://youtu.be/tPImB7ePTwo

Charles Gemora and his 12-year old daughter, Diana, built the film’s creature. It was made from a base armature covered in “chicken” wire (called this because of its use in chicken pens) and plaster-covered bandaging. The back of the creature was left open, allowing Charles to kneel and use his hands to articulate the arms of the being. Pull-rods in the creature’s hands allowed its fingers to flex and move. Veins in the Martian’s head camouflaged the different wires used to light the thing’s singular eye. 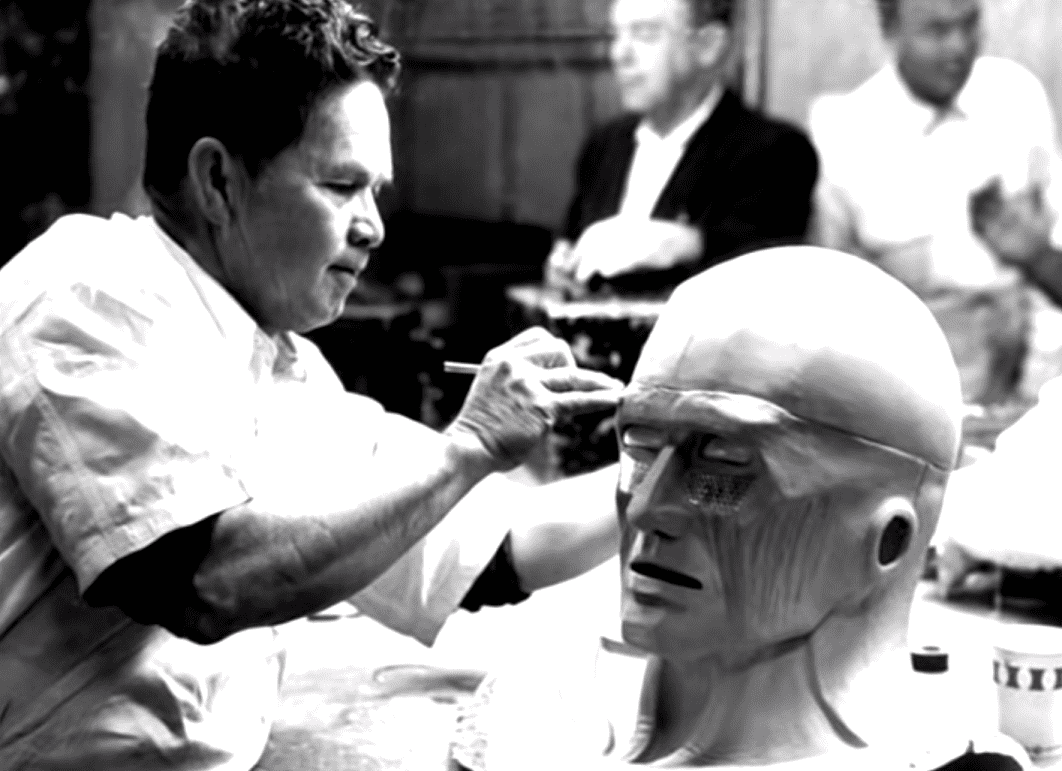 Most fans of the film will remember the scene at the end of the film. The Martian arm is exposed as its fingers inch toward the edge of the opening door. To achieve this effect, Charles Gemora blew into a simple tube, which made the veins in the arm pulse. As the pulsing slows, the lighting changes from red to green. The air is sucked out of the prosthetic and the alien “dies.”

Actress, Ann Robinson, says the miniature version of City Hall was “8-10 feet tall. Men were on ladders to get to the top of it to make the beacon to work.” Each of the miniatures was built to scale, meaning they were exact duplicates of actual buildings in Los Angeles. “It looked like it just would have come to life at any minute,” Robinson says of the miniature set. (Source: The Sky is Falling: Making ‘War of The Worlds.’) 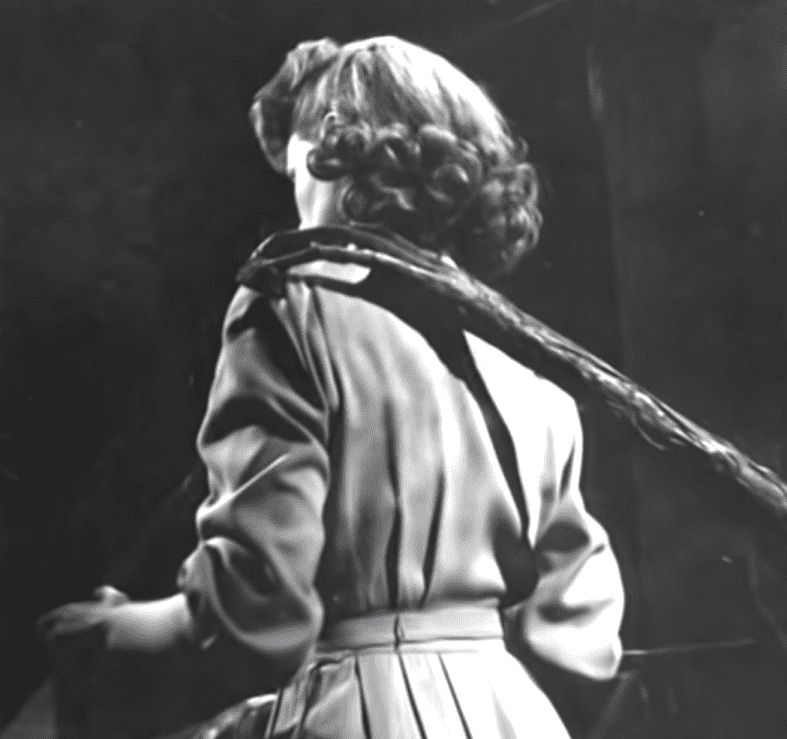 One such miniature, the Flying Wing bomber which drops the bomb on the Martians is the only surviving miniature and is housed in the Smithsonian Institution.

Critics of the film might think the special effects for War of the Worlds to have been sub-par. The quality of the work was among the highest of its time. Replacing the 3-strip Technicolor with the Eastman Color stock degraded much of the image resolution and degraded the lighting. This caused the suspension wires for the Martian ships to become much more visible, as they had been painted for a specific usage. The film was nominated for three Oscars, Editing, Sound Recording, and Special Effects. It won in the category of Special Effects. 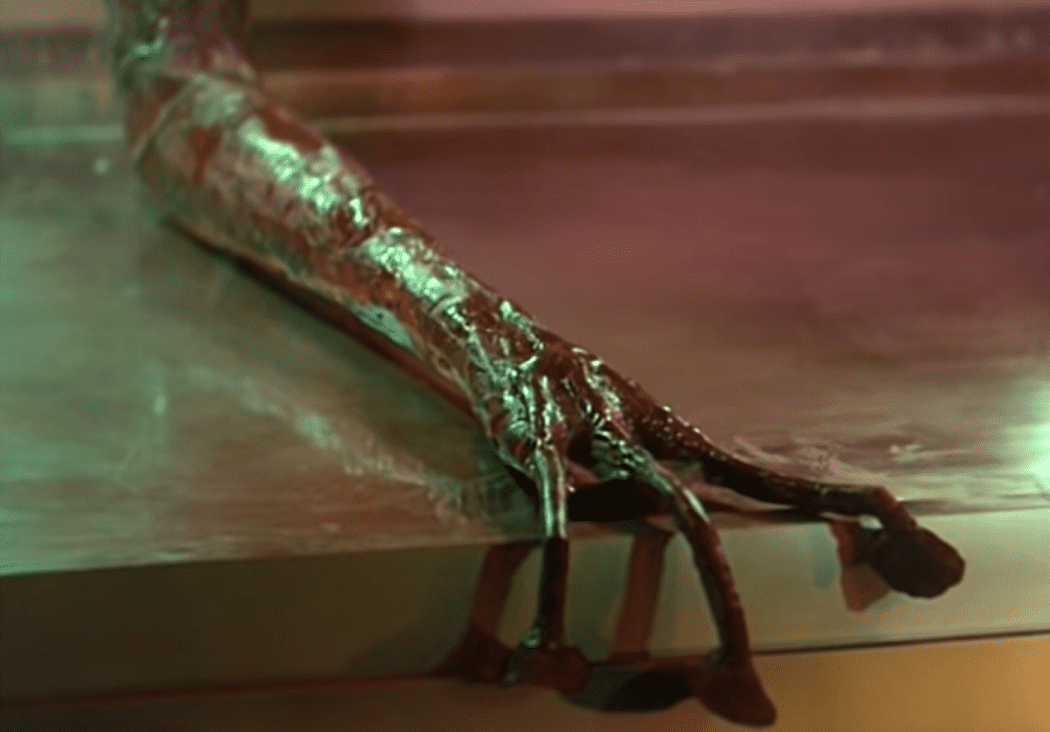 In spite of this minor criticism War of the Worlds was 1953’s biggest science fiction film.

A minor piece of trivia for this film, Carolyn Jones would appear in this film as the uncredited Blonde Party Guest. Jones is best known for her role as The Addams Family matriarch, Morticia. 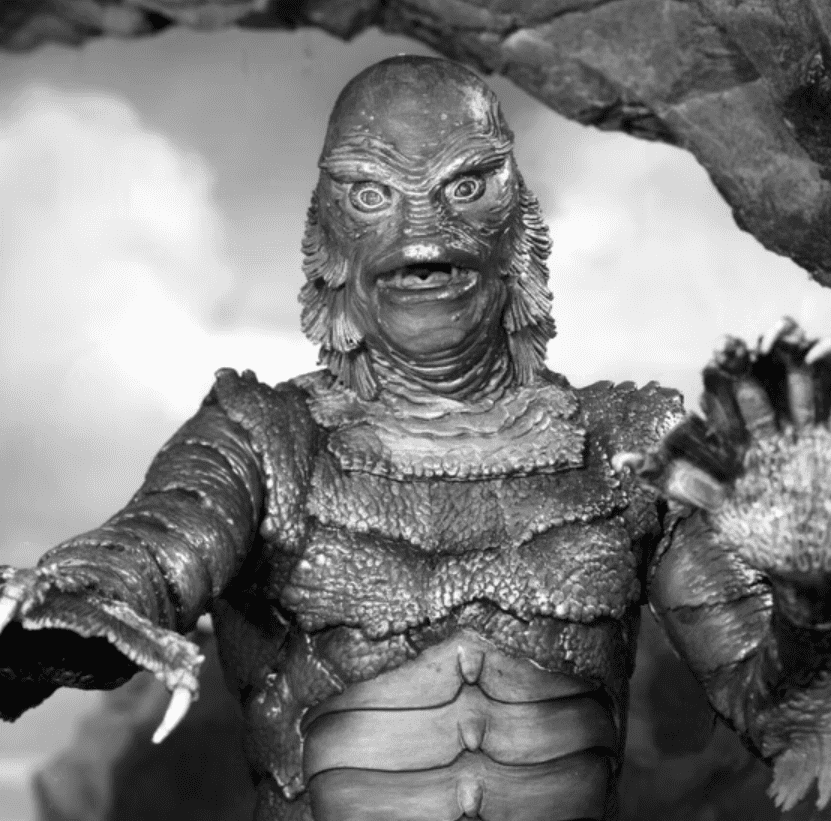 In 1954, Universal Studios released Creature from the Black Lagoon. Having directed House of Wax, director, Jack Arnold was hired to bring this film to the screen. The story, a take on Beauty and the Beast, proved simple enough. Jack Kevan, who worked on The Wizard of Oz, created the bodysuit for the film’s “Gill-Man.” Chris Mueller Jr. sculpted the head. Actor, Ben Chapman played the creature for the majority of the film while Ricou Browning did the underwater shots. 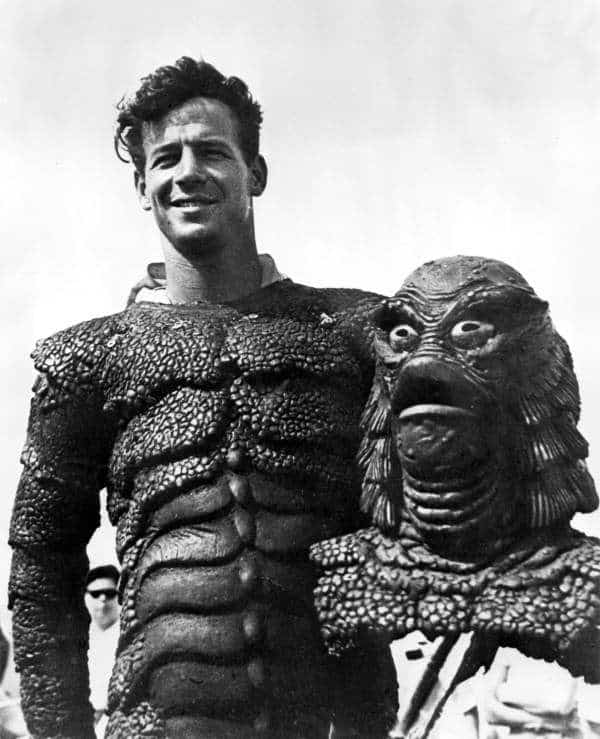 Make-up artist, Bud Westmore would receive singular credit for the concept design of the creature. However, the approved design was the work of Milicent Patrick, an animator for Disney since 1939. Patrick also created Chernabog, the creature in the Night on Bald Mountain sequence for the 1940s film, Fantasia. She would also become the first woman to work in the make-up department. 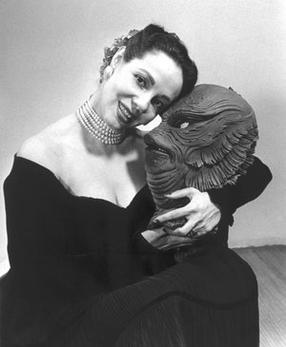 While not heavy with special effects, Creature from the Black Lagoon would be among the 3-D films released in the 50s and one of the most successful.

Maybe one of the most influential films of the era came in the form of Forbidden Planet. Released in 1956, this film would be one which claimed a lot of “Firsts.” It was the first science-fiction movie to be filmed in color and CinemaScope, a process utilizing an anamorphic lens making widescreen easier to utilize. The process was created by Spyros P. Skouras, president of 20th Century Fox, at the time.

Forbidden Planet was the first film to take place on a foreign planet and to have a robot with a personality which included humor. It was the first film from MGM studios with a “first-class” special effects (http://www.filmsite.org) budget. This budgetary allowance would make it possible for the effects to take the audience to another planet and keep them there. Somehow fitting, Forbidden Planet was filmed on the same stage as The Wizard of Oz and the garden of Altair IV was a refurbished Munchkin Village set. Production took up to 89,000 square feet of space, another first for its time.

The opening scene of the approaching United Planets Cruiser C-57D was made from a shot of a small-scale model and a larger model traveling on an identical track. To conceal the film cut, the shot uses a shadow effect. This increases the sense of depth for the ship. Three different miniatures were used, one measuring 22 inches, another at 44 inches, and the last at 82 inches in diameter. The largest miniature, made from wood, fiberglass, and steel, contained all of the mechanics necessary to show a landing pedestal, working ramps, and the red engine area.

The overall design of the ship inspired and influenced the U.S.S. Enterprise on Star Trek and later the Jupiter 2 from 1965’s Lost in Space.  C-57D went on to appear in seven different episodes of The Twilight Zone from 1959 to 1961. In 2005, one of the ships featured in the film, Serenity, bore the number, C57D.

One of the film’s supporting characters, Robby the Robot, is the creation of MGM production designer, Arnold Gillespie, art director, Arthur Lonergan, and writer, Irving Block. The concept for the character was refined by Mentor Huebner, a production illustrator. Robert Kinoshita, a production draftsman and mechanical designer, perfected the design.

MGM invested up to $125,000 in the cost of creating the robot. Robby was made from plastic, rubber, metal, glass, and Plexiglass and represented many new techniques of the time. The plastic portions were made by vacuum-forming heated plastic over wooden models was a new technology for 1956. The plastic used had the brand name, Royalite, and was the main component in luggage. 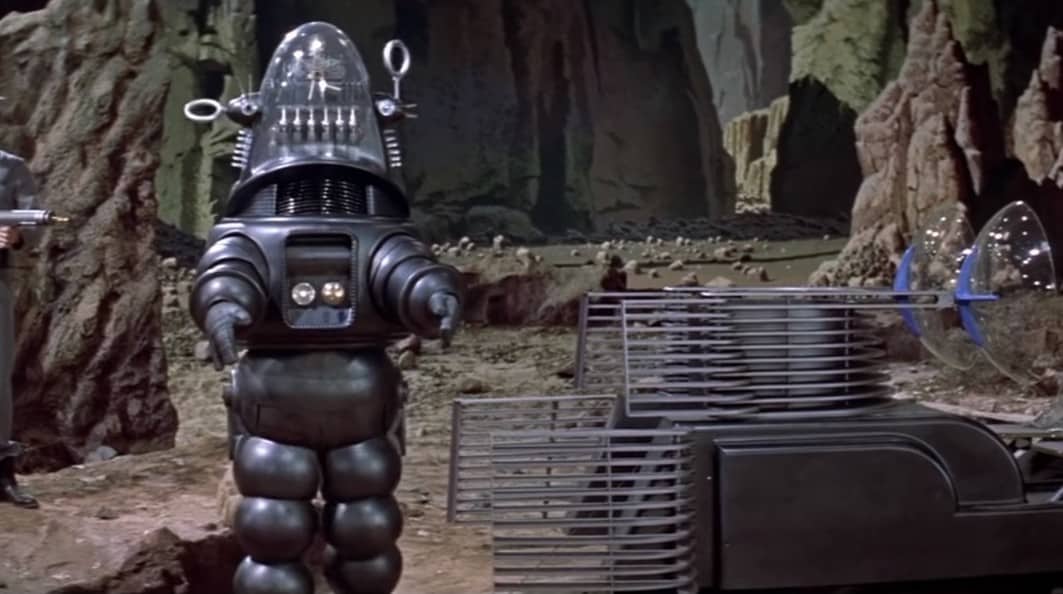 Standing just over 7.3 feet tall, Robby was made in three detachable sections, the head, the chest, and the lower portion containing the legs. Being made in this way meant the suit could incorporate articulated joints. This allowed the actor inside the suit to move in a variety of ways, unlike other film robots of the time. Stuntmen, Frankie Darro and Frankie Carpenter, operated the robot. Both were shorter than the actual size of the prop, allowing them a bit more freedom.

At the time of filming, the voice for Robby was performed off-camera and fed into a voice-actuated circuit fed into the headpiece. This allowed for synchronization of the flashing voicebox. The screen voice for the finished film was done by actor, Marvin Miller. 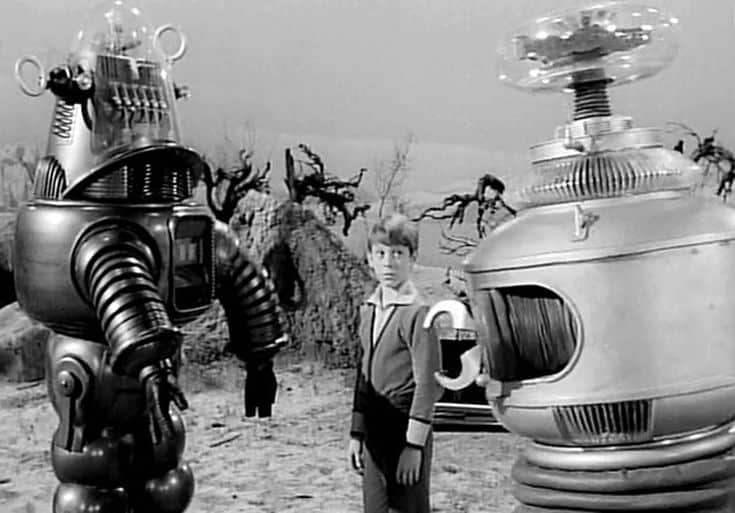 Robby would later appear in MGM’s film, The Invisible Boy, then in episodes of The Gale Storm Show, The Thin Man, Columbo, The Addams Family, Lost in Space, The Twilight Zone, The Man from U.N.C.L.E., Mork and Mindy, Project U.F.O., Space Academy, and others. Robby can also be spotted in the film, Gremlins and was featured in a commercial for AT&T in 2006. In 2004, Robby was inducted into the Robot Hall of Fame.

Forbidden Planet garnered an Oscar nomination for Special Effects because of the ship miniatures and the matte backdrops of Altair IV. Another aspect of effects used for the film came from its musical score. Bebe and Louis Barron, two pioneers in the field, were responsible for making Forbidden Planet the first science-fiction film with an all-electronic musical score. 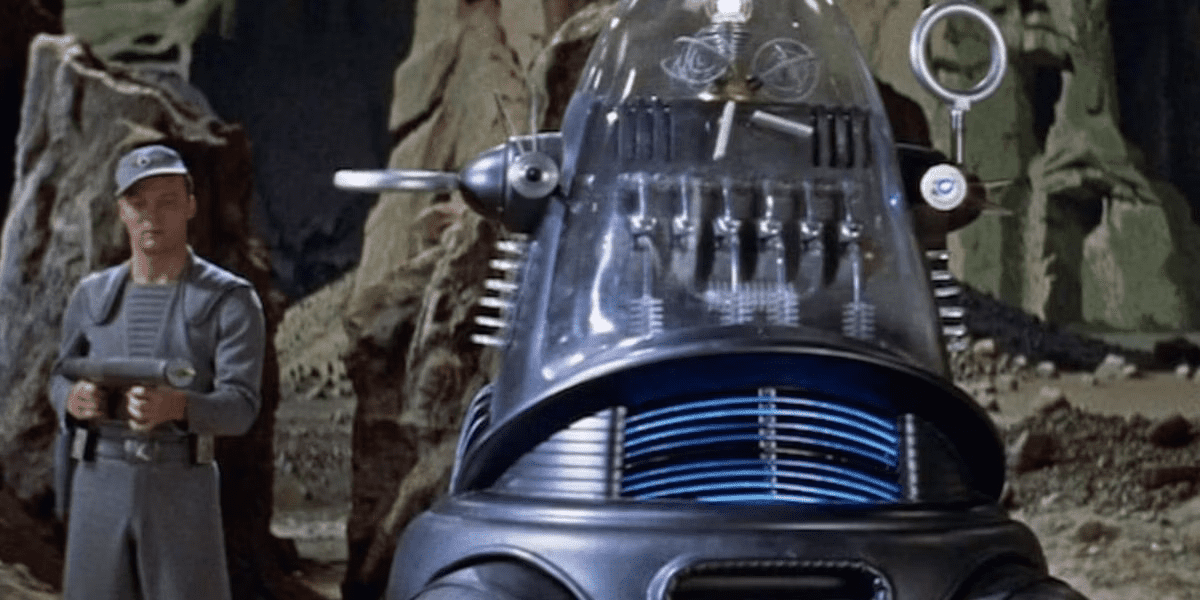 Citing the 1948 book, Cybernetics: Or, Control and Communication in the Animal and the Machine, the Barrons used equations from the source to build electronic circuits to create sounds. They used a ring modulator to produce many of the tonalities, meaning they would be unpredictable and unique. The Barrons did not consider the generated sound as notes, in the traditional sense, but more like actors, as the sounds could not be recreated. Added reverb and tape delay were added into the sounds to produce the final electronic track for the film.

Bebe, who did the composing of the recording, sorted through hours and hours of recordings to get the right ones. She is quoted (Wikipedia) as saying they “just sounded like dirty noise.” In addition to the other procedures, she and Louis would use tape loops and manual synchronization of the outputs to produce the original soundscape for Forbidden Planet.

This would also be the film debut of Leslie Nielsen, as Commander J.J. Adams.