Spiderhead: A Prisoner of Deeds 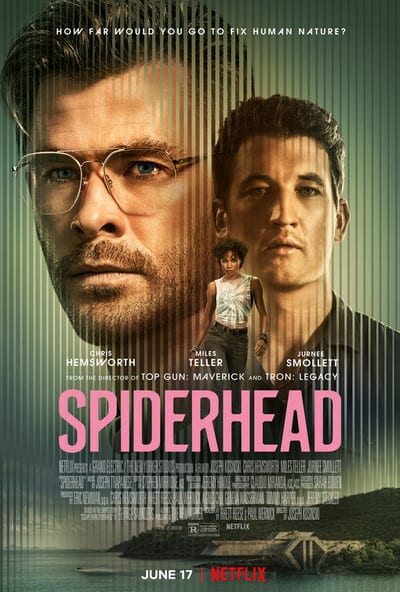 In the near future, inmates can avoid state penitentiaries by volunteering and qualifying to be used as subjects in drug testing experiments.  The drugs being tested control emotion, including love.

Based on a 2010 short story by George Saunders, Spiderhead, is a dark and twisting psychological thriller about the lengths one will go to escape the pain of the mistakes we have made in the past, and the prison walls we build with our own guilt.  The setting is a pharmaceutical testing facility that offers inmates an alternative to prison.  Inmates are fitted with a small device installed on your lower back that administers different drugs that are housed within the units.  In monitored experiments, the level and duration of injection is controlled via smart phone by Steve Abnesti (Chris Hemsworth) and his assistant, Mark (Mark Paguio).  Prisoner Jeff (Miles Teller) begins to have feelings for fellow prisoner Lizzy (Jurnee Smollett), neither of them are hardened criminals but made a single horrible mistake in their lives, which led them to their incarceration.  The drugs being tested on the prisoners control emotion and can even go so far as to temporarily create the feeling of love between people and there is a drug for the opposite, the most intense mental anguish, the feeling of your worse day times ten. The love Jeff feels for Lizzy is natural and not induced by the drugs, which becomes very important to Abnesti. After an inmate dies in one of the experiments, Jeff begins to learn what is really happening at Spiderhead. The basic premise remains intact when compared to the source material, but the movie diverges to flesh out the characters and add additional plot twists.  The script for the film is smart and interesting, but for the most part, this is not an action movie and more of a psychological drama centering on the characters and what they are going through.  The pacing was a bit slow, but the story flowed well and I was still engaged by the characters and the dialogue.  The actors were great with Miles Teller giving a nuanced performance as a man defeated by his past and the emotional scars that come with one terrible decision.  He is reserved for most of the film, but you can feel the anguish from him and you can tell he is a good person.  There are two sides to Abnesti, genius inventor and more importantly, the smarmy salesman.  I did not really believe Chris Hemsworth was a genius scientist, but I did believe he was a very confident manipulator who has gotten away with much in his life on good looks and charismatic charm.  The type of guy you instantly believe no matter what they tell you and are drawn to follow.  He even mentions that good looking people get away with a lot more, a fact he has taken advantage of more than once. Chris played that part of Abnesti to a tee. Mark Paguio was good as the morally conflicted assistant, who really just wanted to help people.

The didactic themes of the movie are dark and sometimes subtle, centering on grief, guilt, and despair in society. The movie raises the moral question that should these dark emotions be removed from the world, and if a love potion existed, would it really be love? The story exposes that for many prisoners, the stone walls of a facility aren’t really the prison.  The real jail cell is the walls our mind puts around us.  The terrible guilt that comes with fateful decisions that hurt or kill the ones we love, and can anyone really ever be released from the mental prison we sentence ourselves too.

Overall, the movie was good but a little slow moving with some great nuanced performances from a good cast.  The moral questions explored were fascinating and the plot twists kept the production intriguing.

Spiderhead: A Prisoner of Deeds