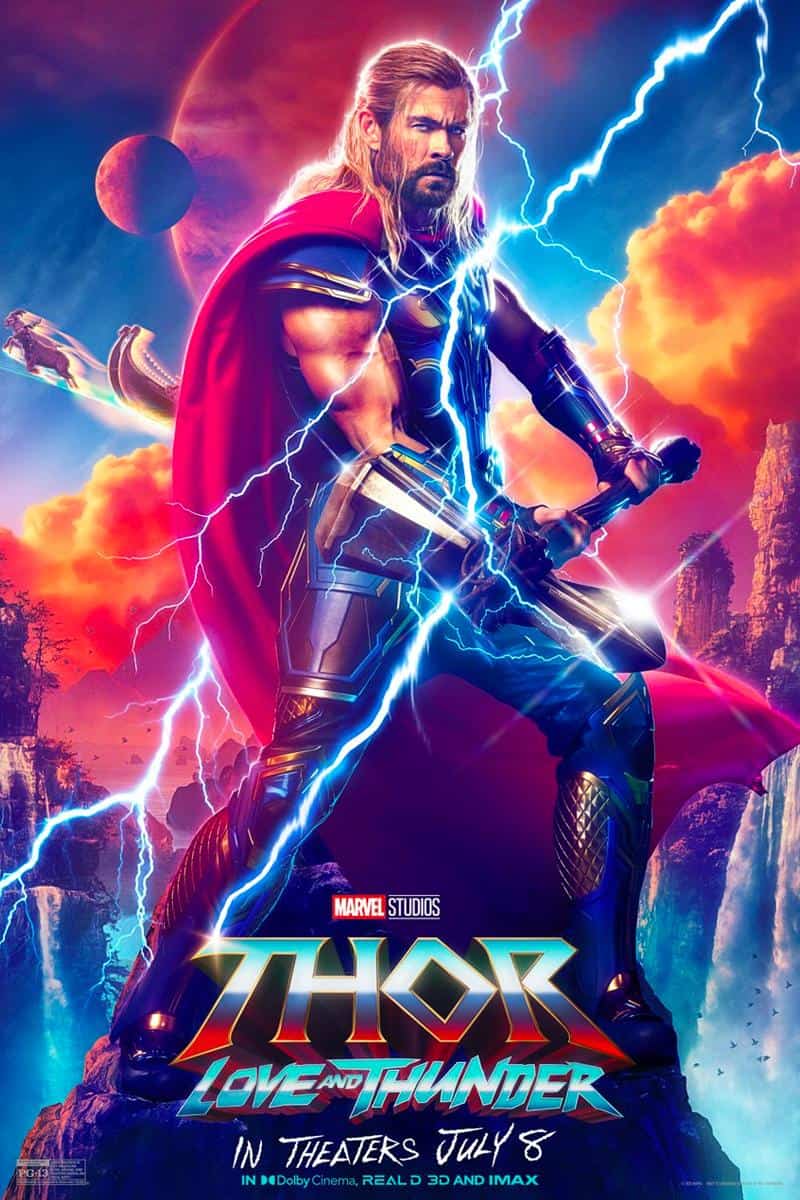 Thor reunites with ex-love Jane Foster, who has reassembled Mjolnir and now has the power of Thor, as a team, they attempt to stop Gorr, the God Butcher.

Gorr (Christian Bale) lives on an unnamed planet that is decimated by drought and famine.  He prays to Rapu (Jonny Brugh), his god, to save his dying daughter, but no help comes.  As he is cradling her grave and awaiting his own death, he sees what he believes is a mirage and stumbles upon Rapu, who has won a battle with an opponent who wielded the Necrosword, a weapon that can kill gods.  Learning that his god was not looking out for him and is actually about to kill him, Gorr is chosen by the Necrosword and kills Rapu and then vows to kill all gods.  The rest of the movie is a story being told to us by Korg (Taika Waititi), and I like to think that what we see is the embellished, over the top, recounting of the history of Thor and Jane Foster told through the eyes of Korg as a comedy to entertain children. 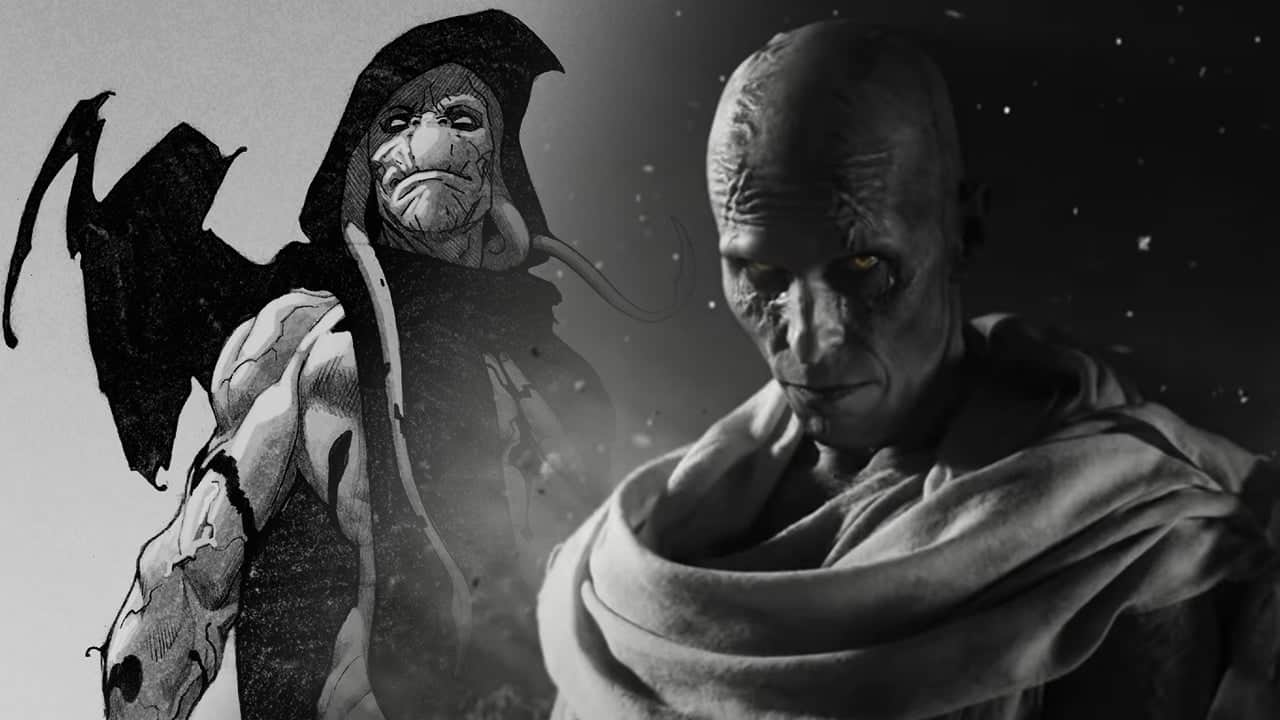 Thor (Chris Hemsworth), having been spending his time with the Guardians of the Galaxy, finds out that New Asgard on Earth is in danger and leaves the team to come to their aid. Once there, Gorr has conjured creatures made of shadows to kidnap the children of Asgard.  While fighting, Thor sees his old broken hammer, Mjolnir, flying around and finally comes face to face, with who is wielding it:  ex-girlfriend and love of his life, Jane Foster (Natalie Portman). Fighting by their side is the current ruler of New Asgard, King Valkyrie (Tessa Thompson). The team is successful in staying alive, but the children are taken and the rest of the film is attempting to get help from other gods and the eventual attack on Gorr to save the children of Asgard and stop Gorr.  I will not recount how or why Jane gets the hammer that gives her the power of Thor, but she does.  In the end, some characters don’t make it, some are badly injured, but for the most part, everyone gets what they are looking for.

The Marvel Cinematic Universe has earned a name for itself for having high production standards, and that is definitely true in this film.  The special effects are spot on. The visuals are breathtaking and the battle scenes are well choreographed and exciting. If you like classic 80s rock, especially Guns N’ Roses, then you will love the soundtrack.  I prefer original music to be scored to the film, but the songs they chose fit pretty well, and I like them, so it wasn’t too bad. 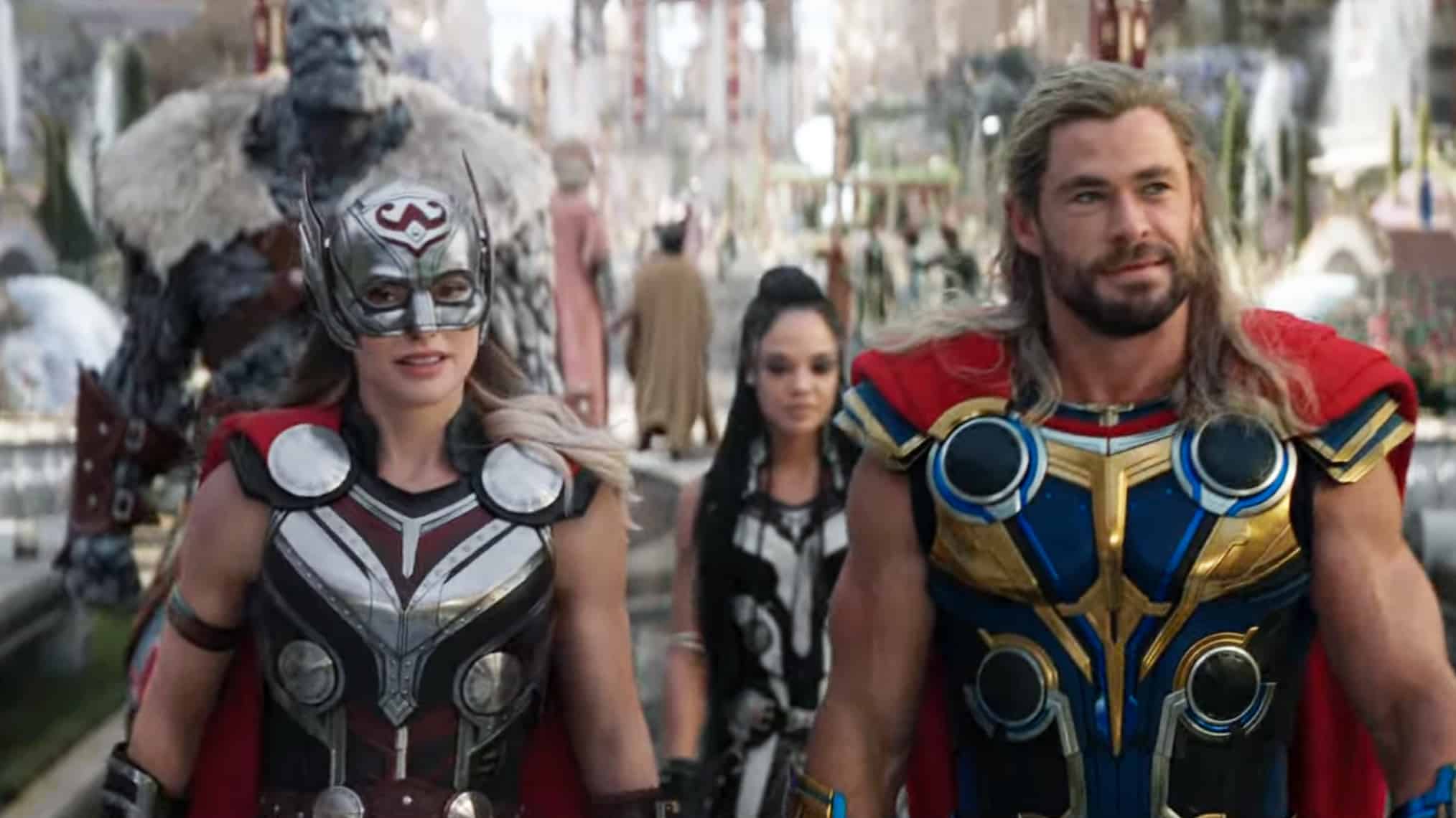 So, with all that going for it, what could possibly be wrong? Why didn’t I connect with the film?  There is an old adage, “Less is More”, that I feel the director and the writers could benefit from.  There is a fine balance that needs to be to make comedy effective, especially in a film where you are trying to create an emotional connection with the audience and this film was wildly out of balance.  To be a good comedy, the humor should come organically, and not feel forced.  When a production is trying to be funny, it often misses the mark completely, which I feel is the case here.  In just about every scene was some sort of joke that just wasn’t funny and the audience I was in, never really laughed, there were some chuckles, but very little reaction. Because the humor came off as forced and not natural, it made the rest of the film harder to connect to.  There is some very touching dialogue in this film, that could have really had an emotional impact, had the story used just a bit less over the top comedy and let the humor come naturally these scenes would have had me bawling (I am an easy cry, and I didn’t shed a tear, which says a lot…seriously…I cry at everything). This is all a shame, because the cast is stellar, and all have amazing comic timing. I will say, that when Christian Bale was trying to be funny, it was cringe worthy, and the scene with The Guardians, specifically Chris Pratt as Starlord felt off for some reason.  Can’t really put my finger on it, but it felt awkward. It literally didn’t sound like the Star Lord we have come to know. Since the trailers played up the Guardians being in this movie I expected more than the short scene they were in.  The new costumes were nice and a bit more colorful, which I liked, but I did hear some people describe it as gawdy. Particularly off balance was suddenly giving Mjolnir and Stormbreaker personalities a’ la Dr Strange’s cloak. When not trying too hard to be funny, the script was quite well written, with some witty banter, empowering speeches and what could have been tender and touching moments.   Taika Waititi who directed and co-wrote the script, does offbeat comedy very well, but it’s an acquired taste and he just tried to force too much of it into this film, which had the opposite effect and making it feel a bit disjointed and clumsy. In the end, the movie was semi-entertaining, but lacked any emotional impact and quite frankly, wasn’t as funny as it thought it was. Chris Hemsworth, shedding his “dad bod” is back in shape looking better than ever before. He is truly the God of Bods.
There is a mid-credits scene and an after-credits scene.

Just to reiterate, this is one person’s opinion and if you loved this movie, the more power too you!

Over all, it was an ok film, but in the grand scheme of MCU movies, really didn't make that big an impact. Like with Thor: Ragnarok, I may end up liking the film better on second viewing, but like Ragnarok, it will never be one of my favorites.