THOR heads to outer space with Guest Stars galore along for the ride!

What You Should Know:
If you haven’t seen Avengers: Age of Ultron or Captain America: Civil War, this story explains where Thor and the Hulk were, after and during, those films. You don’t NEED to see them to understand Thor: Ragnarok, but it certainly helps tighten one’s focus.

What You’ll Find Out (SPOILERS):
While searching for the Infinity Stones for 2 years after the events of Age of Ultron, Thor becomes imprisoned by Surtur, the fire demon of Asgard. Thor learns from Surtur that Odin has disappeared from Asgard and that once he unites his crown with the Eternal Flame in the Hall of Treasures, the prophecy of the end of Asgard will be upon them: Ragnorok. Thor relies on his trusty hammer to free him and help him defeat Surtur, taking the crown and believing he has thus prevented Ragnorok from taking place.
Thor returns to Asgard to find Heimdall also missing, and Loki impersonating their father. Forcing Loki to take him to Odin, they head to NYC, where Loki left him in a nursing home, which is now being demolished. Suddenly, a portal appears, swallowing Loki. In his place is left a business card with an address: 177A Bleecker Street.

At the home of Stephen “Doctor” Strange, its revealed he sensed their presence and wanted to offer assistance. See, he also monitors the dimensional highway into the earth and sensed a foreboding with Loki, who he allows to keep falling for 30 minutes while Thor and the Master of the Mystic arts chat. 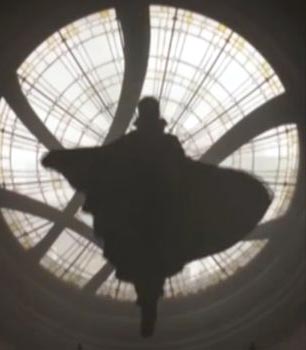 Doctor Strange sends them to Norway, where Odin stands alone on a cliffside overlooking the sea. He tells them he is dying. He warns them of Hela, his first child, former leader of his army. She was a bit too ambitious, after helping Odin conquer the Nine Realms. She wanted more. So she was banished from Asgard until the day Odin passes. He dematerializes into gold dust and drifts out over the sea and into the skies, which quickly grow dark and rumble. Enter Hela, their sister. After some bravado, Thor attacks by throwing Mjolnir at her, only to have her grab the hammer and destroy it with her bare hand. Calling Skurge for help, they begin to ride up into the cosmic transport only to have Hela in their wake. The three siblings clash in the funnel until Loki and Thor are cast out separately, allowing Hela alone to arrive in Asgard.

Thor lands it what appears to be a junkyard. With no weapon, he is overwhelmed by a group of local scavenger aliens, who in turn are taken out by a female warrior in a flying ship. She is taking Thor with her, whether he wants to go or not. She subdues Thor with an electric stun device attached to his neck and drags off with him.

Meanwhile, Hela is setting up her “birthright” in Asgard, and making Skurge her Executioner. She kills the Warriors Three and many Asgardian soldiers that stand against her. When she hears of defectors, she decides to raise her army and her Fenris wolf from the dead with the Eternal Flame.

We see someone steal Heimdall’s sword from the Bifrost gate. Later its revealed to be Heimdall, with the “defectors”, the citizens of Asgard, hidden inside a mountain.

Thor is brought to a strange planet where a being called the Grand Master reigns supreme. He governs over his Contest of Champions, pulling the most powerful from all over the cosmos, to battle each other, gladiator style, to the death. He will not be allowed to leave planet Sakaar unless he can defeat his current Champion, or die. While restrained, Thor sees Loki amongst the denizens of Sakaar. He asks him for help to escape but the ever-diabolical Loki has other plans. He also learns that the woman who captured him is an Asgardian Valkyrie, they are calling Scrapper 142. She explains that Hela killed the Valkyrior ages ago.

In the arena, the Grandmaster introduces the “Lord” of Thunder, to Thor’s chagrin. His opponent is revealed to be the Hulk. 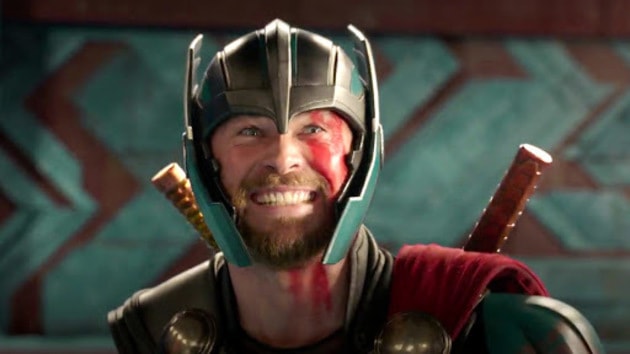 Instantly recognizing his “work friend” Thor thinks all is done, but the Hulk isn’t having it. He fights Thor, even mimicking the same move he used on Loki in the first Avengers film, much to Loki’s delight. It’s a raging battle that’s almost a standstill until Thor summons lightning to gain the upper hand. Just as he is about to be victorious, the Grandmaster intervenes by “buzzing” Thor’s neck device, shocking him, and allowing the Hulk to win the battle.

In their quarters, Thor learns that the Hulk was brought there via the Quinjet he was last seen in, at the end of Age of Ultron. Sending for 142, he tries to convince her and the Hulk to help him escape and save Asgard. 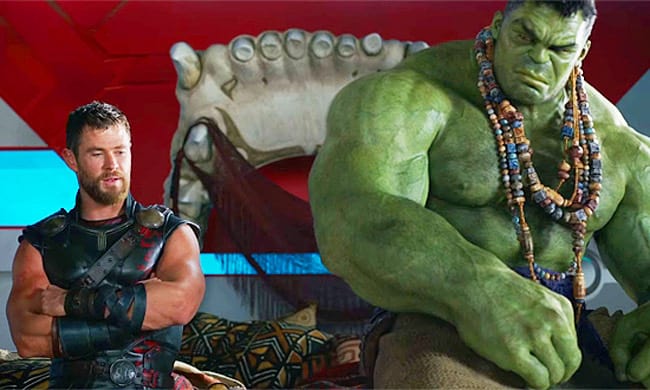 With neither budging, Thor breaks free of the quarters and makes it to the Quinjet, where the Hulk has followed. He sets off a recording of Natasha, the last he saw of her when he left Sokovia, and it triggers his transformation back to Bruce Banner. Severely confused, since he has been the Hulk for 2 years straight, and assuming the Battle of Sokovia just finished, Thor explains their situation to the frazzled scientist.

The Grandmaster sends Loki and 142 to find the Hulk and Thor but when they meet, a struggle ensues between Loki and 142, causing him to make her relive the final battle of the Valkyrior against Hela. She decides to help Thor, as does a calmed and still slightly frazzled Banner. 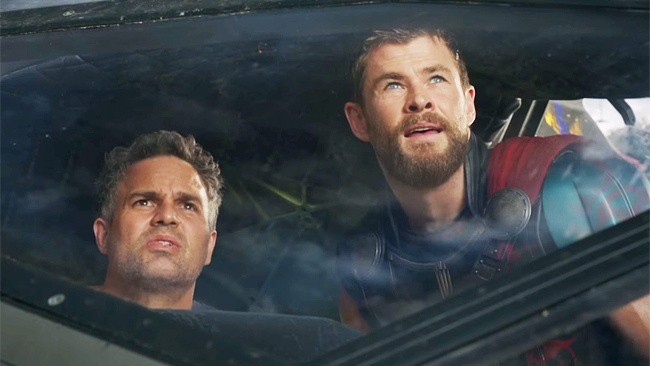 Discovering a wormhole to lead them to Agard, they make their escape from Sakaar, only to have Loki attempt to double-cross Thor again, by delivering him to the Grandmaster. Anticipating Loki’s betrayal, Thor strands him on the planet with the battle slaves they recently met and befriended. 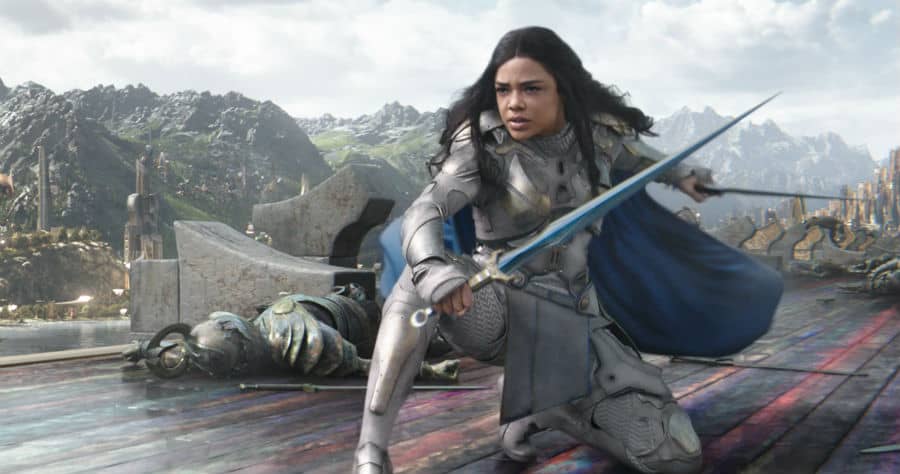 Arriving in Asgard, the heroes begin battling Hela, army, and Fenris. Banner becomes the Hulk to destroy the giant wolf, while Thor and Valkyrie battle Hela. Loki and the slave gladiators arrive in a giant barge and join the battle. Heimdall rescues the citizens of Asgard by bringing them to the large barge after Thor decides there’s only one way to end this battle. Skurge has a change of heart and allows his people to escape in the barge by sacrificing himself. 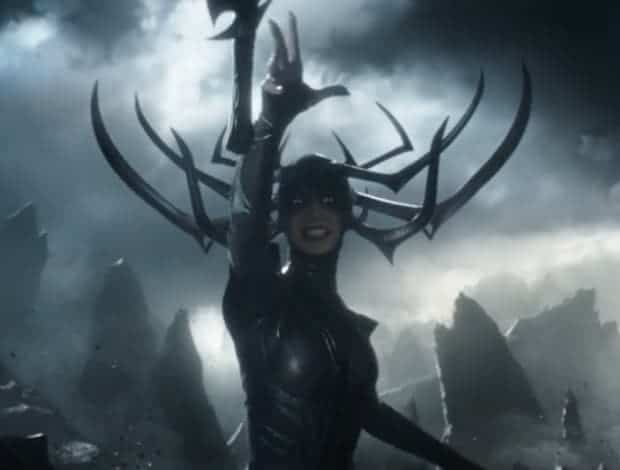 Battling Hela, Thor loses his right eye, but visions of his father Odin have helped him realize Ragnarok must happen in order to defeat Hela. With the Asgardians and his friends aboard the ship, Loki finds Surtur’s crown and places it on the eternal flame.

Surtur is reborn, more powerful than ever, and begins destroying Asgard, and everything in it, including Hela.

With his people saved and now being declared King, Thor commands the vessel to fly to Earth.

MID-CREDITS SCENE: Thor’s sail barge suddenly comes face to face with a spacecraft that dwarfs their own.
POST-CREDITS SCENE: The Grandmaster falls into a heap in the cosmic junkyard, right at the feet of some of his rebellious former subjects.

What Does This Mean for the Future?
That big ship at the end seems like bad news. But we won’t have to wait long to find out with Avengers: Infinity War hitting theaters in 6 months, May 4th, 2018. The 17th film in the Marvel Cinematic Universe, they continue to test waters and explore new palettes with a grandeur that can only be described as comic-books-come-to-life. Scenes I never thought I’d see on film are right there, in front of my eyes on the big screen. Now let’s be clear. I’ve learned how to go into a film without any expectations. I don’t allow my inner fanboy to blow a gasket over differences between the comics and films. Marvel has their brand CLEAR for all to see: Marvel CINEMATIC Universe. An alternate telling of the source material through a different artistic medium. I feel the reason Marvel Studios has been so successful is that they have stayed so true to the spirit of the source material. They have become the juggernaut of the film genre.

That being said, let me get the negative out of the way. Some of the pacing of this film could have been better. There were times I felt a beat was either missed or skipped ahead, some scenes seemed too long while others seemed too short.

I found the humor to be quite organic from the characters. Thor and The Hulk’s rivalry, so well received in the first Avengers film, with just one scene, is played great here. There’s been just as much humor in Avengers comics over the years. Again, it’s a different medium, an alternate universe. I can enjoy both!

The vivid colors, reminiscent of what we saw in Guardians of the Galaxy, continues to play a prominent role in our perception of this shared universe. Yeah, its a dirty universe out there but color is not lost on blue tint filters.

The soundtrack is ignited with Immigrant Song by Led Zeppelin. GoTG director James Gunn hit the jackpot by adding classic hits to his franchise, and I’m glad to see other MCU films utilize classic pop/rock hits, even sparingly, in this fashion. (I especially loved the nod to Willy Wonka and the Chocolate Factory!)

Chris Hemsworth is as charming as ever as Thor. Tom Hiddleston takes a back seat in villainy this go-round, but his moments on screen are always fun. Idris Elba is given much more to do this time, and I’m glad because I think he is one of the more underused characters in the MCU, but I think it’s just because his character, by nature, plays a more static role. But with the fall of Asgard, his role has now changed. Karl Urban and Sir Anthony Hopkins both personify their roles as Skurge and Odin respectively. I really enjoyed Tessa Thompson as Valkyrie and look forward to seeing more of her. Jeff Goldblum is perfect as the hedonistic Grandmaster. Mark Ruffalo’s Bruce Banner plays so well in a team-up film. I wouldn’t mind seeing him and She-Hulk in a film! And finally, Cate Blanchett, as the deliciously evil villain we’ve yearned for in a Marvel Film. She eats up and spits out every scene she is in. So thrilling to see a character, whose visual design has always been one of my favorites, so well interpreted on screen.

This film places our hero in an assumed predicament at the end. Even though we will find out what happens next in Avengers: Infinity War, I wouldn’t mind seeing another Thor Team-Up film sometime in the future.

Rating: 8.5/10
Final Thought:
The most entertaining of the series, Thor: Ragnarok is quite different due to the big risks Director Taika Waititi takes. They pay off well. Go see this roller-coaster ride! There are plenty of easter eggs for comic fans to drool over as well. Relax and enjoy this fun and action-packed film.