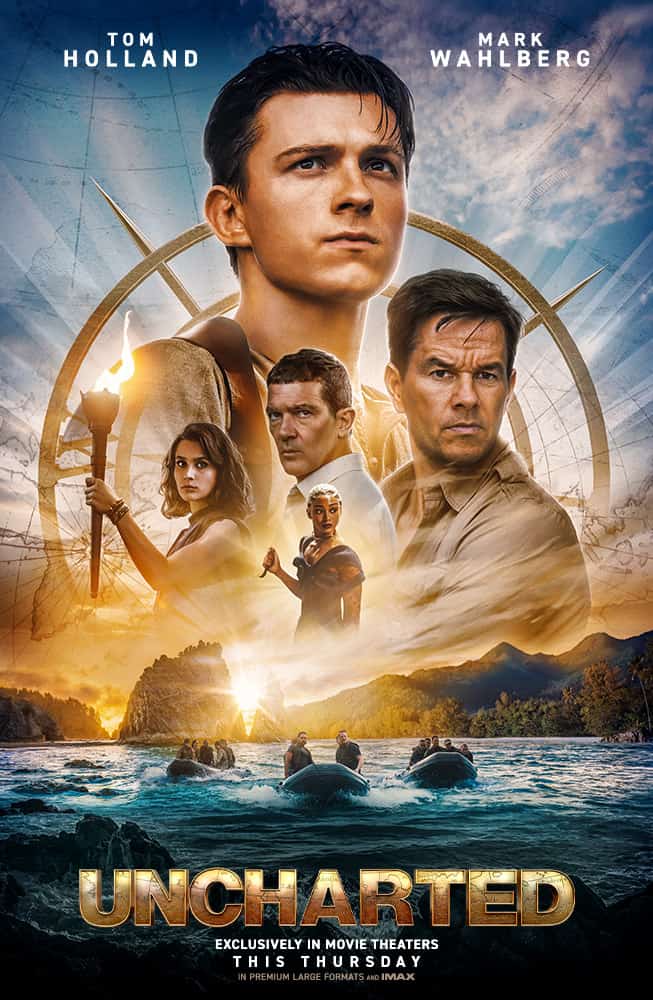 Street-smart Nathan Drake (Tom Holland) is recruited by seasoned treasure hunter Victor “Sully” Sullivan (Mark Wahlberg) to recover a fortune amassed by Ferdinand Magellan and lost 500 years ago by the House of Moncada. What starts as a heist job for the duo becomes a globe-trotting, white-knuckle race to reach the prize before the ruthless Santiago Moncada (Antonio Banderas), who believes he and his family are the rightful heirs. If Nate and Sully can decipher the clues and solve one of the world’s oldest mysteries, they stand to find $5 billion in treasure and perhaps even Nate’s long-lost brother...but only if they can learn to work together.

When it comes to movies based on video games, the genre has always struggled. At best, it has seen some mild success (the most successful being Resident Evil), whereas others have been deemed a failure that most of us would rather forget existed (Nintendo has been reluctant to make another movie based on their properties because of the disappointment of Super Mario Bros.).

Growing up in the ’90s, I had the awesome experience of growing up in a pinnacle time where video games were in (mostly) everyone’s household and being able to see your favorite games come to life on the big screen. However, watching Uncharted was the first time I watched a movie based on a video game that I never played before. So truly, going into the movie, I knew nothing about it other than watching a clip of a trailer where Tom Holland’s Nathan Drake is falling out of a plane. So I had the unique experience of being able to review Uncharted based solely on its cinematic performance and not with the prior knowledge of the characters or stories from the game.

And as a movie, it was mediocre at best. 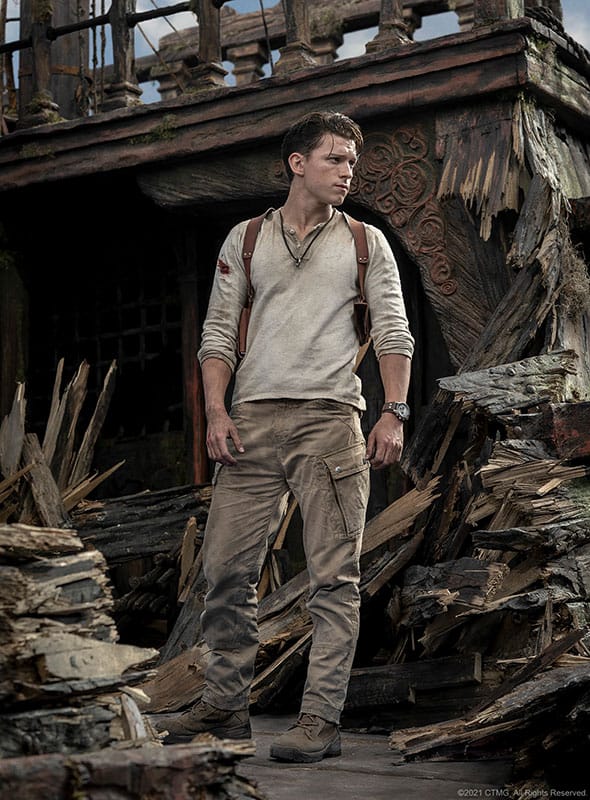 This has mostly to do with the writing, though. The performances by Holland, Wahlberg, Banderas, Ali, and Gabrielle were all fantastic. I felt like there wasn’t a moment where the acting was inferior or cringeworthy. The stunts and action scenes, although familiar and somewhat predictable, were still a lot of fun and exciting to watch. The color and composition of the film definitely meet the standard of what we expect from a Hollywood film.

So what was lacking with the writing?

For example, when Drake meets Sullivan for the first time, it sort of throws us right into Sullivan knowing who Drake is already without building up any sort of suspense or mystery as a character being introduced to the audience for the first time. We find out later how Sullivan knows him, but it was still odd how the initial meeting felt like they somehow knew each other when Drake knew nothing of him. (Sidenote – props to Fleischer who did a great job framing the scene to show that Sullivan’s arm was sticking out behind Drake to imply he was stealing from him without making it obvious. This is very difficult to do). 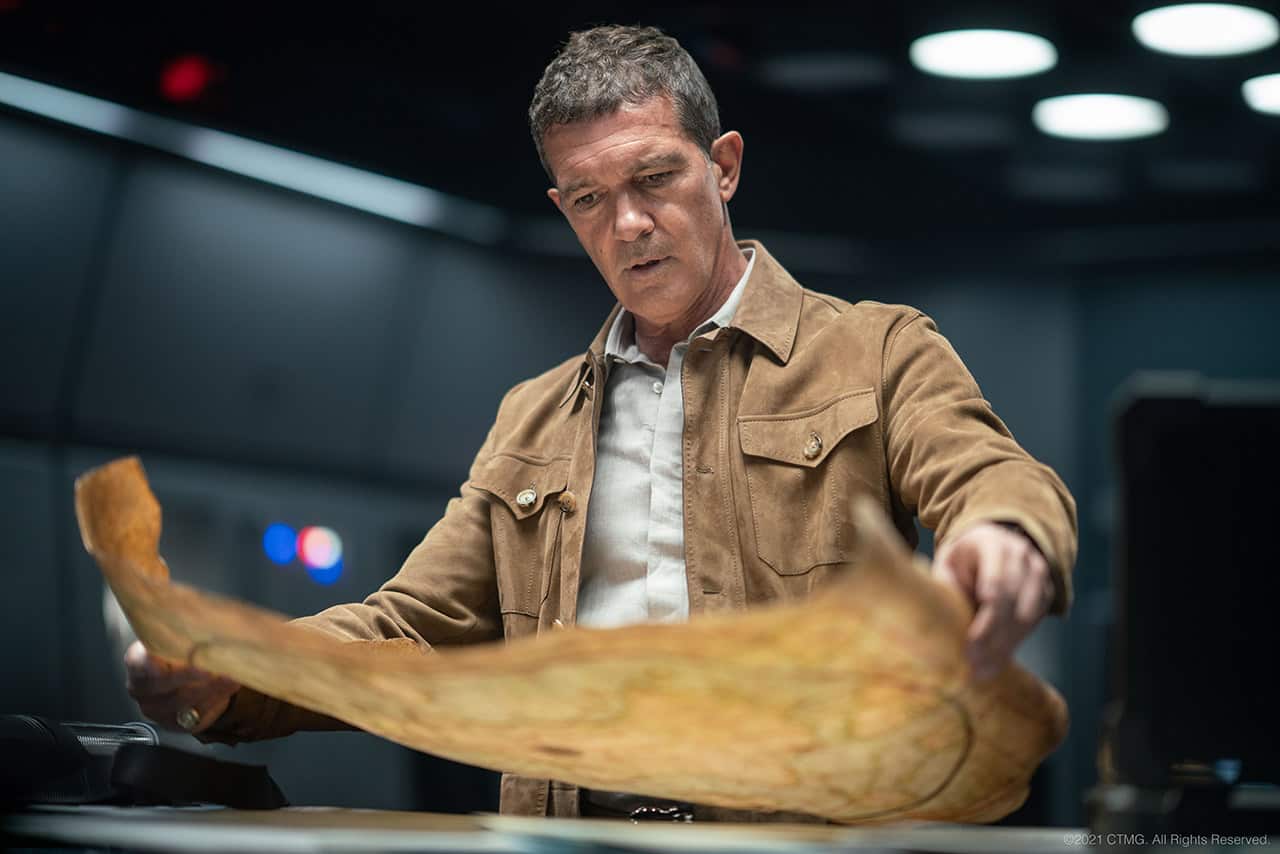 I was also unconvinced why Nathan decided to join Sullivan on his travels. Sullivan didn’t convince him to join him, even after revealing that he had worked with Drake’s brother, Sam, because Nathan seemed to have some resentment and angst against Sam never coming back out to find him after Sam left him when he was a kid. But then, because he opened up some post cards that Sam sent him a long time ago, somehow that convinced him to join Sullivan? I felt like this motivational piece was underdeveloped and was just trying to rush us to the action.

I also felt like they shortchanged some scenes for the sake of time as well. There was a scene where Drake and Chloe were trying to figure out what sort of clues Sam may have left him in the postcards. I was excited to see this scene but instead of allowing it to unfold for the audience, they edited this scene so that it implies they tried to solve it multiple ways over a long period of time and cut right to the solution scene. Maybe it was cut for time, but I thought that this could have been a perfect opportunity to highlight Drake’s skill for the audience to enjoy and experience but I was left thinking that maybe he got lucky.

In addition to all of this, we also get a lot of typical tropes that get overplayed in Hollywood which makes it feel so unoriginal. Stop me if you’ve heard this before: The main protagonists are thieves. They find that they have to work together in order to pull off a heist, but they have trust issues after stabbing each other behind their back. One of them gets called out for being selfish and only worrying about themselves then at the end they make a typical character change of giving up their prized possession to save someone’s life. 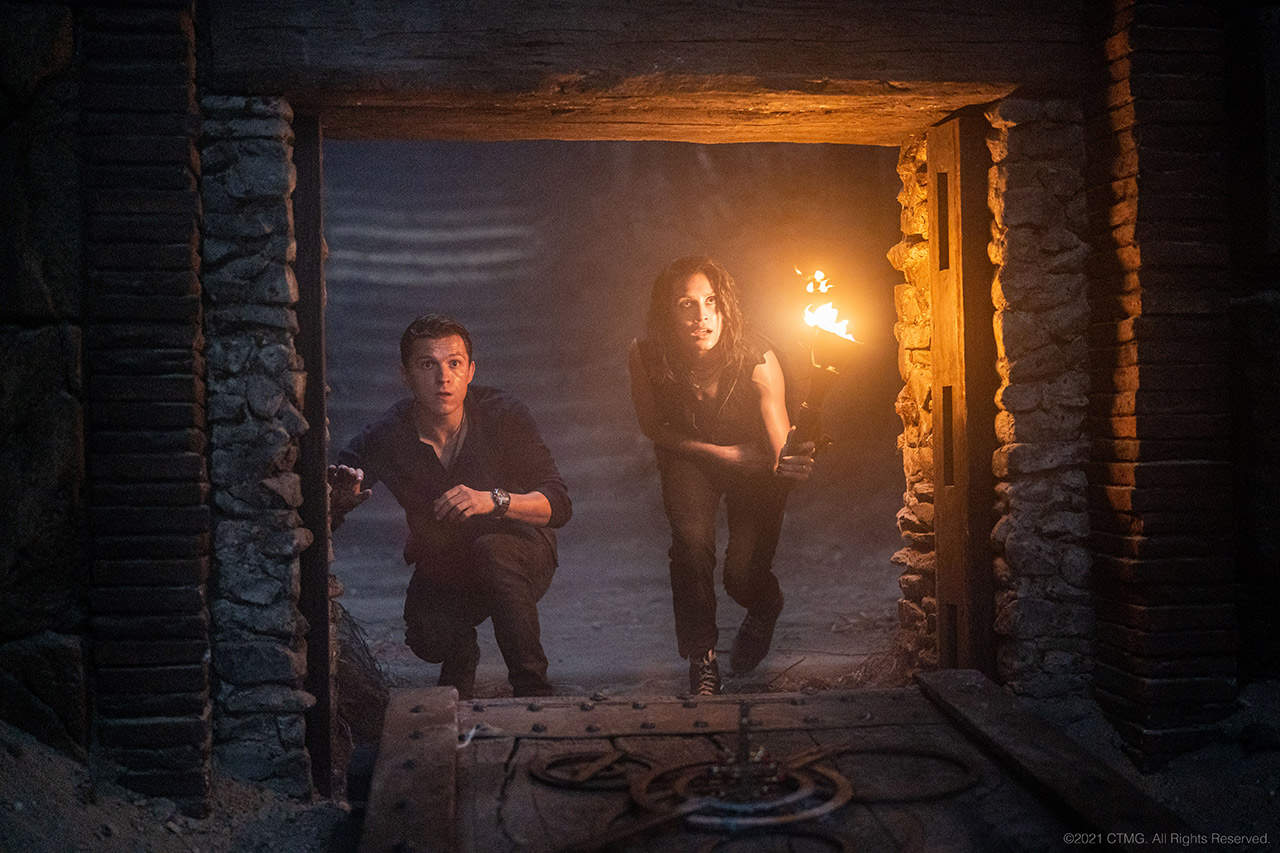 With that said, not all of the writing is bad. In fact, some of it was indeed stellar. For example, we don’t get to know too much about the original crew that left their ships and gold behind that Drake and Sullivan are looking for, but I think this actually worked out well because the story wasn’t focused on the crew but the character development of the main characters and their rivals. Sure, it may have been predictable, but it was still fun to watch and I did enjoy it.

And I will say that the pre and mid-credits scenes did make me excited that there is a second movie coming out, only because the story is mildly interesting and did leave you wanting to know what is going to happen because of the cliffhangers they left you on. So although this was not my favorite movie out there in the last few years, I’ll still watch the sequel (although I may wait for it to come to a streaming service instead of seeing it in theaters).

And I’ll go out to say this… this is not the next Indiana Jones series. Feel free to at me on that one.

Overall, what's making this movie mildly successful is the fact that it is based on a video game. But if that wasn't part of the equation, this would be an average movie with above-average actors, action scenes, and directors.