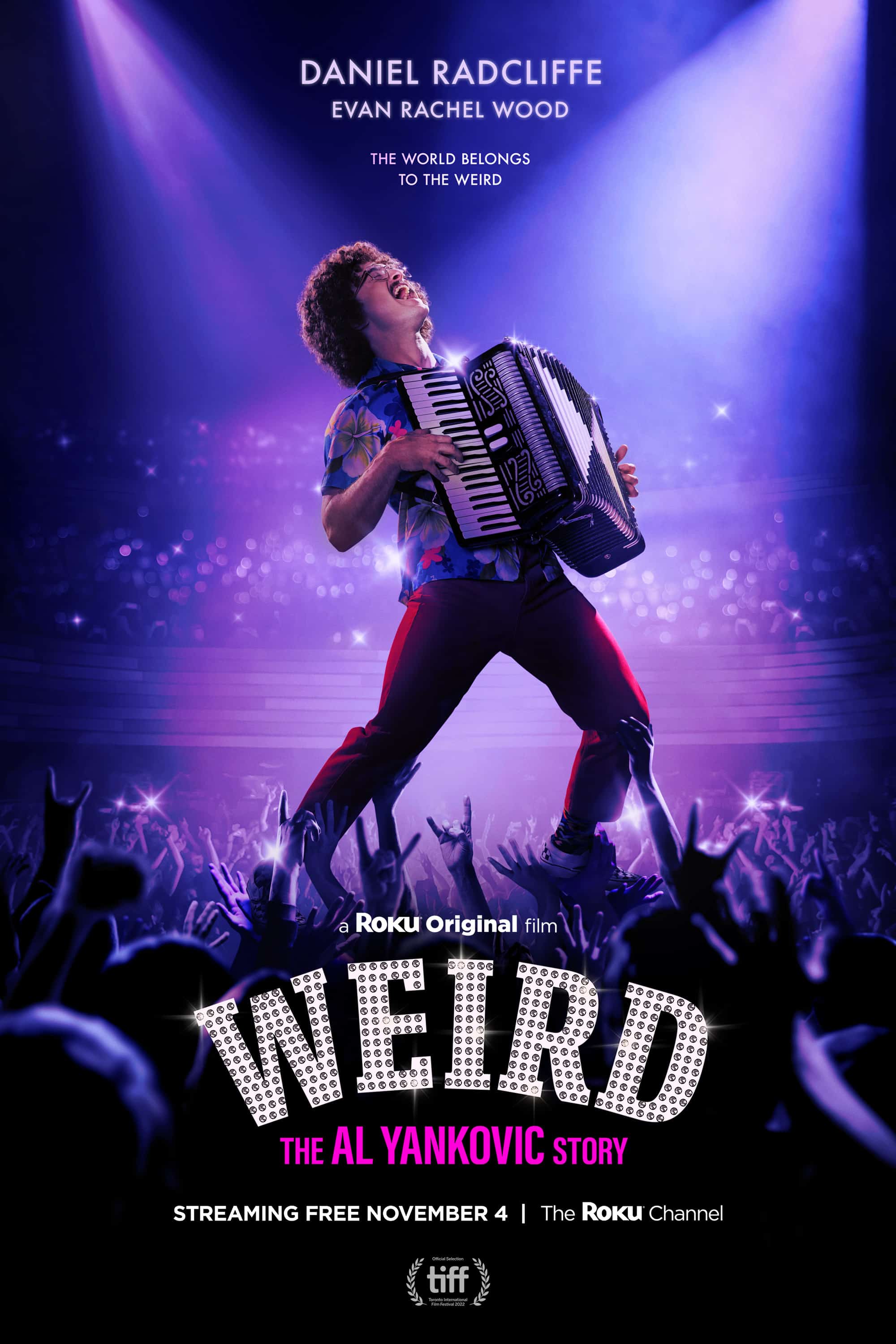 A parody of other music legend biopics, not at all based on the real life of Weird Al Yankovic.

Just like everything Weird Al does, the seemingly innocent biopic of his life, is very much a parody.  Why would we think we were getting anything less.  For those that don’t know the history of how this film came about, it all started in 2010, when parody website “Funny or Die” made a 3 minute long trailer for a nonexistent film based on the life of Weird Al Yankovic starring Aaron Paul as Al and Patton Oswalt as Dr. Demento .  The real Weird Al, being the parodist that he is, loved this and would show the trailer before his concerts, which made people believe that this was a real film coming or at least gave them hope that such a film was in production.  This caused Yankovic to consider making the actual film and collaborated with the original author of the parody trailer Eric Appel in writing the script. The part of Weird Al was offered to Daniel Radcliff of Harry Potter fame, who almost turned it down, thinking he was not physically similar enough to the real Al.  But after reading the script and realizing this was not a true “Biopic” he signed on.  This was enough for Roku to greenlight the production.  The film was made for a measly 8 million and was filmed over a two week period.  The original cast of the film saw Patton Oswalt returning to the Dr. Demento role, but unfortunately he broke his foot right before filming and Rainn Wilson was a last minute replacement. Patton is still in the film as a heckler at a dive bar. Aaron Paul was supposed to make an appearance as well, but contracted Covid-19 right before filming and with the tight schedule they were not able to keep him in the film, but he is given a special thanks in the credits.  The cast is also chock full of other well known actors like Jack Black as Wolfman Jack, Conon O’Brien as Andy Warhol, Lin-Manuel Miranda as an ER doctor, Seth Green as a radio DJ, Josh Groban as a waiter and Evan Rachel Wood as Madonna.  Elijah Wood also had a guest appearance as Phil Collins, but his scene was cut from the final production. Weird Al, himself, appears as Tony Scotti the president of Scotti Brothers Records.

The plot is your basic biopic format.  Alfred Yankovic, a child who idolizes Dr. Demento and comes from an abusive home, with parents that don’t want him to be who he truly is and try and fail to make him follow his father’s footsteps.  Once free of their control, Alfred tells his roommates that all he wants to do is write new lyrics to songs that already exist and when they challenge him to do so while making sandwiches, he comes up with “My Bologna” a parody of My Sharona by The Knack.  Within minutes of sending this to a radio station, it becomes an overnight hit.  Needing live performance exposure to get a record deal, Al and his friends play a biker dive bar where Dr. Demento just happens to be having a relaxing beverage.  Demento takes Al under his wings and creates the connections he needs to become the most popular musician that there ever was.  But the evil Madonna seduces Al hoping to use his parodies for her own financial gain.  Her influence over Al drives a stake between him, Dr. Demento and his best friends. But once he learns the truth about Madonna, their relationship comes to an abrupt end.   Hitting rock bottom causes Al to reconcile with his father and mother and he finally learns why his father was always so hard on him.  Inspiring him to write one of his most popular songs.  But Madonna isn’t done with him yet, and her presence creates the tragic edge that all good biopics must have. 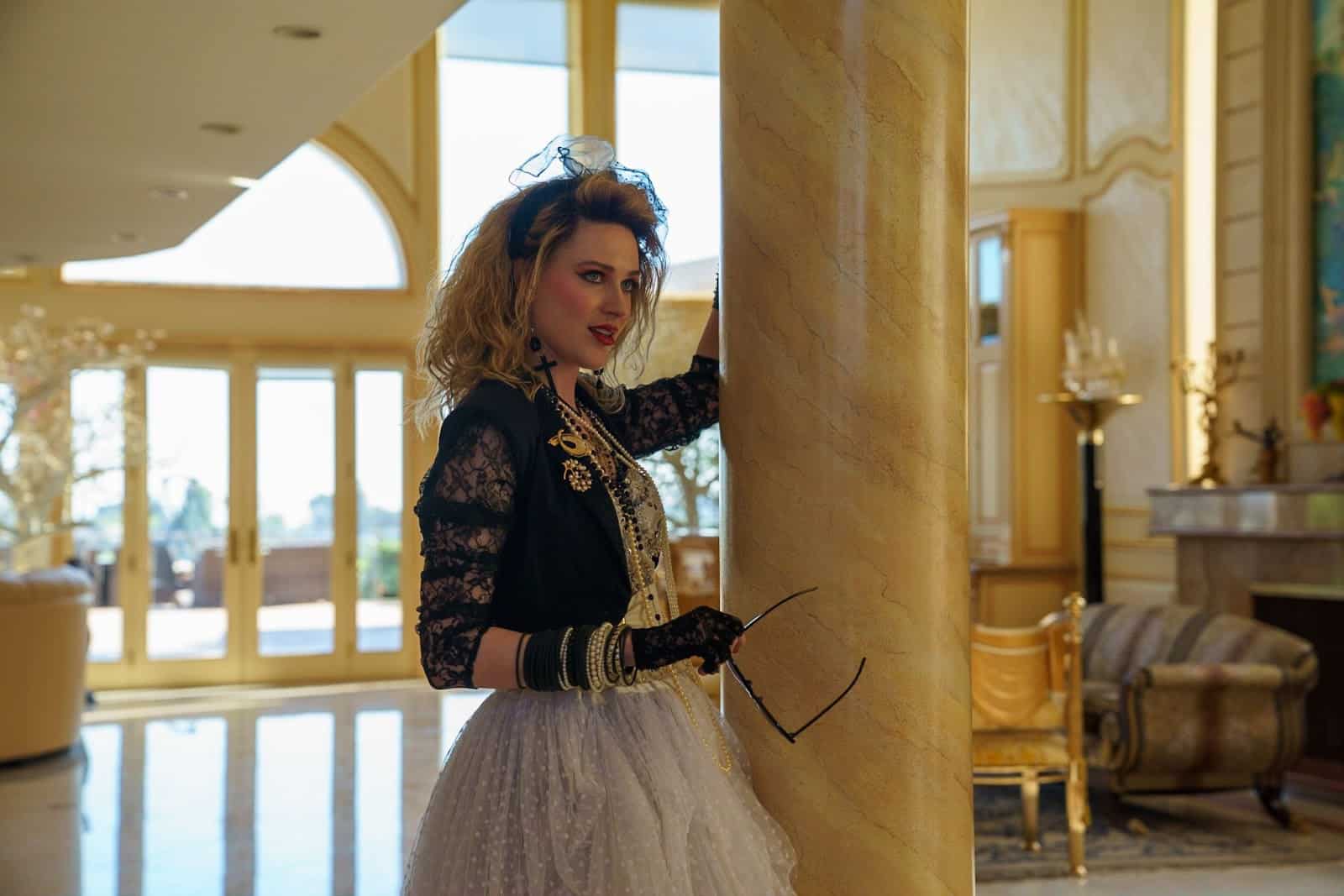 With all the star power in this movie, I am really shocked that it was made for a budget of 8 million, some of these names had to be doing this just for fun and were not paid.  The use of dramatic actors in many parts adds to the humor of the film but also a sense of credibility.  Daniel Radcliffe, although physically very different than Weird Al, does a great job embodying his spirit.  Weird Al, himself, chose Daniel for this part, and I feel it paid off. I know Daniel can sing, and I was hoping that we would hear him actually sing some of the songs. And although Daniel did sing them live during the filming, they were replace with Weird Al actually singing the songs. Rainn Wilson was a last minute replacement, but he looked so much like the original Dr. Demento and did a great job acting as the true father figure to the fictional Al, that I have a hard time picturing Patton Oswalt in the part.  The script is clever and witty and the storyline takes the normal biographical tropes and makes them absurd, taking the ordinary and making it extraordinary.  This parody is not a laugh out loud funny type of movie, but I chuckled through most of it and really enjoyed the subtle and the not so subtle absurdist humor throughout the film.

A fun parody playing on the tropes seen in so many music legend biographical films.  Some great performances and a lot of good chuckles along the way.