Zombieland 2 Double Tap: A Return to All You Loved the First Time

The sequel to 2009’s Zombieland has been a long time coming, but it’s worth the wait. Mostly.

Whereas the first movie entered cinemas as a refreshing change of pace compared to the other horror movies that took themselves too seriously, this second entry often seems a rehash. Irreverent humor and horror go together perfectly to create great dark comedies. However, the freshness of that humor from part one is often just redone here and feels forced. Regardless, we all loved the first movie, right? So, seeing the characters we loved come back and do the same humor again is still a win!

Woody Harrelson is back as Tallahassee, the grumpy redneck with a heart of gold. Jesse Eisenberg is back as Columbus, the super awkward and nervous geek surviving thanks to his rules for living through the zombie apocalypse. Emma Stone and Abigail Breslin are back as well. They once more play Wichita and Little Rock, the distrusting sisters that are tough as nails and don’t need anyone, but also love the goofy duo of Woody and Jesse.

The amazing fast-paced direction and effects are back too. The effects of Zombieland are always creative and fun. Even the beginning credits, as with the first movie, are a part of the action. Names themselves get knocked around on screen by zombies during the initial battle scene. Jesse’s rules show up as part of the scenery when applicable to the action, also again.

All the old stuff is back.

Even though the story and jokes are similar, it’s no less fun. Sequels are meant to bring back the old and build on it. Zombieland Double Tap does that, but some of the additions aren’t the best. While Zombieland was a comedy, it was a horror comedy. Truly, it was a horror movie, just with funny people. There wasn’t any pure silliness. In this second one, though, the additional characters are often sillier than they should be.

Zoey Deutch’s Madison character is extremely stupid. So much so, that the character is often more annoying than she is funny. The same can be said for Berkeley, the extreme hippy pacifist. Additionally, the one-note joke of Luke Wilson and Thomas Middleditch acting identical to Woody and Jesse was just that, a one-note joke. Luckily, it was a short-lived one. Rosario Dawson’s new character, Nevada, was the best of the new additions. She was exciting and tough. However, Woody started the city name theme in part one when he met Jesse. He didn’t want to bother learning someone’s name who he didn’t expect to be around long. That theme, throughout the first movie, made sense. Every new character showing up with a city or state name in this one, though, rang false. Not everyone would have developed that same naming convention. You would also assume the main four would have bothered to learn each other’s real names at this point. Changing the names of the originals may have been asking too much, but it was weird that all the new characters had city names too. 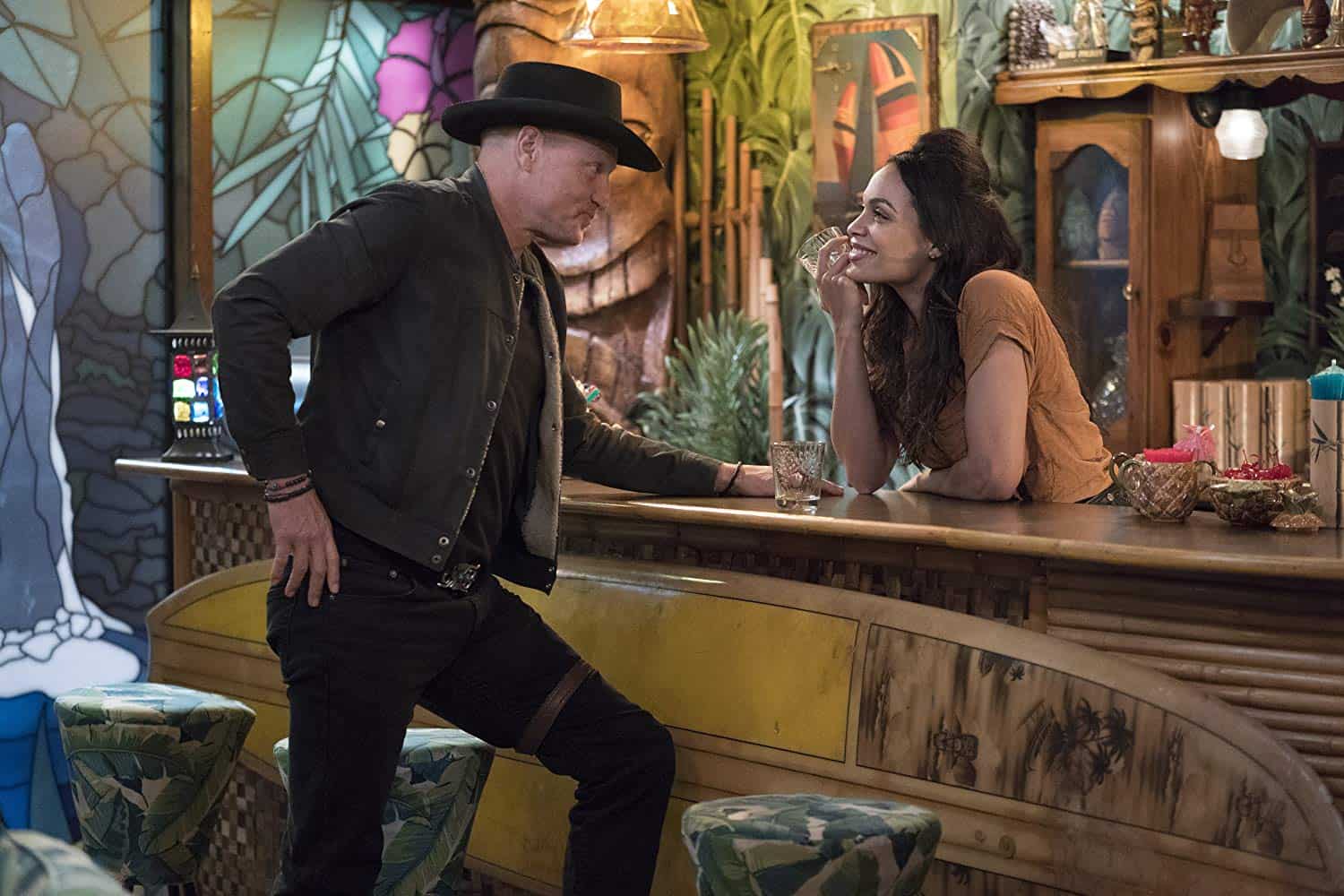 The plot of this entry gets rolling after the sisters, once again, cut and run from our dynamic duo leads. Breslin wants to meet people her own age, while Stone just continues to be afraid of commitment. This rang a bit odd since she and Jesse had been together for six years in the catchup summary of all that had occurred since the first movie. Unfortunately for Stone, Breslin does the same vanishing act on her as well and runs off into the unknown with a hippy that doesn’t even believe in fighting against zombies.

Naturally, Stone goes back to get Woody and Jesse to help go in search of her missing sister. Action ensues as our heroes fight zombie after zombie to get across country from DC to Memphis and beyond. Only zombies are, for some never explained reason, getting stronger. Destroying their brains doesn’t easily stop them anymore, even with a double tap. These new, stronger zombies are referred to as T-800s, as in Arnold Schwarzenegger’s Terminator model. The stakes, then, have been raised.

There were odd choices made with character and plot, and much of the humor seemed a forced rehash of what had been fresh concepts in the first movie. However, the characters are still lovable. The humor is still funny, mostly. The movie is still entertaining. The effects still amazing. The horror still edge-of-your-seat!

Also, be sure to stay in your seats for an incredible after credits scene with none other than Bill Murray. It’s a flashback of course.

Here’s hoping for a Zombieland 3: Triple Tap or whatever it may be called. Zombieland Double Tap was left wide open at the end, since the growing problem of stronger, nearly unstoppable zombies was neither explained nor resolved. Besides that, I’m sure audiences would love to see the lovable, rag tag group of survivors once again, even if they do bring back the same jokes. Only, this time, I hope we don’t have to wait another 10 years.

Zombieland 2: Double Tap – A Return to All You Loved the First Time