A Black Mermaid on Vacation

1943’s The Mermaid in Central Park, the feature story in Wow Comics #15, sees child superheroine, Mary Marvel, encounter a mermaid on vacation, and the men who get greedy as soon as they see her. A thirteen page comic by brothers, Jack and Otto Binder, the comic now in the public domain, though DC Comics maintains the trademark on some of the characters.

In 1943, deep in the Second World War, America was ready! Ready for a black mermaid!

Prominent gangster, Caesar “Czar” Moxie, is out with two cronies, planning his election was Mayor of New York City, when he hears the melodious singing of Lorelai, and logically deduces that any woman playing the harp and singing in a park must need him to yell at her. This is a long, long tradition, which Lorelai seems to have happily missed out on before: Mermaid makes music, guy hears it, guy assumes it beckons him, guy… well, usually the guy dies.

Lorelai does not murder Czar Moxie and his friends, but she does make them jump in the water, then tells them, because she is just enjoying a park on her vacation, “Now go, ugly ones! I want to come my hair!” 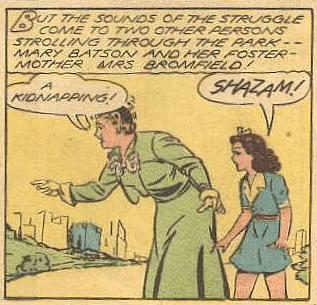 Our enterprising fellows declare they won’t go, and kidnap Lorelai and tricks her into attempt killing Moxie’s political rivals. Only the speed and timeliness of Mary Marvel saves each candidate as they plunge, hypnotized, to their almost certain death.

When Mary and Lorelai finally meet, Lorelai asks if “Even you – a girl – [is] lured by my magic music?” and Mary Marvel tells her she just wants her to stop hurting people for Moxie.

“But what about,” asks Mary Marvel, “all those sailors you shipwrecked according to legend!”

Lorelai replies, “It isn’t true – not a word of it! I only lured ships close to me – and away from the shoals and reefs!” 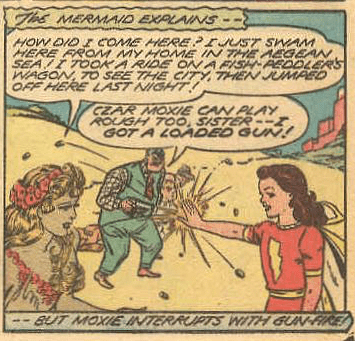 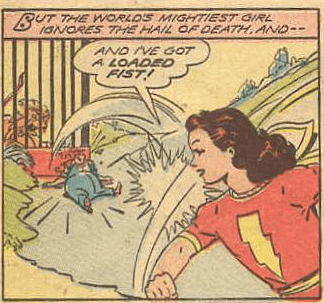 The brilliant juxtaposition of highly cartooned characters with more realistic figure work, lends the comic a friendliness and timelessness. This is undoubtedly a kids’ comic, aimed at children before adults, but accessible in that way, we often call, “family”. Lorelai’s dark skin, which today would be met, as black mermaids are, with an outcry by racists who don’t want to be referred to as racist, goes unaddressed.

What are they going to do? Shout, “A mermaid! A black mermaid!”?

The twist on old myths, that it is greedy and presumptuous men, not the siren on the rocks singing her song, are the ones in the wrong, would also find itself under criticism, today, for being “social justice warrior pap” or “a trick,” to sucker people into thinking they like things.

“Strange,” writes Mary Marvel in her Good Deed Book, “how legends are twisted about through time.”

As, modern audiences stand poised in excitement or distress over the casting of yet another film adaptation of The Little Mermaid, in 1943, a black, misunderstood mermaid dealing with presumptuous men and men who blame women for just about anything was a casually accepted children’s story.

A Black Mermaid on Vacation