Rogue is the one day superhero name of Anna Marie, a teenage girl with the power to leach energy from other living beings through skin to skin contact, during which she also absorbs their memories, their feelings, their attributes. Alisa Kwitney’s Rogue: Untouched explores Rogue’s formative years with a careful, fun hand, walking Anna Marie, who will be called a Rogue Specimen, and us, the readers, along her journey to the beginnings of adulthood. 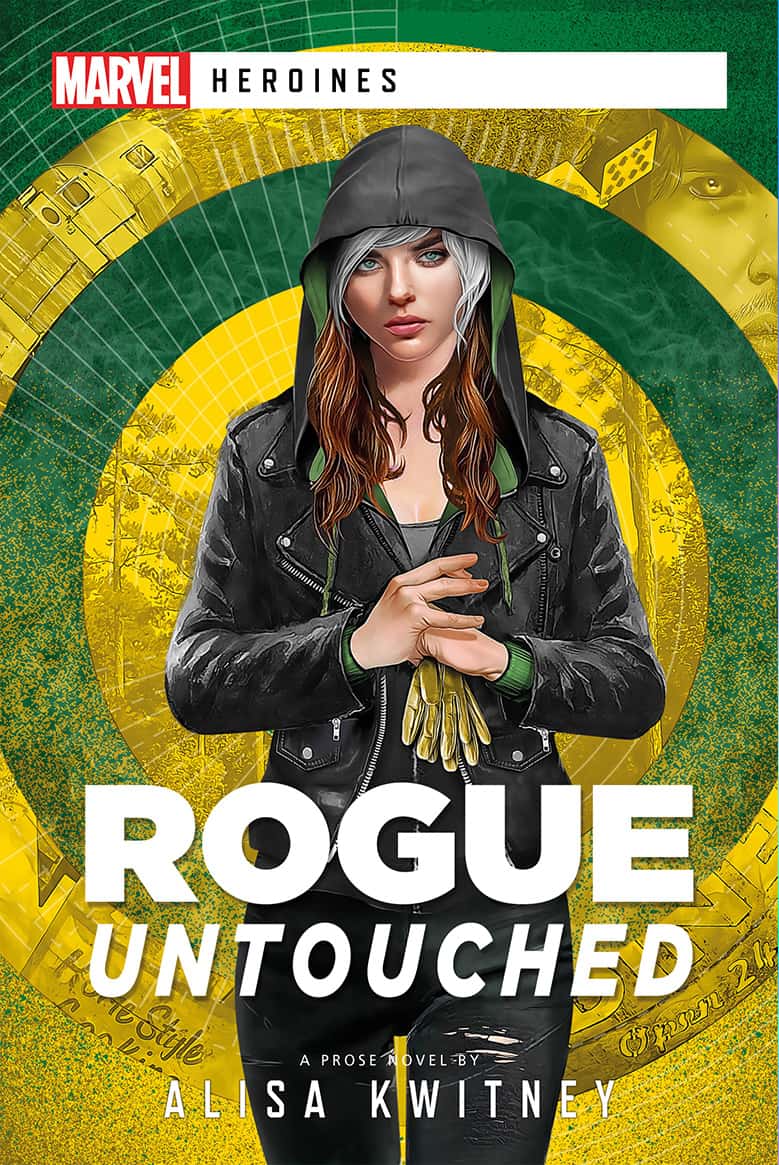 Kwitney’s prose never breaks contact, at times a firm hand holding onto us, sometimes only a finger touch or a body pushing beside us to mark its space. Rogue: Untouched is an intimate novel, more charming than convivial, and always less maudlin than a confessional. It is a wonderful romance, both in the sense that most good novels are romance novels, and in that it contains the more winning aspects of Heather MacAllister or William Shakespeare;  you feel won over. Not seduced. Not conned. Not glad-handed or forced together by circumstances. Reader and the reading simply and delightfully seem to effortlessly come together.

There is a maturation in Untouched, a cyclical reaffirmation of being as Rogue attempts to understand herself and her place, while not exactly capable of admitting she has a self and a place. It reminds me much more of Marjorie Liu’s Dirk & Steele novels or Julie Kenner’s Protector series, than earlier Rogue-centric novels and comics, like Christine Woodward’s Rogue Touch, her solo run by the Robert Rodi and Cliff Richards, or the Rogue & Gambit newlyweds comic, Mrs & Mrs X, by Kelly Thompson, Jan Bazaldua and Javier Pina. Those are excellent works, too, but they all operate on a blame-first drive and hinge on proving Rogue is a character worth telling stories about. The narrative of Untouched has nothing to prove, and the character(s) having something to prove is not treated as a note, a gap to fill, a reason to explain away.

So, if Untouched is not like the other Rogue stories, what is it? Untouched is situational. What is always of paramount concern, is Rogue’s circumstance. How she is perceived affects not only those perceiving, but the feelings and situation of Rogue, herself. Somewhat communally raised, in that small town style, the empathy and rigidity which Rogue is bounded and rebounded by every day is as shaping as the tawdry, the forgetful, the spite or viciousness that erupts from the boiling-over characters she knows too well, and Remy, the boy she does not.

A perfect and humane, empathetic, introduction to Rogue, and to Remy, and to other characters you may recognize under other super names, Untouched is also a wealth of novelty for the seasoned Rogue fan. Staying with the character while she is still fairly young, we see interactions normally pushed off into two panel flashbacks at best, and her motivation and interests here are unique, understandable, and personable. Rogue’s interest in CIA and FBI techniques, in being a spy – a coupling of disguise and knowingness – of, even, being a superhero spy, like Black Widow, is simultaneously naive and the route to her maturation.

The sexuality of the novel is neither garish nor gauche, a thankfully earnest and articulate examination. Both the mutant metaphor more broadly and Rogue’s specific mutation become obviously in tandem with puberty, exploring basic, modern American social anxieties, body issues, and gender disparities. In many ways, Remy (the later X-Man, Gambit), is what Rogue could be, if girls were allowed to. Which, considering how rough his life can be, is not necessarily fantastic as a goal, but it is simply denied to our protagonist. There is no point, in the novel, that she is unaware of how being a girl is shaping and directing her life, and directing the reactions and understandings of those around her.

There is just so much energy in Untouched, so much love. Rogue is unsure, but it never feels the author is. The prose, the narrative, the earnestness drive ever forward, ever strong, always charming and present and strong.