An Ode to Prince: an interview with MPLS SOUND’s Joseph Illidge, Hannibal Tabu, and Meredith Laxton!

MPLS SOUND, the graphic novel that is the ultimate love letter to the Purple One, Prince, is out now at your local comic shops and favorite digital platforms. We were lucky enough to speak to the creators of this amazing book, so check below for the full interview of Joseph Illidge, Hannibal Tabu, and Meredith Baxter! 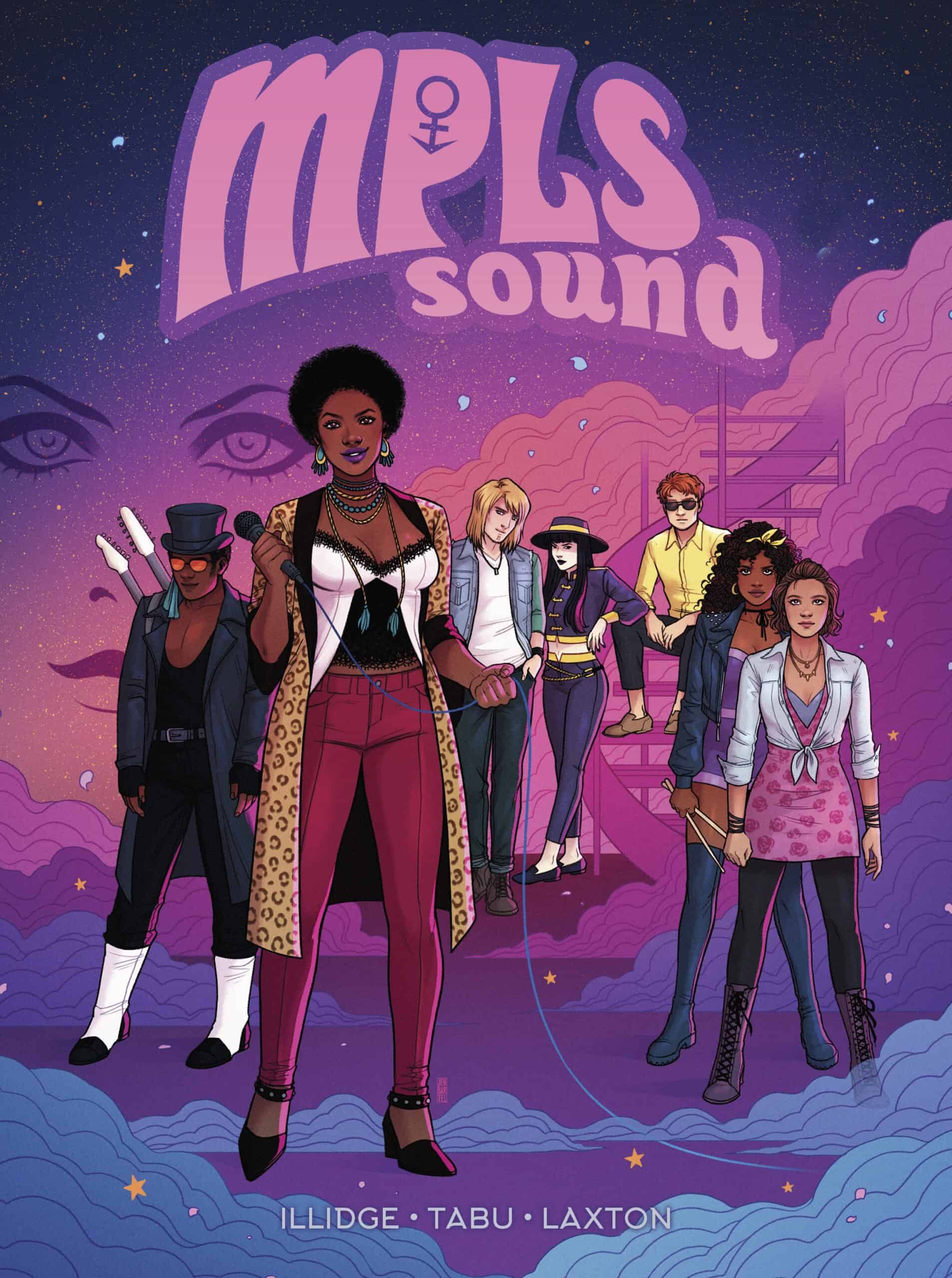 CW: As a baby in the 80’s, you couldn’t help but enjoy, or be affected by the music from the Purple One, or artists he molded/influenced. From Chaka Khan, to Sìnead O’Connor, to the Bangles, or the Time. How did you two meet? What about Prince that made him the character that would be the inspiration for Theresa, and the rest of the StarChild cast?

HT: I think we met when a group of Black comics creators were debating putting together a publishing concern, one that never bore fruit. The group of creators wanted someone we all respected and someone who knew what they were doing more than any of us, and there were some all-star, high level creators here. Joe was the only name everybody could agree to, the only name on the list. While the project fell victim to schedules more than anything malicious, Joe and I came to know and I hope, respect each other.

As for Prince, he was a guiding star for so many Black kids stuck in boring midwestern towns with ideas that were too big for their environments. Andre 3000. Janelle Monae. People like them saw this wildness and said, “I can do that.”

JI: I was a teenager in the Eighties, and Prince was definitely a part of my life’s soundtrack at that time. He was an icon of vitality and sexual magnetism in ways I didn’t even understand at the time. Hannibal and I have known each other for over a decade through our adventures in the comic book industry, and his critical thoughts on media were on my radar even before that.

Everything about Prince made him the character that would inspire Theresa Booker, the bandleader of Starchild. One quality is certainly Prince’s determination. His success was in defiance of the musical industry of Minneapolis at that time, so the personal fortitude to keep getting back up, keep getting back on stage, keep things moving…that’s Theresa’s fire, and her fire ignites the rest of StarChild. She becomes the beacon for their fight.

CW: You’ve been at the forefront for increasing minority presence in comics since the 90’s with Milestone Comics, not only on the pages, but also creatively. What would be your advice to upcoming creators on how to break into the industry?

JI: My advice to creators from diverse backgrounds wanting to break into the comic book industry would be to do comics NOT to break into the industry, but to tell the stores you want and NEED to tell. Do that consistently, with a perspective that is uniquely yours. Figure out the best method for distribution that works for you, be it through your own website or crowdfunding.

Think about promotion of your work, for the audience to have awareness of your stories.

Read the interviews of people who have succeeded in accomplishing what you envision for your comic book career, and don’t be afraid to ask someone a question for advice.

Tabu: You’re a published poet, have 20 years experience in journalism, and you’re an accomplished graphic and web designer, what drew you into comics?

HT: In the early 2000s, I worked at a website called NextPlanetOver. We needed an editor to create content, and the guy who got hired was Eric Stephenson. Eric asked me to start reviewing comics for the site, since I’d done reviews for MTV and the Source and Vibe. I started to like the weekly grind of it, and followed him when NPO went down and he started an indie site called Spinner Rack. Some years later, Eric referred me to Jonah Weiland, and I got a job at Comic Book Resources covering comic book adaptations. That led to some degree of notoriety, which all came together in winning the 2012 Top Cow Talent Hunt and I’ve been writing comics professionally ever since. Eric is like my guardian angel in comics who got me going and I will never hide my gratitude for him asking, “You ever think about writing comics?” 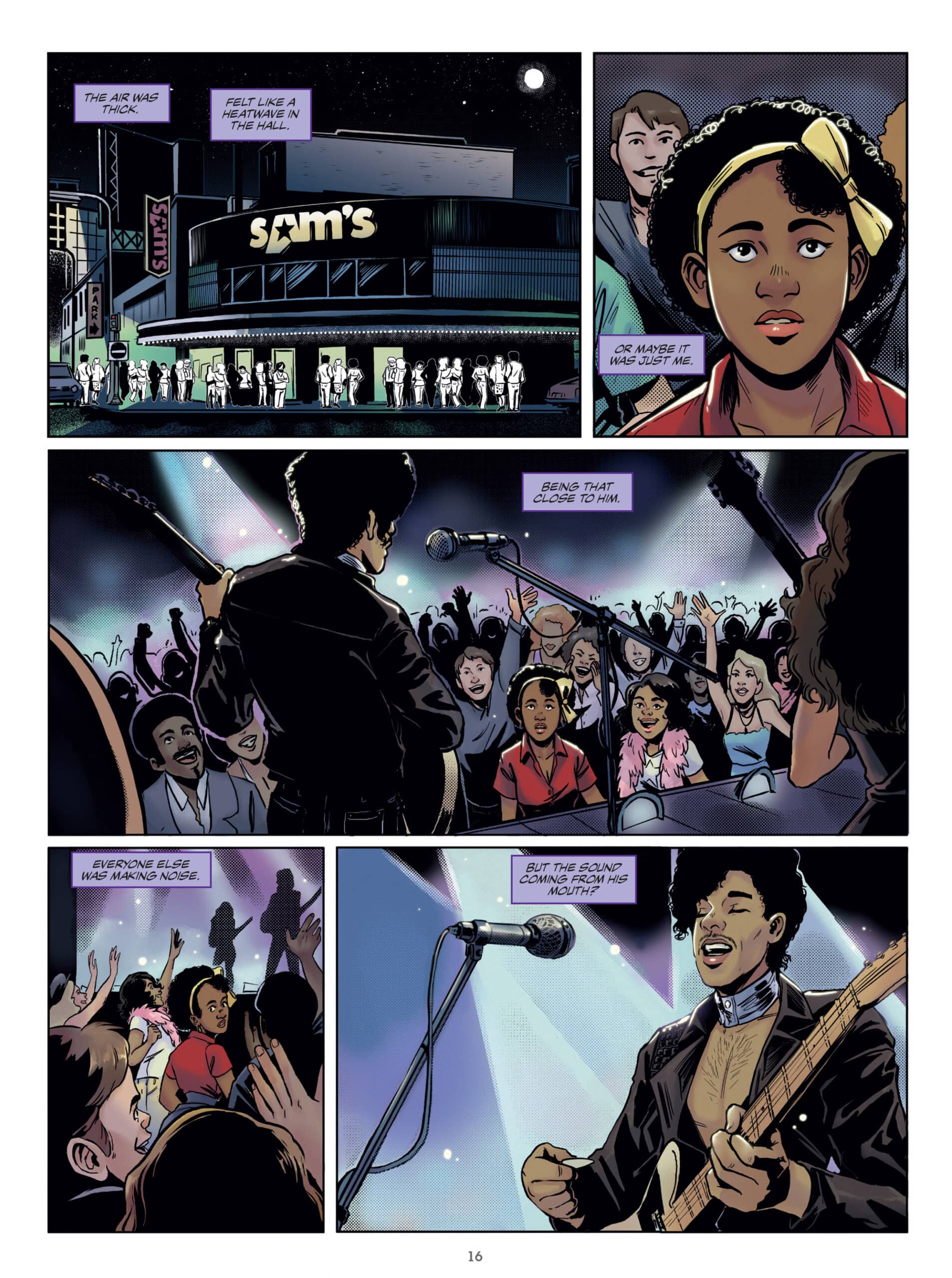 CW: Who were your inspirations for this cast? Was there anyone in particular for either of you that inspired Theresa?

JI: Both Theresa Booker and Violet Delgard, Prince’s right-hand woman in this story, are inspired by different aspects of Prince. Violet can interact with Theresa in ways that Prince cannot because he’s a mysterious supernova, and their mutual Purple qualities provide a kind of steamy energy when they’re both in the same scene.

For Starchild, part of the idea was emulating the model of The Revolution. In the timeline of this secret history, we’re suggesting that Prince’s choices for The Revolution were inspired by his experiences with Starchild.

HT: In the early 1990s I worked at a company called Image Magazine, and there was an editor there named Theresa. The Theresa in this book is not an editor, but is very much inspired by that woman, from skin tone to mannerisms on down. When I thought about some of the things Theresa I knew had said about colorism, and thought about similar ideas Brown Mark put out regarding his relationship with Prince, the core of the character started to come together.

How would you describe working with each other, and how the others approach writing serialized fiction compared to your own?

JI: I came on board after Hannibal laid down the spiritual nucleus for MPLS Sound. Hannibal’s extensive understanding of music history was an inspiration in terms of my approach to incorporating real characters from the industry into the story.

It’s tough to answer how someone else’s approach to writing is different from your own, because writing is an intimate craft. I started with Theresa Booker’s journey from the street to the stars, and the theme of “ambition versus the world”. Everything and everyone in the story are either in support of, or opposition to, that theme.

HT: Joe has been doing comics professionally since I was in college, so I appreciate his understanding of how to work inside a system, how to satisfy the requirements of stakeholders and how to keep the train on the track. My intensive need for volumes of background entries on characters, even supporting ones, may not be exactly congruent with his methodology, but I think it all came out well in the end.

CW: You’re a relative newcomer to the industry, but your style is something I’d call neo-classical, as looking at your work evokes current artists like Jen Bartel, while also hardening back to more classic artists like Frank Springer, whose Dazzler was a seminal read for me. Who were some of your biggest influences?

M: Thank you so much! I was a student of Tom Lyle and learned a lot under his tutelage. In fact, Tom is the person who introduced me to Fabrice Sapolsky (the mind that sparked this project into being) and was a great mentor to me. I miss him dearly and it really saddens me that he isn’t able to see this book come to fruition. Classic comic titans aside, I have also drawn a lot of inspiration from contemporary and European comic artists as well. Sandcastle, drawn by Frederik Peeters, is one of my favorite books. I also love the storytelling styles of Jillian Tamaki and David Mazzucchelli.

CW: What was your reaction to working on this project, and where did you draw inspiration for the overall look and feel that you created for this book?

M: I kind of freaked out when I found out I would be making a book featuring Prince. Even before learning about this project, I was designing my own project with a Prince and The Revolution inspired aesthetic. I binged a lot of music videos to get an idea for the types of cinematics I should aim for and the general flashiness of early 80’s funk. And, of course, costume design was important to the stage-scenes in the book. I really wanted Theresa to explore her artistry through her wardrobe.

CW: What is your relationship in regards to working with Joseph and Hannibal?

M: For the most part, once I had the script in my hand I just kept my head down and drew pages. It was a very tunnel-visioned process for me but both writers were really supportive throughout. It was super nice to have a quick check-in occasionally to let me know that they liked the work I was putting out. Kind of like having a small cheer squad to motivate you while you’re slogging through a marathon towards the finish line.

An Ode to Prince: an interview with MPLS SOUND’s Joseph Illidge, Hannibal Tabu, and Meredith Laxton!