“Cosplay Universe,” a documentary that explores the evolution and rise of the global phenomenon known as Cosplay, the art of dressing up as a character you love, will premiere this July at Anime Expo, followed by a global theatrical release this summer via distributor Abramorama. Tickets and theater information are now available on the film’s website: https://www.cosplayuniversemovie.com/watch

Cosplay Universe celebrates the rise of the popular costuming sub-culture and explores the origin and evolution of cosplay as an art form and global community. Directed by Jonathan McHugh and Jordan Rennert, the film was shot over six years – pre-pandemic – at conventions around the U.S. including Anime Expo, San Diego’s Comic-Con International, Atlanta’s Dragon Con, Stan Lee’s last L.A. Comic Con and the World Cosplay Summit in Nagoya, Japan. The documentary dives deep into the world of Cosplay and taps into the psychology behind this art of self-expression, demonstrating how Cosplayers can transform and expand their confidence and perceptions of themselves. In the film, Cosplay is seen as a supportive avenue for gender exploration, as well as a welcoming community for all, including neurodivergent and disabled people.

“While those outside the Cosplay community may view Cosplay as “playing dress-up,” Cosplay has become so much more than that,” shares co-director Jonathan McHugh. “It encourages self expression in a uniquely inspiring way. In addition, it allows people to have a creative avenue to discover parts of their identity they may have been unaware of before.”

“By Cosplaying at conventions and on social media, the artform allows people to have remarkable transformational experiences,” adds co-director Jordan Rennert. “We made this film as a tool for Cosplayers to help their friends and family understand what their love and this art form is all about.”

“We’re proud and excited to bring Cosplay Universe out into the world,” says Abramorama’s Evan Saxon. “It’s a perfect example of the kind of tribal films we love to handle, one that we know the community will respond to enthusiastically and in great numbers.” 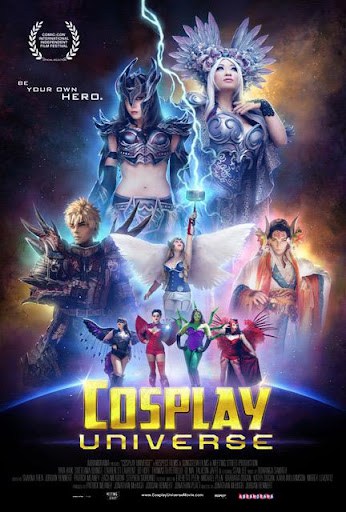 Also highlighted in the film is an overview of the World Cosplay Summit, where we follow the twists and turns within the competition for the gold between the Italian and Mexican teams. The story also showcases the ever-evolving push for more comprehensive designs, as cosplayers push each other to make jaw-dropping engineering feats, such as the 9-foot-tall Hulkbuster costume by Extreme Costumes.

Rennert and Meaney are acclaimed for their work in the comic book documentary space, where they have covered legendary subjects such as Grant Morrison (“Talking With Gods”), Neil Gaiman (“Dream Dangerously”), and the origin story of “Chris Claremont’s X-Men.” They have received numerous awards for their work over the years in the comic community, including an acknowledgement for Best Documentary at the Comic-Con International Film Festival for “She Makes Comics.” They are also known for their indie films “House of Demons” and the upcoming musical romance “The Brink Of.”