A seven-part serial novel, six chapters and a prologue, Batman RIP is a passion play without a betrayer, a death of… story that does not kill the protagonist, a mystery that ends unsolved. 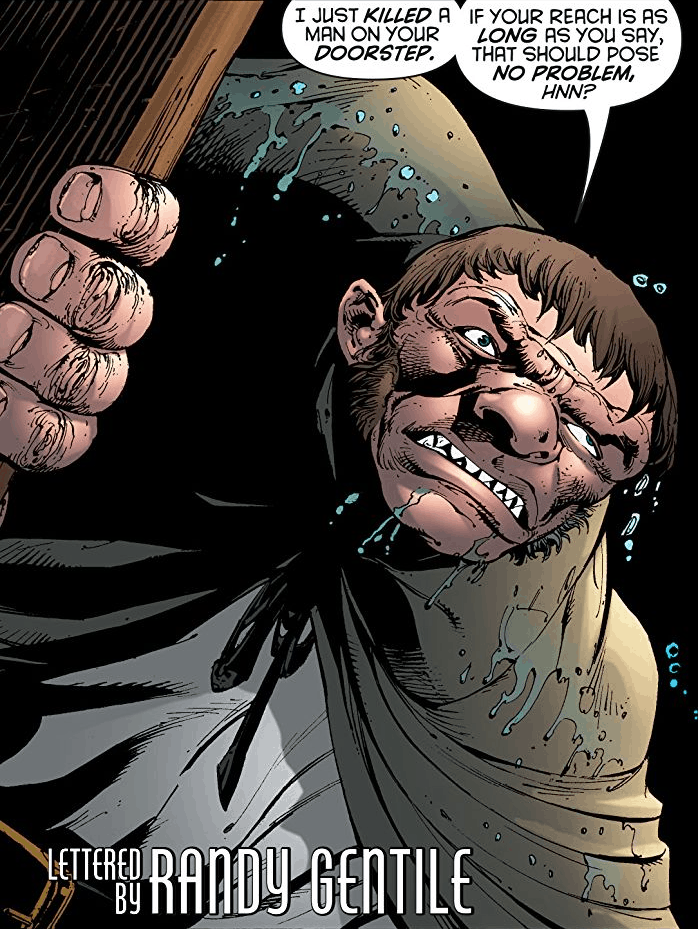 From the beginning to the end of RIP, the central mysteries are unsolved. Who is the Black Glove? Who is Dr Hurt? How long has this been going on? What, ultimately, is their plan? We have hints, but the hints do not add up. We have clues, but the clues are easily misinterpreted.

Batman, at best, survives this encounter. He solves little, and what he seems to solve, is just as easily read as Batman lying to save face after the facts have come to light to everyone.

We will have conclusions, later, to some of the mysteries, some of the who and how-dunnit of RIP, but only in comics serialized a year or more later. Most significantly, even when we have our answers, they do not come from Batman’s deductions or efforts in RIP. Batman, in RIP, solves almost nothing, foils almost nothing.

In this seemingly edgy, hardcore Batman crime story, Batman is dressed in garish bright colors, laughed at, and his potency is represented by an impish, big-headed toy-looking pixie, punningly renamed from Batmite, to Batmight. 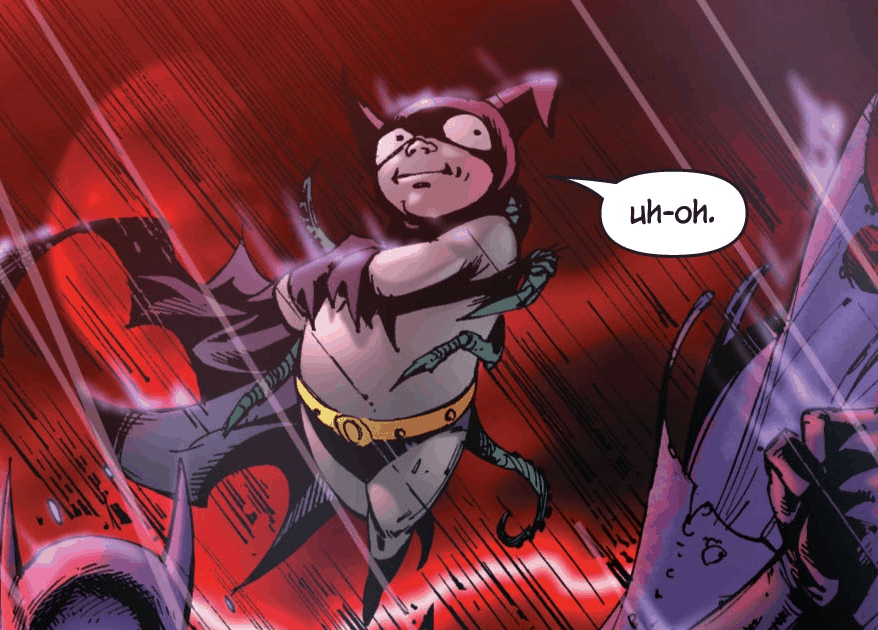 Even, “Who are the Batman and Robin in the prologue?” a scene which takes place six month after the main set in the present narrative, is not answered for months, and, again, not in this story.

Batman dies before Batman RIP begins. RIP is Batman, resurrected from being clinically dead of a heart attack. This weird creature of the night, the Batman, is a dead man returned, swooping in like a nightmare, but reduced quickly to a man scrabbling in the dirt, before he is buried.

Batman in the Underworld is the title of the second chapter.

The story opens with a Batman (and a Robin) “six months later,” which is implied, from the very beginning, not to be Bruce Wayne, our Batman and the Batman of RIP. 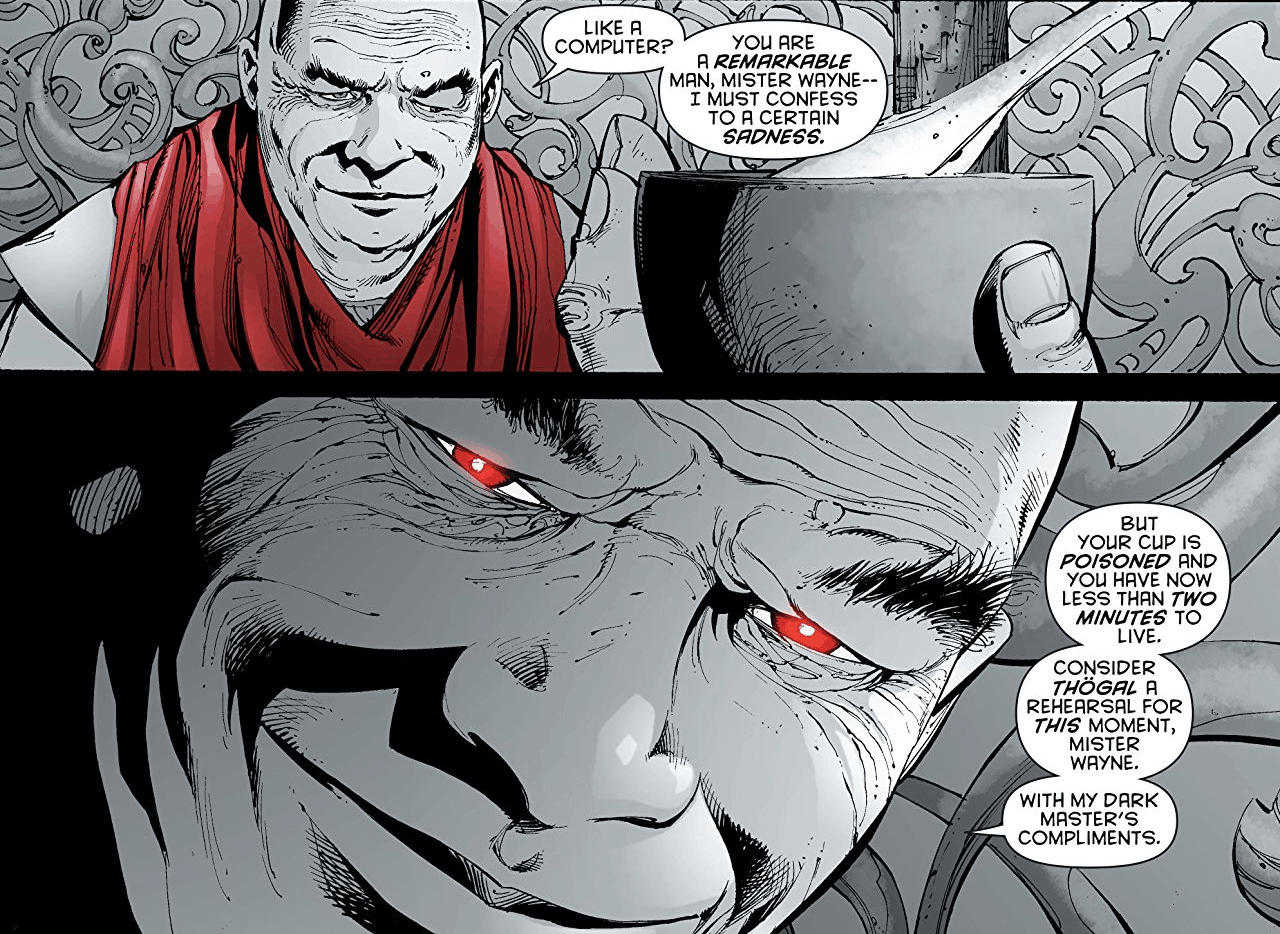 Writer, Grant Morrison would point to the 1960s Batman tv show and the early 90s, Twin Peaks, as touchstones for the style and pacing of his Batman and Robin and Batman Inc, which this immediately precedes, but RIP truly embraces both shows’ motifs and aesthetics in as simple ways as duotone curtained rooms and twelve to twenty theme-costumed goons for every supervillain.

There are callbacks to 1950s Batman comics, an 1891 novel, the ouvre of the director of the original Batman movie serial, including the mysterious young death of  of actress, Patricia Farr. Characters, like the aforementioned Batmite make a rare in-continuity appearance, stalwart gentleman’s gentleman, Alfred Pennyworth as the big bad is teased by dancing flamenco all around his mid-Century role as nigh-cosmic monster crime king, the Outsider. But, no comic before or after RIP is “required reading.”  You start RIP, you end RIP, and you have a full and rewarding story.

A dense fast read, RIP feels like you should read it quickly, zipping page to page, but every panel is strong with clues, cues, and information. RIP is an emotional rollercoaster, has multiple set pieces, puts Batman through at least four disguises, including homeless addict and laughing unshaven red-and-yellow-costumed violence junkie with a baseball bat. 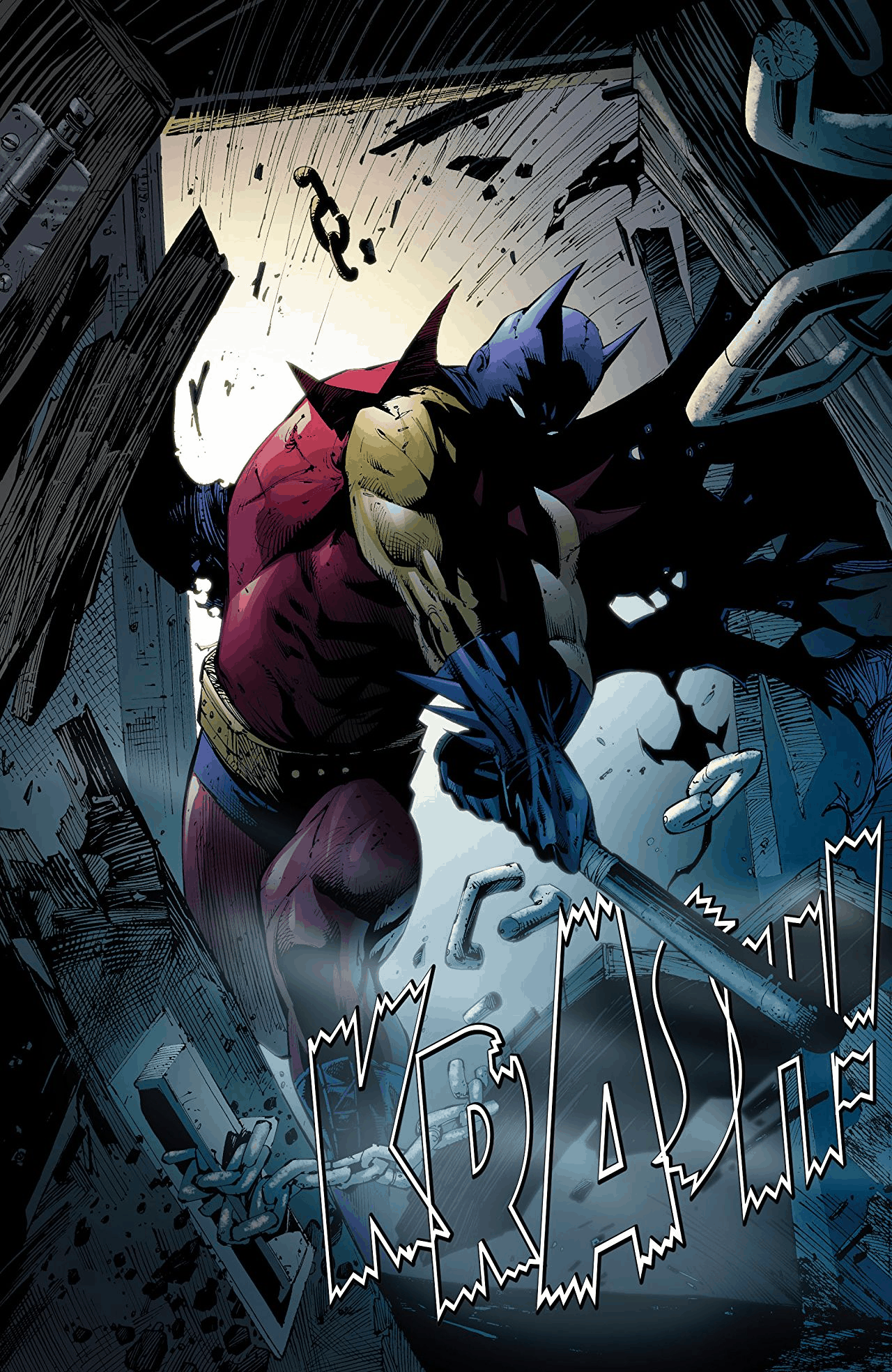 Penciler, colorist, inker and writer are trying different techniques nearly every page, changing pacing, patterns, and motifs without every stopping or slowing down the story and our instinctual reading speed.

The visual verve that Tony Daniel, Sandu Florea, and Guy Major bring to RIP is sadly easy to forget, in light of the cracking script, the wonderful writing. It is brilliant, evocative, stylish work. The ferocious style exhibited by Major, Daniel, and Florea is designed to excite, to be big and epic, and consistently intimate, miniaturizing, controlled, restrained. Their indulgence in the thematic and plot-necessitated black and red motif is only one thread in a tableau of techniques that make RIP the colorful equivalent of a demon in a very small box, thrashing at the unseen, unlit walls.

RIP’s entire duration is Batman being placed in a series of tighter and tighter boxes, from his brief death days before the story begins, his month in meditation in a cave, rehearsing death, months before that, to his descent into his Batcave, his rough days, an addict, homeless on the streets, regressed to the back of his brain while a madman drives his body, he walks willfully into a lunatic asylum (or, if you prefer, a hospital), chased through his childhood home, boxed and buried like a dead man, plunged beneath the stormy sea. 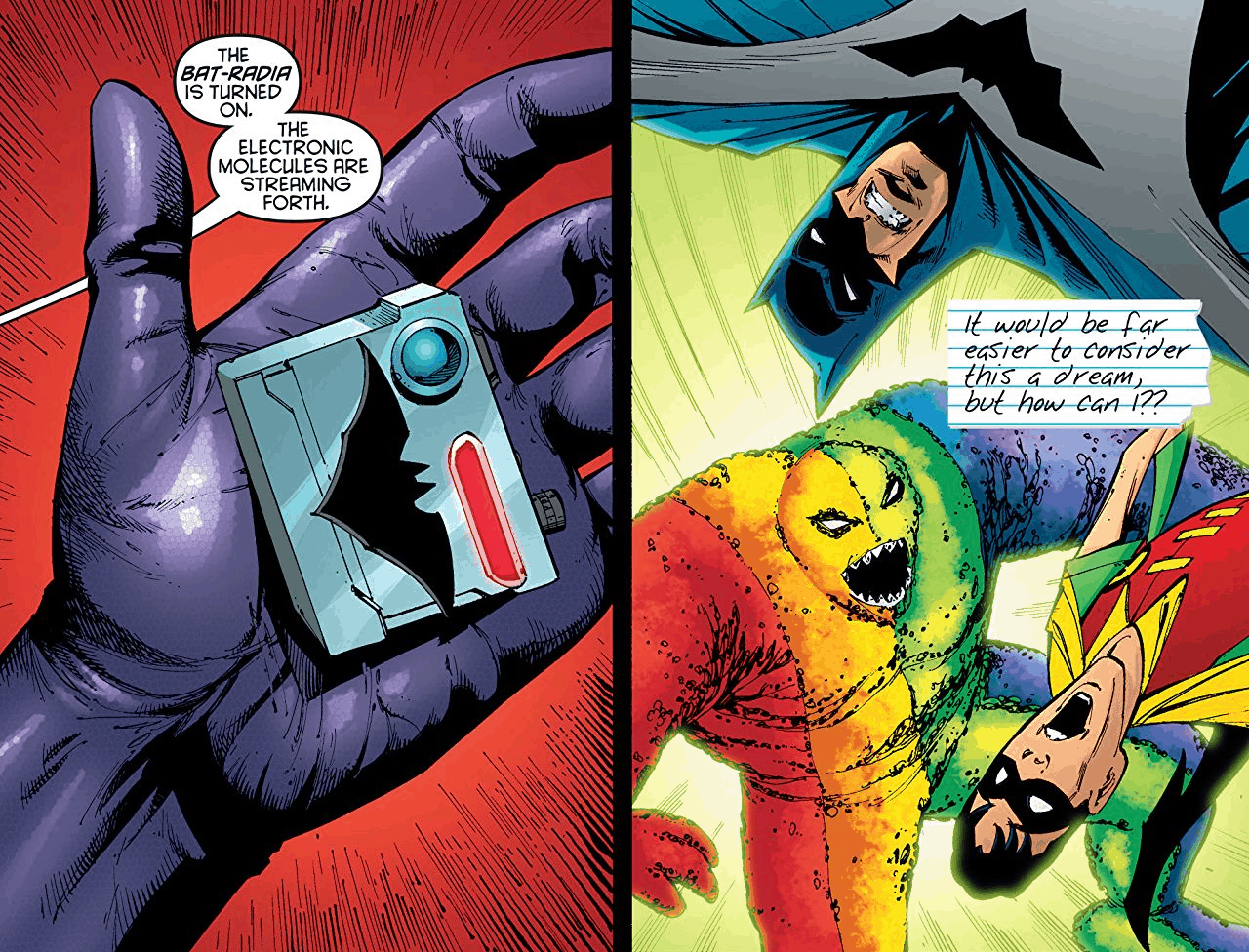 The visuals are awash with the neo noir staples of neon at night, reflections in rain, grimy pavement and the piled ages of a 30s’ camera’s poor capacity of dealing in the absence of bright light and the stagey, dominating backdrops earned from expressionist cinema. Batman has been a movie character even long before his first presentation in cinema, in 1943. You can show Batman, use Batman in any medium, at any ratio – he is very flexible – the concept of Batman is dynamic even when the design is not – but in any medium, any story or representation, Batman will owe a debt and take remarkably from movies, the tics and language of film.

Hurt is the Batman villain of our age, because for all the Batman Who Laughs or Ben Affleck branding people in movies, Hurt is everything Bruce wants to be and everything he might horrifically be.

Dr Hurt is nearly all of Batman’s classic, traditional anxieties. He is so much a master criminal that he is crime. He is the sad, black sheep Wayne, cared for in a mental hospital. Rampant liar. He is Doctor Thomas Wayne, evil and lying father. He is said to be far wealthier than Batman, a wealth that cannot run out or be beat by Batman throwing his own fortune into crimefighting.

Dr Hurt knows Batman’s greatest fears, his most intimate secrets, and has attacked and stopped him, bewildered and brutalized him, physically and psychologically, even spiritually.

Dr Hurt is also farce, a sad satire of Batman. Hurt is a wealthy, agitated Wayne who goes out and brutalizes less-equipped criminals with mental health issues. Yes, a vigilante is a criminal. Batman is, except when officially deputized, a tolerated criminal.

Batman is initially delayed by beating him, drugging him, leaving him amnesiac, broke, high, riddled with post traumatic stress, and jonesing on the streets of Gotham. Robbed  of his wealth, health, education and family name.

Batman is saved by what we only later realize is either a ghost or, more likely, a figment created by his mind, the way his Batman of Zur-En-Arrh identity is, or the Batmight, the talking gargoyles. Honor Jackson, black, broke, helpful, the homeless man who knows stuff, was criticized quickly, particularly at the old Barbelith boards, for being a tone-perfect magical negro. 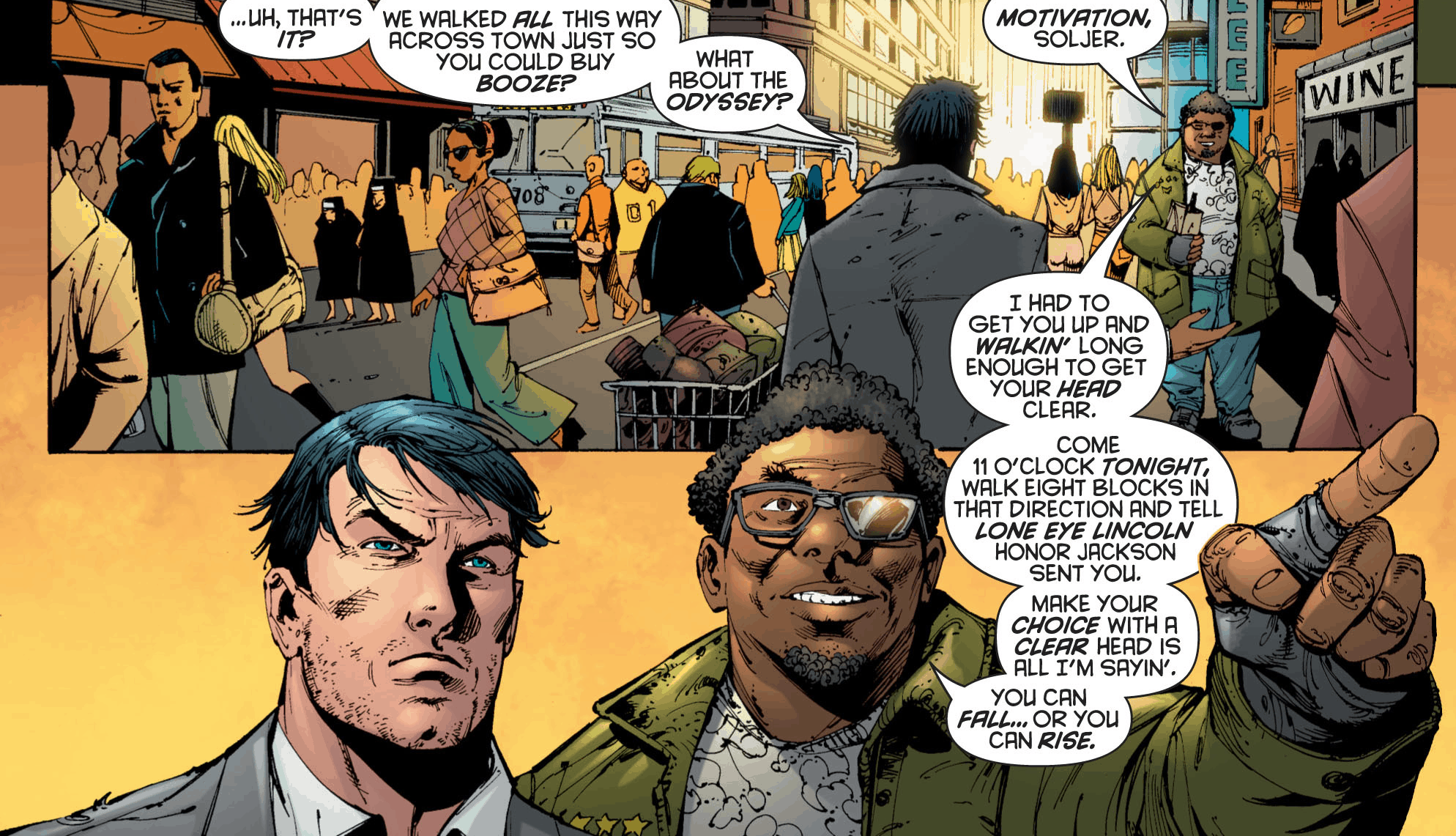 Honor Jackson is a magical negro that Batman, billionaire vigilante Bruce Wayne, has made up in his head. Based on a real man, who Batman encountered very briefly, his condition, motives, patois are not (entirely) slips by the authors, but an indictment and enlivening of Batman’s class perspective.

Long after RIP, Hurt tells Batman to, “rot in purgatory,” and, as Neil Gaiman will write in his own story that follows up on this storyline and its immediate followup, Final Crisis, “The reward for being Batman is, you get to be Batman.” Batman is a recycling of pain. In another Morrison comic, Batman is framed as someone who, more honestly than fighting crime, is a person who deliberately gets beat up every night to spare other people being hurt.

To keep people from being hurt.

Don’t make me belabor this point.